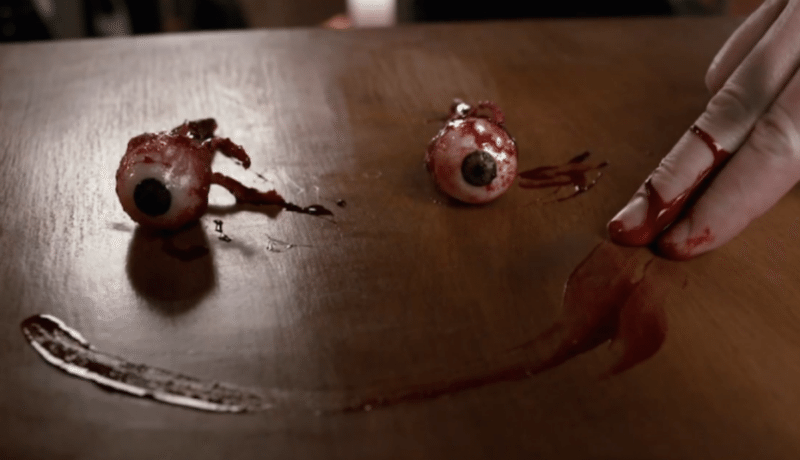 There have been only a few times in my life that I was faced with a puzzling paradox while watching a new television show: I loved it, but it was because of how dark and depressing it was. THE MAGICIANS is that kind of show. Within the first few scenes of this brilliant adaptation of Lev Grossman’s bestselling trilogy THE MAGICIANS, we’re thrust into a world of questionable morality, blatant themes of depression, rampant self-loathing, and even levitation mid-coitus. Honestly, it’s the truest adaptation of any fantasy novel I’ve ever seen—it even gives JK Rowling’s HARRY POTTER film adaptations a run for her galleons. But since the tone of THE MAGICIANS hinges on something so doom-inducing, it’s safer as one of my personal little treasures, lest I reveal how depraved my own psyche is.

INTERESTED: Don’t want your college life to end up like the students at Brakebills? Click here for an article on staying above water in the world of academia!

THE MAGICIANS is a Syfy series based on the new-adult fiction books best described as Harry Potter with an existential crisis and a serotonin imbalance. It explores the children’s fantasy genre itself, and all the expectations that we, as people, place on these magical worlds we idolized as children. And it does not pull any punches. It is these freely thrown blows that make me apprehensive about sharing my love of the show with other people. 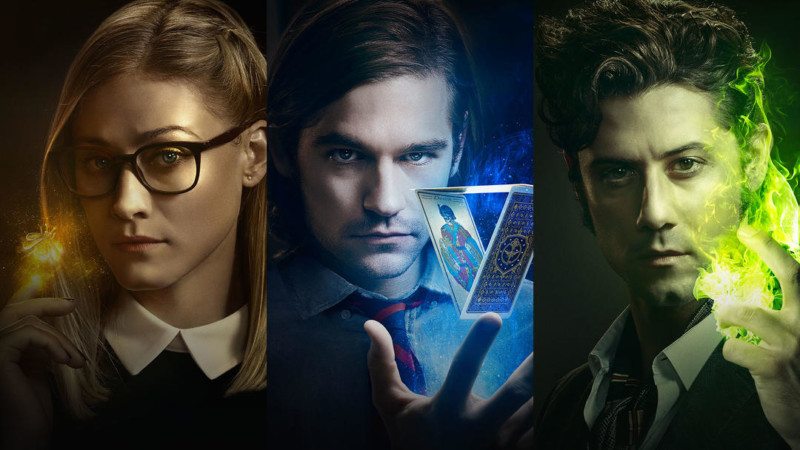 THE MAGICIANS has all the ingredients for cliché and genre-specific excellence in this post-Harry Potter society, but as the series opens and displays Quentin Coldwater in a mental hospital, discussing his depression and the haunting illusion of greatness he’s desired since reading his childhood books, I realized this tone wasn’t for the BUFFY THE VAMPIRE SLAYER fanatics, or the GAME OF THRONES stans. This show was for the nerds who write up HARRY POTTER fan theories late at night or those who took the time to learn the Elvish tongue of Tolkien. This was for the kids who laid in bed throughout high school waiting for an owl to peck at their windows with a letter in its beak. People like this would find their way to this show without recommendation. Why? Well, because THE MAGICIANS is for the fantasy bibliophiles who were promised an adventure in their youth, but never got one.

In this series, magic is a futile craft, and it is shockingly depressing to watch the characters fumble through their lessons while slowly realizing that magic will never fix all their problems. On top of that, a user’s magic will only grow with painful experiences.

INTEREST: Are you as done with humanity as THE MAGICIANS seems to be? Click here as we investigate the need for humans in other fantasy settings, particularly RPGs!

In one of the earliest episodes where I briefly considered suggesting the series to a few friends, I was met with a scene that confounded me. After seeing it, I had to judge my own personal tastes since this episode, in particular, made me feel unclean, both because of its subject matter and the fact that I liked the episode. The episode’s darkest scene was essentially this: In an attempt to give a puppy longevity and eternal cuteness, students accidentally riddled the pup with every possible disease known to canine-kind. Quentin then chooses to experiment on the puppy in a half-cocked attempt to cure cancer forever and killed the poor thing in the process. It’s horrifying, but even this wasn’t what hit the episode home for me as one of the darkest things I’ve ever seen in a fantasy show. It was what followed this event:

“Yes,” began Dean Fogg as he chastised Quentin’s foolishness. “You can save someone’s eyes—you can save someone’s life. But you might alter their soul in the process.” To which Quentin exclaims something many viewers had already started wondering after the fifth morbidly depressing incident on the show: “Then what is the point?!”

And Dean Fogg explains the point in one exasperated breath: “We can fix some things, so we fix what we can.”

It’s an answer that is truly horrifying because of its implicit suggestion that magic really has no point other than making its users feel powerful until it could possibly be of worth. I wouldn’t share such a depressing sentiment with my worst enemies, let alone people I want to socialize with.

CLICK: Abusive relationships in media are so common that they have their own trope. Click here to see us analyze its place in entertainment!

That’s not even the tip of the magic wand. We also see the character Julia mind-meld with a wonderfully brilliant magician trapped in a coma. After causing the death of a fellow hedge witch and almost trapping her best friend in a nightmare world, she ventures into rehab to escape magic, just to find her redemption waiting for her in a kind comatose woman. After a long episode on forgiveness, Julia then nonchalantly offs her new bestie in a sobering assisted suicide.

And then there is the “The Writing Room” episode. The plot centers on a haunted house where the ghosts of two children are forced to relieve their gruesome murders at the hands of a pedophile over and over each night. Though Alice would like to save them, there exists no magic to relieve these ghosts: she is powerless. The ghosts can only be silenced so that all of this harm can happen where no one can see it.

Yet this dark writing isn’t the only horrifying aspect of this series that warrants a second thought before sharing your fascination with the show with anyone—it is the production of the series as well. 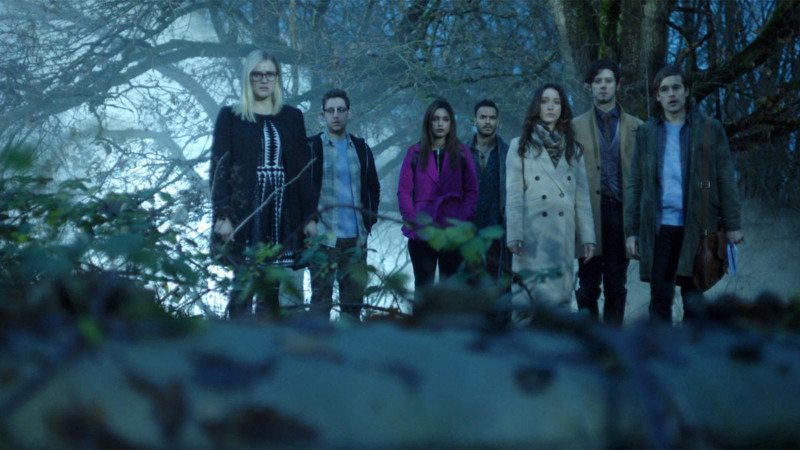 THE MAGICIANS suffers from a bad case of Hollywood prettiness. The cast is far too beautiful to be taken seriously in the subject matter, but it also creates an ominous sense of safety. The brain deactivates the expectation of the gruesome and depressing and instead replaces it with prettier thoughts because, well, it’s hard to expect bad things to happen to good-looking people. In the novels, the same characters are barely attractive, “homely boy-next-door,” academic types— total opposites of the twenty-something part-time model hipsters we see on SyFy.

Yes, the series in itself is a critique on the innocent expectations we place into the fictional worlds of our childhood, but this message is muddled by seeing beautiful people dealing with ugly situations. Not to say that “beautiful” people can’t feel this depression, but even their clothes never seem disheveled, let alone their psyches. While these characters undergo severe psychological trauma, there are never any concrete details to implicate their pain. It somehow ruins the underlying theme because the show still feels like it is saying, “Well, all of these things are bad, but at least we’re still beautiful.” 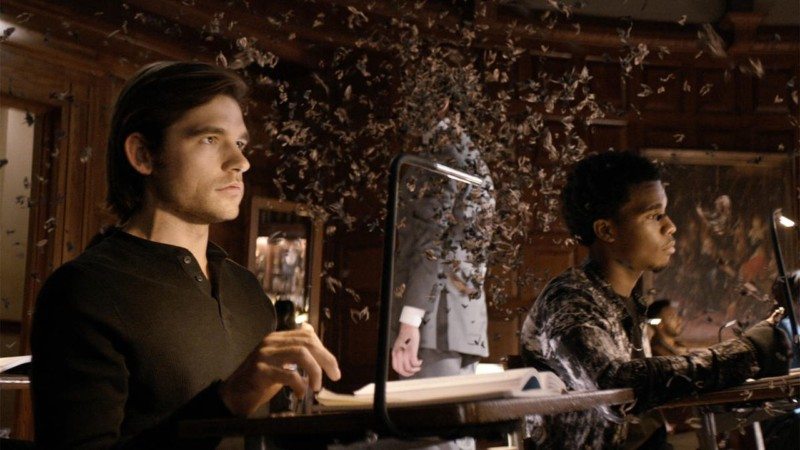 Even the filming of the show is visually odd. The show is shot in a shade of black-tinted gray that emphasizes the fact that, in this world, there can be no happy endings and all power has the price of personal happiness. Even in the scenes that are shot in this disgusting, fluorescent hue— particularly, the last scene of “Unauthorized Magic” which showcases a classroom void of any and all happiness from the students—there is a sense of intriguing emotional detachment everywhere. In this scene, even the professor seems completely distanced from his own lecture on some profound mystical enchantment. It makes everything far more depressing.

However, as frustrating as they sometimes are, all of these production choices fit with the overall theme of the series. THE MAGICIANS does everything it takes to undercut your sense of wonder, that even if the grass is greener on the other side, it probably still smells like shit—and worse, you’re going to be mugged as soon as you get over that fence and it’s located on a haunted Indian burial ground. You won’t feel happy watching THE MAGICIANS. You’ll feel alive, and even that’s only because you’d need to be alive to feel this much pain.

Yet again, I ask in what world would I subject anyone I care about to this kind of pain unless they get it? And that “it” is the mystifying question that hangs in the back of every YA fantasy lover’s mind: Is this world all it’s cracked up to be? Are all bad guys telegraphed as the big bad men who ruin everyone’s happiness? And can we all, as complex humans, truly be sorted into only four distinct categories which encompass our entire potential and preferences? (And would Hogwarts really employ such an emotionally abusive urban terrorist like Snape without incurring the wrath of some kind of PTA-style lawsuit?)

READ: Find this analysis on THE MAGICIANS intriguing? Click here to see how we analyze the symbolism of one of entertainment’s greatest heroes, Thor!

Really, it’s the human need to poke holes in the reality of fantasy that drives this series and provides the sinister vindication that our pessimistic alter egos were right after all: that there is no magical adventure where all of our problems are solved in one story arc. That magic is just as mundane, twisted, and savage as our everyday lives. The innocent are violated on a carpet from Target, and the bad guys are just good guys who’ve been through some shit and are now acting in their own sense of gnarled self-preservation. 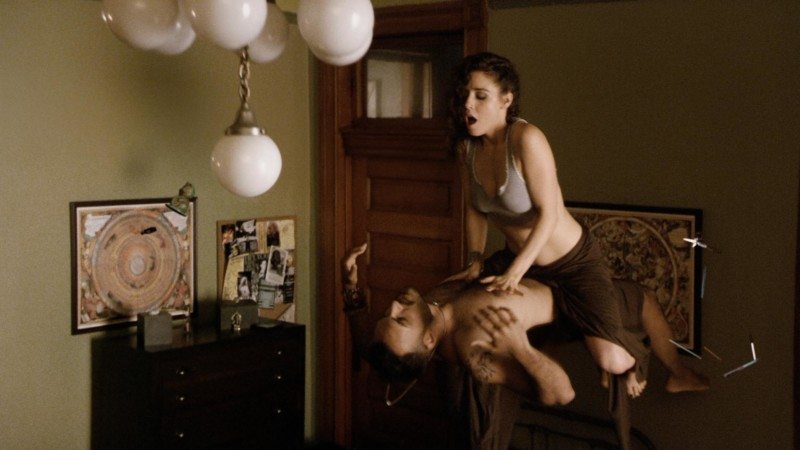 This show ruins all sense of childhood wonder for the YA fantasy worlds we held dear, from the glory of Narnia to the manic depressive truth of what Harry Potter would really be in a magical school—because let’s be honest, Harry was never explicitly good at magic.

Finally, the main reason I probably wouldn’t share this series with anyone is because of the tragedy this show invokes without actually saying it: in this world, no one seems to believe in magic. Yeah, they can use it. But there’s no love for it. It’s the same way people feel about gravity. It’s there, we know it’s there, but who really cares about gravity or feels happy when they jump up and are immediately pushed back down? Seeing these characters engaged in magic is like seeing an undergrad run through trigonometry equations: it’s just a race to get to the solution. Keeping in mind that these characters exist in a universe where Harry Potter novels are real, their lack of belief becomes tragic. Occasionally, this tragedy gets metafictional, where they compare themselves to the fantasy they’ve grown up with—and the end result is like reading a suicide note. 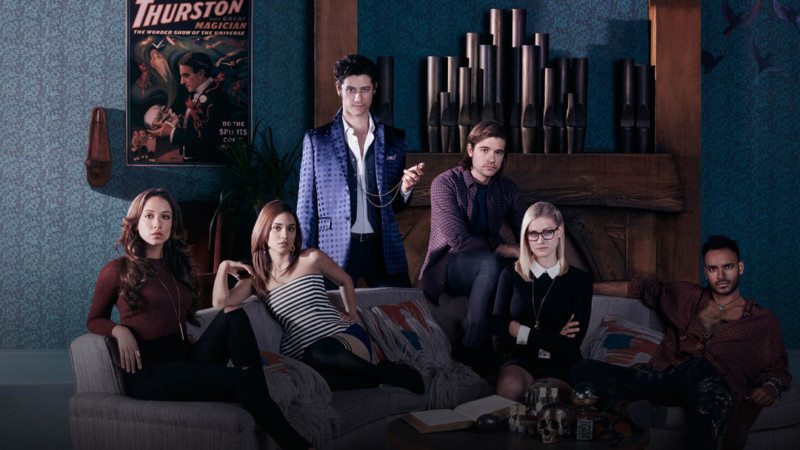 To share this series with someone is to share this very dark reality: some fans have a very pessimistic attitude towards their own sense of wonder—which isn’t something that is felt by all fans. Though the aforementioned production issues are troubling, shows like MERLIN have had far worse production in later seasons but found themselves with a strong cult following and a prominent fandom on Tumblr. The difference is that the sheer tone of depression is likely to ruin even the most devout fantasy fan’s outlook on the entire genre. Though I would like to say the future of the show is bright, the novels can go nowhere but darker. Worse, unlike GAME OF THRONES, the novels were only a trilogy and the show has already run through the first two books in just one season. In season 2, we can look forward to two possible storylines including the end of magic and a war led by Queen Janet (Margo). Both situations are honestly the most positivity the series has had in all three books, so I probably won’t be recommending this series to anyone who isn’t ready for severe traumas anytime soon.