There has always been an undeniable fascination with black female characters in the comic book community. Female figures such as Vixen, Storm, and Amanda Waller are among the most prominent women of color in comics who each represents strength, courage, and pride in her own individual manner. Behind the portrayal of these influential black women, however, there’s an inconspicuous backdrop crafted by historical racial ideologies.

LISTEN: Is Storm the most recognized black superhero? Tune into Episode 63 of our podcast!

The range of personalities portrayed for white women in comics is clearly more vast in variety. This disparity is exemplified through the multitude of rich, lively white female characters. While the assortment of white women in comics spans from vibrant, comical characters such as Supergirl and Harley Quinn to more bold or sleek characters such as Wonder Woman and Catwoman, there has yet to exist an equal spectrum of diversity for black female personas. In fact, among most notable black women in comics, there are traits that often cement them as characters of the same tone. Overt fierceness, prudence, and dignity are usually central characteristics that define black women in comic books. The high discrepancy of varied personas between white female characters and their black female counterparts also reveals a compelling distinction of how comic book creators perceive both white and black women beneath different lenses. 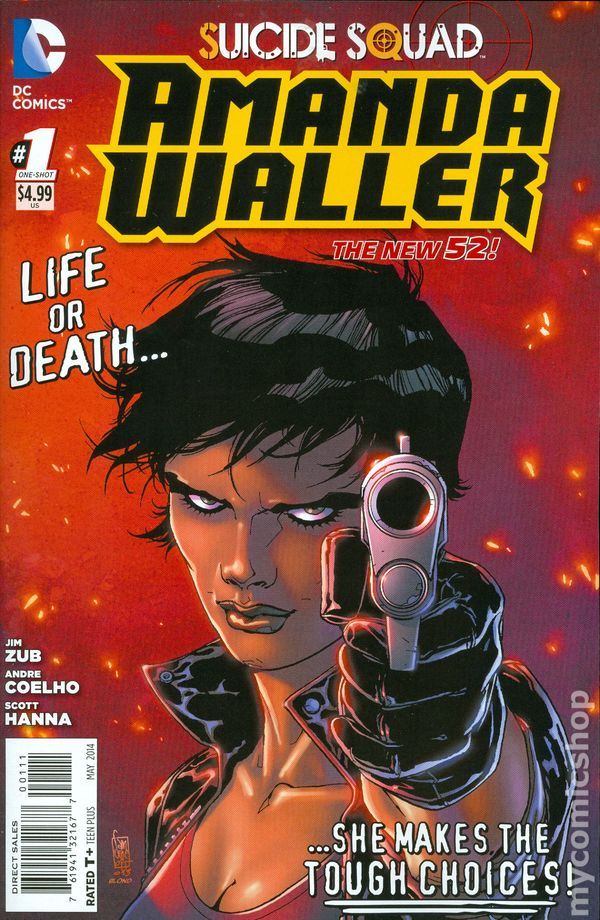 So why, in arguably the most progressive time in U.S. history, is there not only a continual scarcity of featured black female characters but also an uninspired effort to broaden their personas? Some of the earliest accounts of European exploration lend more insight into understanding the reasons behind such issues.

READ: Discover more about the Portrayal of Women within a Diversifying Gender Media!

Jennifer L. Morgan’s “Some Could Suckle Over Their Shoulder”: Male Travelers, Female Bodies, and the Gendering of Racial Ideologies, 1500-1770, published in The William and Mary Quarterly (Jan 1997) is an exquisite analytical article that explores early European patriarchal perception, and its influence, on modern day black female ideology. Morgan’s scholarly work reveals not only the current stigmas that continue to follow women of color today, but also their permeation into how the black female is portrayed in modern media, such as comic books.

Though Morgan’s article devotes a majority of its content to explain how early accounts from European explorers in Africa interpreted the physicality of African women as inherently savage and demonic, its other most apparent assessment delves into the differentiation between women of color and European women through the white male perception.

Amerigo Vespucci, an early Italian explorer, characterized women of color by expressing that “[The] women are very fruitful, and refuse to laboure al the whyle they are with childe. They travayle in maner withoute payne, so that the nexte day they are cherefull and able to walke. Neyther have they bellies wimpled or loose, and hanging pappes, by reason of bearing manye chyldren” (Morgan, 171); here, Vespucci genuinely expresses praise for the strength indigenous women of color displayed during pregnancy and childbirth. As Morgan additionally evaluates: “His admiration hinges on both a veiled critique on European female weakness…” (171). Vespucci’s account is valuable in indicating a concept that explores a unique discovery of fortitude found in women of color not recognized within the European woman. This adoration for female vigor by European males has become an essential aspect in the representation of black women today. 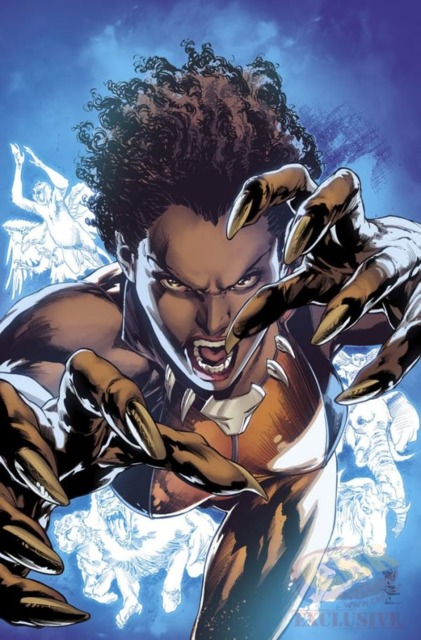 Ironically, many accounts expressed by European explorers admiring the strength of women of color are imbued with drastic contradictions, and reverted quickly through contrasting narratives – narratives expressing disgust for sexual behavior they deemed as monstrous.

READ: Interested in learning about “Misogynoir”? Find out the racism and sexism black women face in television!

The discrepancy between respect and disgust for early women of color undoubtedly stemmed from a fear held by European male explorers, but not one so much based on physical sexuality. While many early Europeans associated the image of large sagging breasts as threatening and grotesque, so much so that apparently many “Medieval images of female devils included sagging breasts as part of the iconography of danger and monstrosity” (Morgan, 170), these European travelers certainly possessed an undeniable physical attraction to women of color.

This physical attraction is profoundly evident within many early European accounts seeking to demoralize the image of women of color. The medieval wild woman “…was believed to disguise herself with youth and beauty in order to enact seduction that would satisfy her…”, according to Jennifer L. Morgan (170). She continues to explain how “The shape of her body marked her deviant sexuality; both shape and sexuality evidenced her savagery” (170).

Therefore, it can be insinuated that what repulsed early European men from women of color was not physical sexuality, on the contrary, there was an undeniable allure to their appearance. Rather, what early European men deemed as vile derived from a fear acquired through the observation of pride, power, and authority shown by women of color. In The Travels of Sir John Mandeville, Mandeville recounts his trip to Ethiopia, explaining that even in nakedness “the women have no shame of the men” and “when [women] have children they may give them to what man they will that hath companied with them” (Morgan, 170).

Sir John Mandeville’s Ethiopian accounts, also further explained by Jennifer L. Morgan, reveal the true nature beneath the contradictory perception of colored women by early European explorers. The fact that early indigenous women of color bared no shame to nudity and displayed a freedom that challenged European patriarchy instilled a threat to visiting European men. In doing so, a persistent ideology surrounded by excessive adamancy, dignity, and aggression converged over the black female persona. 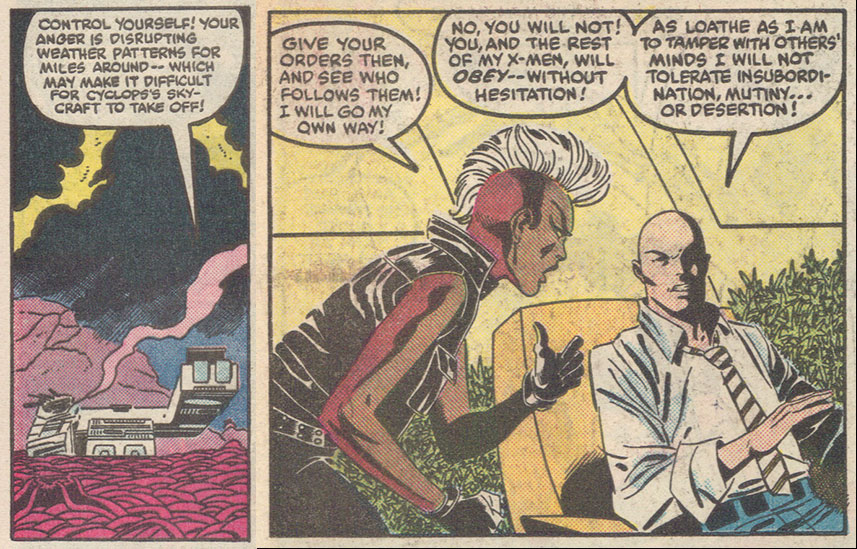 This initial European seed of perception has come to grow throughout a history of colonization and imperialism. Most importantly, it has managed to endure despite new progressive mindsets about race and gender. The absence of diverse personas for black women in comics is evidence of the lasting effect of early European accounts. Such effects are predominantly evident when analyzing fan favorite female characters.

Storm is the perfect embodiment of her name; she exudes nature’s beauty, yet harnesses the potential of its devastation. Like lightning, Storm possesses both beauty and destruction. Although these characteristics have shaped her into a national icon, they remain symbolic principles held by early Eurocentric explorers. Regardless of Storm’s position as one of the most powerful beings in the Marvel Universe, her tutelage under Professor Xavier shadows the early European idea of having to tame the threatening power of the wild black woman.

READ: Want to know more about Amanda Waller and her Suicide Squad? Check out our latest review for JUSTICE LEAGUE VS SUICIDE SQUAD #6!

This white patriarchal perception is more evident with the depiction of the increasingly popular, Amanda Waller. Garnering a reputation as one of DC comics’ most ruthless and cut-throat characters, Waller demonstrates a continual threat to superheroes and villains alike that coincides with the dangers early black women represented to European patriarchy. Waller contains many attributes that most early European explorers feared, such as characteristics of authority and shamelessness recorded during Sir John Mandeville’s trip to Ethiopia.

Amanda Waller’s command over some of the vilest villains in the DCU is testament to her strength. Similar to Storm’s restraining role as Professor Xavier’s student, Waller falls under the checks and balances of Gotham’s Cape Crusader. Amanda Waller and Batman’s adversarial relationship has progressed throughout various story arcs within comics, television, and cinema. Establishing the Dark Knight as the enemy of DC’s most uncontrollable black female character is intriguing indeed. Beneath his cowl, Bruce Wayne is a profound symbol of white patriarchy. Under the uniform, he represents the inherently wealthy, corporate owned, white male in power. 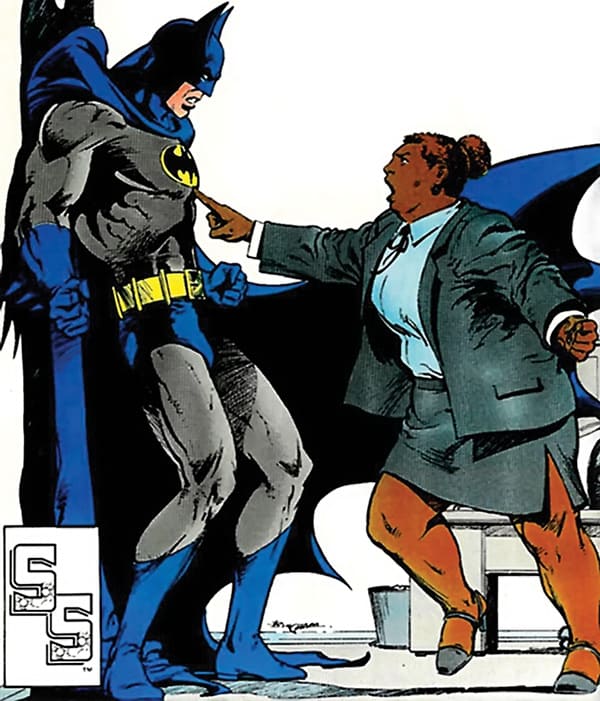 With origins alluding to her career as a model, Vixen’s sexual allure has become an essential part of her character. So have her animalistic instincts and capabilities. This is a combination early European males would likely have described as savage. Her name further displays this concept. “Vixen,” is defined as both “a shrewish, ill-tempered woman,” and “a sexually attractive woman” by Merriam Webster’s online dictionary. Vixen is, therefore, by definition and by character, the epitome of what White patriarchy fears most – an attractive, independent, and prideful black woman. 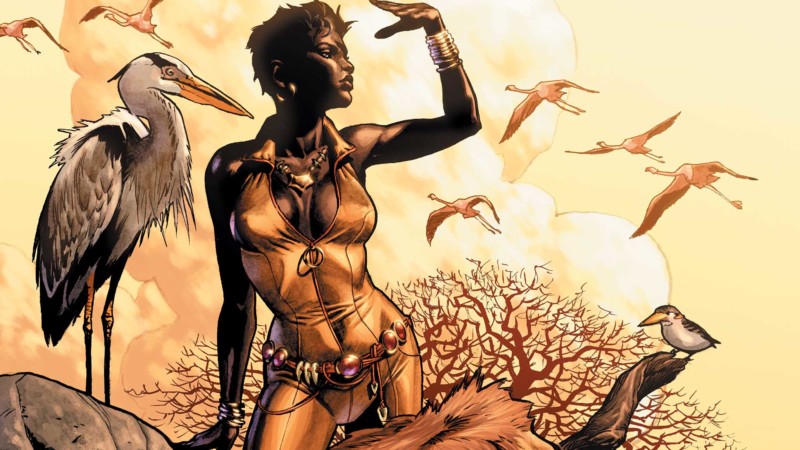 The problems caused by early European explorers that contributed to the general persona of black female characters are ones of complex depth. Yet, it’s necessary to realize that this ideological backdrop does not continue with its origin of malicious intent. In fact, the most significant acknowledgments to be made should be the unceasing influence of such ideals, its existence within the subconscious of white male creators, and its confinement to the expansion of diverse personalities within female heroes of blackness.

Iconic women such as Storm, Amanda Waller, and Vixen are undoubtedly incredible characters who continue to captivate and inspire stories for young female fans to follow. Their long-lasting popularity and appeal within an industry dominantly white and male is evidence of their strength as characters. However, perhaps with the continuing diversification of more comic book characters, the range of the black female persona will expand – changing the ideological backdrop created by early European explorers.