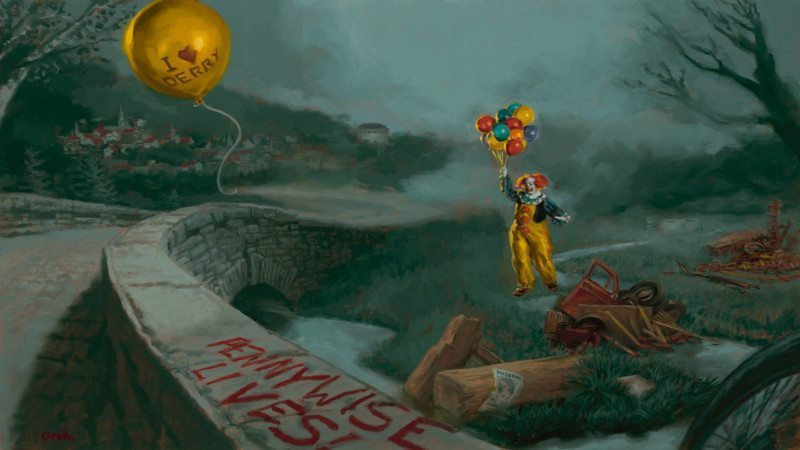 Over 30 years since the book was published and 25 years since the mini-series aired on ABC, Stephen King’s IT will be seeing another adaptation. This time IT will be seeing a big screen adaption, with Director Andy Muschietti bringing a kid-focused part 1 in the summer of 2017, with a second feature following the adult narrative after that. In the years since it was released in 1986, IT has become one of King’s most celebrated novels, along side his DARK TOWER series and THE STAND, to name a few. It is also a behemoth of a work, complete with fully illustrated characters and situations. It is a book that would be perfect for a graphic novelization. With the upcoming motion picture, the time is right for King’s magnum opus to see a interpretation in comic form.

Just like THE STAND and THE DARK TOWER series, IT is a massive undertaking. Sitting at over a 1,000 pages long, IT is King’s largest written piece and, just like King’s other works, it is filled to the brim with countless side stories and anecdotes. Even with a planned two films, it would be impossible to give the full mosaic that King paints in the town of Derry, where IT takes place.

To say each main character is fleshed out is an understatement; early on in the novel, we are given the history of each of the 7 members of the Loser club. From Bill’s trials and tribulations in college writing classes, to Stanley’s ascent up the accounting corporate ladder, to Eddie’s courtship and marriage to his oversized bride, every member is given their due biographies, something that would be impossible to fit into a film.

Each of the 7 losers success is a main component of the “destiny” that is interwoven through out the novel, and a graphic novel can show this flow seamlessly. While many films aren’t able to get to the themes of a novel, a graphic novel can keep those core components, thus keeping the spirit of the novel. Each of these characters’ success can be tied back to IT’s influence, something that is hard to illustrate in a film, but can be fully realized in a graphic novel.

Not to be left out, King gives each and every side character their own written history. From Stan Uris and Eddie Kaspbrak’s wives, to Bill Denbrough’s creative writing teacher, to Al Pacino, each character has their timelines written out. These constant characterizations extend the novel to its gargantuan size, but also give the entire story a deeper, more personalized feeling.

That is something King has always done in his stories; no character is superfluous. All secondary and peripheral characters in IT have some connection and importance to the plot. Cutting out those characters in a film adaption reduces the impact of the original novel. Keeping each character and their importance would allow a graphic novelization more room to fully flesh out the novel.

The town of Derry is a character unto itself. The history of Derry – from the early 1700’s when the first Irish settlers appeared to the mid 1980’s where a homophobic attack occurs – is as fleshed out as any character in the book. This history is nearly impossible to show on screen without turning into a pseudo-documentary, but a graphic novelization would be able to explore the dark, twisted history that King envisioned.Entire sections of the novel (taken from Mike’s diary) are dedicated to fleshing out the history of Derry. Starting with the disappearance of the first Irish settlers, up to the Iron Works explosion, the fire at the Black Spot and the Bradley Gang shooting, King is sure to give a deep historical background to the town of Derry. While nothing short of a television series could fully investigate the entire history, a graphic novel would be able to give a deeper insight to these happenings. With full illustrations, the history of Derry can come alive in all its grime and gruel.

Something a graphic novel can do is also expand on that history. While many of the dark happenings in Derry’s past are fully documented, many of the years of Pennywise’s wrath are left a mystery. In one of Mike’s journal entries, he lists the years of Pennywise’s appearances. From the 1700’s up until modern day, many of the appearances are left unexplored. Mike talks about entire families disappearing,  and speaks of one span of time (1740-1743) that “must have been a bad one”. These incidents are never explored again, but a graphic novel can more fully explore those eras, give a face to those years of destruction. Was there a time when Pennywise became a suspect in the child murders? Did groups of parents band together to try and hunt their child’s murderer at any p? Was there ever a siege scenario, where a family fought to the death against one of Pennywise’s guises? What horrifying caricature did Pennywise take on to scare the children of the 1700’s? The possibilities are endless.

Growing and adapting right along with the history of Derry is its polluted, twisted son, Pennywise the Clown. Pennywise was most famously portrayed by Tim Curry in the TV adaptation of IT, a role that sent many kids to bed with nightmares in the early 90’s. While Curry’s performance has become synonymous with the character, other interpretations of the character can and should be explored. In the upcoming feature film, Bill Skarsgard will be playing the evil clown, but that doesn’t mean it should be the last adaptation. What is nice about the written word is that its visuals are always up to interpretation. Even though the TV mini-series went one way with Pennywise and the feature film another, that doesn’t mean the full spectrum of Pennywise has been explored.

Pennywise is a trickster and a shapeshifter. One moment he puts on the face of an endearing clown to lure children to their doom, and in the next moment, he appears as their greatest fear, hunting them as the terror under their beds. This constant state of change, both in looks and methodology, would work perfectly in a graphic novel. The ability to go from a goofy, happy clown to a living nightmare can move from panel to panel, keeping readers on edge as to the next variation of Pennywise they will encounter. A completely unpredictable antagonist is a terrifying prospect to any reader.

READ: Delve into the dark recesses of your mind with this article on David Firth!

That is the true strength that IT can bring to a graphic novelization. It is a novel steeped in nightmarish imagery. The numerous incarnations of Pennywise, as a rotting leper or as the gill-man from CREATURE FROM THE BLACK LAGOON, can come to nightmarish life through illustration. Many of these horrifying images can come through as cheap or cartoonish on film (look no further than the ill-advised “spider” at the end of the TV mini-series), but can become absolutely skin-crawling when illustrated.

A great example would be the teen wolf. In the TV mini-series, the teen wolf appears to a young Richie (played by a young Seth Green!) in the boiler room of his school. The werewolf doesn’t bring a sense of fear to the audience; it’s cheap and looks like a guy in a rubber mask. In a graphic novel, though, that monster can be brought to a much scarier extreme, the actual description in King’s novel being easier to portray in illustration (and, for those who have only seen the mini-series and not read the book, the scene takes place at the house on 29 Neibolt Street, a major part of King’s novel that barely appeared in the mini-series.)

While IT is King’s longest novel, it is also one of his most controversial. It is a book filled with child murder, pre-pubescent sex and the threat of incestual rape— material that, in all probability, will not appear in the major motion picture. A graphic novel would not have such limitations; the gruel and the filth and the horror of King’s work can be fully realized in the comic form. While some material may be edited out, at least the gratuity of it (specifically the final scene in the sewer), a graphic novel would be able to more tastefully skirt around the scene, while still keeping its essence, and its importance to the theme intact. With the harsher material intact, a stronger, fuller IT adaption can be made.

READ: The connective tissue between STRANGER THINGS and Stephen King!

This wouldn’t be the first foray into comics for King ,with his novels THE STAND and THE DARK TOWER series (both are also lined up for feature films) being immortalized in paneled art. King himself is a comic book fan, writing and developing the film CREEPSHOW with George Romero, based on the EC comic books from the 1950s. His son (Joe Hill, HORNS, HEART-SHAPED BOX) has also worked in the industry, having written the acclaimed Locke & Key, as well as turning his unused screenplay for the new TALES FROM THE DARKSIDE show into a comic. With so many other works already seeing a graphic novelization, why King’s IT hasn’t seen the same treatment is an issue that should be resolved.

IT is a horrifying novel. It’s a story of fear and death in a small New England town. It is also presents itself as a gothic fairytale, a twisted moral fable, not unlike the fairytales from the Grimm brothers. Just like any great fairytale, IT deserves to be illustrated in all its glory and terror.