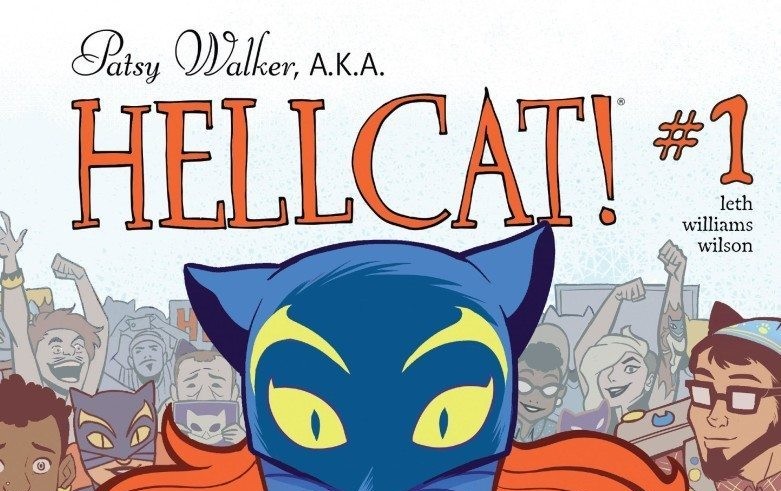 When you have Kate Leth of the award-winning ADVENTURE TIME: SEEING RED team up with LEGEND OF KORRA comic artist Brittney Williams, as well as Megan Wilson on colors, you get a kick-ass, light-hearted comic book featuring Marvel character, Patsy Walker in PATSY WALKER A.K.A. HELLCAT #1!

Patsy Walker has a long history from the many timelines in her career in the Marvel universe. With that said, I took the time to really research her roots and origins of her powers. If you don’t know much about Hellcat, here’s a brief summary to her in past in comic books:

Patsy Walker was a lab assistant for Hank McCoy (Beast from X-Men) briefly and met her future husband, the Son of Satan, through venturing with the Avengers. During her marriage, Patsy was driven clinically insane and committed suicide. So this already sounds out there, right? Her time spent in hell, however, teaches her hand-to-hand combat and how to use her psychic powers. Then poof! Her spirit is at some point brought back to Earth, and that’s Hellcat’s origin story! The introduction of this first issue refers to her return from hell, so I think Leth picks the story up from a time after her spirit returns to Earth and readapts Hellcat’s origins for this series.

READ: If you love PATSY WALKER, you might find yourself loving TRUE BELIEVERS: SQUIRREL GIRL!

We catch up with Patsy Walker A.K.A. Hellcat stalking the streets of Brooklyn, conducting some small-time crime fighting. With the help of her psychic senses, Hellcat locks in on a shady looking passerby using some sort of mystical energy to rob a bank truck. After her attack on the telekinetic criminal leaves Hellcat frozen in mid-air, we learn the thief is just trying to make a fast buck to pay for everyday expenses. Determined to help her new friend Ian Soo A.K.A. Telekinian turn his life around, Walker takes him to meet with her boss/lawyer, Jennifer Walters A.K.A. She-Hulk. She-Hulk has hired Walker to be an investigator for her and seems to also play a supportive role in her life. 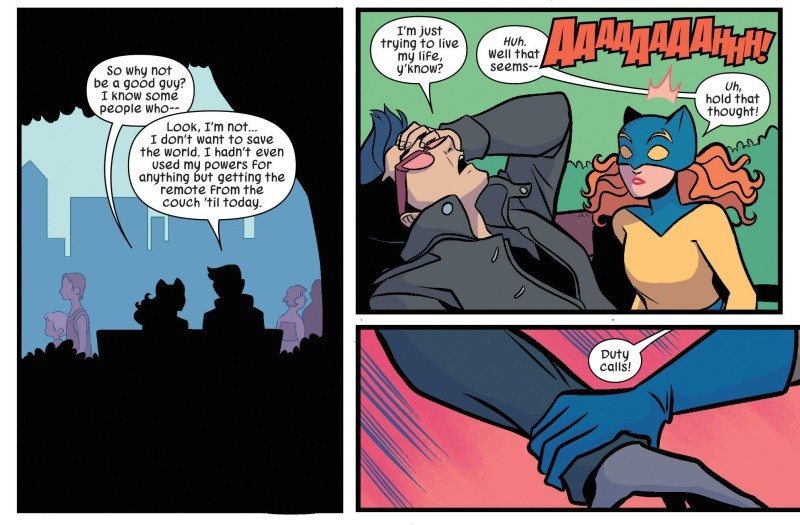 So the idea is to convince She-Hulk that his confession to committing  and reversing a crime will be rewarded, but, sadly, that falls through. And after hearing Telekinian’s sob story, our charismatic superhero finds herself in a sudden bind to make ends meet herself. She-Hulk reveals to Walker that she can’t afford to pay her, considering there is no work for her as an investigator at that time. Not much later, she also learns that she is in need of a place to live too! Luckily for her, Telekinian won’t leave her to be a stray cat and suggests they become roommates. It’s fitting that Walker just escaped from actual hell to a new kind of hell, trying desperately now to survive some of the many woes of living in the city during your mid-twenties alongside Telekinian.

And still within that same day, Walker runs into an old friend of her’s from prior comic books in her past, Tubs.  Tubs runs a bookshop and shows Walker the comic books based on her childhood years are back in print, thanks to an old friend, Hedy. Hedy owns rights to the books after Walker’s mother sold them to her, and has been making money off the series since. She’s cut deals with many featured in the story, Tubs included. I’m sure there’s no worse feeling than losing a job and place in one day, then finding out people are making money off your life. So our innovative hero comes up with a strategy, proposing a job agency for heroes and well…others who need jobs too. So Walker is definitely onto something in this issue, even though her friends don’t really understand it yet!

It’s rad to see Patsy Walker’s long-lived career get reinvented multiple times in the Marvel universe, since her debut in 1944. Leth has been able to modernize Patsy Walker with a story featuring relatable problems for any twenty-something: dodging daily crises and balancing out whatever responsibilities come with the pursuit of kinda-still-growing up. Even from this first issue, we see a lot of the story unfold, from Patsy introducing us to those closest to her since escaping hell to Patsy really getting a feel for how much her life has changed since then.

READ: Get a sneak peek of the variant covers from Marvel for Women’s History Month in 2016!

The narrative pairs brilliantly with Williams’ fun character designs, almost as an ode to Patsy’s origins in her self-titled comic in the 1940’s. The sleek inks in the comic book also compliment the vibrant color palette by Wilson in the story. The combination of the two liven up Walker’s silly antics throughout this first issue and move across the pages fluidly for readers.

Although this reads as a playful comic book with its art and plot, it’s one to take seriously because of its themes. As I mentioned, Hellcat and Telekinian face problems a lot of readers in their mid-twenties, including myself, can find relatable: job hunting, apartment searching, and avoiding all mentions of the past. Somehow, though, Leth, Williams, and Wilson have successfully done it in a way where we can laugh about it as Patsy and as ourselves.

A lot of readers might also associate the name with her storyline in the Netflix show JESSICA JONES, but the two don’t share much in common besides the name Patsy. And even so, Patsy shines in this series, serving as a great introduction for new readers to her bizarre past and while also explaining who she really is. This kitty definitely has nine lives in the Marvel universe, and PATSY WALKER A.K.A. HELLCAT will definitely be one of them going into the new year.