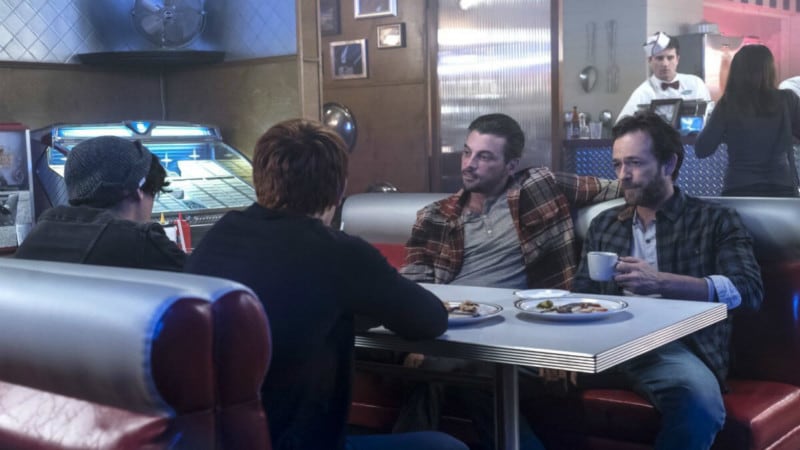 In the wise words of the great American poet William “The Fresh Prince” Smith, off the collection He’s the DJ, I’m the Rapper, parents just don’t understand. This sentiment rings true in the ears of any teenager in history because it’s almost right. When you’re young, you believe that you know everything and are unappreciated. It isn’t until later in life that the hormones balance out, you have a child of your own, and you speechlessly stare at him as he yells that he “hates you” and “this is why mom left you.” At that moment, you wonder if you were ever this unruly and calculate the difference between what a box of condoms cost 16 years ago and the portion of your check that is garnished monthly for child support. Parents may never understand, but on RIVERDALE the parents don’t have to because they are out of control and it is excellent TV. 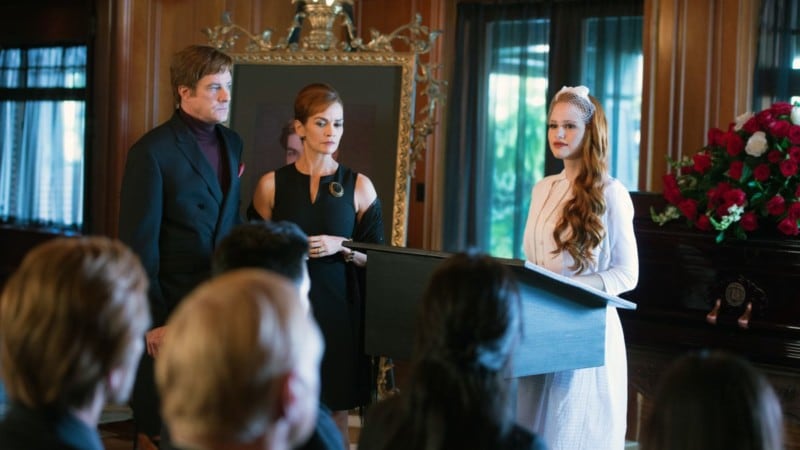 RIVERDALE has managed to hook its viewers with young and sexy characters, but much like Red Lobster where you come-for-the-shellfish-stay-for-the-cheddar-biscuits, the real juicy drama comes from the parents of the show. Throw a rock in any direction and you’ll hit an unfit parent: Jughead’s biker father, Betty’s overprotective and short-tempered mother, Cheryl’s Stepford family, Josie’s unsatisfied musical father, or Veronica’s incarcerated daddy.

Even the good guys aren’t entirely clean. Veronica’s mother, Hermione, is still making backdoor deals for her imprisoned husband yet hooking up with Fred Andrews and Sheriff Keller — who is constantly illegally questioning people and was ready to pin Jason’s murder on Jughead because he was a victim of bullying. But why on a show that has so much drama amongst the main cast go and complicate the lives of the adults? Why not just have them be in the background? There are a few reasons.

READ: Want to know more about RIVERDALE? Check out our analysis of RIVERDALE’S ARCHIE ANDREWS!

First of all, RIVERDALE is a murder mystery, and to keep the audience guessing every week you have to make everyone a suspect. Initially, you believe Jason Blossom’s killer is obviously Alice Cooper because she hated him. Then you think it is the scandalous teacher, Ms. Grundy, because she’s faking her identity, hooking up with a student, and owns a gun. After that, you believe Jason’s murderer to be Hal Cooper after it appears he stole documents from Sheriff Keller’s office. The latest suspect is FP Jones, Jughead’s father, who has Jason’s letterman jacket in his closet for some reason. Much like a magic trick, the deeper you go into these characters, the easier it becomes to misdirect the audience and surprise them. 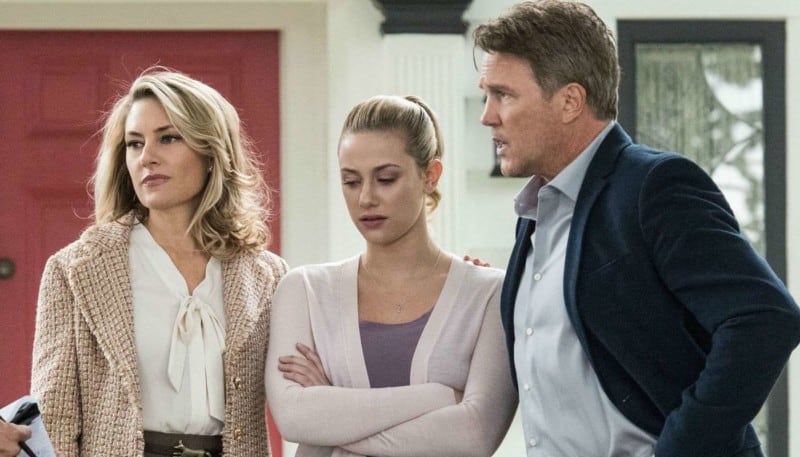 The second reason RIVERDALE focuses on adult characters so heavily is that their side stories help uncover things that tell us more about the teens. For instance, FP Jones’ substance abuse led Jughead’s mother and sister to leave home. Also, Polly and Jason’s story is so much better now that we know the Coopers and Blossoms are on some Romeo & Juliet shit have a storied history that involves murder and money. These plotlines are all interesting, but I believe the main reason the parents are so unruly is that they appeal to RIVERDALE’s target demographic.

Nothing correlates more with the teenage delusion that parents are out to ruin your life than the teenage drama. These adult characters deepen young viewer’s connect to Archie and the Gang. If you don’t think that’s true, look no further than a few key moments. When Betty confronts her mother and father about the murder of Jason Blossom, they treat her like she’s crazy for suspecting them. When she claims she doesn’t know if she can believe them, her mother responds, “You don’t have to believe us: we’re your parents!” Josie’s father meets Archie at a dinner party and insults him in front of the other adults by disdainfully questioning Archie’s knowledge of Josephine Baker; no one bats an eye. Finally, Jughead comforts a frazzled Betty by reminding her, “They’re parents, they’re all crazy,” and “We’re not our parents, Betty; we’re not our families.” It’s an old trick, and while RIVERDALE is the most recent show to use, it certainly isn’t the first — or even the best. It doesn’t matter how hard you ride for GOSSIP GIRL, ONE TREE HILL, or RIVERDALE no show did this better than Fox’s THE O.C. 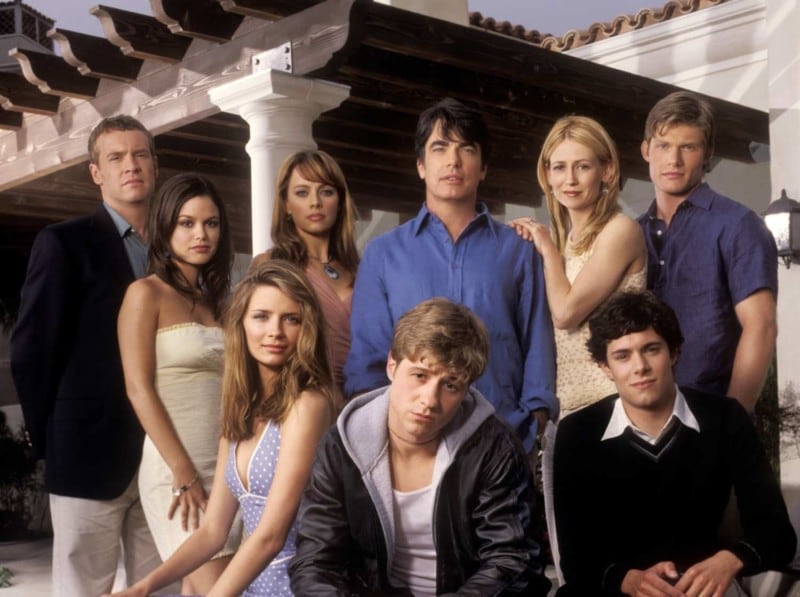 If you don’t recall the 2003 show, that’s because it was criminally cut short after four seasons. Ryan Atwood, played by GOTHAM’s Benjamin McKenzie, was a troubled youth that found himself under the foster care of his attorney, Sandy Cohen, and his wife, Kirsten. Along with his foster brother, Seth Cohen, aka the God of Nerds in the aughts, Ryan navigates the drama of living in high society. Similarly to RIVERDALE, the teens of THE O.C. had plenty of issues to deal with, but the adults were on another level. They abused alcohol, had affairs with their daughter’s ex-boyfriends, committed fraud, got into fights, plotted to murder one another, the list goes on! In all this, like all kids across America, these teens needed stable adults. People the kids could run to when things got too heavy. These characters were Sandy and Kirsten Cohen. They were the voices of reason. The people you could count on when everyone was ignoring you. Who are the Sandy and Kirsten of RIVERDALE? No one has stood up to the plate, but they might be Fred Andrews and Hermione Lodge.

Fred Andrews appears to be one of the only solid adults on his show. Sure, he’s involved with Hermione, but his wife lives in Chicago, and they’re separated. Sure, he lied about his work records to Sheriff Keller, but that was only to provide Jughead with an alibi. Fred Andrews may not be an untainted man, but he’s a good person. Hermione might be a little shady, but she doesn’t treat her daughter like an idiot, she owns her decisions, and she offers help to those in need (I’m looking at you, crazy Polly). If I’m a betting man, as the season goes on we’ll see them ease into these roles a bit. They might even help kids outside of Archie and his normal crew. 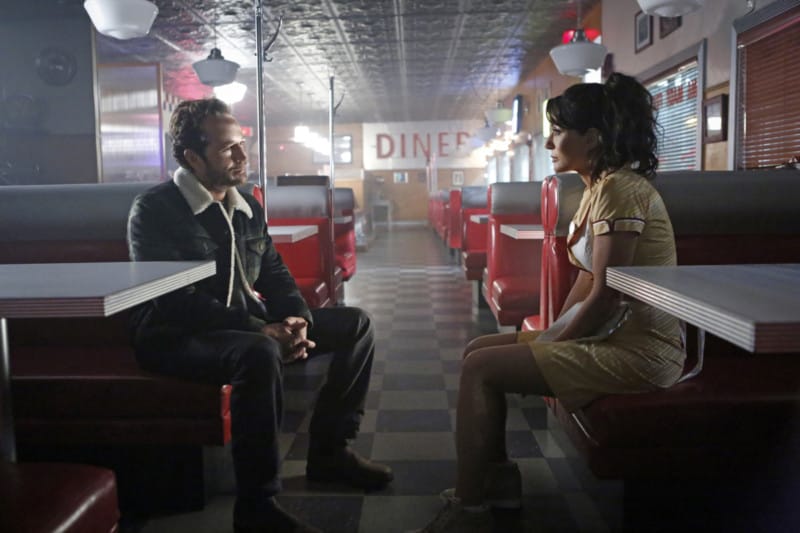 Every single adult on RIVERDALE speaks to your inner-teen — who is currently screaming into a pillow while everyone else gets to go to Stacey’s party — because they don’t act like adults at all. They’re people who have aged but never matured. Maybe Fred and Hermione can stop rekindling their high school flame to be the go-to parents. Maybe they won’t, and someone else will come along. For now, we’ll look for the parents of RIVERDALE to do what they do best: bring the drama. This week, the history between the Blossoms and Coopers is set to explode, Jughead’s dad will be exposed as a member of the Southside Serpents, we’ll find out what went down with Hermione and Hiram’s phone call, and maybe — just maybe — the kids will do something cool too.