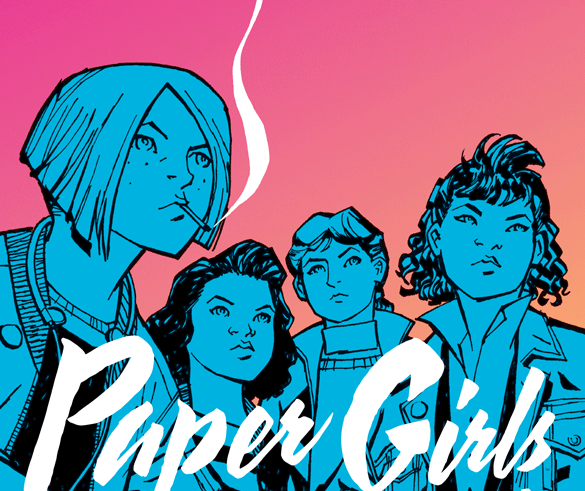 Over the last few years, we have seen something of a slight resurgence of that 1980s sci-fi/fantasy flavor that was perfected in films like E.T. and STARMAN. PAPER GIRLS is a beautiful tribute to those films and the child adventure films THE GOONIES and THE MONSTER SQUAD. Brian K. Vaughn continues his streak as one of the best comic writers working today with these first 5 issues. What Vaughn is best at is creating memorable and realistic characters in the midst of a “WTF is going on” sci-fi/fantasy narrative, with PAPER GIRLS being a definite continuation of that trend. 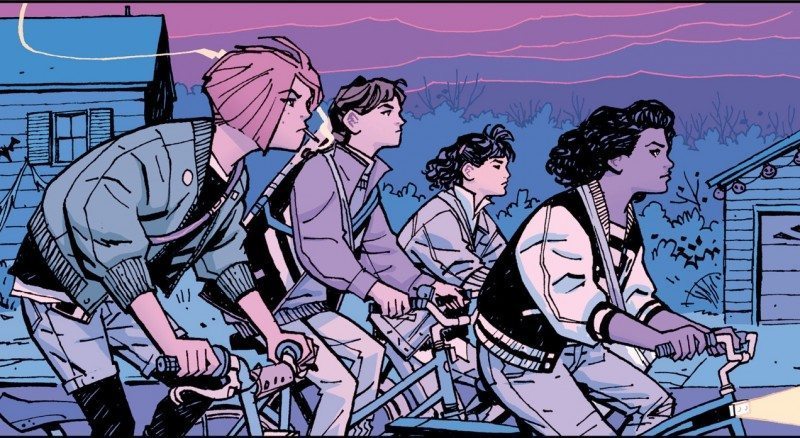 PAPER GIRLS follows Erin, Mackenzie, Tiffany and KJ, a group of adolescent newspaper delivery girls who embark on a trippy science fiction adventure. The story is set in 1988, but knowing Brian K. Vaughn’s work, the comic is liable to span several years. PAPER GIRLS begins with Erin’s first day of delivering newspapers, where she meets the three other delivery girls before they all end up in the middle of an apocalypse-style event that none of them ever saw coming.

READ: Fan of Image Comics? See our thoughts on the publisher that’s changing the game

The four central characters are so well written and realistic that you wonder if Vaughn himself was a 13-year-old girl in the late Eighties. Their interactions with each other and the choices they make during the crazy events of the comic seem genuine and help the reader buy into the absurdity. Vaughn’s history of writing comics and his background in television both really pay off in PAPER GIRLS by using the episodic nature of the comic to add suspense and mystery to the narrative. Each issue creates another fun, yet unclear layer, in a larger complex narrative. 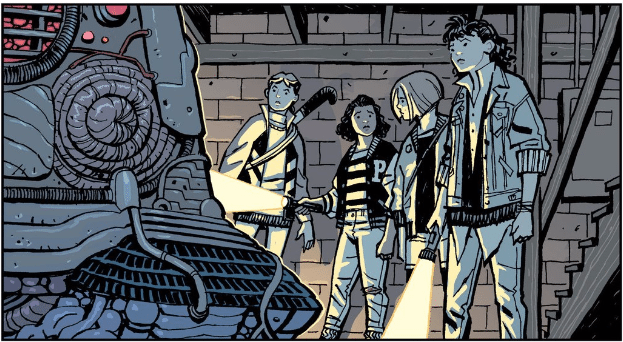 Brian K. Vaughn is often the star of his own comics with the plot and characterization overshadowing the artwork. PAPER GIRLS might be an exception to this. Cliff Chiang’s pencils really pop off the page, lending themselves both to the young naïve faces of the protagonists while also displaying beautiful and terrifying science fiction imagery. The combination of Chiang’s art and Matt Wilson’s neon-tinged colors gives the comic a nostalgic feel that I hope stays consistent as the narrative develops and spans across different times.

READ: For the Brian K. Vaughn fans who are reading SAGA, check out our review of issue #35!

PAPER GIRLS is not just a great comic. It’s a comic you should be reading. If you grew up in the Eighties or you are just a fan of the classic kids in trouble stories seen in films, it’s without a doubt worth your time and dollar. You can collect the first five issues of PAPER GIRLS in the trade paperback edition in stores now! If you have read it already, let us know your thoughts on it in the comments below.