Given that he won the election, President-elect Donald Trump’s campaign promise to “Make America Great Again,” or #MAGA on his favorite social media site, seems to have been effective despite its vagueness. Essentially, the slogan is a direct appeal to nostalgia. A portion of the electorate views any semblance of a socially progressive agenda as “un-American,” simply because it implies a shift in values from previous decades. The nation’s positive collective memory of the past has become a condemnation of its present condition. Since nostalgic sentiments have warped our perception of the past, we have a tendency to consider anything that indicates change automatically bad. I’m going to refer to this phenomenon as “toxic nostalgia.”

Nostalgia, in general, is a prominent theme in Brian K. Vaughan, Cliff Chiang, and Matt Wilson’s comic, PAPER GIRLS. The comic takes place in 1988 and follows Erin, Mac, Tiffany, and KJ, four paper girls in the suburbs of Cleveland. The night after Halloween, their neighborhood becomes a battleground for two feuding factions of time travelers. The four girls are propelled into 2016, where they encounter an older version of Erin who agrees to help them straighten things out.

Just like Trump’s call to #MAGA, the underlying nostalgia in PAPER GIRLS is in some ways toxic, too. When the girls arrive in 2016, Erin is surprised by the way things have changed. Not only has the mall closed, but her older self is taking a mystery medication called Xanax and working a dead-end job. She tells her older self that something must have gone horribly wrong in this timeline.

Older Erin is left to explain to her younger self that no, she’s not living in some post-apocalyptic reality. Things just turned out differently than Erin expected, and life isn’t as bad in 2016 as it might seem from the perspective of someone from 1988. Younger Erin is errantly judging all of the changes between 1988 and 2016 from her limited perception. From her point of view, if KB Toys is out of business and her personal life isn’t what she anticipated, everything must have gone wrong. 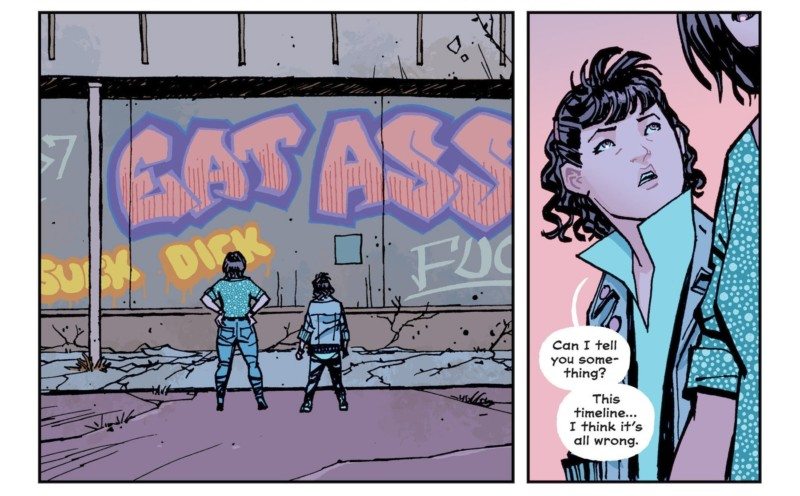 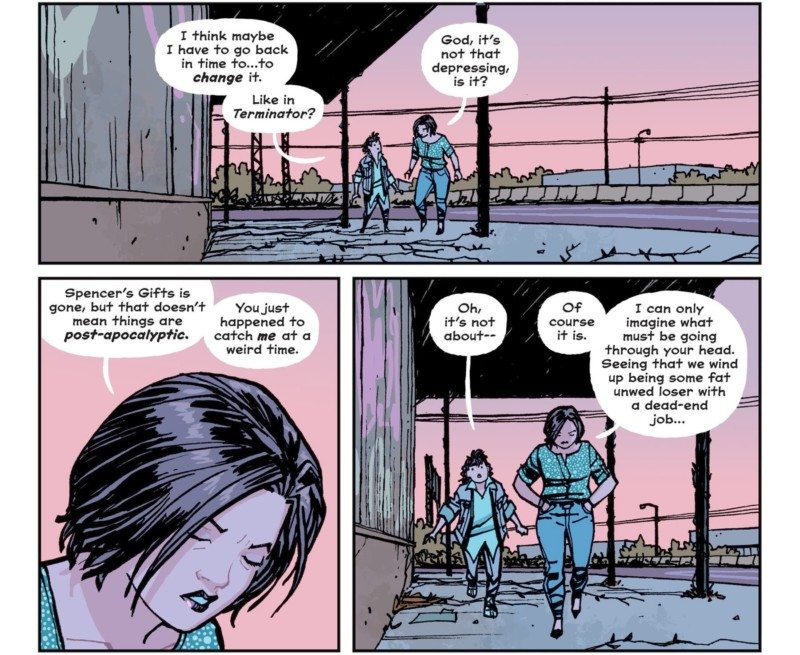 Younger Erin’s limited perception of 2016 makes it impossible for her to objectively evaluate the state of the things. Like Erin, our perception of the past, even of well-documented political events, is confined by our subjective perception. PAPER GIRLS also provides an example of our tendency to internalize political events. When younger Erin is accidentally shot, she hallucinates that she is ice-skating with President Reagan who reassures her that not everyone who gets shot dies. As they skate, Russian missiles fly overhead along with a space shuttle shooting a laser, likely a reference to the Strategic Defense Initiative, known colloquially as “Star Wars.” Although Erin never personally witnessed any of these events, these political images still form a part of her memory, a memory that isn’t entirely accurate. 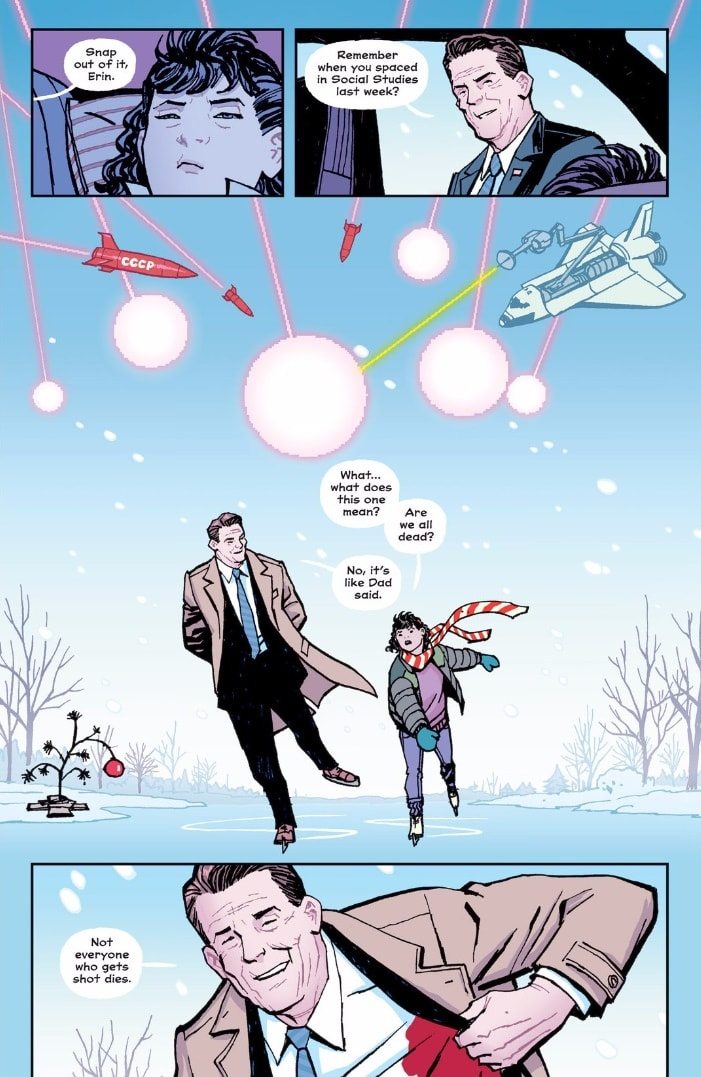 In PAPER GIRLS, the purely political and purely cultural references to the 1980’s are not treated differently from one another, since the two come together to form the period’s pop culture. Similarly, the nation’s memory of Reagan’s presidency is inseparable from our memory of the 1980’s as a whole. This merge between culture and politics distorts our perception of the past and can create a false connection between cultural and political developments, another source of toxic nostalgia.

Many Americans nostalgically look back at the 1980’s as a time of economic prosperity, and this decade may very well be what Trump has mind his promise to #MAGA. However, in this period the United States was not as culturally diverse or inclusive as it is today. Despite its idyllic and nostalgic depictions of late 80’s culture, there is an acknowledgement in PAPER GIRLS that the culture of the 80’s wasn’t the greatest for everyone.

READ: Do you like your comics a little political? If so, read about Trump and misogyny in TOKYO GHOST!

The first words out of Mac’s mouth in PAPER GIRLS #1 is “Cool costume, faggot.” The word choice here is intentionally jarring and is part of Mac’s characterization as the toughest paper girl. In PAPER GIRLS #4, Heck, one of the male time travelers, explains to the girls that the other faction, the “oldtimers,” killed his boyfriend. Mac reacts with disgust rather than sympathy for Heck’s loss, but Heck doesn’t take it too personally. He remarks that the girls are from “an effed-up time.” 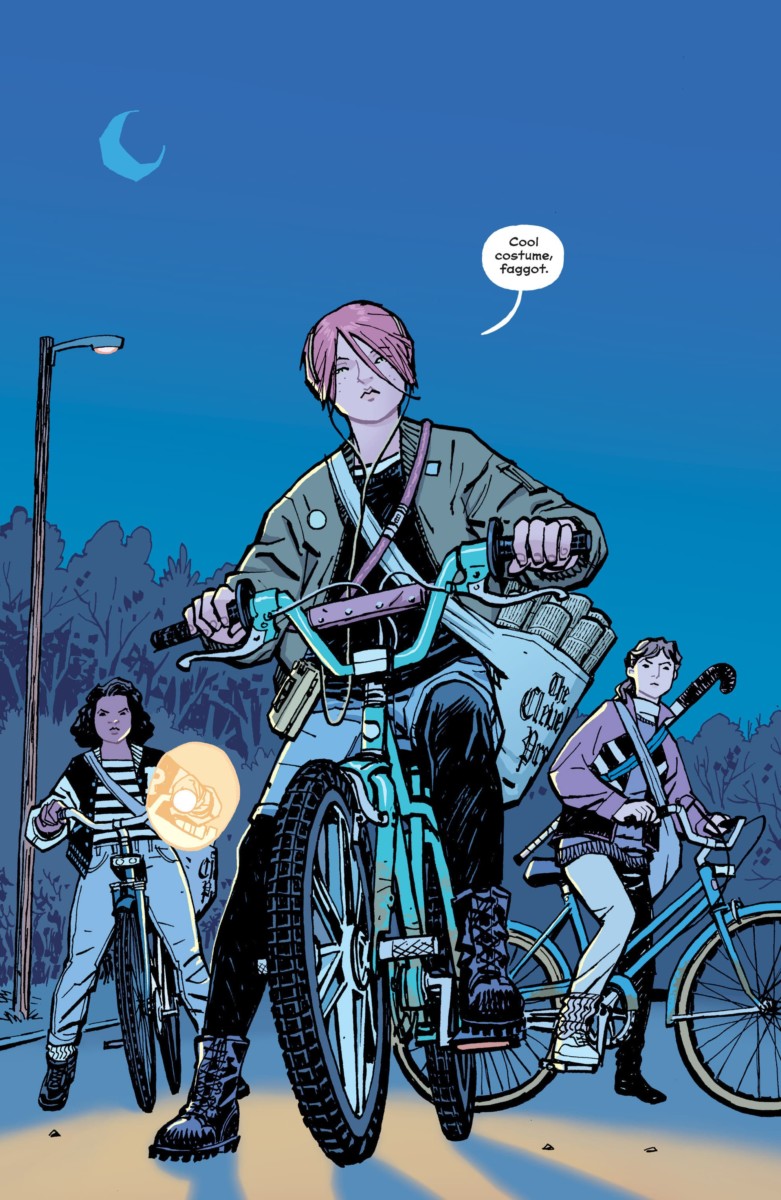 It’s not lost on Heck, whose boyfriend was just murdered as part of a feud taking place in his time, that there is something particularly “effed-up” about a society that is uncomfortable with homosexuality. Cleveland in 1988 is undoubtedly more peaceful than the time period that he and the other time travelers are from. However, his understanding of change is nuanced. He understands that even if the 1980’s is less violent, this doesn’t make everything about 1988 automatically better than the time he’s from. Furthermore, it certainly does not make a culture of homophobia acceptable.

READ: Need a distraction from politics? We got you covered! Here are four horror comics that are almost as scary as Trump’s presidency!

Heck’s understanding of the past allows him to evaluate it objectively, rather than just wistfully see the 1980’s as a simpler, less violent time. Trump’s call to “Make America Great Again” is extremely troubling because it lacks this nuance. The vagueness of this campaign promise has blurred the line between those who are nostalgic for a time of greater economic opportunity and those who are nostalgic for a whiter, more patriarchal America. The scapegoating of minority groups and the condemnation of political correctness are both examples of toxic nostalgia at work.

When evaluating our nation’s history to plan future legislation, it’s important that we take all aspects of change into account. There’s nothing wrong with arguing that the United States was better off economically or politically in past decades. However, it is important to acknowledge that the United States is currently at its most diverse and most inclusive culturally. Like the time traveler in PAPER GIRLS, we need to recognize that the past was not perfect. It’s impossible to #MAGA for groups of people whom the nation was historically never really that great to. In order to make America great for everyone, we need a leader with a nuanced understanding of the past who recognizes that the American experience is not monolithic. Only time will tell if our President-elect can become that leader.