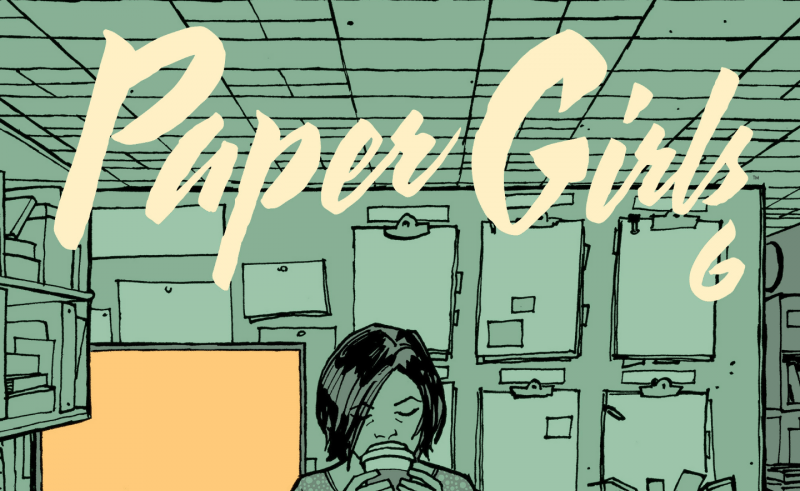 Brian K. Vaughan is the current darling of the comic book world. His work speaks for itself, with SAGA continuing to rack up awards, Y: THE LAST MAN becoming an iconic series, and PAPER GIRLS  flying off the shelves. So far, the latter series hasn’t disappointed, definitely due in part to Vaughan’s partnership with Cliff Chiang. The characters have been articulated with distinctive personalities, juxtaposed with a nostalgic ’80s backdrop, Sci-fi elements, and compelling cliffhangers. It should also be noted that PAPER GIRLS centers around four dynamic young ladies, who prove females can carry a story that is for all audiences.

READ: Catch up with PAPER GIRLS with our review of Volume One!

PAPER GIRLS #6 picks up immediately where the last issue left off. Adult Erin Tieng is driving in her Smart Car talking to her sister about their mother when she finds the girls in the middle of the street. The two Erins quiz each other on who they are, and the defining test happens when each shows the shared gunshot wound scar—though Adult Erin doesn’t really know it’s relevance. After some discussion of time travel, Adult Erin agrees to take them to her place and reluctantly helps the girls with the missing KJ dilemma. 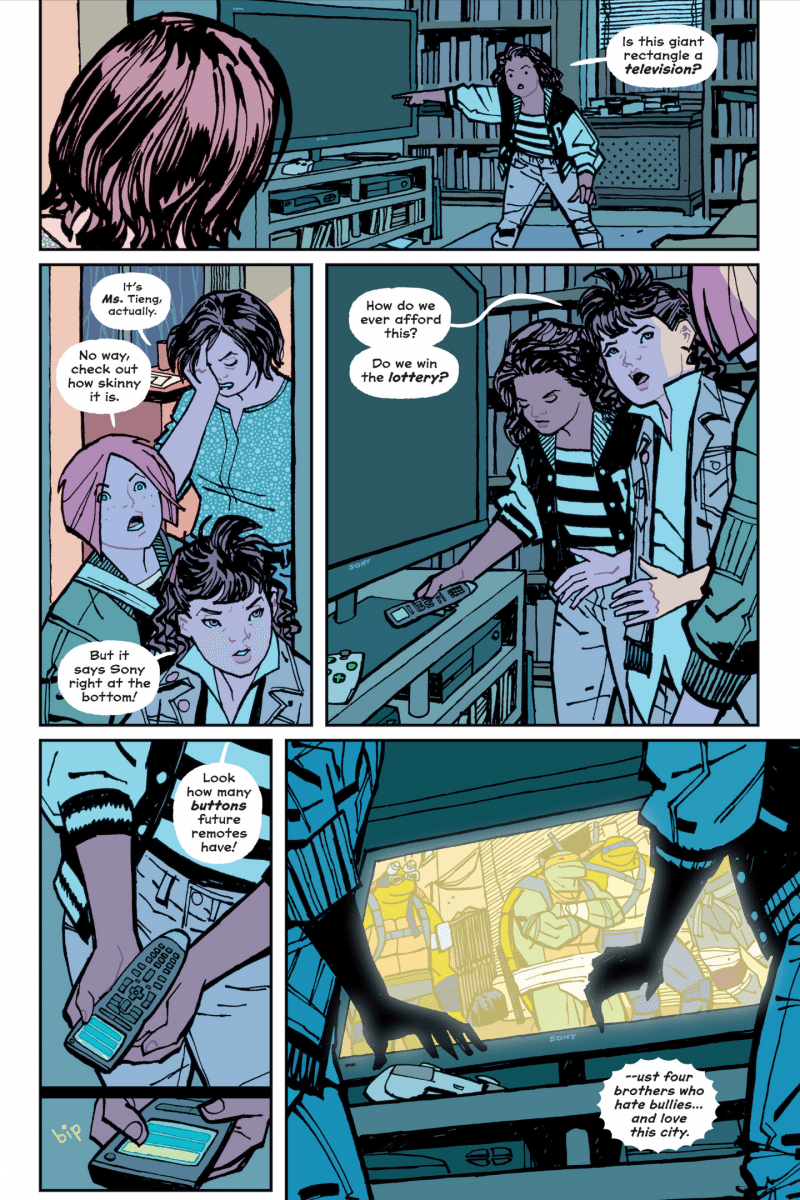 The strengths of this issue come from Vaughan’s time travel humor and characterization, coupled with Chiang’s consistently wonderful artwork. The girls marvel at 2016 technology, and their interactions with these enhanced everyday appliances are magnificent. The issue’s fantastic characterization starts with the two Erins. Teenage Erin seems to be taking the lead in finding KJ. Her burgeoning friendships with the paper girls have clearly impacted her. Their bond amidst the chaos has turned a new leaf for Erin. Her questioning her future self’s life choices is quite amusing, as well. Adult Erin’s personality is explored the most. We see her relationship with her family and her outlook on her career, thanks to teenage Erin’s observations, and so far her attitude, disposition, and frequent swearing indicate a little bitterness as to how her life unfolded. The smoking, red-headed fireball, MacKenzie, takes a backseat in terms of leadership, but her brash mouth still fires in from time to time.

READ: Check out our review of SAGA‘s latest issue!

Chiang balances Vaughan’s brilliance with his own. The characters’ expressions, placed in a world with detailed clothing design and excellent foreground/background bring you into the wacky PAPER GIRLS universe. Issue after issue, he produces consistently great stuff, and that should be rewarded. My only small gripe comes with the odd way he chooses to draw headlight beams. If they were drawn more conically, it might have been less distracting. 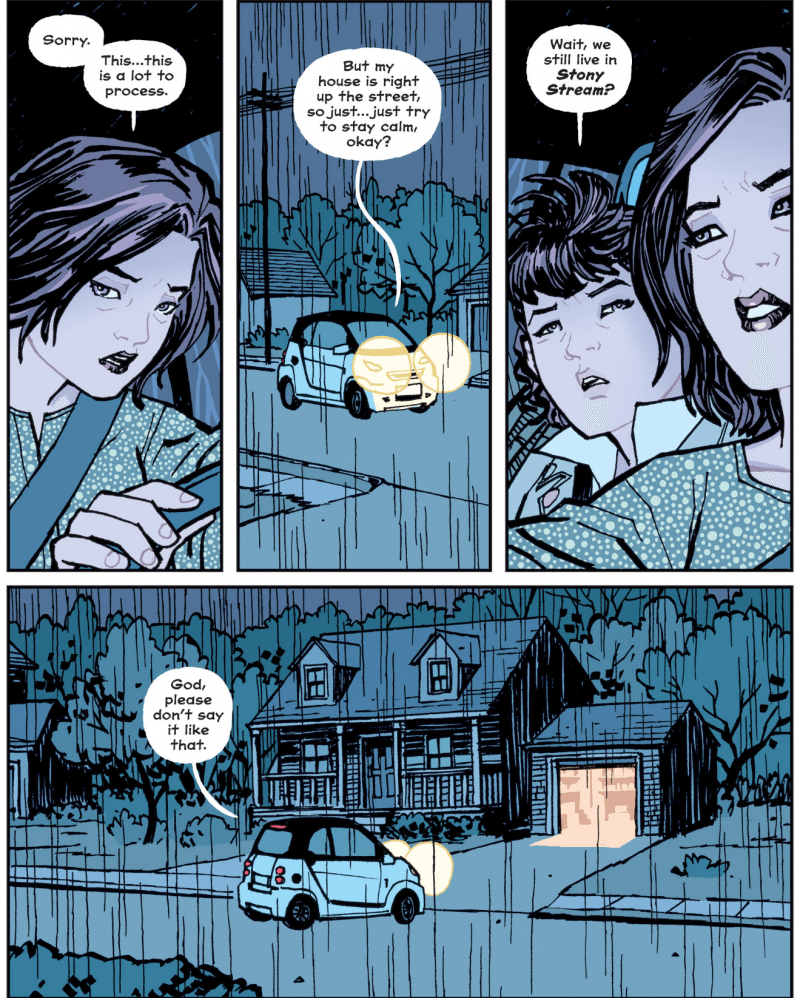 An interesting theme of PAPER GIRLS is adults versus children. Throughout the series, the young ladies have had to battle through trigger-happy elders and “older” future people who are out to get them. Adult Erin, probably their first adult ally, isn’t easy to deal with either. The mindsets between the adults and the children in this series are so contrasting. The kids are vibrant, anxious go-getters while the adults are demoralized, tired, and unsure. The proactive kids have to convince Adult Erin to help with KJ. Vaughan might be commenting on the loss of innocence during puberty, or perhaps he’s making a statement on how adults lose positivity from living selfish lifestyles instead of lives that benefit human communities as a whole. There is much to figure out, but so far the absence of adults has catapulted our heroes to grow and discover things about themselves as they, too, near adulthood. It’s an interesting pattern and theme to keep track of going forward.

Of course, the book is not without its flaws. PAPER GIRLS #6 may be the weakest issue yet in terms of plot. It’s a character introduction issue with a couple of key twists that I can confidently assume are of major importance going forward. However, the time-travel conflict is getting tricky, especially now that the girls have hopped decades. It’s a bit convoluted and a worn-out plot device. The mind spins thinking of all the possible time-travel implications, and it can be dizzying.

The focus should be on the girls. The twists keep the book grounded and Vaughan certainly gets the benefit of the doubt. I just hope the story doesn’t go too off the rails because the actual paper girls have been the highlight of these books and should be the focus, not time travel nonsense.