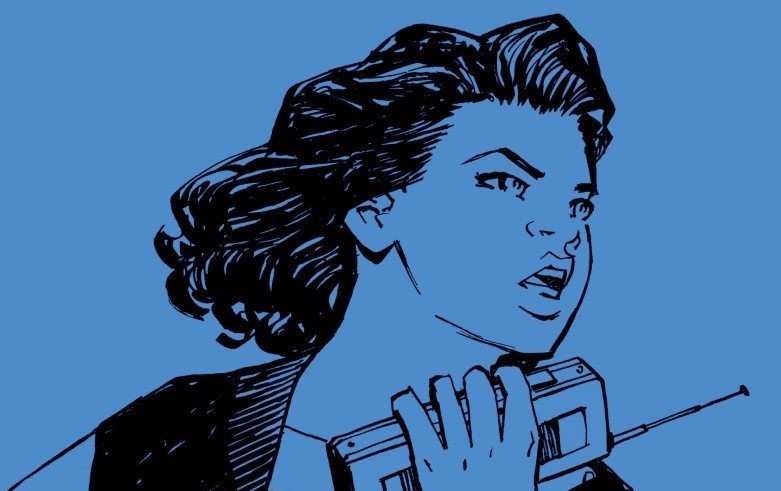 The first two issues of PAPER GIRLS introduced a lot of insane concepts and mysteries, and this issue we finally see some answers… well, the beginnings of them!

Like I said, there are a lot of mysteries to unravel. So far, the entire town has been ravaged by mysterious skies that ejected dozens of pterodactyl-like creatures (perhaps a real ancient animal? I’m not sure), unexplained disappearances of residents (including the titular girls’ parents), and at least two groups of mysterious figures with currently unknown goals. While it’s obvious that Vaughan is playing these mysteries pretty close to the chest, this issue slips us readers enough information for some brainstorming. 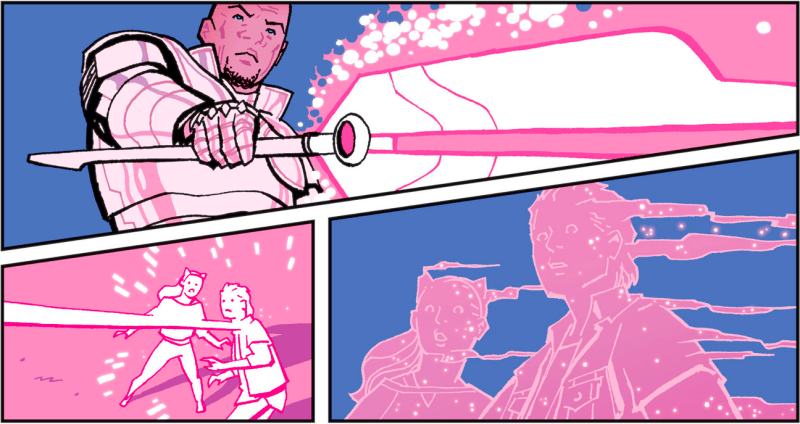 The issue opens with a look at another group of youths during this… I’m not sure if it’s an invasion, or a rapture, or something else entirely. I do know that most of residents of Stony Stream have disappeared, or maybe been disintegrated. They’re gone, in any case, and some enigmatic folks in chrome armor have been rounding up the stragglers. They’re riding the Pterodactyl things too, I should add.

READ: Our thoughts on Mary Jane’s introduction to IRON MAN in this week’s issue!

The Paper Girls are up against a lot here. Dark skies, enchromed soldiers (or something?) and prehistoric flying beasts would be menacing to anyone, but admirably the girls keep their cool and focus on survival. This of course hits a kink as Erin, our POV character and newest paper girl, is revealed to have been shot by the smoking gun left over from last month’s cliffhanger.

As the girls rush to the hospital, they meet one of the Chrome Visitors, and come to learn more about the Ragged Visitors we saw in the previous issues. 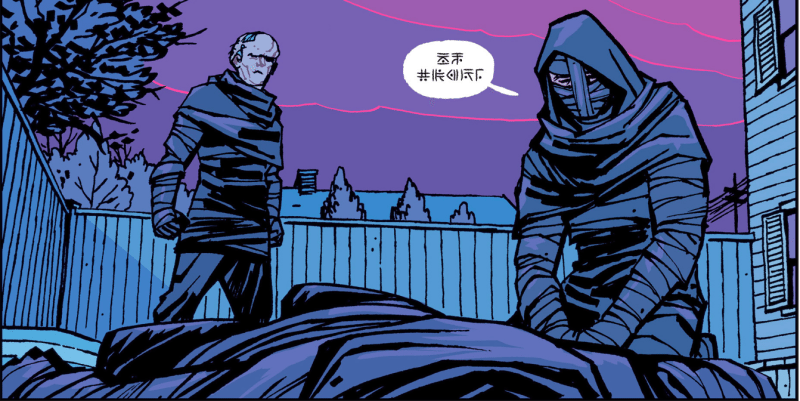 I had so much fun reading this. Granted, most of my time was spent ogling the art and deciphering the language used by the Ragged Visitors. It’s a basic substitution cipher, but I’m terrible at picking out symbols, so it took me forever. Luckily for those not inclined to pick apart their speech bubbles, the art is clear enough to convey the actions of the Ragged Visitors. I love it when comics use things like this—it reminds me of Final Fantasy X and the Al Bhed language, if anyone is familiar to that. I wonder how it would sound aloud. I may make another post this week with my cipher (minus a few letters that they haven’t used yet) if there’s any interest.

I think I’m officially drawn into the mystery. The series had enough gravitas to start with its creative talent alone, but they’ve developed it into something really clever that I want to see through to the end. My current theory of the events is that the Chrome Visitors are some kind of time traveling future humans working to preserve the human race somehow (an institute maybe?), while the Ragged Visitors are a rebel force intent on stopping their counterparts. They’re both time travelers, in any case. I suppose we’ll see how that turns out, but I think I’m on the right track.

CHECK OUT: Our review of SANDMAN: OVERTURE, the excellent and recently finished prequel to the classic SANDMAN!

Cliff Chiang’s art is fantastic as always on this issue. As I said, he effectively conveys the mysterious actions of the Ragged Visitors (I’m sticking with these names) even without their dialogue, and another remarkable dream sequence (this time with an ice-skating Ronald Reagan) as Erin fades out of consciousness. I’d also like to take a moment to reflect on Matt Wilson’s stellar colors, both in the cover design and the issue itself. Simultaneously presenting Cleveland at midnight alongside two different unknown races, futuristic technology, and dinosaurs is no easy task, and this is an exceptionally complete package. And it’s still $2.99! With good paper! And no ads (until the end)! 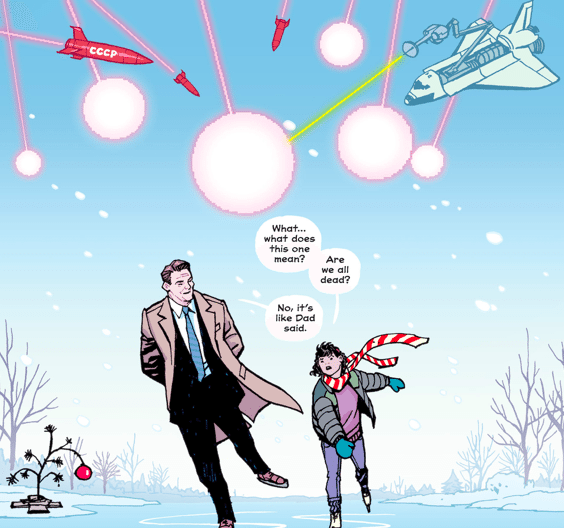 PAPER GIRLS continues to be my favorite comic of the week (though THE VISION and PLUTONA are giving it a run for its money) as the mysteries build alongside carefully planned character interaction and development. It’s always a good thing when you want more of a comic immediately, and I’m sure once this first arc ends with a planned hiatus I’ll be mourning until it returns. Until then, there’s plenty to enjoy. Pick this comic up now!