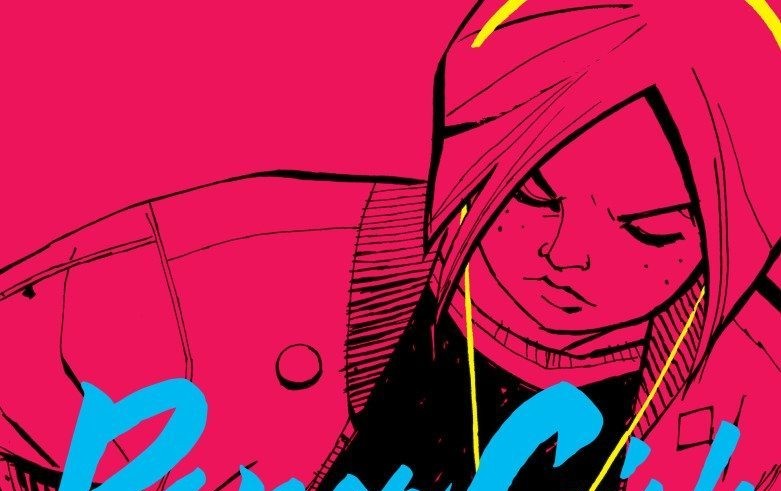 PAPER GIRLS #2 ramps up the action from the first issue considerably. While the first issue took time to introduce the girls, this issue builds upon the mystery of the visitors from the future (or whatever it turns out to be) while focusing on character, the relationship between the girls, and the increasingly disturbing morning after Halloween.

As this issue opens, the town is deserted, save for the girls and very few other humans. Obviously Vaughan isn’t going to lay all of his cards out right away — it makes the mystery much more enticing — but there’s clearly something happening with time. Probably space, too. The uncertainty of the situation adds to the tension, as does a certain page that I won’t spoil, though it introduces some new, likely time-displaced players into the plot.

FIND OUT: what Marius thought about this week’s brand new EXTRAORDINARY X-MEN #1!

The girls’ trial in this issue is to find protection. They ponder their situation, grow as friends, and eventually make it to Mac’s house to retrieve her father’s gun. Again, this comic is constructed as Stand By Me mixed with War of the Worlds, alongside Vaughan’s storytelling style. So, as we see, something initially simple can lead to massive issues. In this case, Mac’s mother has become highly apathetic and returned to her vice, alcohol, as she believes the sudden departure of the town’s residents to be the rapture. There’s been a fair bit of Christian imagery, but I doubt it’s as simple as that. There’s certainly some amount of time travel, and perhaps rapture-esque elements, but it has to be deeper than that. Remember, Vaughan has done a lot of healthy, long-running stories that incorporate many seemingly unconnected elements into a satisfying conclusion.

I’m not sure if it’s the proximity of my reading, but I have found a lot of parallels to HBO’s The Leftovers in this issue of PAPER GIRLS. The absence of townspeople and the overall miasma of despair, as well as the slow burning mystery, has perhaps tied these together more than they have for others. We don’t see much resolution in this issue, but they explore the potentials as Erin considers the Apple logo on the device she confiscated from the invader/visitor/alien? 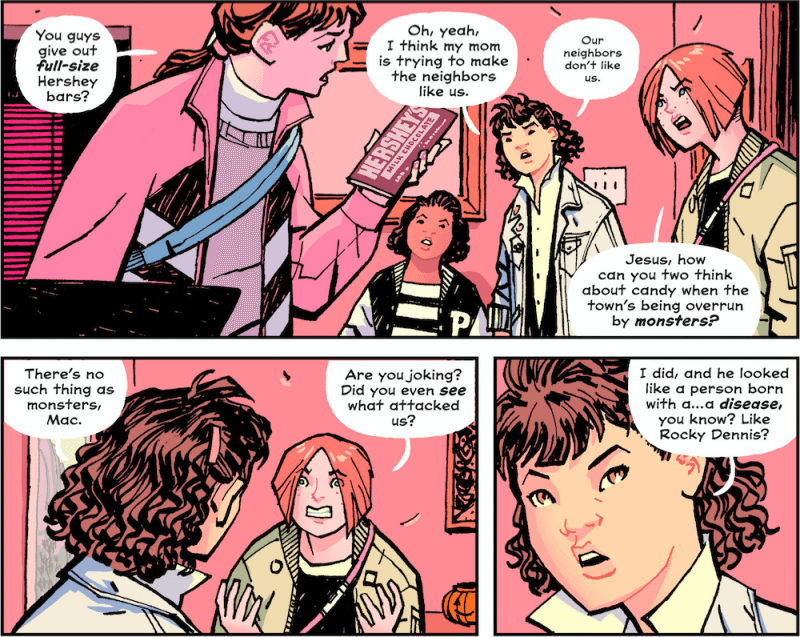 There’s a lot to chew on. The girls are alone, though in a familiar place. Their loved ones have (mostly) disappeared, and masked men have attacked them, run, and seem to pose a yet-unknown threat. This is an ample opportunity for character growth, individually and as a group, and Vaughan delivers some substantial results. We know more about Mac’s dysfunctional home life — and some insight to her gruff exterior — as well as Erin’s insecurity and interests in 80’s popular culture. In fact, the issue is brimming with references to 80’s popular culture, which again really helps to convey a feeling while reading the book. Small touches — a character’s Appetite for Destruction t-shirt, a reference to Star Trek IV (yes, the awesome one with the whales) — cement this book in 1988, as does the design and coloring scheme throughout.

Cliff Chiang and Matt Wilson continue to deliver magnificent art, page after page. The color palette is Spartan and deliberate, bathing outdoor scenes in dark blues and purples while indoor scenes have that unearthly look of dim light that’s hard to explain. Chiang’s dynamic art, still a far cry from his work in WONDER WOMAN, conveys a fitting sense of time and panel-to-panel action. Not to mention his time (or reality?) distortion effects! 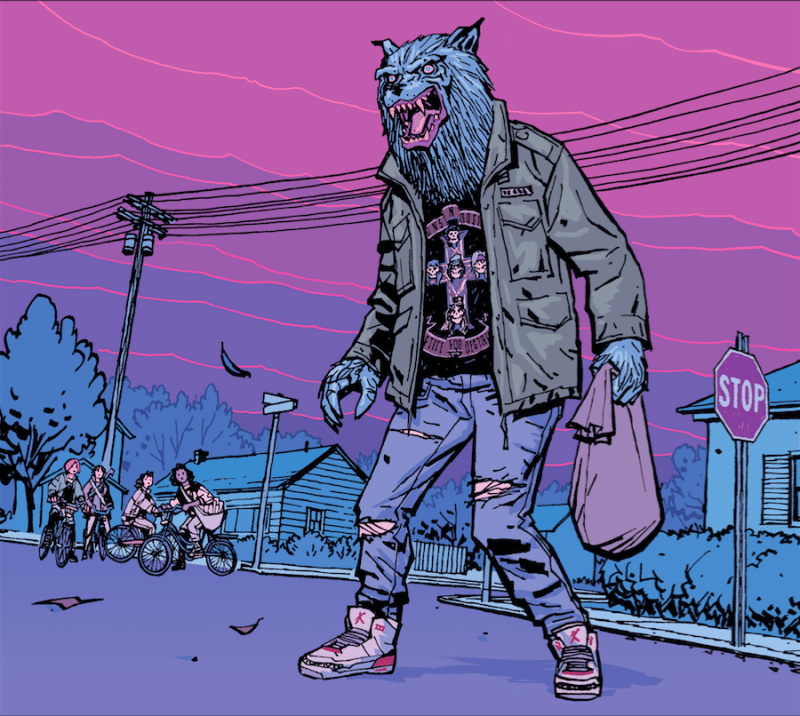 PAPER GIRLS continues to excite the comic book reader in me, perhaps more than anything else this week (though I did pick up KLAUS, which should be great, and the always-solid NINJAK). The second issue is a bit more intimate than the first, though the mystery is much more compelling for it. I can’t wait to read next month’s issue; it’s at the top of my pile every time, and I expect it to stay there for quite some time!

Check out more REVIEWS from ComicsVerse!