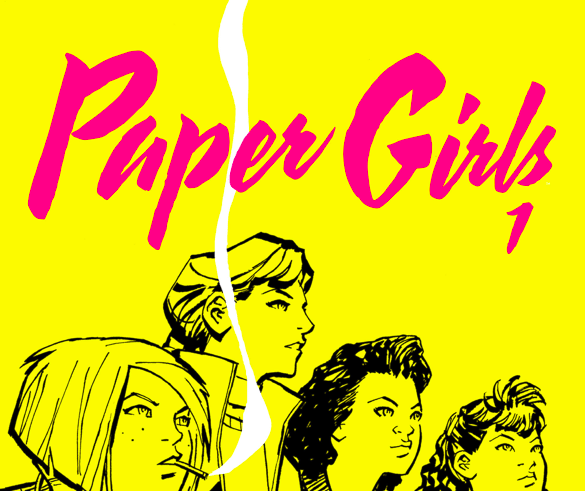 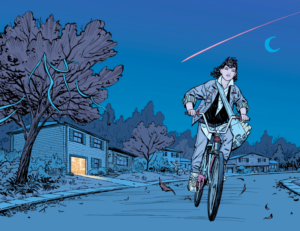 I’ve followed Brian K. Vaughan’s comics for several years now. I must have read his ULTIMATE X-MEN comics, though I tended to skim a lot in high school (sorry Dad!), but he really caught my attention with the 2006 miniseries DR. STRANGE: THE OATH. I thought it was a brilliant depiction of Dr. Strange, his relationship with Wong, and it introduced me to Night Nurse! Marcos Martin’s art was particularly wonderful as well. After THE OATH, I followed Vaughan closely, reading Y: THE LAST MAN, catching up on EX MACHINA, and of course SAGA. I went back and read RUNAWAYS, and I was delighted when he and Martin reteamed for THE PRIVATE EYE (which you should read right now, it’s on the internet, and a really nice hardcover is coming out next month). Naturally, I was excited for PAPER GIRLS months ago, and it’s a treat to finally read the first issue (which is also $2.99 and oversized, something especially appreciated on a week where Marvel decided to upcharge nearly all of their comics for a few extra pages of story).

READ: Jake’s review of PLUTONA, another of Image’s recent number ones! 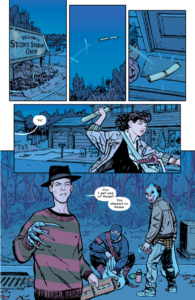 Writer/artist synergy is extremely important in comics, and I feel that Vaughan and his collaborators are among the best in creating stories that read and look as good as the other. I’ve been interested in Cliff Chiang’s work since GREEN ARROW/BLACK CANARY, and he’s as stunning as ever, with an exceptionally stylized book that really evokes the feeling of late 1980s films and television. I believe that this comic was described as “Stand By Me meets War of the Worlds,” which is quite apt even upon the conclusion of this first issue. I won’t spoil anything, but Vaughan gets the vibe of the late 1980s without too much in the way of pop culture references or overt exposition. 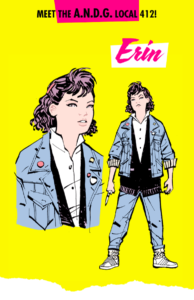 PAPER GIRLS follows four, well, 12-year-old paper girls, on the morning after Halloween. Since it is a notoriously dangerous night/morning, they have elected to travel their routes together in order to safely navigate the streets of Cleveland suburbs. Note: as an Ohioan myself, the location looks quite accurate, even 27 years later. It’s always nice to see my home state in things not related to astronauts or dead presidents. Anyway: as two of the girls are attacked by mysterious robed figures (in “bad ghost costumes”), the girls track them down to recover their stolen walkie talkie. They are then embroiled in…something odd. It’s not clear yet, but that’s great, and lends to the mystery of the series. Vaughan has a long history of teasing plotlines through several issues—just look at some of the twists in RUNAWAYS or Y! Long term plotting—good idea.

READ: Our review of BKV’s other new comic, WE STAND ON GUARD!

Have I mentioned yet how wonderful the art is? Cliff Chiang is giving it his all. His most recent WONDER WOMAN work allowed him to draw (and design) a wealth of interesting, mythological settings and beings, battles and so on. So far, PAPER GIRLS is a significant departure in content, though his style is constant. The early morning setting of this issue has let Chiang and colorist Matt Wilson bathe everything in twilight. The palette that Jared K. Fletcher has chosen for the trade dressing is evocative of 80s designs too—I find myself thinking of Prince most frequently while reading (and re-reading, and re-rereading…) this issue. He’s done some stunning design here; considerably different than most other Image titles, and very pertinent to the overall feel of the book.

This was a huge week for comics. Marvel released a load of new issues, DC started BATMAN & ROBIN ETERNAL, Valiant started a new arc in IMPERIUM (review coming shortly!), but I feel confident in saying that this is the best of the week—and not just because I’m reviewing it! Go out there, buy PAPER GIRLS. Tell your friends to buy PAPER GIRLS. Buy extra copies and force your friends to read PAPER GIRLS! It’s for everyone!