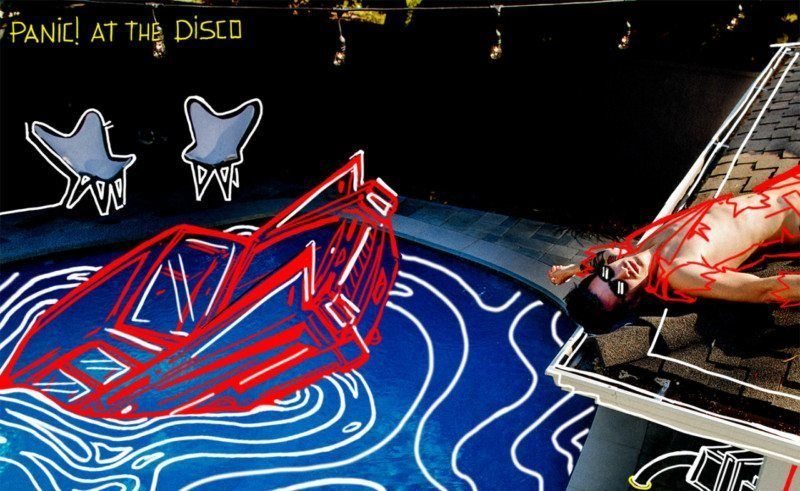 Panic! At The Disco has come a long way from their days as a Blink-182 cover band in 2004. Their most recent album, DEATH OF A BACHELOR, debuted at number one on the US Billboard 200, selling 190,000 album-equivalent units in its first week. Currently, several of the shows for their 2016 summer tour with Weezer are sold out around the world! However, the band has also been nominated for awards from the start. Both MTV and the TFM Awards gave their Video of the Year award to the band’s “I Write Sins Not Tragedies” music video in 2006.

So, how did Panic! At The Disco survive throughout the years? As things stand, lead vocalist Brendon Urie is the only original member left. In 2009, the band suffered a split due to creative differences. In an interview with ANDPOP, Urie and drummer Spencer Smith discussed how they didn’t have to compromise their song lyrics anymore, and could focus on their new perspective. Both Ryan Ross, guitarist and principal songwriter, and bassist Jon Walker left and formed their own band, The Young Veins, in order to explore a more retro-rock sound. On the other hand, Urie wanted to refine the band’s original variety of pop music sounds. Smith unofficially left the band in 2013 right before Panic! At The Disco’s fourth album release, due to drug addiction and other health-related issues. He officially left in 2015, leaving Urie to write the band’s latest album, DEATH OF A BACHELOR.

It’s safe to say that Urie became an irreplaceable cornerstone for Panic! At The Disco. Not only did he become the face of the band, but also he stayed true to the band’s original sound while transforming it at the same time. It’s no wonder since he sincerely dedicated himself to its growth from the beginning—he picked up a smoothie job and sang for tips to help pay for the band’s practice space, and even forfeited his education to go all-in for music. Plus, he has worked on lyrics since their first album, A FEVER YOU CAN’T SWEAT OUT.

So what is it about his lyricism and the band’s music that made it so irresistibly popular? Well, the songs come from a lot of Urie’s deeply personal experiences. That can be said for most music, but for Panic! At The Disco, these experiences are filtered through animated, theatrical, and old-school yet modern lenses. Urie’s unique way of experiencing life and sharing his experiences through the band’s music appealed to a whole generation of misfits. Fans really connected to the originally emo pop punk band, feeling like Panic! At The Disco captured their experiences, too. As the years went on, the band transformed just like its fans, reaching a more mature sound and outlook on life. In any case, the best way to understand the appeal of Panic! At The Disco’s music is to analyze their songs!

READ: Take a look at The Strokes’ success in the music industry in this article!

Urie grew up Mormon, and although he’s distanced himself from the church, he references a lot of religious imagery in his songs. “I Write Sins Not Tragedies” takes place in a church during a wedding. The song starts with the line, “Oh, well, imagine, as I’m pacing the pews in a church corridor.” Urie notes on Genius.com that he grew up in a strictly religious household, and he will never be rid of the religious aspect of his life. Since only 3.1% of the US population is strictly atheist, it is likely that many fans can relate to the feeling.

His song “Hallelujah” from his most recent album has a more positive take on the subject. He comments that, while it meant nothing to him when he said it in church, he learned the word’s powerful meaning through music. He cites Jeff Buckley and Leonard Cohen’s “Hallelujah” songs as inspiration. The song is extremely focused on coming to terms with his life up until now. It opens with a familiar religious zeal that anyone who has been to a church will recognize, then follows through with a confession of sins and self-absolution. Whether the listener is religious or not, the experience of feeling the weight of guilt and coming to terms with it is rich in this song.

Urie makes his sexual experiences no secret to the public. He candidly admits his open idea of sexuality, noting in a radio interview with Zach Sang and the Gang that he would definitely “make out with [Ryan Gosling’s] face” if permitted. His sexual exploits, failures, and regrets are laced in songs like “I Write Sins Not Tragedies,” “Miss Jackson,” and “Girls/Girls/Boys.”

According to Urie, “The lyrics [in the first song] are about infidelity, the sins that I felt were being committed by my friends. A sin is something you commit and a tragedy is the person who has a sin committed against them. You can be powerless until you make your voice heard. At that time betrayal was huge. I had this friend, Eric—we were really good friends and he knew I was really into this girl and she and I had been talking for a while. I was smitten over this girl. And I was slow at making a move because I was just so nervous. Next thing I heard: they were f—ing. And that just broke my heart.”

CLICK: Look at Alex’s article on sexuality in ORANGE IS THE NEW BLACK!

Similarly, “Miss Jackson” from the album TOO WEIRD TO LIVE, TOO RARE TO DIE is about some complicated feelings over casual sex. In an interview with MTV, Urie admitted that the song was about his high school days when he would play around with girls, and not care about their feelings. “‘Miss Jackson’ is about something that actually happened to me when I was younger. I hadn’t really talked about it, and I felt that if I didn’t, I would keep thinking about it, it would drive me crazy,” he said. “When I was younger, I would mess around; I’d sleep with one girl one night, sleep with her friend the next night, and not care about how they felt, or how I made them feel. And then it happened to me and I realized ‘Wow, that’s what that feels like?'”

For better or for worse, sex plays an important part in many people’s lives. Urie captures all aspects of personal struggle related to the subject in his music. From jealousy to experimentation, fans can definitely understand where he is coming from.

Songs like “Lying Is The Most Fun A Girl Can Have Without Taking Her Clothes Off,” “Nine in the Afternoon,” and “This is Gospel” are a testament to the power of friendship. Sex and love aren’t the only passionate experiences in a personal life, and these songs prove that. Urie wrote the first song for the band’s original guitarist, Ryan Ross. Ross’ girlfriend had cheated on him, and during a heart to heart, Urie asked him about how he felt. According to Urie, “[Ross] was like, ‘No, you know what? I bet when she is fucking this other dude she is saying my name.’” So the song was written from Ross’ perspective, full of bitter criticism and clever cynicism.

The latter songs are about Urie and Spencer Smith’s relationship. From 2009 to 2015, both musicians were the band’s only original members left, which gave them a lot of room to collaborate and bond. Straight up, “Nine in the Afternoon” is about both of them getting high and enjoying each other’s company. The idea of “nine in the afternoon” was something Smith said while they were high. Of course, it’s a hilarious concept, and so it became the song’s hook.

“This is Gospel” takes a much more serious turn. Smith had been struggling with alcoholism and pill addiction, which put a strain on his friendship with Urie. According to Urie, “It was a very confusing time for both of us, trying to assess what we were feeling. I felt helplessness and anger. I couldn’t help my friend. I had tried to inquire of what I could do and what I was supposed to do. And the anger really came from watching him kind of destroy himself. That was really sad. So I wrote this song about him.”

The most iconic part of the song is the line, “If you love me let me go.” Urie wrote it from Smith’s perspective and the song flips between both their points of view, reflecting the struggle on both their parts. Life is not always kind, but friendship can lessen the blow. Whether it’s just enjoying each other’s company, empathizing with their pain, or even struggling with them to care for them, Panic! At The Disco captures it all.

Lessons from Panic! At The Disco

Overall, Urie has written his utterly candid, raw life experience into Panic! At The Disco’s music since the beginning of his career. Now, he is Panic! At The Disco. The songs of a handful of “emo pop rock” kids inspired and resonated with a generation, and Urie has used his creative insight to bring that to maturity. The average teenager growing up in America can definitely relate to all the above themes and struggles they have with them. When they hear these passionate songs, it’s hard not to be moved when that’s their lives being sung out.

From a musical standpoint, Panic! At The Disco has constantly transformed and refined their sound. Critics have attributed an almost ridiculous number of genres to their music, such as emo, pop punk, electro, vaudeville, baroque pop, electropunk, psychedelic pop, psychedelic rock, pop rock, electropop, hip hop, indie rock, synthpop and rock. Their variety of genre labels—and refusal to truly fall into just one of these categories— is a testament to how creative and unique the band is in terms of music. It shows just how the band held on to and even expanded its audience through experimental music and honest, relatable lyrics. They have created addictive, unique music that fans could cry their hearts out to, and let it resonate for all time.