PACIFIC RIM had all the makings of a great film: a respected, visionary director, a female POC lead, multicultural representation, great international settings, and some semblance of a plot. The CGI and anime-inspired cinematography alone was enough to convince me that this movie was going to be great. It sets you up for all these wonderful expectations. Then it utterly shatters them by the time the credits roll.

The film begins well. A little backstory, some gratuitous but utterly gratifying shots of jaegers, and the buildup of what seems to be a mutually respectful, equal partnership between Mako and Raleigh. She doesn’t have to prove her worth to anyone; she’s a respected, skilled fighter with a subdued nature. She’s not a stereotypical tough, kick-ass chick which, by the way, are also just masculine traits transplanted on a woman for the male gaze; this isn’t the only archetype for ‘strong’ female characters.

Mako Mori, at first glance, is a quiet, introspective girl who is equal parts competent and equal parts sensitive. Raleigh and Mako are seemingly drift compatible. This fact sets up the expectation that, given the importance of the jaeger connections and the need for absolutely equality among co-pilots, Mako is just as competent as Raleigh. This fact sets up the expectation that Mako will represent an equal part in the film’s climatic finish. She’s there till the end, supporting and being supported by Raleigh. He can’t save the world without her, and she without him.

This premise is especially significant in an action film as women are already vastly underrepresented in film and television, much less in action films. In fact, Asian women representation in films was only 6% in 2013. The sad fact is that in 2013, women represented the majority of film-goers (51%), but, of the top 100 grossing films of 2013, only 15% of the protagonists were women, 29% major characters, and an abysmal 30% had speaking roles. Speaking roles. That amounts to “hello.” So here PACIFIC RIM sets up the groundbreaking premise of a Japanese female protagonist that acts as an equal to her white male counterpart and isn’t typecast into stereotypical Asian roles such as the eccentric, socially awkward nerd, the quiet yet homicidal weirdo, the oversexed Asian assassin, or the exotic love interest. 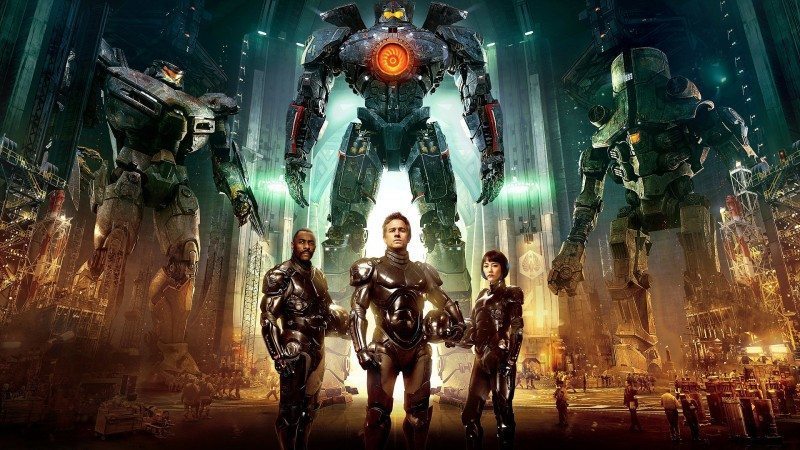 Yet by the end, the film fails to live up to all its potential as Mako passes out right as the fate of the world depends on it. Some nonsense about oxygen, just so Raleigh could swoop in and save not only her but the day, all with no oxygen in a fiery pit. The epitome of masculine heroism. Of course Raleigh escapes to in his own pod, where Mako, having regained consciousness, opens his pit in despair, fearing the worst and shedding a few tears before he wakes (of course, no tears were shed for the death of adoptive father Pentecost). Yes, you could argue that Mako is the true hero at the end of the film having saved Raleigh’s life by opening his pod and performing CPR on him, but this is only a weak attempt to undo the damage that was already done.

My only question is: why? Why was any part of that ending necessary? Why couldn’t both Mako and Raleigh save the day, killing Slattern and sealing the breach together as the premise led me to believe? What was the point of removing her from the finale? Just for yet another ending where the white man saves the day? Why did the filmmakers choose to separate the pilots? Why couldn’t it have been Mako at the end, detonating Gypsy Danger’s nuclear reactor core? If it had been Raleigh who had passed out and removed from the climax, I can guarantee you would have heard a chorus of complaints.

I was led to believe that this film would not be your average, male-oriented, American-centric action film. I was led to believe this was the film which would disrupt stereotypes, thrusting viewers into an unknown world where Kaiju were a thing that actually existed, where mechas like jaegers were believable fighting machines, and where a female person of color could actually take the lead for once. I was led to believe Mako was going to be an authentic, multidimensional human being, not defined by her femininity or by her ethnicity.

This isn’t to say that PACIFIC RIM failed on all fronts. The Kaijus and Jaegers were believable, the CGI amazing, and Mako, for all intents and purposes, actually had all the makings of a great character. The movie had good intentions. It didn’t stereotype, sexualize, or objectify Mako, an uncommon feat for movies in general. Her narrative didn’t revolve entirely around a man. Of course, throughout most of the movie, her conversations revolve almost entirely on how she’s too emotional and fragile to be a pilot despite achieving perfect simulator scores, but, regardless, she’s a competent, skilled, and intelligent fighter with clear and ambitious goals.

She embraces her ethnicity but isn’t defined by it, and, despite the movie’s failure to live up to her potential, is a relatively good representation of an East Asian woman. Even though it doesn’t pass the Bechdel test, an already low bar, the film is not without its merits. In fact, many great films don’t pass the Bechdel test. Sometimes the material doesn’t allow for it. Take Zero Dark Thirty or The Avengers. Both films have superbly crafted female characters whose narrative arcs center around male characters. And yet, these women can holding their own against the male peers, and they manage to do so without passing out right before the most pivotal moments in the film.

Granted, Mako was a force to be reckoned with for 95% of the film, fighting side by side with Raleigh through hoards of deadly kaiju. This is precisely why the ending of PACIFIC RIM was so utterly disappointing. Instead of finishing strong with Mako and Raleigh sending the Slattern together as a join unit back to the Anteverse, she was abruptly detached from the action not only metaphorically but physically, sent up to the surface in a pod just before Raleigh seals the portal. While this one tremendous oversight doesn’t discredit the entire film – it was an entertaining movie with great CGI, a great female protagonist, and an actual decent plot – it certainly makes it unsatisfactory.

WANT more superhero movies? Check out our thoughts on 5 superheroes who deserve another shot at the big screen!

The choices the director makes in regards to storytelling matters. The argument that these choices aren’t sexist but rather creative decisions is ridiculous because, at the end of the day, decisions are born from the perspectives and experiences of those making the decisions. So maybe the director didn’t intend to make misogynistic choices, but the fact that during the entire creative process, not one person realized the rather sexist nature of these decisions is indicative of the entire problem at hand. Even worse is if someone had noticed and said something but was ignored. It’s entirely plausible to offend people without meaning anything behind it; it just doesn’t make it any less offensive. The argument that the director or producers just happened to choose Raleigh over Mako is indicative of their perspective about women and men, whether or not it was intentional. The world is sexist. It’s progressing for sure, but it’s still sexist. Men and women alike can say and do sexist things without even realizing it, without intending it, without believing in it, because they have grown up in a culture which condones, sometimes encourages, sexism. It’s such an ingrained part of our culture that sometimes we can’t even see it when it’s right in front of our faces, blown up on a 30 foot screen.

If you’re going to side-line the female as usual, at least don’t hype it up as if you weren’t.