The Joker was planned to be killed off in the first issue he appeared in. Now he’s the archenemy of Batman and one of the most beloved villains of all time. Similarly, Oxymoron was introduced in 2012 as a villain to ComixTribe’s THE RED TEN. Now, he’s the star of OXYMORON: THE LOVELIEST NIGHTMARE, written by Tyler James and John Lees, drawn by Alex Cormack, and colored by Jules Rivera. This four issue collection is fantastically unique thanks to the startlingly fresh villain at its head. 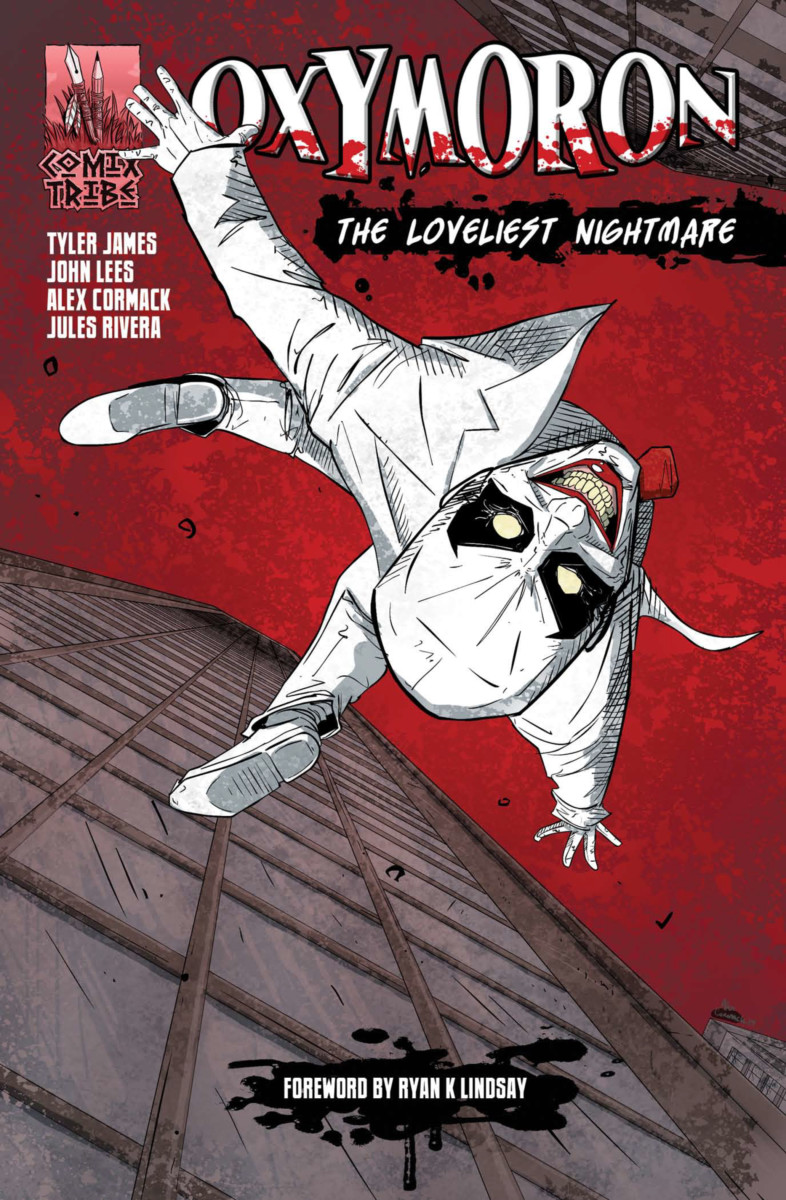 Though Oxymoron might seem like your average villain reminiscent of the Clown Prince, he’s more than that. Yes, he parades around in a ridiculous costume and, as his name suggests, he’s obsessed with contradictions. But Oxymoron is genuinely terrifying. THE LOVELIEST NIGHTMARE is proof that titles about villains can succeed on their own without their respective heroes. Oxymoron crosses the line so completely that it makes you take for granted that there had been a line before. And that’s what he does in this story — repeatedly.

READ: Want to get more into comics made by small publishers? Here is a spotlight on up and coming talent!

Oxymoron’s reign of terror begins when he forces a man to wear his mask and commit suicide. It only gets worse and worse, leading to mass shootings, explosions, and cryptic messages hidden in the skin of his victims. Oxymoron has no qualms about killing and torturing innocents, mutilating women, and blowing up children. As Oxymoron amasses a bigger and bigger body count, the Swanstown police department scrambles to stop him. Oxymoron throws twists and turns, one after the other, so that neither the reader nor the police know what comes next. One over-the-top act of violence follows another, sending the city of Swanstown into an understandable panic. THE LOVELIEST NIGHTMARE is the story of how this town’s people attempt to cope and stop a madman with no discernible goal besides chaos. What’s so different about this story compared to the average Batman-Joker arc? In Gotham, there’s Batman to protect people. In Swanstown, there’s…um, the local police department. 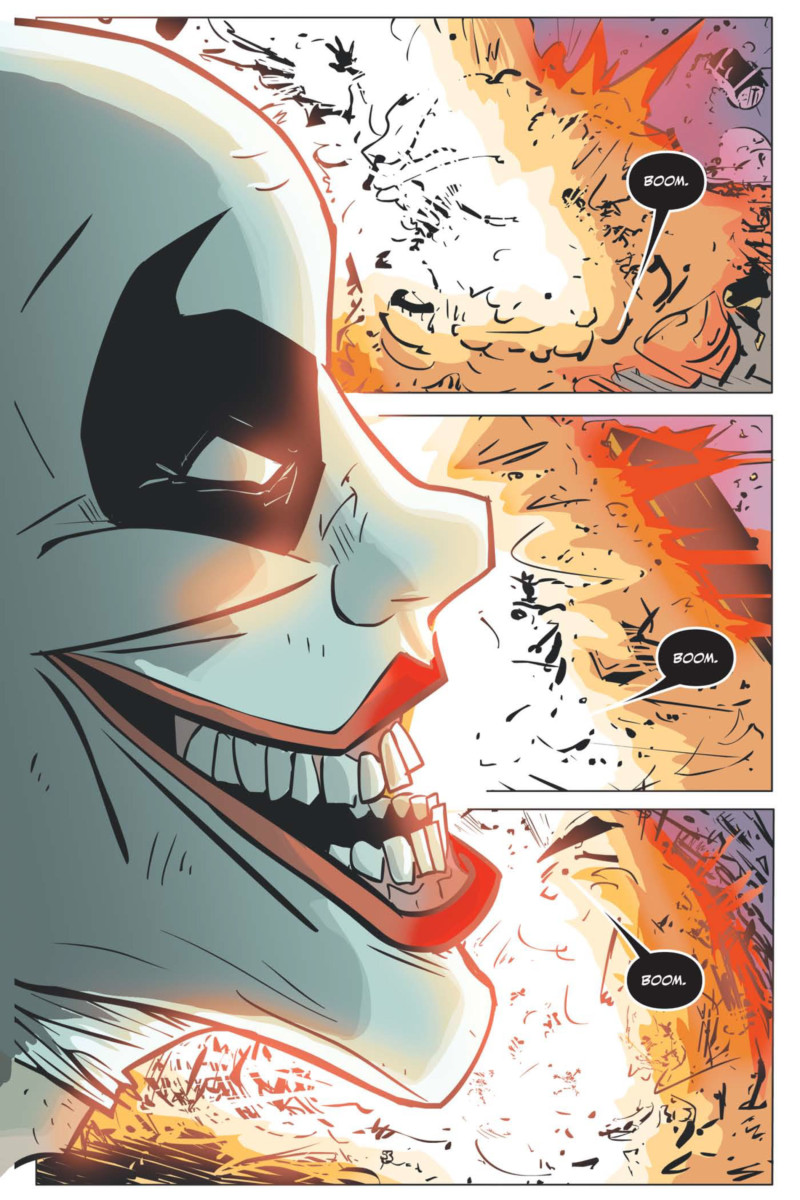 But in this local police department are some truly fantastic and nuanced characters. Our protagonists are Mary Clark, a headstrong black woman who is dealing with some serious trauma and her newbie police partner Deborah Deanie, a queer lady who’s trying not to let the horrors of police work to get her down. While trying to cope with their own struggles, Mary and Deanie, along with the Swanstown PD, devote all their time and energy to stopping the carnage. Writers James and Lees make you care for both the town and its people. Mary and Deborah are lovely, fleshed-out women. I also loved seeing interracial and queer relationships on the page, and a black woman who wears her hair natural while hunting down a murderer? Sign me up for the next installment already!

READ: Wondering why diversity is so important? Here’s an open letter to Marvel about inclusion in comics!

Along with the compelling plot and characters, the art is wonderfully done. Cormack’s illustrations convey the plot well and use smart, artistic conventions in order to tell this story in a way that will drag you in from the get go. Each panel shows real, raw emotion in the characters. The first time we see Mary Clark, we also see the anguish inside of her with each nuanced facial feature, and her struggle in each panel just to wake up and get to her job. Besides that, Rivera’s colors skillfully add to the mood of every page. It creates an atmosphere of normalcy before Oxymoron enters the scene, and an atmosphere of chaos when he does. The art really achieves the status of “show, don’t tell” on every page. 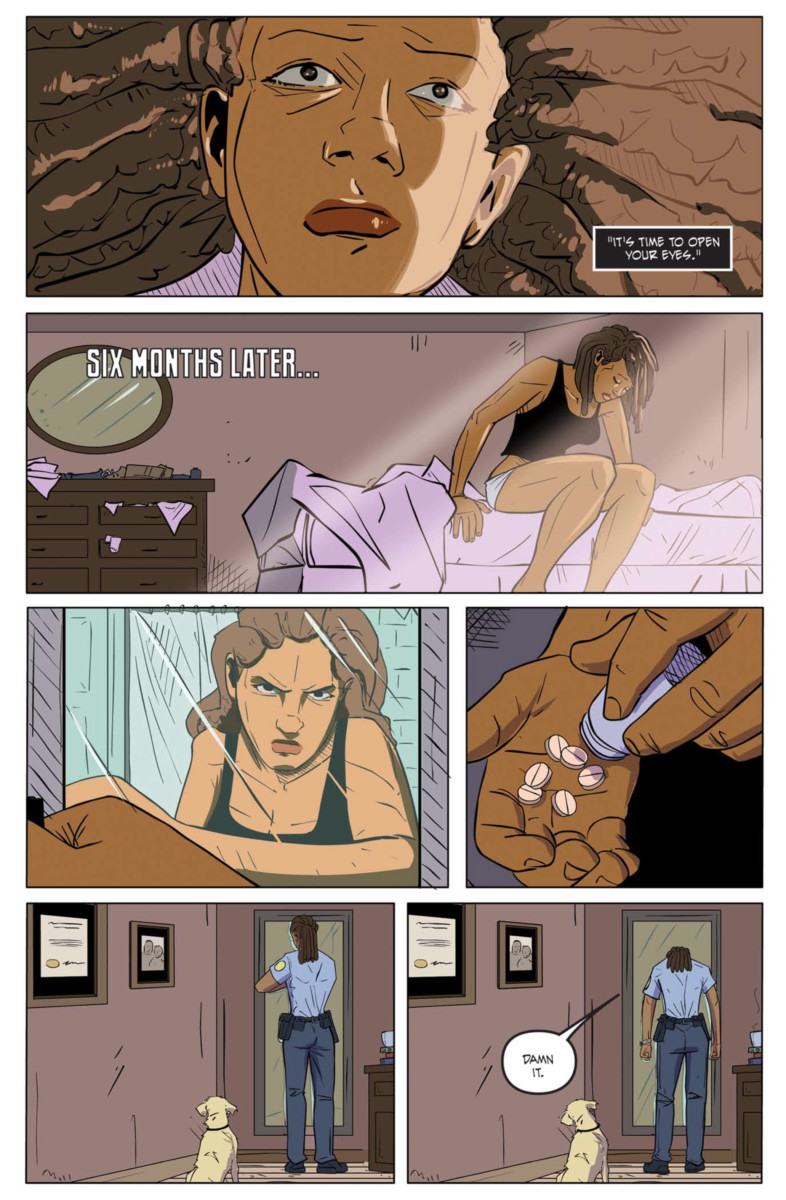 This beautiful journey takes readers into a new realm that feels fleshed-out and real despite the over-the-top carnage going on inside. It really is a horror story, not a crime drama. So if you’re looking for some light-hearted clowny villain causing PG-13 rated mischief, look elsewhere. There is graphic gore, violence, and truly astounding evil committed here. Honestly, this graphic novel really got under my skin. It had my knuckles white, my eyes glued to the page. This book does what a thriller is meant to do — in fact, what Oxymoron himself means to do — it makes you feel uneasy, unsafe, and uncomfortable. Be prepared for a wild ride that will have you rooting for the characters and grinding your teeth every time Oxymoron reveals his next move.