This is Tuned In, a series about all the weird and interesting ways we interact with anime, and the diverse opinions we have about it.

Boo! Did we scare you?

Halloween is synonymous with all things scary, and there’s no shortage of scares in anime! ComicsVerse’s anime and manga team have put together the moments that absolutely terrified us, from things like cockroaches to existential dread.

As a warning, spoilers ahead.

The Tormentor Dancing in YAMISHIBAI 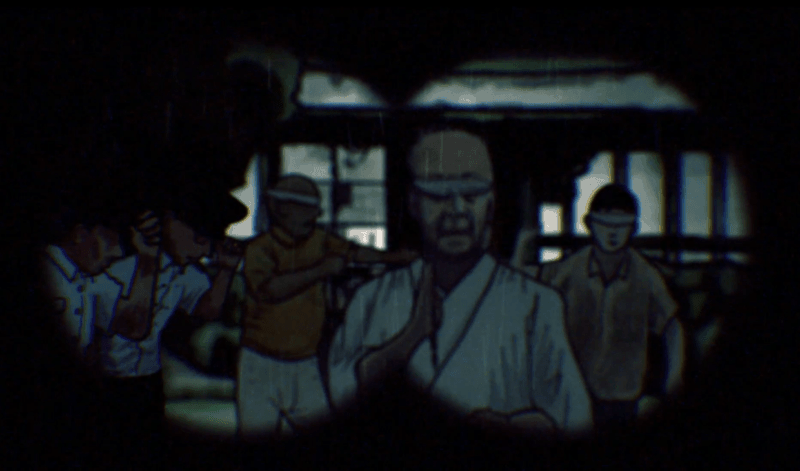 YAMISHIBAI is a horror anthology anime, with each episode covering a different Japanese short story and lasting about 4 minutes. Its animation style is inspired by kamishibai, a form of street theatre in which narrators use illustrated boards to tell a story. Despite the simple style, however, YAMISHIBAI is one of the most terrifying series I’ve ever seen. There are plenty of creepy scenes, but one from the episode “Tormentor” haunts me the most.

In the episode, Shouta and Taichi spy on a neighbor, hoping to see a Tormentor, a supernatural entity you are not supposed to look at. Through a pair of binoculars, Shouta sees some blindfolded people escorting something that’s dancing behind them. But before he can get a proper look, Taichi grabs the binoculars for himself. As he looks through them, he begins to transform before the scene cuts. The next day, Shouta goes to check on his friend, but Taichi’s father says his son will be moving. He sends Shouta away, but Shouta, still curious, uses the binoculars to look back at the house. We then see Taichi, now a Tormentor, dancing quickly towards Shouta.

Since the characters in YAMISHIBAI look like they’re just paper cutouts against a backdrop, Taichi’s movements felt even more unnatural than they would have if they were typically animated. Plus, chase scenes or figures rushing at the camera always get to me, so this was pure nightmare fuel. (Bella Sotomayor)

Mike’s Death in ATTACK ON TITAN 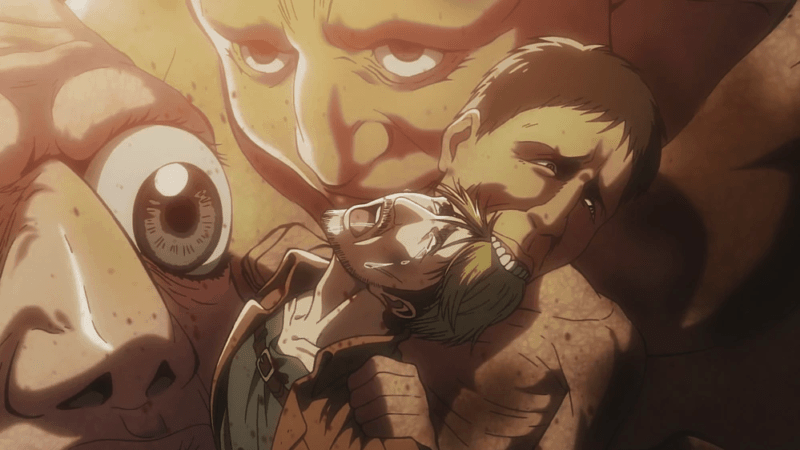 While not technically a horror anime, there’s no doubt that ATTACK ON TITAN serves up some pretty gruesome scenes. And nothing has been quite as gruesome for me as Mike Zacharius’ death in the first episode of ATTACK ON TITAN Season 2. Mike has just ordered Nanaba away to evacuate surrounding villages. He fights and kills five titans, only to come face to face with what he thinks is an Abnormal Titan (later revealed as the Beast Titan). While he manages to avoid his horse being thrown at him, Mike falls right into the open mouth of an awaiting Titan who crushes his leg, but that isn’t the worst of it. Curious about his 3D Maneuver Gear, the Beast Titan tries to question Mike. But when Mike doesn’t respond out of sheer terror, the Beast Titan gives the other titans permission to eat him.

I had read the manga prior to watching this episode, but the vivid colors of the anime mixed with the unnerving crunch of Mike’s bones bring the scene to a whole other level. ATTACK ON TITAN definitely does not lack similar scenes. But what makes Mike’s death hit harder than the rest is the sense of hope given to the audience just prior to the Beast Titan’s arrival. To have this hope completely shattered will leave any viewer rattled. (Celeste Paed)

ATTACK ON TITAN: Being Human through Inhumanity

The Street Attack in PSYCHO-PASS 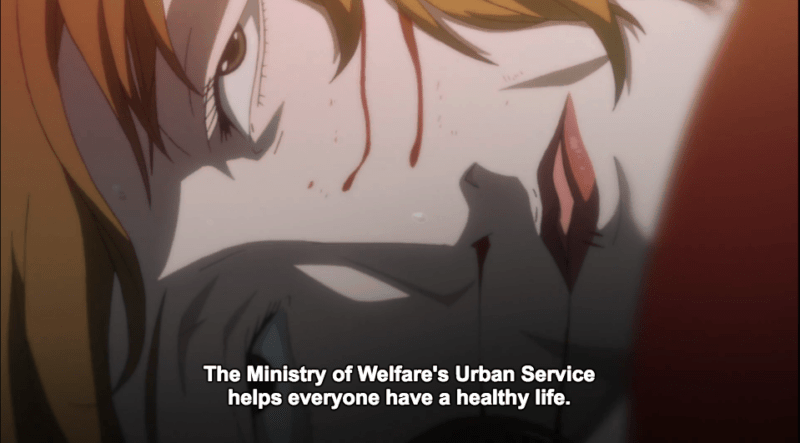 In the world of PSYCHO-PASS, the AI Sybil System removes any human whose mental state is consider a threat to society. The system scans their “crime coefficient” number and removes those deemed unfit for society either through forced confinement or execution. This seemingly ideal system is manipulated and broken in the fourteenth episode, “Sweet Poison.”

In the episode, a deranged man assaults a woman with a hammer in the middle of a crowded street during the day. When a Sybil drone comes to check on the scene, it ignores the attacker, thanks to a psycho-pass nullifying helmet that copies the lowest (and therefore, “healthiest”) number within a radius. Instead, the drone addresses the victim after scanning her psycho-pass number, saying she may need mental care because she is undergoing extreme stress. We watch her get beaten to death. Onlookers stand idly by. Even if she somehow survives the assault, the trauma could ruin her life. Worse still, she could then be forced into a mental confinement facility and labeled a latent criminal.

And the scariest part of the whole scenario? Not only does it nail one of the harshest flaws of the Sybil System, but it uses a prime example of the “bystander effect,” a real phenomenon in which people are less likely to help if other people are present. (Schane Flowers)

Bondrewd’s Experiments in MADE IN ABYSS 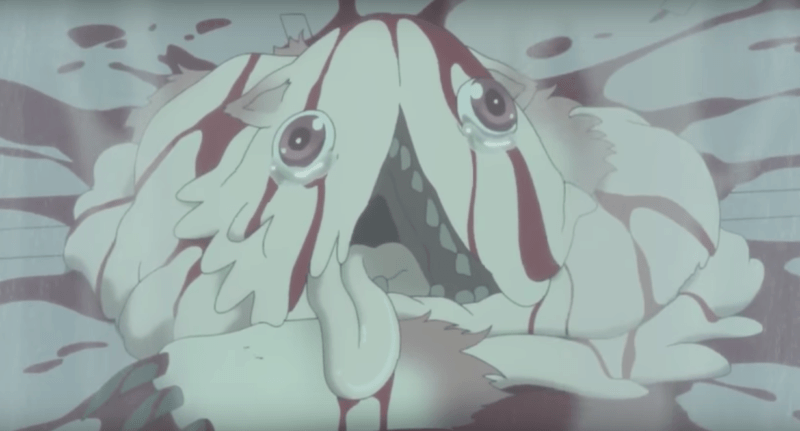 The Abyss, a seemingly infinite deep hole in the middle of society is full of secrets, treasures, and dangerous mysteries. Perhaps the most peculiar is the burden The Abyss inflicts on those who ascend it. As one moves upwards in The Abyss, curses like sensory deprivation or nausea take effect. The deeper you go, the worse the curse when you ascend.

Bondrewd is a legendary Abyss diver and researcher, but his methods are usually illegal and always despicable. Despite that, society allows him to continue because of the results he produces. In order to understand how the curse affects people in some of the deepest levels, Bondrewd drops orphans into the sixth layer of The Abyss and brings them back up. The curse of ascending from the sixth layer is “loss of humanity,” which results in a painful transformation wherein the orphan’s bodies bend, break, and collapse, causing incredible suffering. They become blobs of flesh that can live without food or water. The only thing they are consciously aware of is constant, excruciating pain. And Bondrewd leaves these children in a pit to live in agony.

This type of action is frightening because it really demonstrates how consumed characters become with their desire to “know” The Abyss. Bondrewd’s crimes become even more disturbing when you consider how much every child he does this to loves him, a mentality which is kind of par for the course for the series. (Jay Gibbs)

Anime Watchlist: 5 Horror Anime To Check Out for Halloween

The LCL Scene in END OF EVANGELION 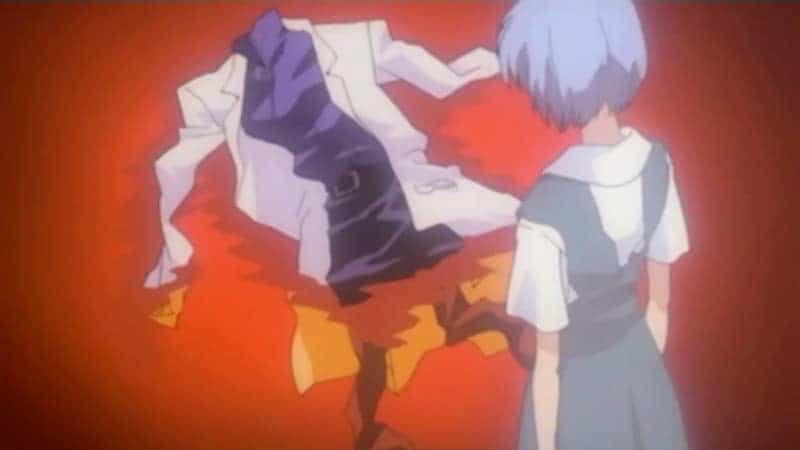 Every anime fan knows about NEON GENESIS EVANGELION, the classic mecha anime. If you’ve ever watched it, though, you’ll know that it leans more into psychological horror than what you might expect from giant, fighting robots. Because of this, it gets pretty disturbing and has a lot of messed up moments. One moment that really got under my skin was the climax of the film, END OF EVANGELION, which ended the series. The entire film has a lot of graphic and unsettling moments, but this scene really stuck out. It’s not necessarily terrifying, but it’s the kind of scary that keeps you up at night.

EVANGELION’s world has cataclysmic events called Impacts caused by the seeds of life, angels called Adam and Lilith. Throughout the show, the main characters use biomechanical giants to fight off angels, but they’re no match for Adam and Lilith. The film ends with the final Impact, which results in the end of humanity. And it is horrifying. All life on earth gruesomely reverts back to primordial ooze, which was originally the blood of one of the seeds of life. We watch in horror as humans dissolve into an orange liquid. All the characters die and there’s no hero to save the day. This scene just fills me with existential dread and I really hate/love it. (Samantha Herrera)

The Cockroach Scene in FRAGMENTS OF HORROR by Junji Ito 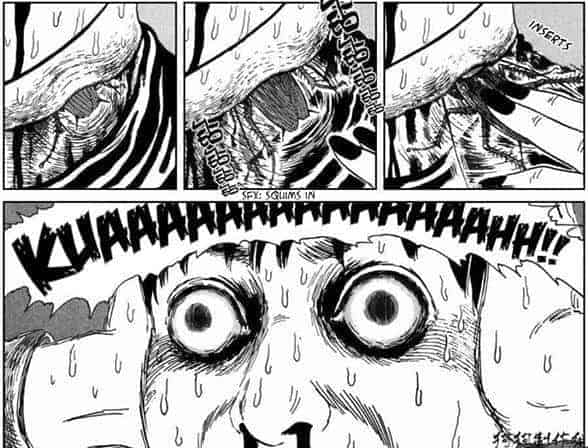 “Tomio — Red Turtleneck” is the third chapter in a series of short stories in Junji Ito’s FRAGMENTS OF HORROR manga. The story revolves around Tomio and a cursed turtleneck that a demon fortune teller gave him. She wants nothing more than to add Tomio’s head to her collection. She curses the turtleneck’s collar (made from her hair) to sever Tomio’s head at the neckline. The catch? Tomio must hold on to his head for dear life if he wants to stay alive, but the fortune teller is still after it. Will Tomio be able to keep his head together?

“Red Turtleneck” was more fascinating than terrifying, but once I got to the cockroach part, I had second thoughts. In this scene, the fortune teller, after finding Tomio in his girlfriend’s house, proceeds to insert a roach into his severed neckline. It was so gross and unsettling that I averted my gaze. I have Katsaridaphobia, the fear of roaches. My phobia began as a kid when I peered into a stereoscope viewer filled with an assortment of insect images. As you’d guess, one image was a swarm of roaches.

Needless to say, witnessing the cockroach insertion scene reminded me of how much I feared these brown critters with their creepy spindly legs. I shudder to even think how Tomio kept his head together in that situation. I would have lost my mind! (Soren Sum)