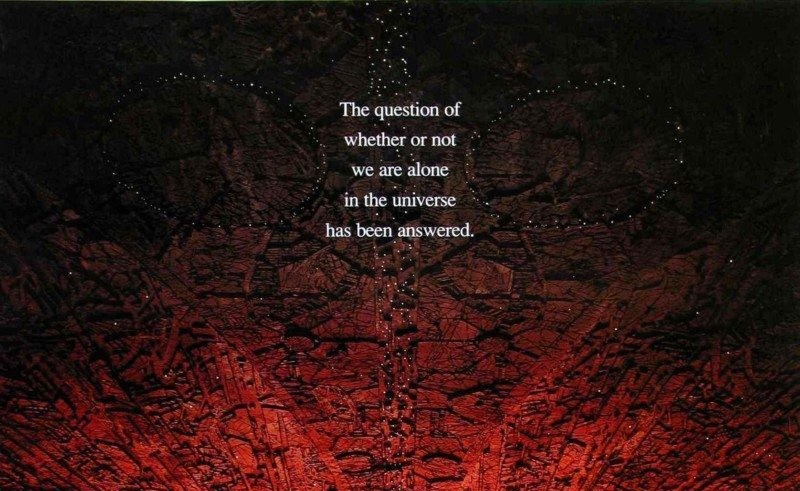 On July 3rd, 1996, the world of blockbuster cinema changed forever. With Roland Emmerich’s INDEPENDENCE DAY (ID4, for short), the era of the Amblin film and Spielberg-influenced blockbusters ended. The floodgates opened to a world of destructive, chaotic, and explosive big-budget films. INDEPENDENCE DAY proved what could be done with the current technology and started a race to see who could blow up the most national landmarks on screen. It was critically and financially successful, raking in over 800,000 dollars (a massive amount at the time) and spawning a sequel twenty years later. ID4 had its imitators and challengers, but none could surpass the extreme awesomeness and originality it brought to the screen. INDEPENDENCE DAY, for better or worse, changed the blockbuster film landscape and ushered in a new era of summer movies.

For those unaware, INDEPENDENCE DAY is the story of the darkest day in humanity’s history. Simply put, aliens attack the earth. Millions die, cities are destroyed, and a select few Americans band together to save the world. There hadn’t been this level of destruction on screen yet, and the fact that it juggled so many plotlines and managed to streamline them all into the main plot was quite impressive. As far as studio pictures go, it’s extremely well-made and still holds up twenty years later. 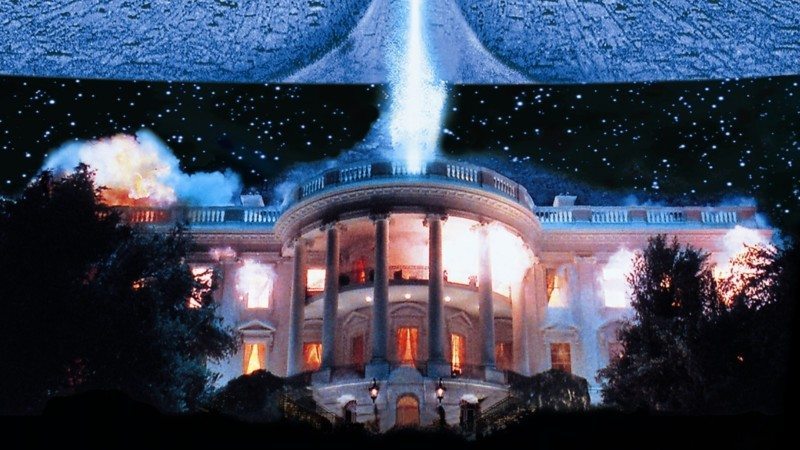 Before this film hit theaters, the landscape of blockbuster cinema was quite different. Films were more hopeful and centered on real-world possibilities. The films of Steven Spielberg and his company, Amblin, had pretty much ruled the box office. Spielberg essentially created the blockbuster with JAWS in 1975, and ruled the scene for the next twenty years. There was, of course, a little series called STAR WARS that elevated the sci-fi genre but in a way more fantasy-esque setting than INDEPENDENCE DAY would. The 80’s saw the INDIANA JONES series, E.T., GHOSTBUSTERS, BACK TO THE FUTURE, and tons more.

The 80’s was a time of positivity on screen in a lot of ways with happier types of films. The good guys always won, dealt with issues that could more than likely happen in the real world, and always seemed to go on some fantastical adventure with little-to-no death on screen aside from the antagonist’s.

The 90’s were much different. The previous style of blockbuster seemed to begin to whither away in the beginning years for some reason. Films like RESERVOIR DOGS and GOODFELLAS started a wave of foul-mouthed crime films that would reach huge levels of success. However, in 1993, JURASSIC PARK graced the screens and showed what the 80’s style could do with 90’s level technology. It was fun, character driven, and full of adventure.

Then, in 1996, INDEPENDENCE DAY happened. It was dark, full of death and destruction, and had insanely incredible special effects. Many still site JURASSIC PARK as the film that showed what could be done with new and updated technology, but it was ID4 that blew the roof off the place.

Things like giant alien ships blowing up the White House simply hadn’t been seen on screen before. Most people never even dreamed of something like that. To this point, the biggest alien invasion film was probably CLOSE ENCOUNTERS OF THE THIRD KIND, which wasn’t even really about evil aliens. ID4 was something new all together, like an episode of THE TWILIGHT ZONE, bringing a sci-fi concept in to viewer’s reality with a massive budget and the willingness to destroy everything.

One could argue that the ALIEN franchise was a precursor to this, but those films took place in space and only ever featured a small band of humans. There is also the argument for the TERMINATOR franchise, which centered on murderous robots and the end of the world, but the world-ending destruction was only ever glimpsed at in those films.

READ: Is it too late to save the JAMES BOND franchise?

In essence, INDEPENDENCE DAY was something new, something that people never realized they wanted. It seemed like everyone saw it, enjoyed it, and bought it again on VHS, so why wouldn’t Hollywood, the great imitator of our time, try to recreate it?

This imitation is what caused the downfall of the original type of blockbuster. There was a tectonic shift in the foundation of the genre from character to creature, from spectacle to destruction and from story to special effect. It killed the Amblin way of filmmaking and began the era of peril on the big screen, one that often forgot who the films were made for in the first place and placed more concern on which films were the biggest and most destructive.

It is hard to tell where and when this great imitation of destruction got out of hand. Perhaps it was in 1998 with the almost simultaneous releases of DEEP IMPACT and ARMAGEDDON? Both of which featured giant asteroids destroying cities, landmarks, and millions of people to much financial and little critical success. They took ID4’s ideas of destruction and put it in more “realistic” terms with astonishing scenes of hell raining down upon earth from space. Let us not forget that the STAR WARS prequels were currently released at this time, which had more green-screens than it did practical sets and showed the true horror of what would happen when these new technologies got out of hand.

At the root of all of this, in the age of sequels, remakes, and reboots, is what happened in the late 90’s. After INDEPENDENCE DAY, it became a race to see who could make the bigger movie. Who could destroy the most landmarks? Who could kill the most people? People judge big films in comparison to the others, and how can studios ever dream of meeting expectations while crafting new and original intellectual properties? How can one expect to make money from a new property when audiences want what they already know?

As Hollywood quickly exhausted viewers with space epics centered on ending life on our planet, they needed something else to feed viewer’s appetites. With nowhere to turn and nothing left to destroy, studios turned to comic books for inspiration. The X-MEN and SPIDER-MAN films ruled the box offices in the early to mid 2000’s and by the time the decade ended, the Marvel Cinematic Universe was in full swing, re-hashing the same story over and over again.

READ: How Netflix’s new VOLTRON series is the feminist cartoon you’ve been looking for!

Gone were the human heroes of the old ways, the original stories that featured real world heroes going on fun adventures carried by the weight of its characters. How can a studio top the latest releases with just regular humans? Of course they have to be super to be bigger and better. That much is apparently obvious.

This is not to say that the current blockbuster films are not good, and that the “fun” ones were the better ones. However, one must only take a cursory glance at recent box office reports to see the truth. Original blockbuster films are almost nowhere to be found while the third CAPTAIN AMERICA movie makes more money than some small countries.

It’s like any product market. People want what is bigger and better, and that comes in the form of steroid-fueled sequels and remakes. Much like the latest iPhone is bigger than the last one, people flock to updated versions of what they already have. Look at GHOSTBUSTERS, for example. Instead of making a new adventure with its star-studded cast of female leads, it’s a rehash of something a bunch of dudes did twenty years ago but this time it has some CGI. 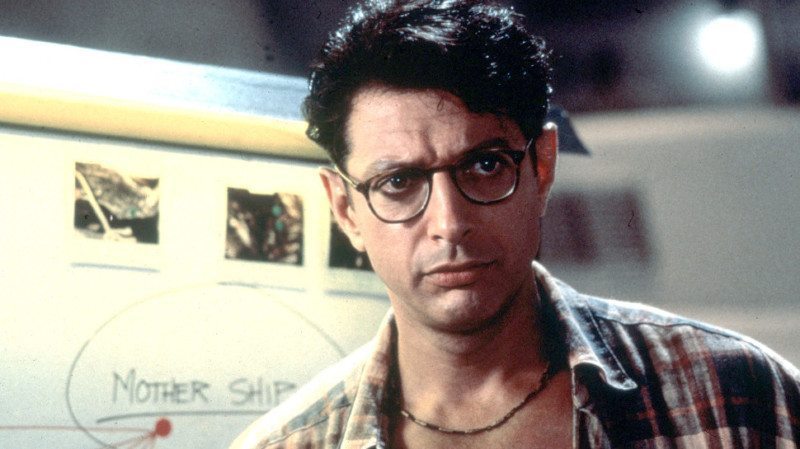 INDEPENDENCE DAY is not to blame for all of these problems. It isn’t causing studios to budget for remakes and sequels and it isn’t telling people to ignore new films in favor of the latest superhero flick. It did, however, prove that destroying something on-screen was as entertaining as anything else. It started a race to be the biggest and craziest. On the eve of yet another TRANSFORMERS film in the near future, that race has yet to end.

The truth is that there are good films out there, this is certain. These films just aren’t what they used to be. ID4 is massively entertaining and still holds up today compared to the majority of major releases. However, outside of comic book films, how many characters can one name from the past few years of films? How many moments of dialogue between two characters seemed to matter? How many buildings have to be destroyed before we forget what characters even are? INDEPENDENCE DAY isn’t great because it blew a ton of stuff up. INDEPENDENCE DAY is great because it had characters to deal with all the stuff that was blowing up. Unfortunately, Hollywood didn’t notice that. It saw it as a testosterone-fueled challenge to be the biggest and most destructive, and is so strung out on the performance enhancing drugs of destruction and computer-generated effects that it is merely a skeleton of what it once was.