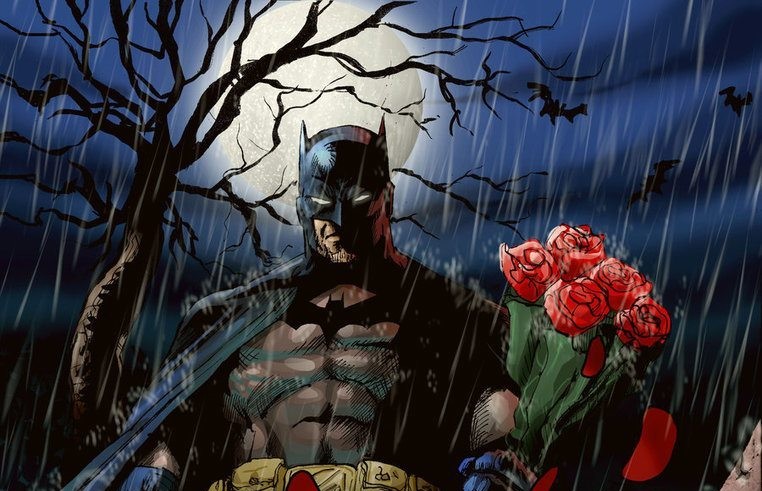 What do Spider-Man, Batman, and Superman all have in common? Well, besides being the three most recognizable superheroes of all time, they are all orphans. Loss of a loved one (especially one’s parents) is a recurring theme in dozens of superhero origin stories. Why has this become a trope in superhero stories, and what role does it play? 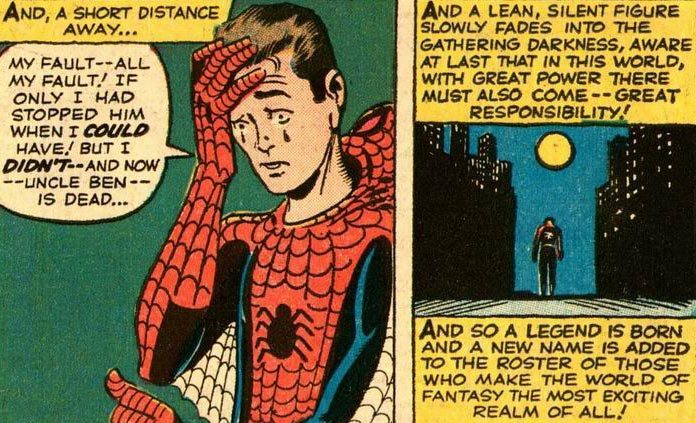 Loss of a loved one is often used in comics as a motivator for someone to take vengeance on the wicked as a superhero. Frank Castle became the Punisher after his family was murdered by the mob. Batman devoted his life and wealth to fighting crime after his parents were murdered during a mugging. The murder of Matt Murdock’s father inspired him to fight crime by day as a lawyer and by night as Daredevil. Every loss is different for each hero. Some characters became superheroes before they experience a loss and some after. Loss is not the sole defining factor in each hero’s life just as it is not the sole defining factor in a real-life person who lost someone. However, one can’t help but notice how many superheroes are plagued by the deaths of loved ones.

READ: How VENOM is a metaphor for addiction and mental illness!

From a storytelling perspective, it’s an easy narrative tactic because it gives good motivation (or justification) for our hero, as well as drawing the line between the “good guys” and the “bad guys.” It also serves as a divider between the hero’s experience before loss and after. Before, they were weak and afraid because of the loss of a loved one. Becoming a superhero and using their powers and abilities is a way for them to no longer feel helpless by causing change in their world. 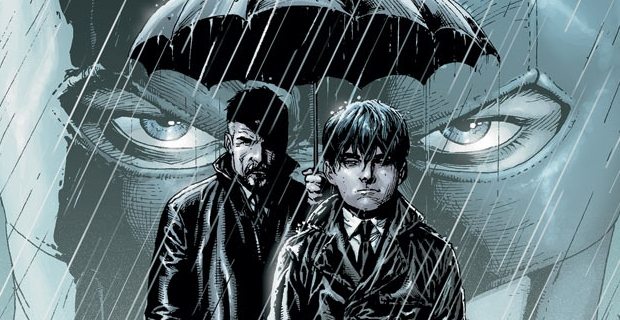 However, in losing a loved one, a superhero is affected by what many people have identified as an “alienation factor.” Loss separates our heroes from the rest of their culture. It’s all-consuming. The loss of a loved one and the grief that follows makes it harder to relate to others. This is played up to the extreme with Batman. Loss completely changed his behavior.  After the death of his parents, he used his wealth to turn himself into a caped crusader. Dressing up like a bat and beating criminals senseless is not what society would deem as normal behavior. One could argue that it’s even a part of his grieving process. Batman is forever changed by his loss, and crime fighting is his attempt to rejoin society by protecting other citizens from the same fate he suffered.

This fits in with the Western heroic ideal–a mysterious loner who has extraordinary abilities and fights evil wherever it rears its ugly head. Westerns are a great example of this, and they aren’t that different from superhero comics. The hero in a Western movie is typically a stranger about whom little is known. They are skilled gunfighters and rid the town of bad guys. They gain acceptance from their peers after being alienated by loss via the use of their power. But ultimately, they don’t belong. That’s why they always leave town at the end and ride off into the sunset, much in the same way Batman returns to the Batcave.

Superhero-ing is in many ways inherently tied to loss and grief. Even superheroes whose origin stories don’t include a loss of a loved one are affected by it at some point. The purpose of a secret identity is to protect the protagonist’s loved ones from villains who would go after their families and friends to get to them. It’s often only a matter of time before our hero’s friends and family become victims of our hero’s enemies.

There is enormous potential to do good for kids who have lost a loved one. Many kids unfortunately lose a parent or sibling, and it’s a struggle that isn’t addressed too much. What better way to talk to kids about grief than through superheroes? In my experience, comics as an industry attracts outcasts–people who have had trouble fitting in and find their place when they discover comics. Grief can also be very isolating. Comics can help kids who’ve lost someone they loved by showing the internal battle that happens with grief every day. This has been done well in the past. In FANTASTIC FOUR issue #588 by Jonathan Hickman, Spider-Man consoles a grieving Franklin Richards after the death of Johnny Storm, his uncle/the Human Torch. 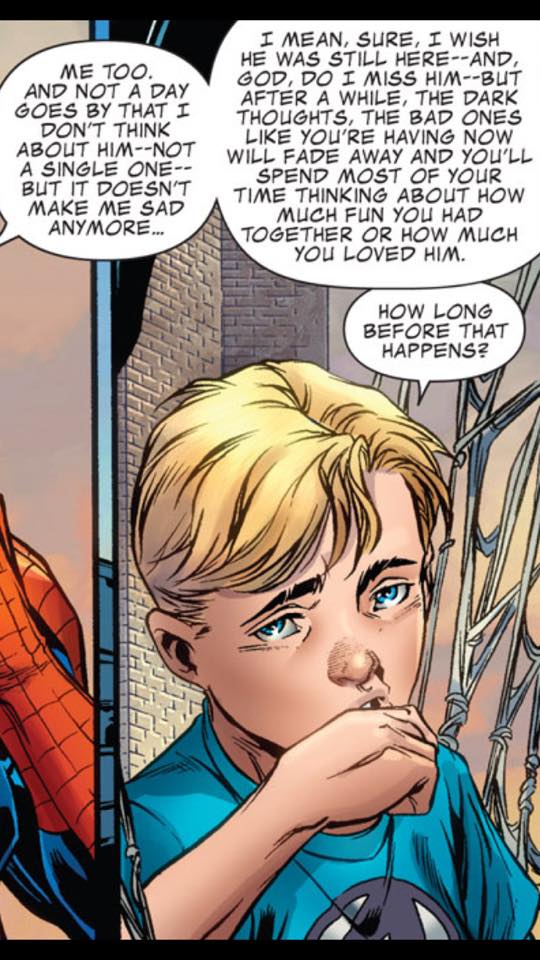 I love this because it shows that Spider-Man’s healing process was a lot more than putting on a mask and beating up bad guys. He learned so much and grew as a person while still being affected by his loss on a daily basis.

READ: An open letter from our CEO about how comics saved his life!

Even though superheroes are fictional, the lessons they teach us are real and can be applied to times when life is too much. Comics, like all media, are an escape from everyday life. Kids need to learn that what they feel is okay and that grief doesn’t have an expiration date. But that’s okay too. Perhaps the real appeal of superheroes dealing with loss is to serve as a reminder that though all our favorite heroes are super, they’re also human.