Almost two weeks after the end of NARUTO: SHIPPUDEN, the NARUTO franchise returned yesterday with a third anime, BORUTO: NARUTO NEXT GENERATIONS. The series, which centers on the next generation of ninja, was announced last December, and since then fans have been wondering what the next chapter in the story will look like. Unexpectedly, the opening scene of BORUTO’s first episode gave us a glimpse at what’s in store several years down the line, and despite the colorful marketing for the series, the show’s future doesn’t look bright.

The premiere opens with the Hidden Leaf Village in ruins and the Seventh Hokage (Naruto) either incapacitated or dead. An older version of Naruto and Hinata’s son, Boruto, is locked in combat with the man seemingly responsible, Kawaki, who tells him that the age of the shinobi is over. In response, Boruto ties what appears to be Sasuke’s headband around his head, declares he’s “still a shinobi,” readies an eye technique as a seal covers part of his body (seen below), and the two resume their battle before the series jumps to the past. 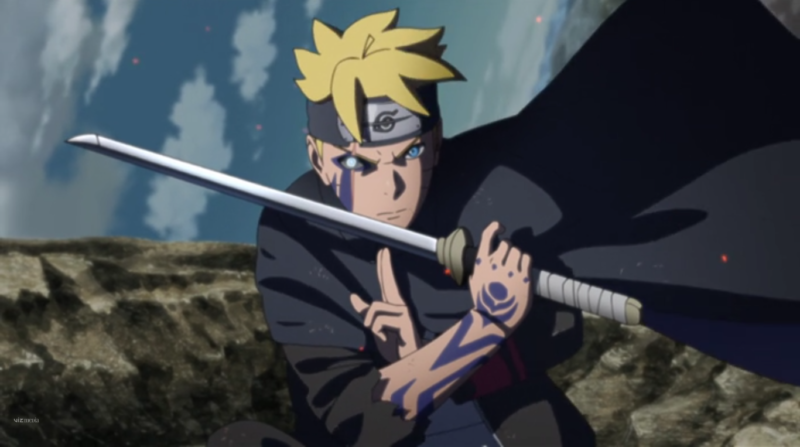 Being a shinobi and finding your ninja way were such huge components of the previous two NARUTO series, so for BORUTO to immediately place those things in jeopardy (along with potentially eliminating Naruto at some point, however unlikely that may be) is a clear sign that the anime is capable of shaking up the franchise’s formula. This was already obvious to people who had seen BORUTO: NARUTO THE MOVIE or read the manga, but it’s reassuring that the BORUTO series came right out of the gate with something so bold (and in the form of a flashforward, no less — a first for the series).

READ: In need of something cute and surprisingly deep? You should be watching MISS KOBAYASHI’S DRAGON MAID!

It’s also cool to see that the NARUTO franchise will again engage with the question of whether or not shinobi are necessary in this new age, as this wasn’t fully developed in the BORUTO movie. For context: in the film, the Hidden Leaf Village’s Scientific Ninja Tool Team has developed a way to store and release sealed jutsu, allowing anyone to wield a technique without training. This calls into question the need for shinobi when any average Joe can wield a rasengan, which isn’t truly answered by the end of the film. (It’s important to note that BORUTO: NARUTO NEXT GENERATIONS takes place before the events of the BORUTO movie, and there’s a chance things will play out differently in the series.)

The opening is a little light on action, but the tease of Boruto’s eye technique (which looks like a combination of the Byakugan and Tenseigan) and the seals on both Boruto and Kawaki suggest that the world and characters will develop in exciting ways, a welcome holdover from NARUTO and SHIPPUDEN.

To find out how the series goes from this to the scene described above, you can watch BORUTO: NARUTO NEXT GENERATIONS on Hulu and Crunchyroll.

READ: Not interested in BORUTO? Check out our list of five promising anime you should check out this spring!

All images used in this article were screenshotted from Hulu.