In our interview, W. Maxwell Prince and John Amor guide us through the never-ending halls, oceans, farms, and mental trapeze acts of their incredible ONE WEEK IN THE LIBRARY.

ComicsVerse: I can appreciate the comparison of ONE WEEK IN THE LIBRARY (OWITL) to SANDMAN, FABLES and UNWRITTEN. But there’s something very [Scott] McCloudian about your storytelling. It is very structurally aware of itself. What inspired and decided how you formatted the graphic novel, with respect to chapter division, panel layout, etc.?

W. Maxwell Prince: I think probably all comics, whether consciously or not, owe something to Mr. McCloud’s work. I can say that my own considerations of what’s going on in the “gutter” between panels tend to border on the pious with respect to books like UNDERSTANDING COMICS and Matt Madden’s 99 WAYS TO TELL A STORY—there’s so much going on in a single page of comics, and having some idea of the raw mechanics of sequential storytelling makes it a little easier (though not much) to try to make something.

READ: Need an overview of the legendary SANDMAN? We’ve got you covered.

Re the structure of OWITL, we made Thursday first and then realized that maybe we needed to tell Fri–Wed. From there it was a sort of “what would be simultaneously challenging and in service to The Librarian’s story?” kind of logic that led to things like infographics and prose and silent chapters. The final structure is a bit of a lucky miracle. 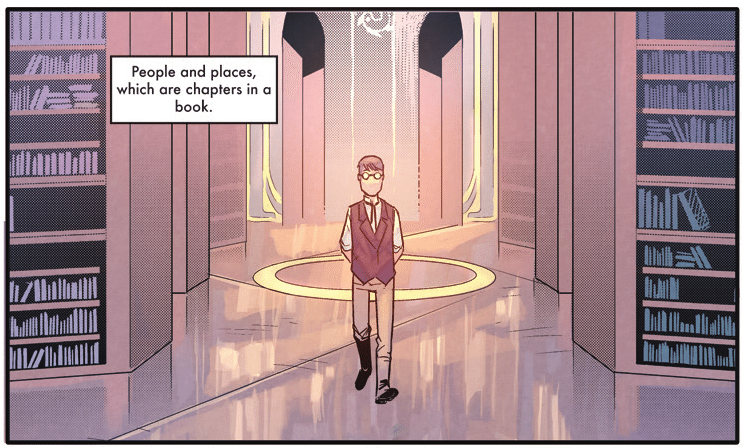 John Amor: As far as Panel Layout goes, it was a matter of deciding what panel structure worked best with specific story beats. In Wednesday, there’s a montage of various interpretations of the word “Wednesday,” so I felt having identically sized panels worked best for that delivery. Tuesday has the Librarian entering the mundane world, so using a 6-panel grid for the majority of that chapter lent very nicely to the plainness of the setting. Each chapter called for its own approach, for sure.

CV: When you sat down to write OWITL, how did you do it? Did you unpack it as a concept—to explore themes and stories—or did you begin from Allen, the main character, who is the main inhabitant, victim and caretaker of The Library? 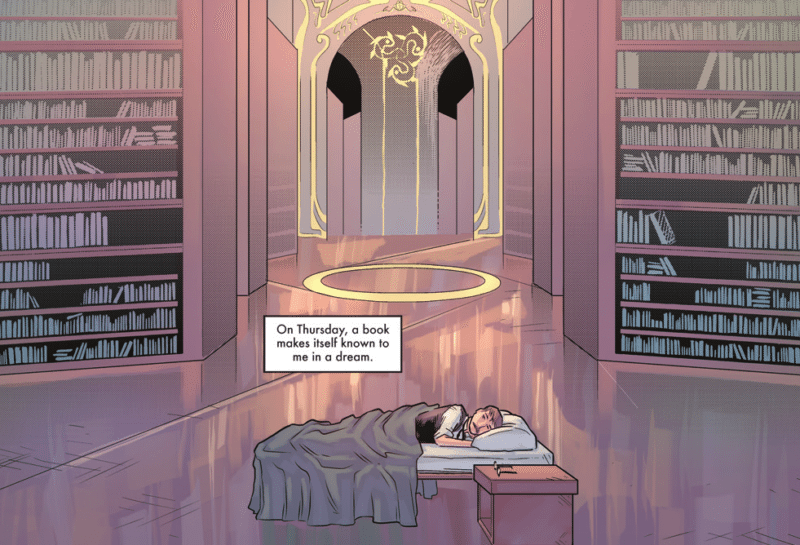 WMP: I started with wanting to do an homage to Borges. Then the first line kind of crept into my head on the subway: “On Thursday, a book makes itself known to me in a dream.” I asked John if he wanted to make Thursday as a sort of cool-down exercise on the heels of our graphic novel JUDAS: THE LAST DAYS (IDW). He did, and when we finished that we realized a full project had presented itself to us. Piecing the rest of the thing together was like a spiritually exhausting form of puzzlery.

CV: There are hints to other classic literature (from what I can discern, Moby Dick makes a cameo on Friday in The Library), but you primarily write OWITL around children’s stories. Considering that truth, perception and deeply complex emotions are some of the novel’s motifs, why is that?

WMP: Well, I’d start by pointing out that there’s maybe an even balance of “adult” and “children’s” lit in the book, but some references are more deeply coded than others. (You can find nods to Borges, George Saunders, Cervantes, The Crucifixion, etc.—all stuff that’s concerned with truth and perception.) But children’s stories are really powerful, maybe more so than they’re typically given credit for. Someone once described them to me as “heavy stones lightly thrown,” which I think is right. 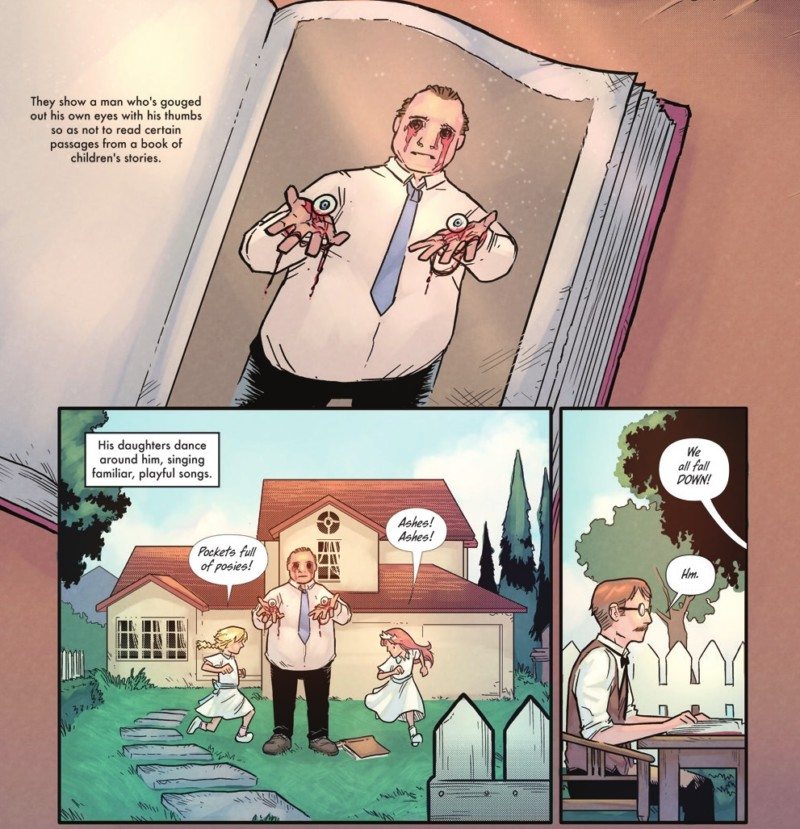 JA: The cameos—a mix of Will and my own ideas to include—largely serve to simplify. The idea of a living, breathing library can hardly be done justice (I feel) unless the books are actively vying for your attention, to the extent that their contents often run amuck. So the question then becomes: How can I represent that visually without the help of any words, given that they are cameos off to the side of any given panel? I felt using the most iconic characters was the most effective way to go. That isn’t to say they are simple characters though.

CV: There were so many layers to Saturday in the Library. To paraphrase Allen, it was pretty grim. What inspired Marigold’s story?

CV: Sunday in The Library is particularly interesting, to me at least. The audience is given a dissection of and a logistical look at The Library. I wouldn’t describe infographics as being distinctly part of the comic book realm or of the world of classic literature. Why include this chapter and why infographics?

WMP: I make infographics for a living (popchartlab.com, for those interested), so I spend the better part of my days thinking about how information can be placed into charts. And Sunday is I think universally regarded as the drabbest of days, so charts seemed just about the most appropriate thing.

READ: Our review of W. Maxwell Prince’s THE ELECTRIC SUBLIME #1

CV: On Wednesday in The Library, is the book that becomes the bridge between The Library and the reality of the OWITL’s creative team significant beyond being a plot device?

WMP: It’s significant in that it’s a book in the Library, which houses all books, which are just reflections of each other. (How’s that for obfuscation?)

JA: I like to think Allen didn’t necessarily find his way into our reality per se but instead found a story that served to explain what was happening around him. Will doing a Grant Morrison was fun and challenging to pull off, but it’s important not to forget that Allen brought himself there—he wasn’t summoned or anything. Semantics aside, the idea that Will is a story that Allen is telling himself is fascinating to me.

CV: John, your art is incredible—from the full page spreads, to your use of color, to the level of detail in panels. Which chapter was your favorite to translate into art? Which, if any, was the most difficult?

JA: Thank you; though as much as I’d like to take the credit, the amazing color work was all thanks to my good friend Kathryn Layno. I really enjoyed Monday, which was the silent chapter. Will cooked something up that allowed me to play in a Charlotte’s Web meets Babe meets Ugly Duckling sandbox, and it was a blast. However I’d have to say that even though Tuesday was more difficult to pull off, it also ended up being my favorite in the book. The challenge of adhering to a grid layout, not having any colors to fall back on, and not using any hatch lines to refine the art almost got the better of me but it worked out in the end. I’m very proud of Tuesday.

CV: You have worked together as a creative team on JUDAS. How did you two meet and decide to collaborate? How different were JUDAS’ and OWITL’s creative processes? 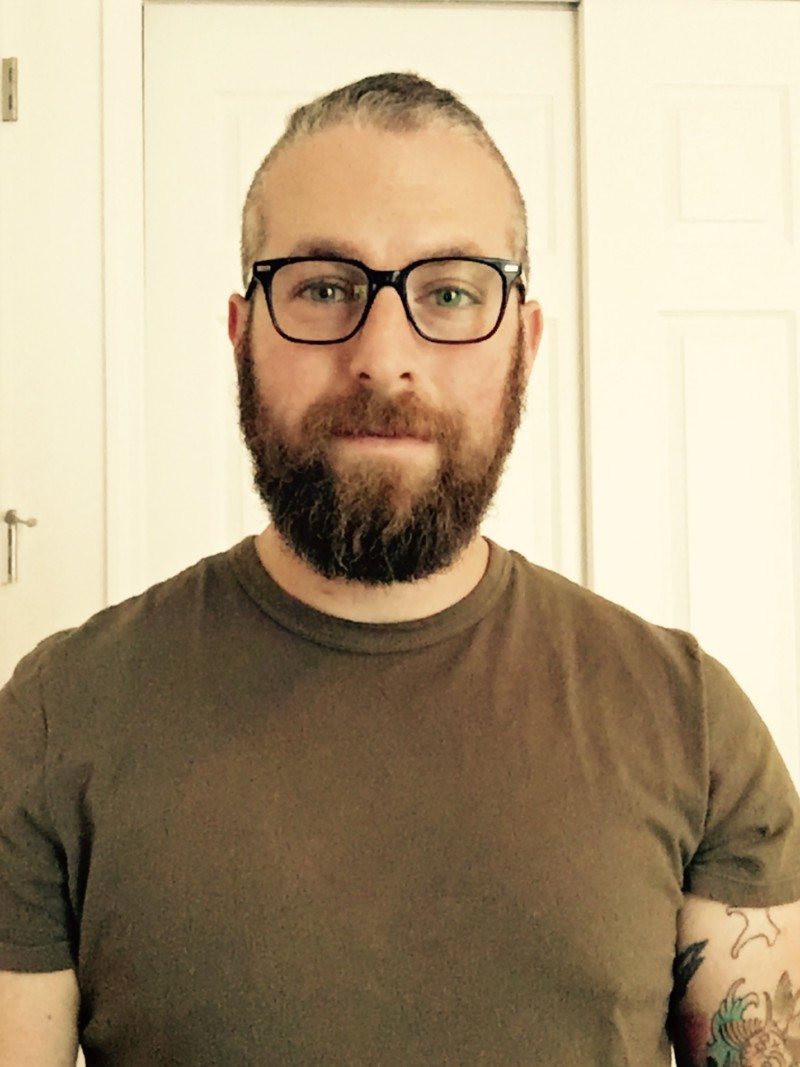 WMP: We met on a now defunct site that connected aspiring creators of all stripes. It’s crazy to think that such a fruitful relationship was born of such mundane beginnings. 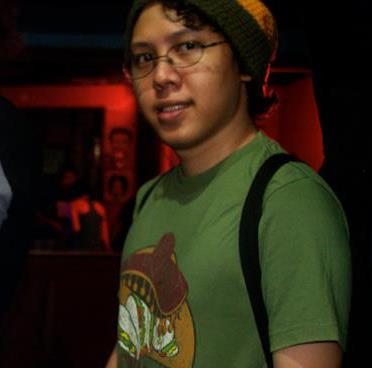 JA: OWITL felt like a briefer project for sure, having about fifty fewer pages—but whereas JUDAS had a more straightforward delivery, OWITL demanded a lot more experimentation from me. Things got way more technical in OWITL in order for me to best serve the visual identity of the book.

CV: OWITL is described as experimental due to both its story and structure. Do you think comics are inherently experimental, with respect to how the medium tells stories?

WMP: My guess is that all art is inherently experimental, insofar as trying to make an idea manifest is always an “experiment”—with all the attendant possibilities for explosions, failures, and mishaps.

JA: Some more than others, but that’s not a bad thing by any means. I still love superhero comics and other such books that come out month to month, but while the art in those is amazing, the end goal is to deliver a story that keeps that property relevant, not to do weird trippy stuff with the panels—so they’ve developed a streamlined and very effective means of crafting a superhero comic. Some of my more recent experimental favorites are things like Brandon Graham’s KING CITY and anything by Jason over at Fantagraphics.

CV: If you could each pick a book or a comic book universe to be trapped in, for all its flaws and wonders, which would you pick?

WMP: I wouldn’t mind walking around in a George Saunders story. (Sometimes I think I already am). For comics, I have three answers: SANDMAN, SANDMAN, and SANDMAN.

JA: If it were a book, I’d pick John Scalzi’s OLD MAN’S WAS UNIVERSE, for no intelligent reason other than it’s a recent obsession of mine, and the world building is just outstanding. But my very quick heartbeat answer would be Riverdale. I grew up reading the Archie books, so I wouldn’t mind being stuck there on bit.

Pick up ONE WEEK IN THE LIBRARY at your local comic book store and find W. Maxwell Prince and John Amor online!