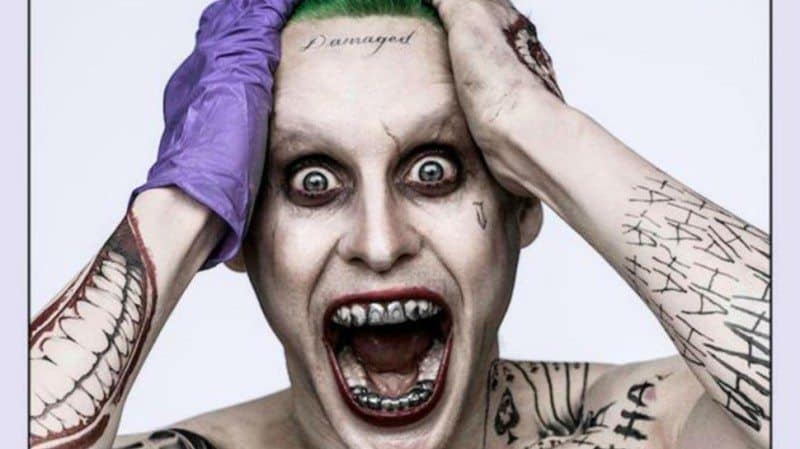 Since its reveal to the public, Jared Leto’s Joker has been a divisive topic among DC fans. In fact, every entry in the DCEU has fans debating on whether it’s even any good. But one thing that most fans seem to agree on is that Jared Leto’s Joker kind of, well, sucked. He’s a very talented, Oscar-winning actor who has played a diverse group of compelling characters. So where did everything go wrong? This question has no definite answer, as it was the result of many different things.

When Warner Bros. was faced with the task of bringing back the Joker, they had a gigantic pair of clown shoes to fill after Heath Ledger’s breathtaking performance in THE DARK KNIGHT. If they went with a carbon-copy of Ledger’s Joker, the film would not have survived Comic-Con. Rather than trying to live up to an unreachable standard, the best course of action is to take the character in a different direction. Warner Bros. did just that and cast the more-than-capable Jared Leto to don the purple suit. Though the creative team angered some fans, it must be noted that the odds were against them from the start.

We all remember the day we first saw the release photo for the new Joker. Whether we remember it fondly or have repressed those memories altogether varies, but we all remember Leto’s introduction in some form. This incarnation of the character and his debut photo have a lot going on, so let’s start with the good:

Some ideas they toyed with are interesting such as the smile on his hand or the group of “HaHaHa’s” on his shoulder that is straight out of BATMAN: THE KILLING JOKE. The tattooed look is fun, but the designers went a bit too far with it. The infamous “damaged” on his forehead, the J under his eye, and the grill are prime examples. While they tried to cover their tracks by explaining it in canon, the grill is a bit much. Without it, he would have been alright.

READ: The Killingest Joke: Joker in BATMAN DEATH OF THE FAMILY

They took a lot of creative liberties (as they should) but their biggest mistake was messing with the Joker’s smile. The wardrobe choices are just as overdone as the grill. The reptile skin jacket makes him look like Marilyn Manson having a Ziggy Stardust phase. There is just too much going on, which is a reoccurring theme with this iteration of the Joker.

The Editing and Studio Intervention

Critics agree that the editing is one of the biggest problems in SUICIDE SQUAD. The film is edited to such an extent that the Joker’s scenes aren’t even necessary to the plot. He is reduced to a glorified cameo to make room for fan-favorite Harley Quinn. The only scenes where the Joker is relevant to the plot are Harley’s origin in ACE Chemicals and the tacked on escape at the end.

The Joker’s other appearances are simply filler that was put in so the studio could say that the Joker is in the film. All of the Joker’s scenes are taken out of a much larger context that the audience never gets to see. This makes each of his appearances seem to begin and end out of nowhere.

Leto has made his feelings about the film’s editing known to the public. He has bitterly stated that the majority of the content he filmed was cut from the movie. This is especially bizarre, as the film’s advertising department used the Joker as one of the movie’s main selling points. After a cartoonish amount of hype over the new Joker, he only had roughly 15 minutes of screen-time. The Joker was reduced to an accessory to sell movie tickets and merchandise instead of a character. The biggest fault here was rushing to put the Joker into the film without taking the time to do it right.

Though a victim of circumstance, Leto is no innocent man. His acting choices were over-the-top, to say the least, and he came across as a guy who’s trying way too hard. The laugh is contagious, in that the laugh is laughably bad. While you can see what he was going for, he still sounds like an old man anticipating a sneeze. Another example is the weird growl he does when he talks to a tied-up captive. In an attempt to be menacing, Leto took it a step too far and he ended up being confusingly random.

Though you can’t go too crazy when it comes to the Joker, Leto found a way to do it. Mark Hamill gives a less cartoonish portrayal, and he is a cartoon.

It is no secret that the SUICIDE SQUAD script went through multiple rewrites. Many of which were due to the backlash that BATMAN V. SUPERMAN: DAWN OF JUSTICE faced for being too serious. This meant that the script was passed between multiple writers over a short period of time, and it shows in the film’s wavering focus.

The Joker was written as a series of Joker cliches rather than original content. He was given lines that are supposed to sound deep more than actually being deep: “Would you die for me? No, that’s too easy. Would you live for me?” While this sounds like a Joker line, it also sounds like that emo high schooler in the corner listening to 21 Pilots. The biggest problem here is that they put more focus on making him sound like the Joker than they did on the Joker himself. It should be recognized that Leto isn’t the only person to blame. Through no fault of his own, Jared Leto’s Joker has barely any characterization.

How They Can Fix It

Though the newest Joker is shaky, he’s what we’ve got to work with. Not to say that he is beyond redemption, quite the contrary. This new Joker has some great ideas, it just doesn’t know what to do with them or how to go about doing them. We still have not seen enough to make a complete judgment (says the guy who’s been judging him for an entire page). There is still a lot of potential for greatness here.

This studio’s faults can be used to the Joker’s advantage. Seeing as Leto’s Joker had a severe lack of development, the character is still a blank slate. With more development and screen-time, Leto can still succeed. As they keep hinting that there’s a Jason Todd/Red Hood storyline in the future. The first live-action adaption of the iconic A DEATH IN THE FAMILY could give Leto the shot he needs to turn this all around. Leto still has a fighting chance! With a few explosives, the right execution, a bit of hope, and a crowbar, this Joker can be chilling in ways that no one has ever seen before.  Or they could just follow suit with the New 52 by removing his face and conveniently re-casting him…