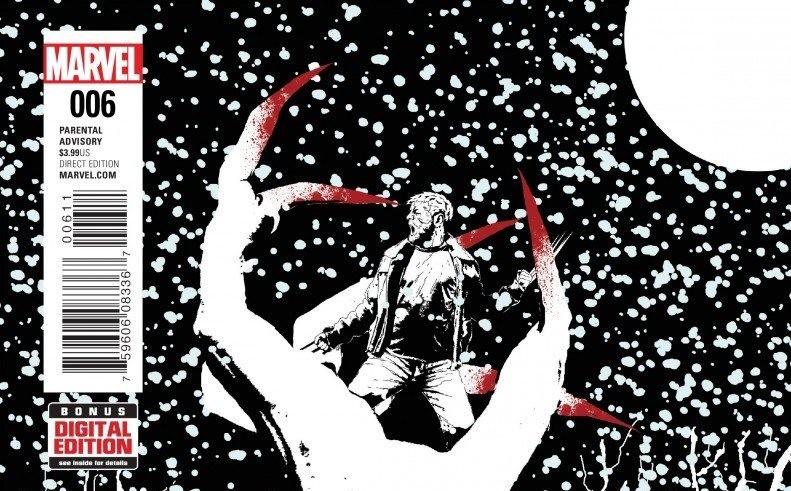 The latest issue of OLD MAN LOGAN finds every member of the creative team at the top of their game, proving they’re the best they are at what they do. It’s action packed, drawn beautifully, and filled with awesome moments both small and large.

Miss out on the last issue of OLD MAN LOGAN? Read our review here!

This issue finds Logan living a now peaceful life in the small, arctic town of Killhorn Falls watching over the girl who would one day grow into his wife. But, as it usually goes with Logan, trouble finds its way into town, throwing its inhabitants into panic. The murderous and robotic Reavers strike, killing and burning everything in their path. From there, it’s up to Logan to save the town. 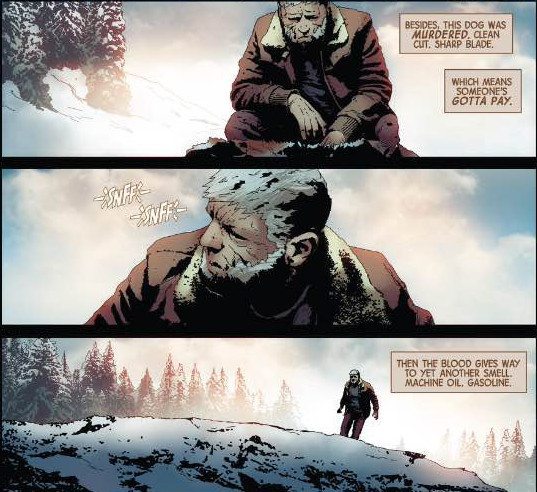 It seems like a simple and classic concept native to a Wolverine book: Logan finally finds some peace, some people he cares about, and then his past catches up and ruins it. What sets it above the rest is the emotional pull Lemire brings to the story. Logan feels responsible for this young girl and only wants her to live a safe and happy life. As a matter of fact, he seems to feel this way for the entire town. He commends them for the hard lives they lead and, when he senses trouble, doesn’t hesitate for a split second to take it on. Perhaps it is the fatherly persona that Logan has that makes this book work so well. He’s an old and tired soul, but keeps on fighting the good fight. That, in essence, is what makes a hero great to a lot of people.

Need some more X-MEN in your life? Listen to our podcast on the AGE OF APOCALYPSE!

From the awesomely gruesome and creative villains like one with half a tank for a body, to the way Logan shepherds a group of school kids to safety, the issue never lets up. It moves at a neck-breaking pace to bring the most action-packed issue of the series yet, and still leaves the door open for the story to hit new levels of awesome. There are tons of action scenes where Logan’s brutality, and even his enemy’s, are showcased thanks to some amazing artwork. The small, character-driven moments are sweet and it’s almost heartbreaking to see Old Man Logan finally find a place he cares so much about. Lemire has definitely found his stride with this book, as it’s best when Logan only wants to do something good but is constantly knocked down by the world around him. 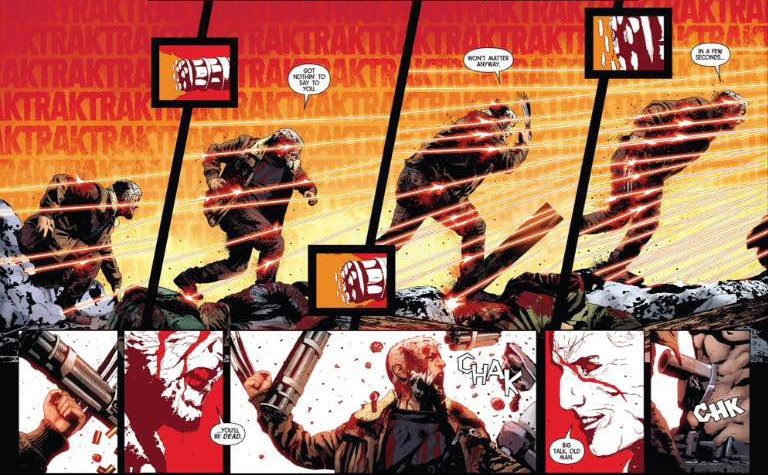 While Lemire tells the story well, it is Andrea Sorrentino’s art that cranks the dial up to 11. The landscapes are grim and barren, and the characters look great, but it’s the action sequences and way he uses sounds and objects that make this book go from pretty cool to utterly kick-ass. Fight sequences are interrupted by Logan’s bloody silhouette against an all black panel with his screams of agony stretched out behind him. The signature SNIKT is broadcast behind a hanging, bloody fist. Such creative choices cause the pain and brutality to reach a new height without being overly bloody or gory. It’s amazing that, after several issues, this team is finding new ways to show some of the ordinary things that Logan often does, like popping his claws or screaming out in pain. Credit is very much due to the colorist Marcelo Maiolo as well. The book has never looked better and the contrasting red/orange/black color scheme makes it hard to move on to the next panel.

This series has really turned into something special. By taking Old Man Logan and making readers feel sympathetic while still driving the story forward, the creative team has found a way to make a book about Wolverine feel like Old Man Logan is the freshest character in the Marvel arsenal. It should be the standard to which all future teams look to when telling a story involving a character only slightly used. While most X-MEN books tend to lean toward the team-heavy stories with themes of family and prejudice, Old Man Logan feels like the GRAN TORINO of comics. It’s all about an Old Man trying to do one last good thing with his life, no matter the cost. Thankfully for us, Lemire, Sorrentino, and company will be around to tell it.