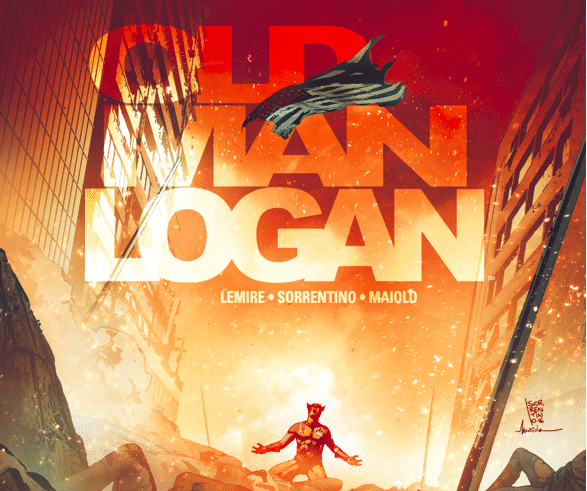 The latest issue of OLD MAN LOGAN takes a step back from the series’ usual fight scenes and gore and spends a lot of time adding some depth and sympathy for the titular character. Thanks to some great character moments and some stellar artwork, it’s a pretty solid entry into an extremely well-crafted series.

READ: Miss out on the last issue? Check out our review of OLD MAN LOGAN #7 to freshen up!

Logan and Jean have a therapy session of sorts in this issue. After sensing his discomfort late at night, Jean takes Logan to visit all the places from his past where the villain uprising took place. Slowly, and as readers are treated to glimpses of the great downfall of heroes, Logan begins to see that this world is safe. As he’s reunited with old friends, in the end, Logan finally feels at peace in this new timeline. 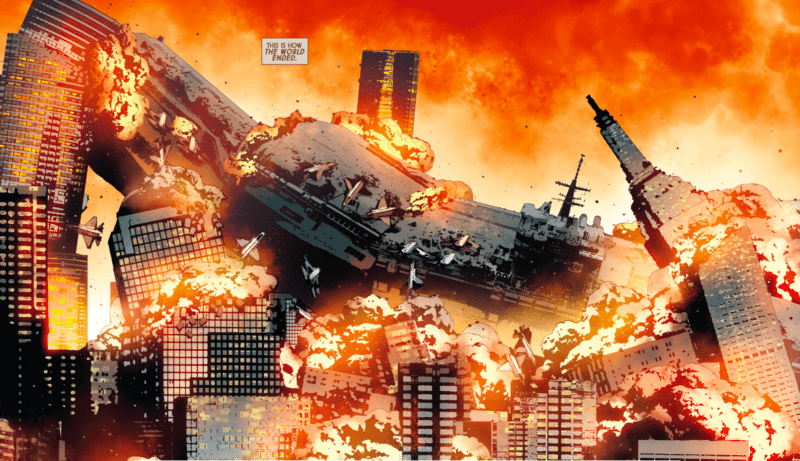 Lemire decides to center on the two characters at the heart of Logan’s story in this issue. Logan is battered and broken, and Jean is young and hopeful, a combo that carries the emotional beats of this story terrifically. Readers know of their tortured past, but seeing Jean care for and help Logan in his twilight years is possibly the sweetest thing in the Marvel canon. She’s not helping him to the bathroom, by any means, but by giving him peace of mind, she’s giving him something he didn’t think he could ever have.

There are also some wonderful and disastrous glimpses into Logan’s altered past in this comic. We see the fall of heroes from several different times and vantage points. It is something that is often glimpsed at in this book and may feel slightly repetitive to some. However, seeing them through Logan’s eyes and at the locations in which they occurred is something new and extremely intriguing.

It is odd to think there could be an extremely heart-warming moment in a book as savage and bloody as OLD MAN LOGAN, but there is. Logan and his friends share a drink that’s reminiscent of the hobbits’ final toast in RETURN OF THE KING. To some readers, it may even draw a tear. A lot of fans deem Logan one of the greatest characters of all time, and seeing him among his rare friends enjoying a beer is well-deserved. 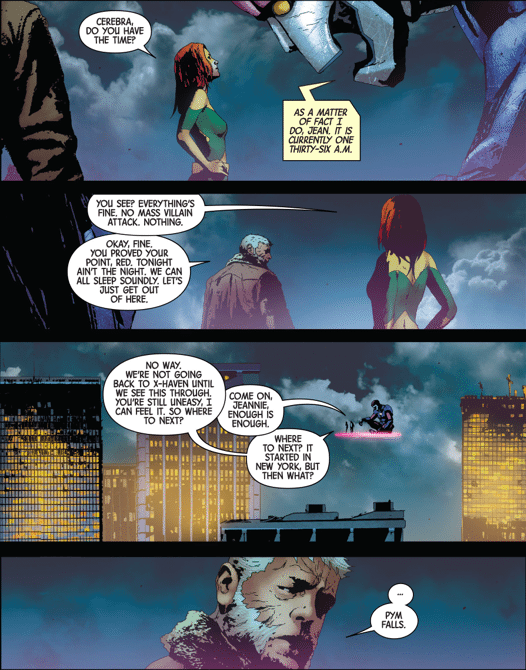 Sorrentino’s work in this issue continues to blow away any other book on the shelves. While there may not be any life-changing landscapes drawn or panels that make one’s jaw drop, it continues to outdo itself around every corner. The characters are dark and grim when needed, and by the time the issue ends, they’re light and smiling, something that we’ve yet to see in this series. It was a joy to see Sorrentino draw a smaller, more intimate setting, and hopefully, he gets the chance to do so again.

This issue of OLD MAN LOGAN may feel slow to some, but it is precisely what the series needed. It grounded Logan once again in the current X-Men situation, developed his relationship with Jean, and put a smile on this reviewer’s face unlike any other comic. This series continues to be brilliant, and Lemire and Sorrentino prove again why they are masters of the comic form.