It didn’t seem possible, but thanks to the best artwork in a Wolverine comic in years and Jeff Lemire’s masterful storytelling skills, OLD MAN LOGAN #7 is the best issue in the series and one of the finest arc-finales in recent memory.

READ: Our review of the last issue of OLD MAN LOGAN and freshen up!

The issue picks up where the last let off with Logan facing Lady Deathstrike and her reavers, trying to protect the small town of Killhorn Falls. He goes on a rampage in order to save the citizens, and in doing so, questions himself and whether or not he caused the death and destruction. While he may beat the bad guy in the end, the battle changes Logan forever as he sets off to track down anyone who might want him dead. 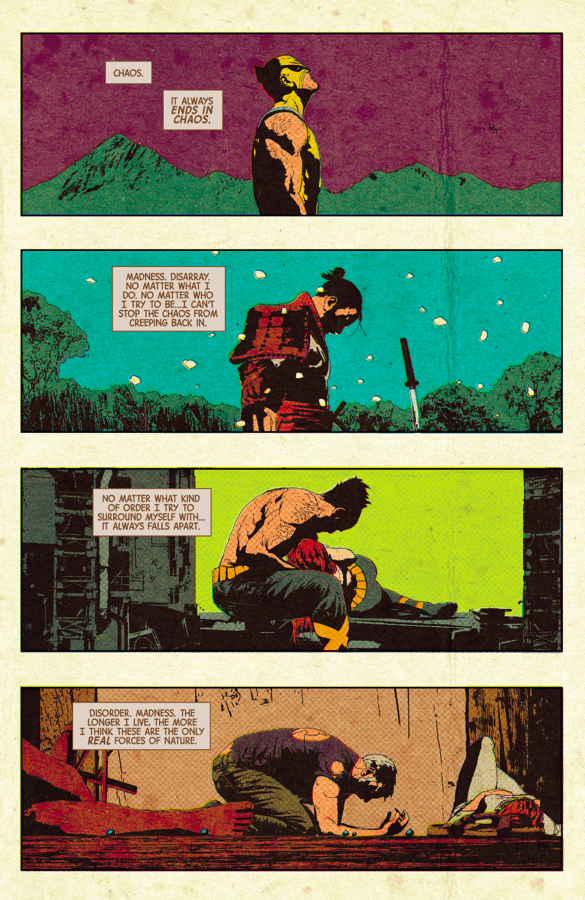 What writer Jeff Lemire is able to do by making Logan confront the truth of his efforts (that it is he who causes the death and destruction around him) is nothing short of amazing. This is, perhaps, the best piece of Wolverine storytelling since Jason Aaron’s early days of WOLVERINE & THE X-MEN. Logan is not Wolverine, however. He’s an old man being chased by his past, jeopardizing all those around him. He’s a tragic figure, forced into loneliness by the end of the issue.

As the main focus of this book, it allows readers to get into his headspace without dedicating time to other X-Men or miscellaneous allies. In the present time, Logan is frantic and desperate to save these people and kill the reavers. In his head, and looking back on his life, he is almost like a man on the verge of a breakdown, weary from years of fighting and loss. It’s a refreshing change of pace for a classic character, and Lemire excels in breaking him down and taking him in a new direction. Watching Logan struggle to protect ordinary citizens is a great reminder that all actions have consequences, and not all heroes concern themselves with saving the entire planet. To some, being a hero means helping those who deserve it.

LISTEN: to our podcast discussing the X-classic, AGE OF APOCALYPSE!

In a lot of ways, Old Logan is a great foil to Captain America, Marvel’s other resident old-timer. Both are (or were) men out of time, forced to adjust to a new world. However, while Steve Rogers became a force for good (or so we thought) because the world allowed him to be, Logan became the only thing this world lets him be: alone. It will be interesting to see if this Clint Eastwood-esque Logan ever finds happiness again. 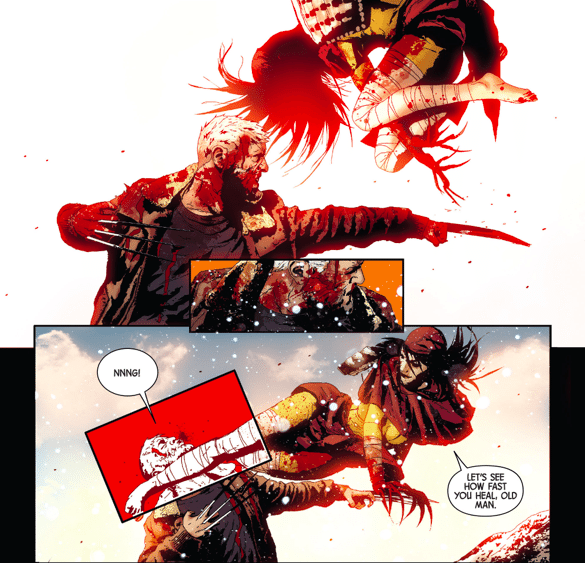 Artist Andrea Sorrentino and colorist Marcelo Maiolo not only outdo themselves, but every other creative duo in the industry. Their artwork is nothing short of cinematic in the way it flows, and its beauty through color and style is on par with any modern artist in any medium. Their work has a fluidity that makes it hard to keep your jaw off the floor. They use several series of quick and small panels to rapidly move Logan through an encounter before a giant splash feels like a slow-motion shot of death, showing Logan slicing his enemy into pieces. The symbolic spreads of a Wolverine suit filled with skulls and the use of repetition in the first two pages show that these artists are simply on another level.

This series is shaping up to be a legendary run on Wolverine. OLD MAN LOGAN is the best X-Men book that Marvel is currently publishing, and maybe even one of the best book on the stands. By understanding the character’s place in the new world and breaking him down, rather than having him save the day in every other issue, Lemire, Sorrentino & co. have crafted a book that makes all others seem unworthy.