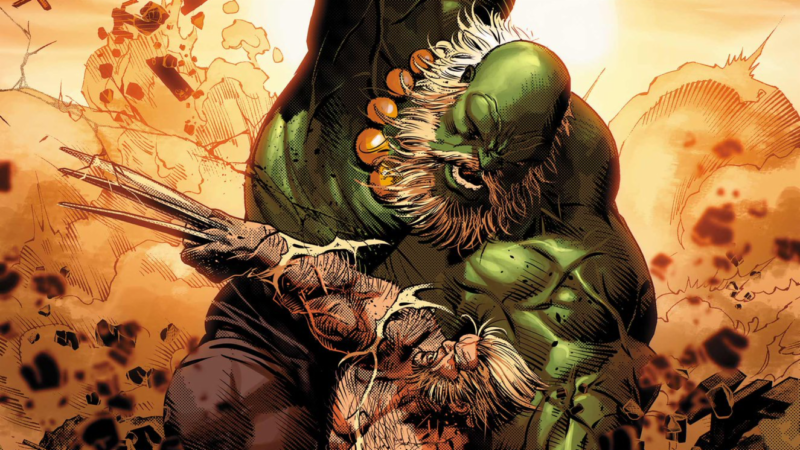 OLD MAN LOGAN #25 gives us a new creative team of Ed Brisson, Mike Deodato, and Frank Martin. After twenty-four issues of setup from Jeff Lemire, Brisson has a tough act to follow as he writes about one of Marvel’s currently most popular characters. This issue gives us a slightly new twist dealing with the Hulk family from the Wastelands. While the plotlines dealing with Old Man Logan’s previous life grew tiresome at times in Lemire’s run, Brisson has the opportunity to really add something fresh to the concept.

This issue begins in a very tranquil setting. An older gentleman is watching over four children, and the group talks about how beautiful everything is. The old man goes on to explain how they’re on the run and must keep moving. He talks about “brothers,” but it isn’t until later in OLD MAN LOGAN #25 that we learn who those brothers are: the Hulk Gang. Logan finds this group of misfits in their human forms in a diner. While Logan is quick to sniff the Hulks out, the brute strength of the clan gives him a challenge. Artist Mike Deodato doesn’t hold back with the gore, and it makes the scenes that much more interesting to peer at. At one point, one of the Hulks dumps a fryer onto Logan, and the resulting smoldering heat from the grease nearly reduces Logan to a “puddle of skin and bone on the ground.”

Eventually, Logan takes out three of the four with his claws, but one — Billy-Bob — escapes. The inner-monologue of Logan in this issue is very reminiscent of Lemire’s writing. We find Logan constantly doubting everything he’s witnessing. How could the Hulks be here? How is this possible? Why now? He then beats himself up after said doubting. He realizes that if he was able to make it to this Earth, obviously, the others can too.

This inner-monologue is one of the strongest aspects of OLD MAN LOGAN # 25. Listening to Logan continuously question himself is an intriguing idea for the character, as the younger version we’re all accustomed to often came off as overly confident. It’s nice seeing such character development and introspection in a character of such old age.

I will admit, though, that while this characterization is appreciated, the overall plot seems a bit too chaotic. Time travel is a delicate concept to take on, as I mentioned in the previous issue’s review. It can get confusing, and being consistent is challenging. Brisson’s choice to bring the Hulks from the Wasteland to the main Earth is questionable. While it could make for good action, I actually want to see Logan move on from the Wastelands. Logan even thinks to himself, “and now I’m stuck living the same, sick dance over and over.” This is exactly what OLD MAN LOGAN #25 feels like. Lemire gave us a sendoff of such emotional power in his final issue; it’s almost annoying seeing the concept revisited all over again so soon.

The artwork is the major highlight of OLD MAN LOGAN #25. The drawings and panel structuring by Mike Deodato are both familiar and fresh. The layouts are similar to what Andrea Sorrentino would do in his issues with OLD MAN LOGAN. Yet, Deodato’s are sharper and much crisper here. His drawing style is more straightforward, so the panels serve as tools to view his art more attentively. This is particularly true in the diner fight scene where Logan first pops his claws. The panels cause the eye to really focus on the drawings, and this makes you linger on the page for a few seconds longer. For good reasons, of course. The coloring of Frank Martin also adds great dynamics to the pages. His shadings add extra dimensions when multiple characters are on a panel, and much of the artwork looks old school with its dotting format.

Overall, OLD MAN LOGAN #25 is a good issue. It’s nice to see a fresh creative team on one of Marvel’s most popular titles, and I’m rooting for them to continue that trend. While I have hesitations with bringing the Hulks from the Wastelands to the main Earth, the chance for riveting action is definitely present. Maestro being revealed at the end of this issue is also something to be excited about. This issue is a decent jumping on point if you haven’t been reading Lemire’s run. Definitely give this issue a read. Even if you’re just a bit familiar with the character of Old Man Logan, you’re going to enjoy the ride that will ensue.