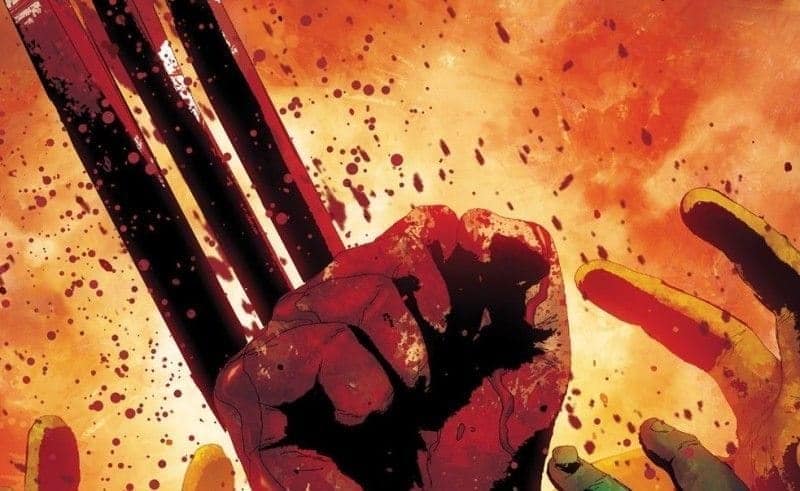 Will Logan survive a battle beyond the Shield? Will he defeat the countless hordes of Venoms and Zombies attacking him? Will he ever get back to his home domain? And, the most important question: who still cares?

After attacking Grand Marshall Rhodes, member of the Thor corps in Technopolis, Logan ended up being punished by being transferred to the Deadlands, where he faces countless hordes of deadly creatures such as Venoms and Zombies. In this issue, the reader sees him struggling to survive in a fight that, seemingly, never ends, and he starts regretting to ever have left his home. However, he encounters another hero punished by Doom, and they eventually try to come up with an idea to escape…

Reading OLD MAN LOGAN #4, I felt an extreme sense of Deja-Vu because of the issue constantly reminding me of the previous one. And not in a good way. This issue follows the exact same pattern as the last one did: a pointless fight in the beginning, a random encounter with another person from Battleworld, and Logan’s arrival in yet another different domain as the cliffhanger. And I’m so tired of the redundancy of this series. I just couldn’t say that the plot of this book is still any good when it just consists of random fights happening for no particular reason and new worlds the main character ends up in over and over again.

In my last few reviews, I assumed that Bendis didn’t actually want to do anything with the character but just wanted to take him to as many different places on the patchwork planet as possible. In these reviews, I was half joking. But after reading #4, I might actually be right with that statement after all. In the four issues that have come out thus far, Logan, geographically speaking, was put on a journey. Not one that makes a terrible amount of sense; by the end of this issue, She-Hulk throws him from the Deadlands to Manhattan, a distance that, given the size of Battleworld, seems pretty implausible.

But, emotionally speaking, there’s no journey whatsoever. Bendis doesn’t take the character of Wolverine anywhere in this series. Even though there is a lot of characterization in the first half of the issue, where we see Logan regretting the fact that he ever left his home and slowly sliding into mental illness. But, in the end, all we learn about his character is that he feels shitty being beyond the Wall, having to fight the most deadly creatures on the planet. Which the reader could’ve figured out on its own. All the emotions we see from Logan in this book are disbelief and anger. There’s no development.

And what’s with these random encounters with characters like Boom-Boom, or, in this issue (Spoiler!), She-Hulk? They ultimately lead to nothing, because the characters disappear again a few pages after they first showed up. Also, She-Hulk is, in the Old Man Logan reality, the mother of the Hulk clan that murdered Logans family. Shouldn’t that have been brought up in that dialogue? Generally speaking, apart from the first issue, this book barely has any “Old Man Logan” in it. Sure, the main character IS Old Man Logan, but Bendis barely does anything with him. From the first issue on, the whole thing constantly went downhill, and now, or at least I hope so, we have reached rock bottom. All that’s left to hope is that #5 will be Marvels great way to introduce Logan to the 616 characters and integrate him into the Post-Secret-Wars universe.

Not even Sorrentino’s – as always – gorgeous art helps here, because the issue is, granted, fantastic to look at. But that’s just not enough to sell a comic book.

Long story short, OLD MAN LOGAN #4 is even more redundant than #3 and doesn’t add anything to the character; neither does it have an exciting or well thought-out plot. On these 22 pages, barely anything happens, at all, and the series is in danger of becoming a missed opportunity to write a great story about one of Marvel’s coolest characters.

CHECK OUT MORE ARTICLES BY MARIUS!