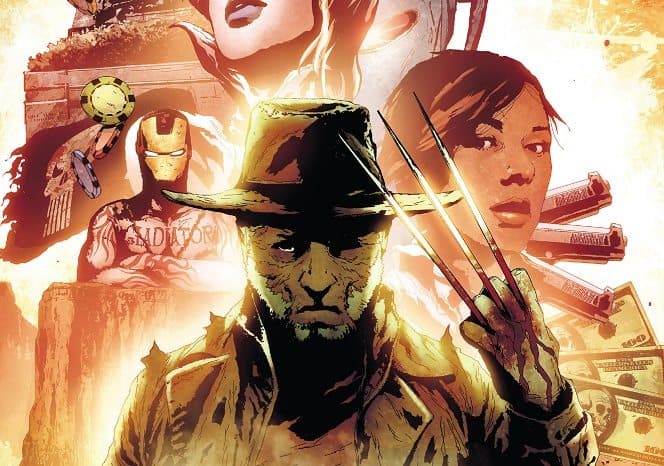 How does the aged Wolverine from the fan-favorite Mark Millar run fit into Battleworld?

The multiverse has been destroyed. All the universes our favorite storylines took place in have collided with each other, destroying each other and killing most of our beloved characters. Now, all that’s left is Battleworld, a huge patchwork planet made up of fragments of all the dead universes, with inhabitants that think they’ve spent their entire life on it, all worshipping their god and monarch, Victor von Doom. Sounds confusing? It is. So I don’t really know what to expect. How does the ancient Wolverine from Mark Millar’s fan-favorite Old Man Logan fit into all of this? Is this new volume more of a sequel to the original story, or a tie-in to Secret Wars that only remotely has anything to do with the world and the story Millar introduced us to?

During a big battle of heroes versus villains which ended with the villains taking over control of the world, Wolverine was tricked into killing all his former friends and teammates and therefore decided to no longer use his claws. 50 years later, in a post-apocalyptic world, a roadtrip with Hawkeye changes his life and he decides to kill the entire Hulk-clan in order to take revenge for his family. He then adopts the youngest child of Bruce Banner and rides away from his former home, wanting to become a superhero again to save what’s left of the seriously messed-up world he lives in.

In this new volume, we see what would be the logical consequence: Logan has left his home, riding through the country, fighting evil and trying to save people. When he finds an Ultron head, he realizes that he will need to solve problems way beyond the borders of his own part of Battleworld…

Let’s start with something that’s really different from the first Old Man Logan arc: the art. Bendis has already worked together with Sorrentino for their Tempus-centered graphic novel, and I really enjoyed his art in that book. But he totally killed it with this issue. He offers beautiful landscapes and a style that, in general, fits the dark and western-esque tone. It’s just totally different from McNiven’s approach, but that’s not necessarily bad.

Interestingly enough, Bendis manages to make this book feel like the direct sequel to the old Millar arc. The characters are all aware that they live on Battleworld and that Doom rules all of them, but still, the first issue really feels like the logical consequence to how Old Man Logan Giant Size ended. We have a Logan who’s strong-willed to make the world a better place and to fight evil, which is exactly where Millar left off. The characterization is spot-on, and the same goes for Emma Frost.

Another thing Bendis manages really well is making the reader feel like this book takes place in the same world as its predecessor. We get to meet characters we already saw in Millar’s run; we get to revisit places like Hammer’s Falls. There are so many gimmicks reminding us of the book we all loved, but still, the book is integrated into Battleworld and leaves us with a cliffhanger that indicates Logan might actually visit other realms in the next few issues. I really think this issue will be the only one really feeling like a sequel to the original story, and the next few issues will more and more explore the concept of Old Man Logan being confronted with the dangers that Battleworld has to offer.

In the end, there’s not much to complain about when it comes to this issue. Not only is it a great opening issue that really makes me want to read more, but Bendis also manages the balancing act between writing a sequel to the original story and a tie-in to Secret Wars, setting up a story that will see Wolverine confront the other realms of Battleworld. He also uses this opportunity to introduce an adult version of a character I wouldn’t have expected to see!