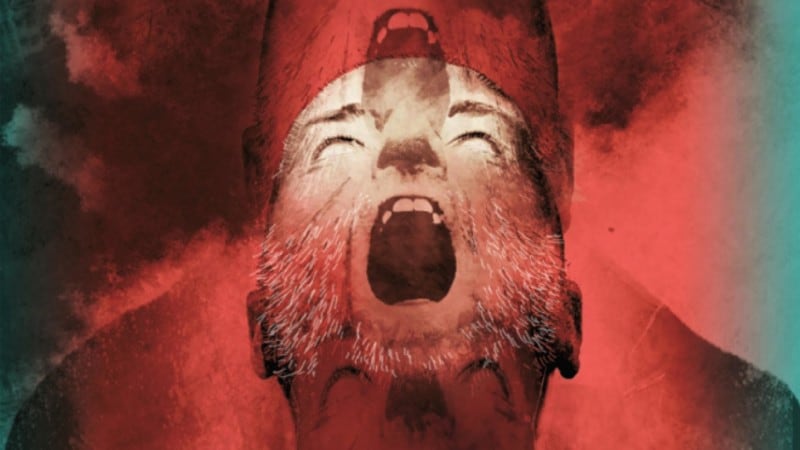 OLD MAN LOGAN #20 is a riveting comic book that takes the best aspects of the series thus far and places them all together. Jeff Lemire has managed to quell Logan’s general distress of being in a new timeline while naturally bringing aspects of The Wastelands back into fruition. While books like X-MEN GOLD and WEAPON X reveal Logan is here to stay, this series itself feels as though it’s approaching a sort of climax. Artists Filipe Andrade and Jordan Boyd return for this issue, and as I said in my previous review, their collaboration with Jeff Lemire has really improved to create page-turning storylines.

READ: Need catching up? Fear not! Here’s our review of OLD MAN LOGAN #19!

Taking place immediately after the previous issue’s ending, OLD MAN LOGAN #20 gets straight to the point. Logan is busting Asmodeus, a former Avengers villain who has the capability of sending individuals backwards in time. This is exciting! Time travel is what caused Old Man Logan to reach this Earth in the first place, so it’s nice to see the topic return. But Asmodeus’ powers are nonexistent without his artifacts. Well, Logan reveals he’s much smarter than he lets on: it turns out while visiting Doctor Strange, Logan was actually searching for these ancient items. He had done his homework, and this inclusion in the plot reminds us that as hotheaded as Logan is, he’s an extremely intelligent individual. Asmodeus teleports the two to a storage facility in New Jersey, where all the necessities for the time traveling technique are located. The spell is cast,  and Logan is sent to his past while his present body remains limp.

I really enjoyed reading OLD MAN LOGAN #20, especially the process of time traveling that is executed. It reminds me so much of X-MEN: DAYS OF FUTURE PAST, where Logan is sent back in time to regain consciousness in his former self. It’s an excellent idea by Lemire, for this method is an established one that’s been used before, making it moderately believable in this fictional universe. Logan’s body remaining in the present timeline also offers up a lot of potential. There’s no telling who will come across Logan’s unconscious body. While this seems like a bold move, it seems very much like Logan to risk everything — his body, the Marvel timeline — to save the life of an individual he feels he has wronged in a previous life.

OLD MAN LOGAN #20 also does an excellent job showcasing Logan’s prowess in planning. At first I totally believed he was simply not thinking through his actions, when in reality he knew everything his plan was going to take. It just shows how cunning this man really is when he visits Doctor Strange with the intent of simply stealing items. He is Wolverine, after all, a man who whose garnered ample skill and craft during his long and enduring life. Sometimes his brash behavior has us as readers forget that, so Lemire’s decision to include these strategies is brilliant. I’m hoping this same intellectual Logan bleeds over in the X-MEN GOLD and WEAPON X titles, both of which feature Logan.

The artwork in this issue is rough but edgy. Filipe Andrade’s scratchy style at first annoyed me a few months back in “Monster War,” but works with Lemire’s writing style much more smoothly in “Gone Real Bad.” A strong reason for this is that most of the scenes in OLD MAN LOGAN #20 are moments where Logan and Asmodeus are simply talking; there aren’t any fight scenes that tend to be somewhat confusing with Andrade’s artistic style. Instead of focusing and somewhat struggling with action, Andrade is able to tend to the surrounding areas where these two characters interact with one another. Furthermore, the colors by Jordan Boyd add a dark tone to everything Andrade draws, giving a bit of a dreary feeling to the scenario depicted. The art represents Logan’s bold decision well in this way.

READ: Here’s a wager on which five mutants will return during the ResurrXion story arc!

OLD MAN LOGAN #20 is a great closer to the “Gone Real Bad” story arc that sets us up for “Past Lives.” Artists Andrea Sorrentino and Marcelo Maiolo will return for this story arc, but it will be their last. While that has me sad, it has me believe something truly epic will occur. With ResurrXion under way, the 616 Wolverine is due to return. Might that happen here? Or will something even deeper happen, affecting Old Man Logan who has truly developed as a character since his return in SECRET WARS, and will no doubt continue to do so in X-MEN GOLD and WEAPON X? Regardless, OLD MAN LOGAN #20 makes the reader curious and intrigued during each page, reminding me personally why this series is so damn good.