OLD MAN LOGAN #19 brings on new artistic talent with the likes of Filipe Andrade and Jordan Boyd. This issue is the beginning of Logan’s attempt to return to the Wastelands, the area of his past he thought he had finally gotten rid of. But the mind-warping effects of a Brood-controlled Jean Grey from the previous three issues have forced Logan to think critically of the Wastelands, allowing his mind to overthink his decision to leave a baby Hulk behind. Through intriguing dialogue and a plethora of guest stars, Jeff Lemire’s OLD MAN LOGAN #19 is a solid issue that does surprisingly well with its shift in artwork.

OLD MAN LOGAN #19 is the beginning of “Gone Real Bad,” a two issue story arc that will most likely lead to Logan’s return to the Wastelands. It begins in The Cellar, a maximum-security super-prison that is hosting a certain prisoner Logan is trying to get a hold of. He tears through guards with the greatest of ease, even having a small brawl with Spider-Man (Miles Morales) in the process. There are two flashback scenes in this issue. The first takes place nine days in the past, where Logan is speaking with Illyana Rasputin in great detail about his attempt to return to the Wastelands. She tries to reason with Logan that he needs to move on from his past. But when that fails, she attempts to convince him this would in fact be too risky. The second flashback scene showcases Logan talking to eight other characters (Doctor Strange, Scarlet Witch, and Doom being amongst them) who all refuse to assist Logan. This is what eventually leads Logan to The Cellar, where he attempts to break out a supervillain with an offer he can’t refuse. 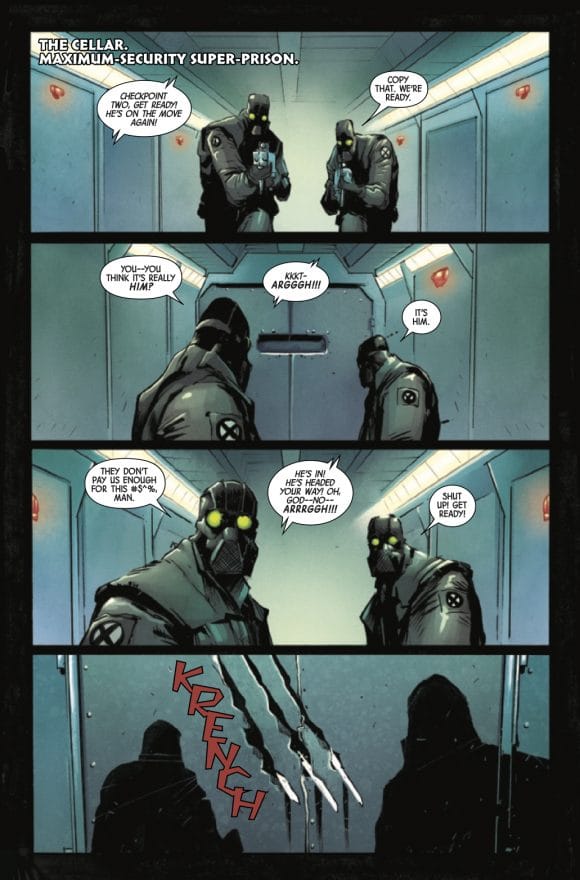 Jeff Lemire’s OLD MAN LOGAN continues to provide stellar storytelling that piques my interest in all the right ways. I really enjoy how Logan approaches so many different magicians and scientists about his conundrum, and the appearance of Spider-Man is just icing on the cake. The dialogue in Logan’s interaction with Miles is particularly great, because their banter is reminiscent of the classic Wolverine’s dialogue with Peter Parker. It’s fun and light and the soft side Logan has for the wall-crawler is very noticeable. I found Lemire’s characterizations so great in this issue, and while the plot is moving in an intriguing direction, it’s the dialogue that carries this comic book. Though, I really am curious where this prison break leads, and I’m even more excited for Logan’s eventual return to the Wastelands. My main frustration is simply that this return has been teased out so long, that this issue is close to feeling like filler. However, it’s entertaining enough, and like I said, the guest appearances are much appreciated as a Marvel fan. 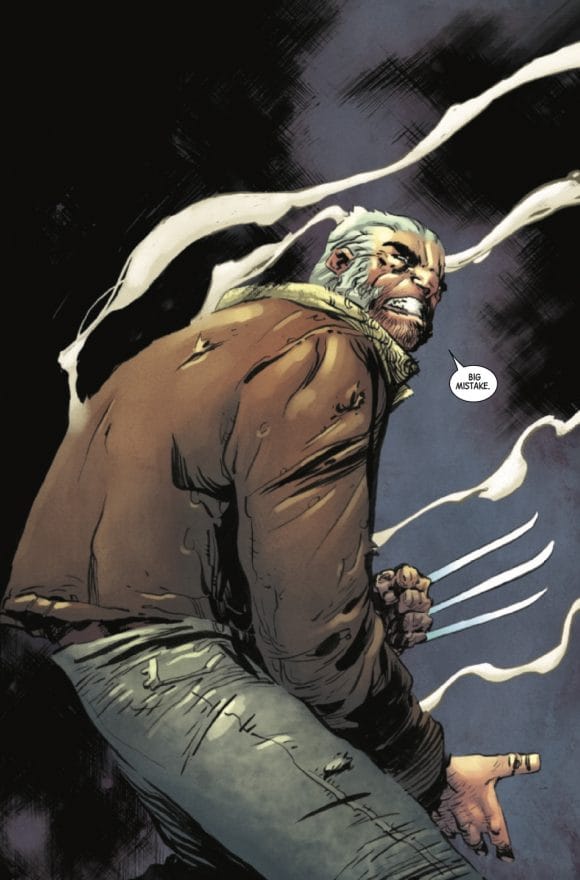 I do really miss the artwork of Andrea Sorrentino and Marcelo Maiolo in this issue. However, Filipe Andrade and Jordan Boyd do produce adequate artwork that fits this dialogue-heavy story well. These two created the art in the “Monster War” story arc back in the fall, where I felt the artwork really wasn’t all that great. However, in this issue, I feel these two are more comfortable with the character of Logan and Lemire’s writing style, and that is shown with the smooth fight scenes (particularly with Spider-Man, who I assume isn’t the easiest to draw). I enjoy Andrade’s depictions of each character Logan visits, and Boyd’s cool colors make the comic very aesthetically pleasing. While I’m still not the biggest fan of this duo’s choppy artistic style, I found myself into it much more than previously.

LISTEN: Need more X-Men? Listen to our podcast on the great women of the X-Men!

Overall, OLD MAN LOGAN #19 is a fine comic. While at times it feels like a filler issue, it’s entertaining and proves to be a good bridge to Logan’s eventual return to the Wastelands. The shift in artwork is much smoother than what occurred five issues ago, and I think shows how strong of a series OLD MAN LOGAN is becoming. I’m genuinely so excited that this series is reaching its twentieth issue, and I really hope even after Lemire’s departure in a few issues that this title continues its strong run. As I’ve said in previous reviews and articles, OLD MAN LOGAN allows for such fascinating adventures and interactions that cannot possibly be accomplished with a traditional 616 Marvel character. That is very prevalent in this particular issue, so if you have enjoyed this aspect of OLD MAN LOGAN, definitely give this one a read.