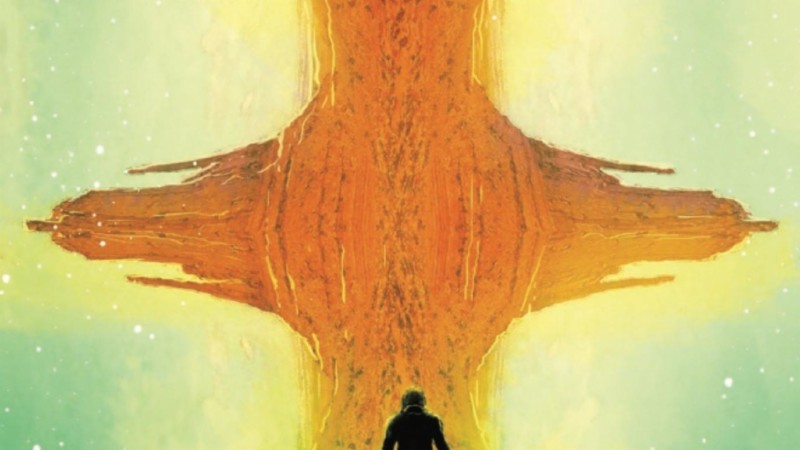 OLD MAN LOGAN #18 concludes yet another exciting storyline from writer Jeff Lemire and the artistic team-up of Andrea Sorrentino and Marcelo Maiolo. After OLD MAN LOGAN #17 proved to be a relatively confusing installment, OLD MAN LOGAN #18 shines light upon all the confusing tidbits in the “Return to The Wastelands” story arc. In addition to crafting a well-rounded story, Lemire brings in an array of Marvel characters that really build upon Logan’s characterization. OLD MAN LOGAN #18 not only keeps the reader on edge with excitement, but with the ending of this issue, it becomes clear that almost anything is possible with this character. 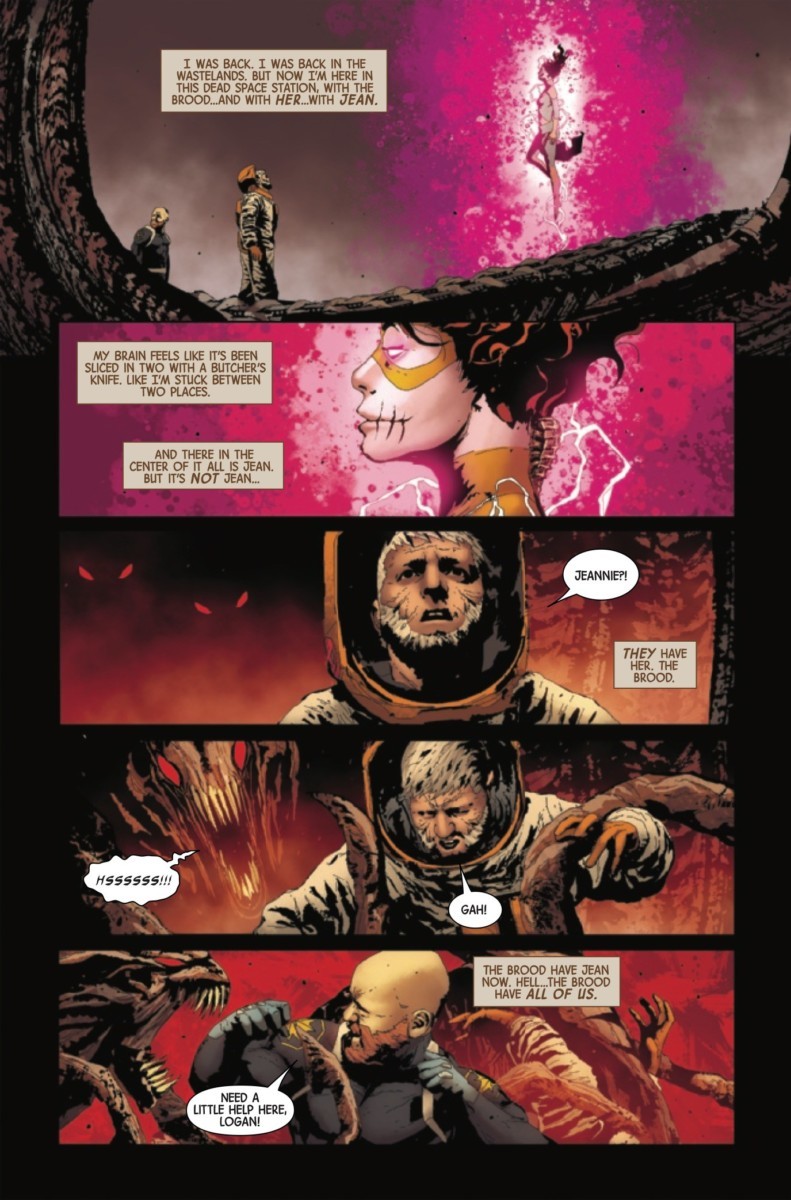 The issue begins with young Jean Grey floating in the air, surrounded by her pink psionic waves. Her face is depicted like that of the monster in Frankenstein, with her mouth sewn shut on one end and her eyes staring blankly ahead into the abyss. She is being controlled by the Brood, who are forcing her to twist and turn Logan’s mind, causing him to see images and people from his original timeline. Honestly, it’s like he’s having a dream right before fully waking up, where the mind jumps around reality and fantasy to produce some of the most bizarre ideas. Before this issue, it wasn’t entirely clear where exactly in the timeline Logan was, but once the twist is revealed, it becomes oh so obvious.

READ: Need a recap on how this story arc started? Here’s our review of OLD MAN LOGAN #16!

It is as if Sorrentino and Maiolo’s artwork is made for this type of plot line. There are various two-page spans that are drawn and colored beautifully, with Logan drifting in and out of his “dream” as his worst nightmares come to life. There is one moment as he’s looking upon the corpses of all his former X-Men teammates, and all he can think is, “and I’m in hell. The worst moment in a life full of bad ones.” All of Logan’s regrets are being ripped from his consciousness by Jean Grey, as if his sins are being exposed by God himself: leaving Bruce Banner’s grandchild in The Wastelands, his family dying, his teammates dying, saving nobody but himself. A life full of sorrow is hard enough, but due to his healing factor, Logan’s lived more than just a few lifetimes. 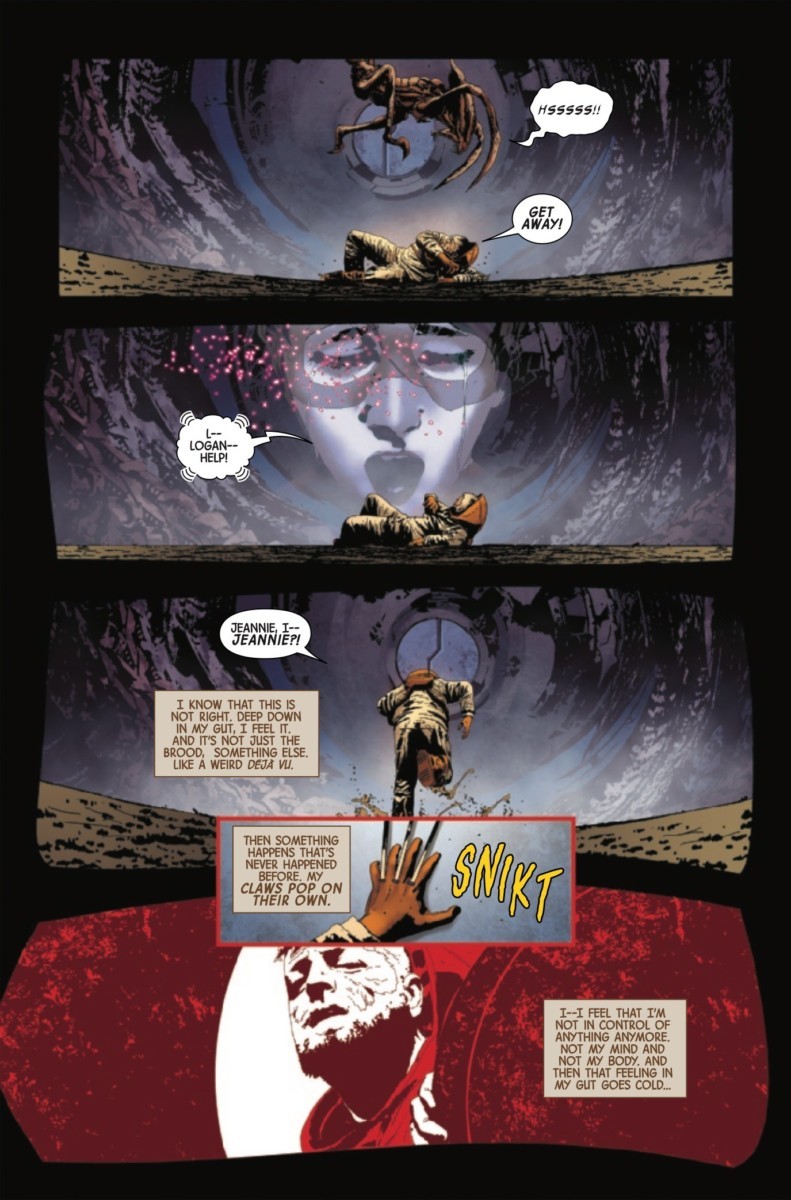 Overall, OLD MAN LOGAN #18 is a fantastic conclusion to the “Return to The Wastelands” storyline. After the disappointing two issues prior to this arc, I was fearful that this series would slip as it approached its twentieth issue. However, I was completely wrong. Lemire is using just the right touch when it comes to utilizing the mainstream Marvel universe. An example in this issue is his use of the young Jean Grey. Logan’s history with the psychic is only hinted at with his exasperated surprise of seeing her mind controlled and his subtle references to her as “Jeanie.” Lemire utilizes this opportunity by simply using Jean’s powers as a way for Logan to look deeply into his mind and pull out his biggest regrets. There is no wasted time establishing relationships, and I think that serves this plot well.

READ: New to OLD MAN LOGAN? Here’s why you should be reading it!

As always, the Sorrentino and Maiolo’s artwork is captivating. Sorrentino’s interpretation of Jean Grey under Brood mind control is very intriguing to look at, and Maiolo’s coloring of her psionic energy really pops when it’s contrasted against the darker tones of the background space shuttle. I’ve mentioned this in previous reviews, but it’s worth saying again: these two artists flourish when they have entire landscapes to work with, so whenever flashes of The Wastelands are shown, the artwork is breathtaking. There are times where Logan is being forced to imagine Bruce Banner’s grandchild as a hulking adult set on ruling The Wastelands, and this dystopia reminds you of the hell Old Man Logan has come from. 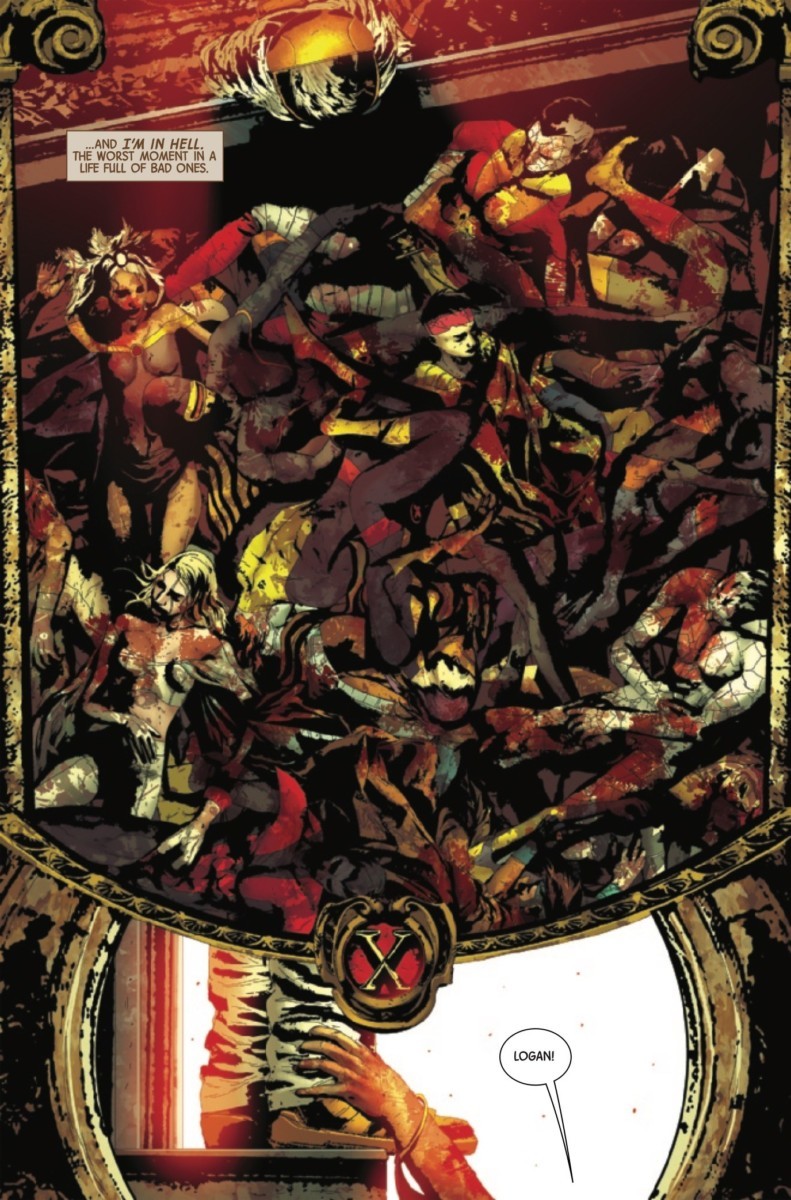 If you were weary a few issues back during the “Monster War” story arc where Sorrentino and Maiolo took a break, don’t fret. It seems like this artistic team is here to stay, and the next story has me jittering with excitement. At the end of this issue, it is revealed Logan has the intention of truly addressing his past life in The Wastelands, and the idea for such a concept has many possibilities. Honestly, there is so much potential in OLD MAN LOGAN. The artwork being produced in this book continues to be some of the best, and Jeff Lemire’s dialogue and plot lines are only getting better. With LOGAN coming to theaters soon, it’s a good time to be an Old Man Logan fan.