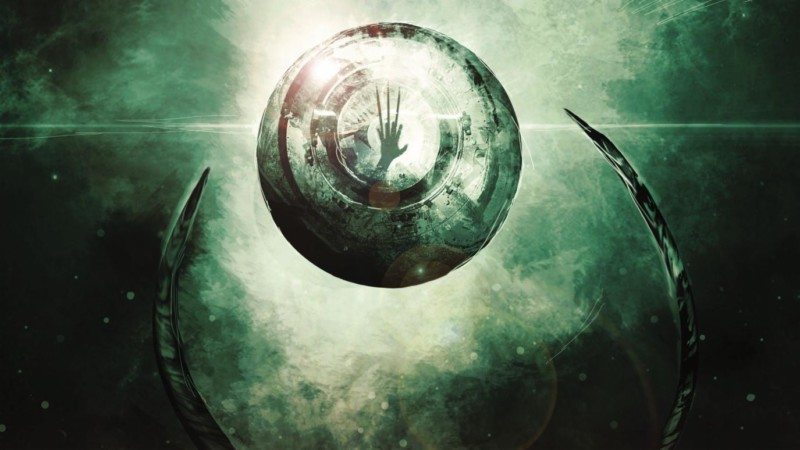 OLD MAN LOGAN #16 marks the return of artist Andrea Sorrentino and colorist Marcelo Maiolo after a two issue hiatus. The art style of these two in OLD MAN LOGAN has made the series really stand out, so it’s fantastic to see them back in action alongside writer Jeff Lemire. This issue marks the beginning of “Return to The Wastelands,” where Logan finds himself suddenly back in his dystopian future. Similar to former story arcs in this series, we are given flashback sequences through the eyes of Logan that give us clues to his current predicament. This formula has worked well thus far, and with solid writing and incredible artwork, OLD MAN LOGAN #16 delivers the goods that made this series a must read when it debuted last year. 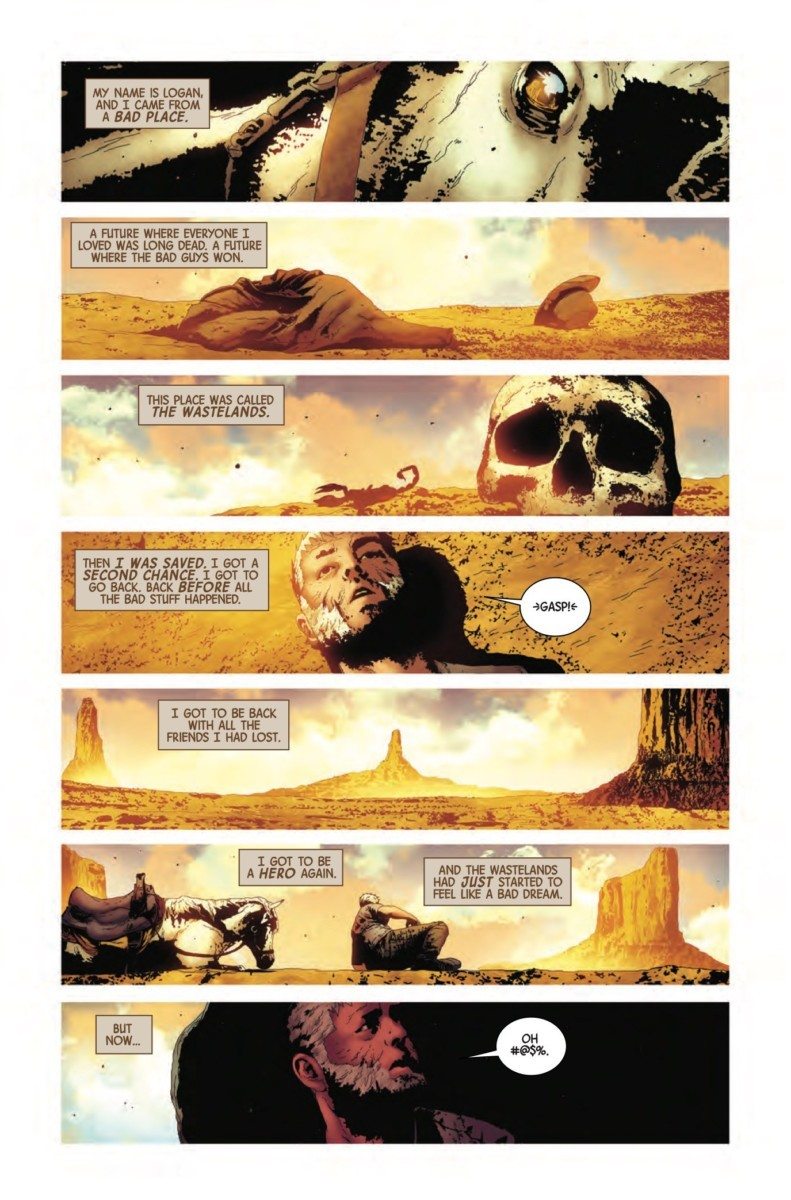 The story begins with Logan discussing how the Wastelands have slowly become only a sort of dream to him. He quickly realizes that he’s facing the harsh reality of being back in his original timeline. This sudden epiphany comes about because of a ghoulish looking tyrannosaurus rex’s attack on Logan. After being swallowed and slashing his way out, Logan thinks long and hard about how he came into this current situation.

READ: New to OLD MAN LOGAN? Take a look at why we think it’s such a good series!

Back in the proper Marvel timeline, it turns out that Logan receives a distress call from Puck of Alpha Flight. So, Logan takes the X-Shuttle to find out exactly what’s going on. The space shuttle he enters appears empty until he picks up a scent. To his horror, he finds that the Brood have attacked and captured his allies. 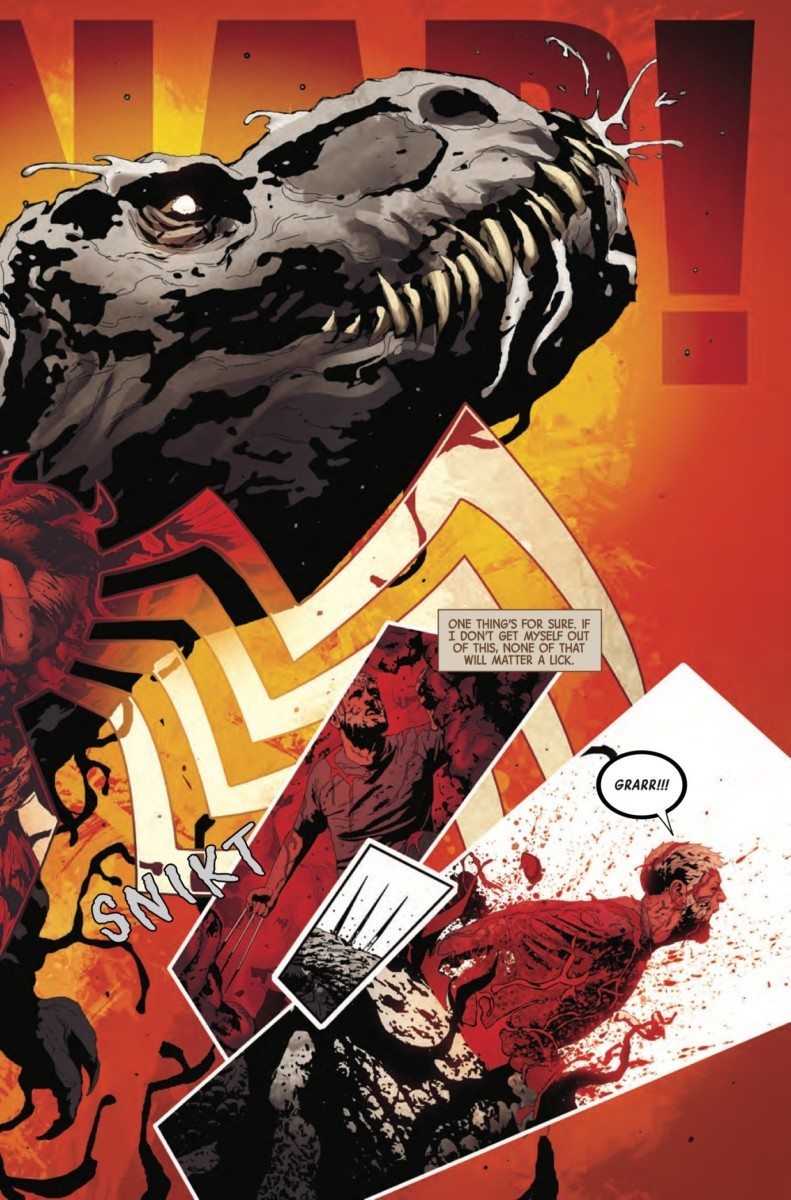 The story shifts back to Logan’s current location in the Wastelands. He wanders to Las Vegas in search of Danny Cage and Bruce Banner’s grandkid. Logan stumbles upon an empty house–and an empty crib–but soon finds Danny Cage tied up in a closet. She explains that Kang came and snatched the child. Naturally, Logan decides to go on a rescue mission. As he sets out, he keeps commenting on his body being cold.

READ: Unfamiliar with Old Man Logan’s involvement in SECRET WARS? Here’s a review of how his tie-in series ended!

The plot jumps back to space, where the Brood have taken control of both Sasquatch and Agent Brand. Logan attempts to fight off these two and is eventually rescued by Puck. While Logan and Puck discuss what’s going on, Logan is pulled through an opening in the space shuttle and thrust into the blackness of space. The issue ends with a pain-stricken Logan floating through the cold, empty darkness.

Overall, OLD MAN LOGAN #16 is a great installment. I enjoyed the return of this creative team since they clearly have chemistry when collaborating. The pacing of the plot is similar to the first story arc of this series, where Logan slowly narrates his situation with heavy internal dialogue. He also gives brief anecdotes on the history of his dystopian timeline, which allows us as readers to delve deeper into his world. The utilization of the Wastelands is also a resource that I’m happy to see Lemire using. The world Mark Millar created in his 2008 WOLVERINE run is something that should be taken advantage of: there are just too many characters and landscapes for storytelling in the Wastelands to be forgotten and buried in Marvel’s deep archives.

The strategy of jumping between timelines is also something that I enjoyed in this issue. It’s a plot device that allows a lot of story development to be covered while keeping the reader on their toes. I will say, though, that the narrative is a bit duller when in space. Because the scenes in space are flashbacks, it feels as though Lemire is more interested in the story occurring in the Wastelands. Consequently, the scenes in the space shuttle come off a bit generic and even rushed during fight scenes and dialogue, while scenes in the Wastelands move much more calmly as Logan narrates what’s happening. We as readers are given a wider window into Logan’s situation in the Wastelands. 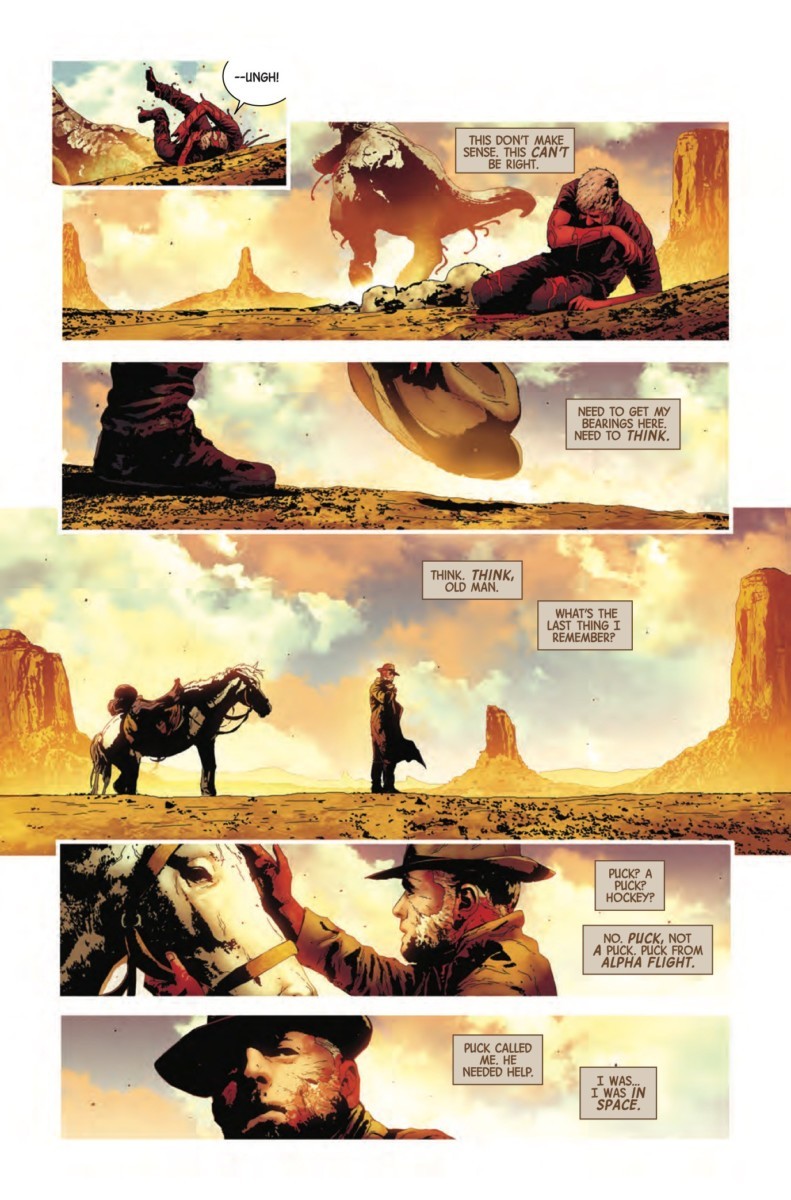 While Jeff Lemire’s plot lines are something to applaud in OLD MAN LOGAN, the artwork of Andrea Sorrentino and Marcelo Maiolo truly make the series shine. Sorrentino’s vivid drawings of characters such as Danny Cage and Logan himself are extremely compelling. You can really discern the love and fear on their faces before Logan decides to set out and find the missing child. Then, there are Maiolo’s colors that compliment Sorrentino’s drawings. His desaturated colors make scenes in the Wastelands appear almost dreamlike, which is appropriate for the mental ambiguity Logan is going through. I always enjoy how these two can make wide open landscapes appear so magical while portraying realistic closeups that are heavy with emotion.

READ: Need catching up? Here’s our review of the first issue of the previous arc in OLD MAN LOGAN!

OLD MAN LOGAN #16 ends on a cliffhanger that could lead almost anywhere, but it’s clear that this series still has staying power. After a mediocre story arc taking place in Romania, OLD MAN LOGAN returns to the Wastelands with compelling art and an intriguing predicament for our protagonist. It’s no surprise to me that the artistic break Sorrentino and Maiolo took during the Romanian arc tainted the series, but that’s just how comics work. With the inclusion of Alpha Flight adding a nostalgic touch, I’m hopeful to see what Kang’s involvement will lead to. I believe it’s safe to say that OLD MAN LOGAN will continue its solid run as long as this creative team stays intact.