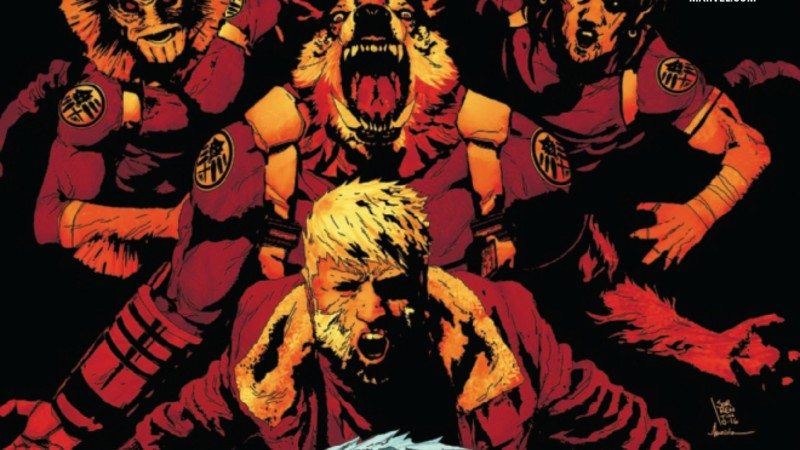 OLD MAN LOGAN #14 abruptly begins a new chapter in Old Wolverine’s life as he ventures to Romania in search of Jubilee. I say abruptly because this issue begins with Logan and Cerebra talking in X-Haven with no mention whatsoever of the events that occurred in the previous story arc, “The Last Ronin.” I felt as though some sort of explanation to the reader was missing, which is never a good thing. However, while plot shifts like this can can be frustrating for consistent readers, I think they have the potential to prove beneficial for new readers jumping on board. OLD MAN LOGAN #14 presents many fantastic possibilities and interesting characters but falters in its ability to delve deeply into them. 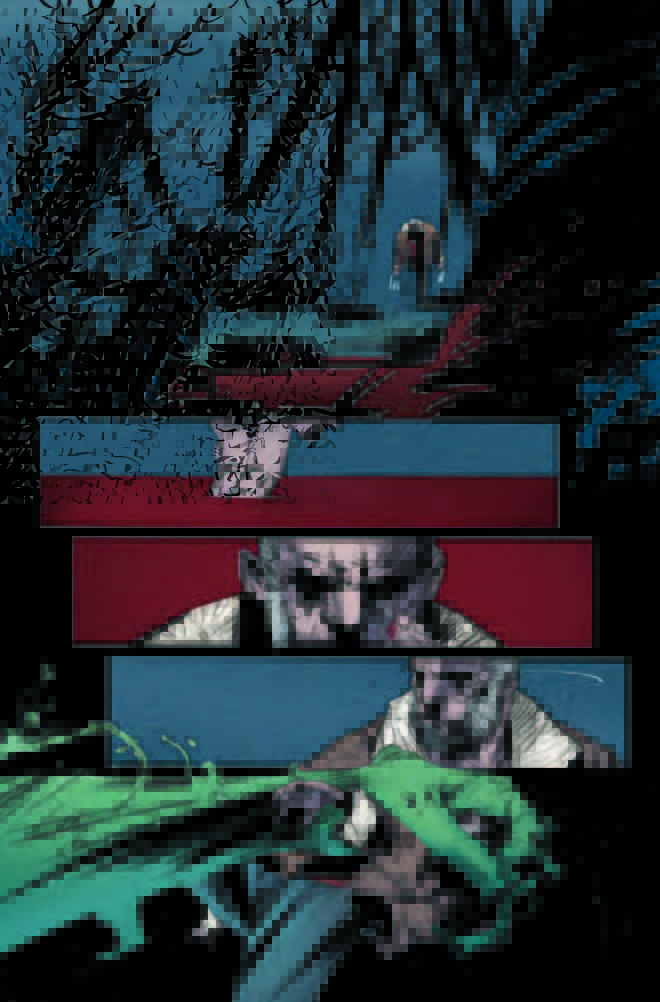 The story hits the ground running once Cerebra tells Logan of Jubilee’s last whereabouts: Romania. For those of you who don’t know, Cerebra is an A.I. containing information from the original Cerebro. Furthermore, Jubilee became a vampire a few years back. This makes her now vulnerable to Dracula, who is apparently calling vampires from around the world to flock to his castle. If you haven’t been reading other X-Men titles, these characterizations could be a bit confusing, as they were for me.

READ: Need updating? Catch up with our last review of OLD MAN LOGAN!

The story arc is titled “Monster War,” and the name becomes apt rather quickly. After being teleported to Romania, Old Man Logan begins investigating the appropriately spooky woods outside of Dracula’s castle, where he almost immediately encounters Man-Thing. An altercation occurs and soon enough the remaining Howling Commandos come out of the shadows, resulting in a light scuffle. Words and insults are shared as the Howling Commandos explain they’re looking for their missing teammate, Vampire by Night. A plan to take on Dracula’s castle is quickly concocted once the two parties realize they have similar goals in mind. 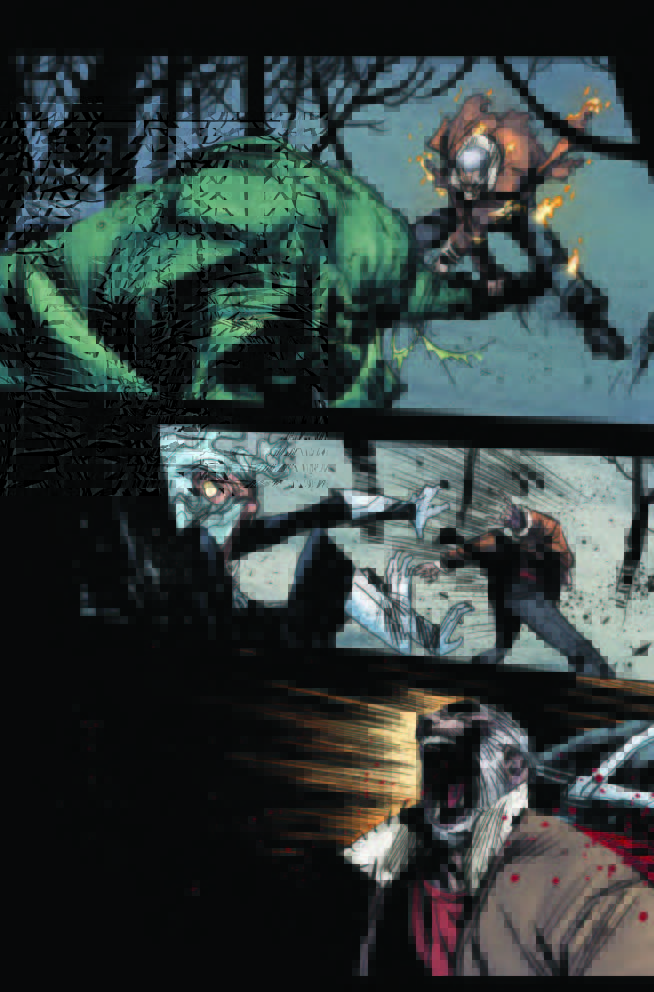 I thought the pacing of this issue was a bit rushed, and the new artwork represents this problem regrettably well. I’ll admit my bias towards Andrea Sorrentino and Marcelo Maiolo’s artwork in previous issues, so seeing artist Filipe Andrade’s drawings and Jordie Bellaire’s coloring threw me off. These two have big shoes to fill while Sorrentino and Maiolo take a break for two issues. The art in OLD MAN LOGAN has been one of the strongest aspects of the series, so the drastic shift in style caught my eye immediately. Andrade’s sharp drawings offer a rougher representation of Old Man Logan’s life, and while this is fitting with the Romanian setting, I felt he struggled a bit with his action sequences. There’s a point during the initial conflict where it appeared panels were missing because of how the sequence of events was presented. For example, Hit-Monkey attacks Old Man Logan at one point with a stake and it took some extra examination on my part to understand what exactly was happening. Sometimes this need to double check isn’t a bad thing, but it seemed like everything – the story, the art, the writing – was unfortunately rushed. 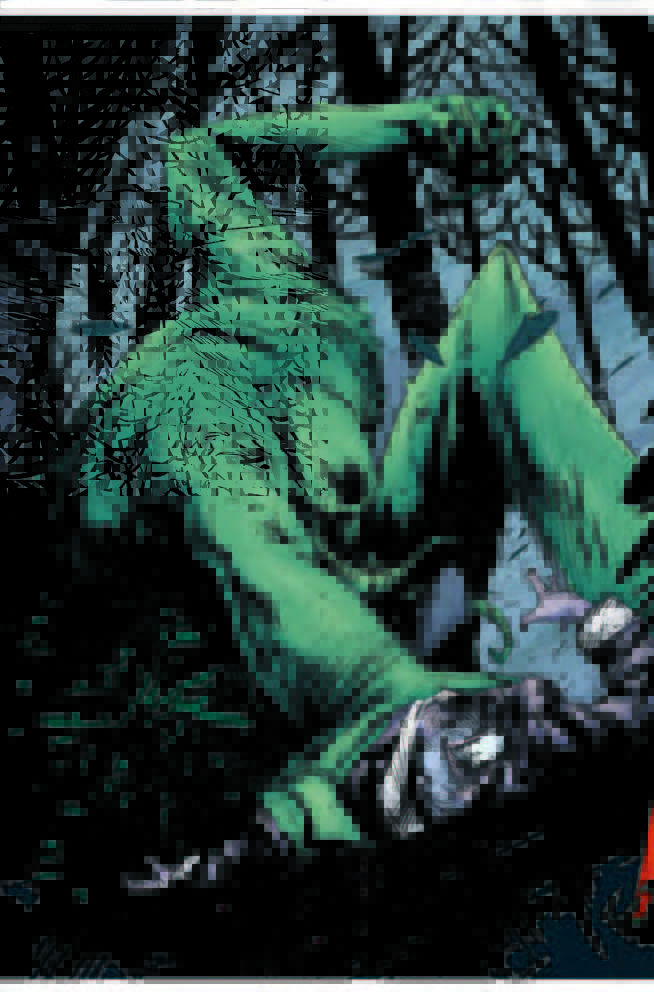 What I will say that I enjoyed about this issue is its continuation of sending Old Man Logan on worldly adventures that bring in all sorts of characters. Honestly, I haven’t read a popular mainstream comic featuring Man-Thing in ages. It’s good to feature characters that are a bit obscure. This allows readers to be exposed to more personalities they may know nothing about. And while this trope of Wolverine going off to save one of his female sidekicks is beyond old and comical, the idea of utilizing Jubilee’s new vampire attributes to bring in Dracula (who really is underused in the Marvel Universe) is fantastic.

READ: Unfamiliar with the HOWLING COMMANDOS OF  S.H.I.E.L.D? Read our review of issue #1!

The ending of this issue has the Howling Commandos of S.H.I.E.L.D locating Vampire by Night, who appears complacent with her new situation. A few pages later Old Man Logan locates Jubilee and it is unclear to the reader what side of the monster war she is on. Without spoiling too much, the final pages are the most exciting of the issue, and it has me extremely intrigued to find out what happens next.

Overall, this issue of OLD MAN LOGAN left me wanting. I honestly believe there could have been better plot development and internal dialogue from Logan himself. While I have no idea exactly where the next issue or so will lead, I can’t help but think this will be a fast story arc with too many missed opportunities. OLD MAN LOGAN #14 was the kind of comic that you can skim through in about five minutes, and while that’s not necessarily always awful, this series has too much potential to produce mediocre stories. As I said previously, the potential for the next issue is high, but if it’s rushed like this one, I don’t foresee the Howling Commandos and Dracula being fully utilized properly.