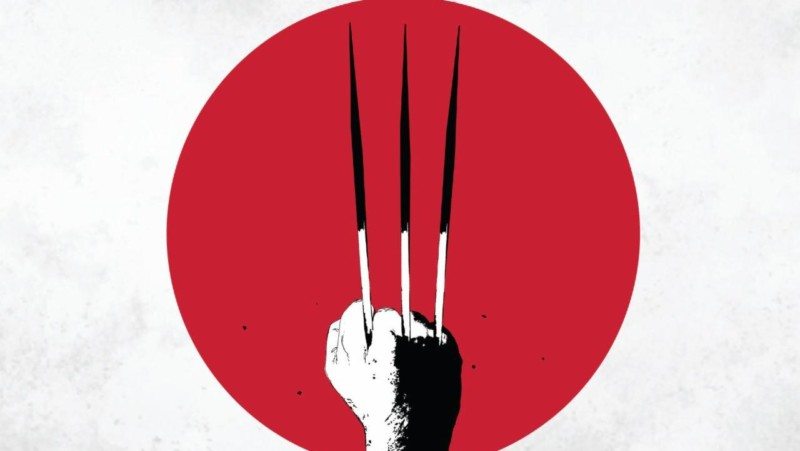 OLD MAN LOGAN #13 wraps up the “Last Ronin” story arc, a five-part tale that has Logan travel to Japan and experience parallels from his past. It has been as if Logan is going through literal deja vu, where he is actually experiencing the same tragedies from his past once again. Writer Jeff Lemire and artist Andrea Sorrentino do an excellent job showcasing scenes from Logan’s past and present, comparing them against each other beautifully. While this story arc could have been a little shorter, OLD MAN LOGAN #13 sets the plot for future events and gives the green light for Lemire to freely utilize the OLD MAN LOGAN universe created in 2008. 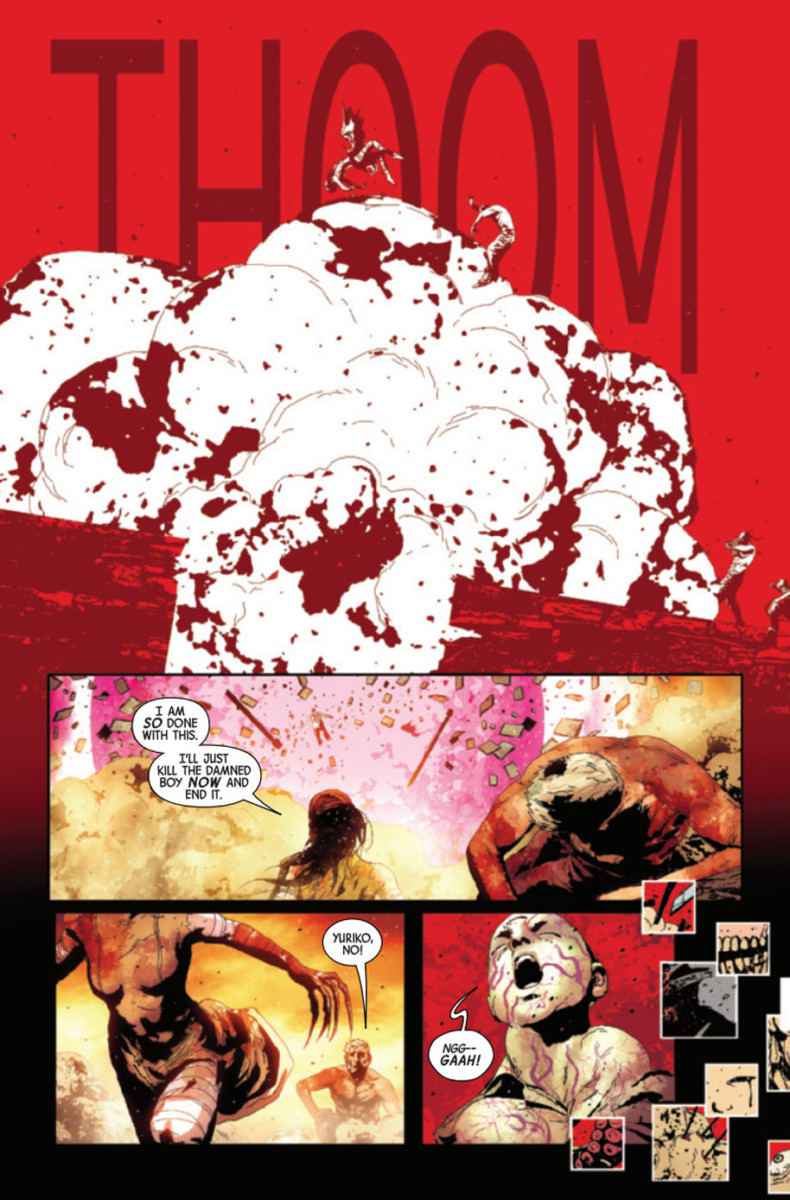 I want to first point out what was strongest with this issue and, in my opinion, has been the strongest feature of this series in general: Andrea Sorrentino’s artwork and Marcelo Maiolo’s coloring. In this particular issue, the art ranges from intense to serene. The combat and action scenes are filled with desaturated coloring that has been a staple in the artwork for this series. This coloring style gives the atmosphere both a hazy and beautiful look, which fits well for the paralleling timelines. The style is further used when the young Master turns into a giant, hideous, psychic-like creature. This monstrosity looms in the sun-stricken sky, and his exposed skull is fantastically detailed. It is the type of monster I’d expect to appear in a manga. While I found the creature to be a bit ridiculous for this scenario, I admit the resulting destruction is displayed magically by Sorrentino.

Then there are the oddly romantic scenes, where flashbacks of Maureen and Logan are shown to be sweet and sincere despite the impending doom surrounding them in the background. At one point we see them in their past in the wastelands from Millar’s 2008 storyline, and there’s such a sad and beautiful feeling about it. It is these types of juxtapositions that make the artwork so interesting and worthy of staring at for minutes at a time.

READ: New to OLD MAN LOGAN? Check out why you should be reading it!

The writing is solid and on par with the series thus far. Lemire continues to write Old Man Logan’s tone in a way that really sets him apart from the younger version of Wolverine that we are all familiar with. Old Man Logan truly is a wiser and more experienced individual, and perhaps that is why some of the classic Wolverine tropes continue to work well in this series. We have a man who has lost everything more than once. In fact, if we’re really peering into his past that predates Marvel’s “history,” we know how many times Old Man Logan has had to pick up the pieces and move on. This is a theme that is always occurring in a Wolverine storyline, yet it seems fresh here.

There are three pages in the middle of this issue where the Master peers into Logan’s mind and sees his pain through an array of images. Yet through all of this suffering, Old Man Logan still reiterates the ideology that one always has a choice to make when deciding his destiny in life. “All I know is what’s here and now,” Old Man Logan says, “and just like me, you got a choice.” I think this brings the story arc (and the series as a whole) to a solid pinnacle. 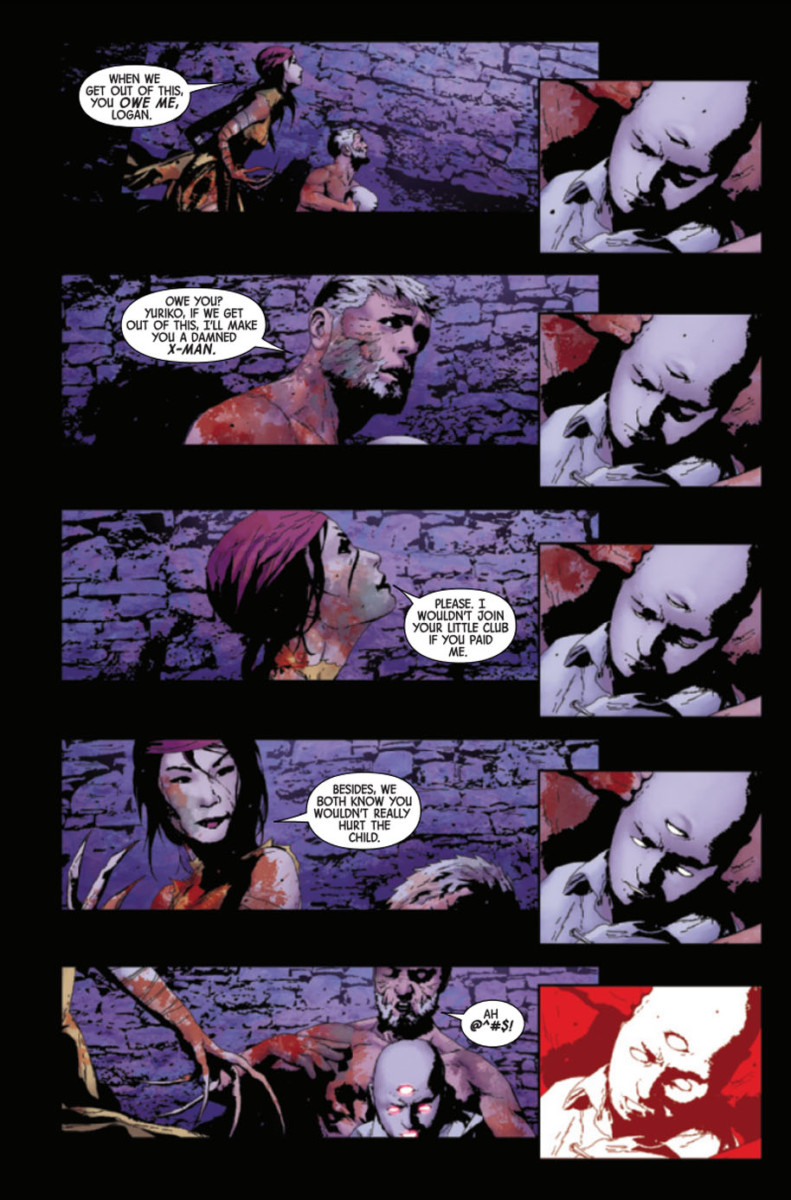 My two biggest gripes with the issue have been problems I’ve had with the story arc as a whole. The first is Wolverine’s relationship with Lady Deathstrike. She and her gang of Reavers destroyed Old Man Logan’s new life in Killhorn Falls by killing innocent citizens to gain his attention. This caused Old Man Logan to follow her to Japan. This on top of their general history together should not have them talking the way they do while stuck in the well they became trapped in during the previous issue. Obviously, it’s a common theme to unite with one enemy to defeat a more powerful foe, but they’re just too friendly. It left a bad taste in my mouth. Perhaps this goes along with the idea of Logan needing to let everything go, including grudges. However, that’s a strong maybe.

My second concern is that this story arc was stretched too far. While it produced great characters (I look forward to seeing Sohei and The Silent Order again), I felt “The Last Ronin” could have been completed in four issues rather than five. This issue is paced decently well, but the giant monster the Master turns into is a bit ridiculous and distracts the reader from the message that could have been reached at a much faster rate. What made OLD MAN LOGAN so strong in its first half is that each issue was something new: it was exciting and fresh and unexpected. It didn’t linger. I’m hopeful for future arcs, and while I loved the art and sentimental message in this issue, I was relieved to see it come to a conclusion. 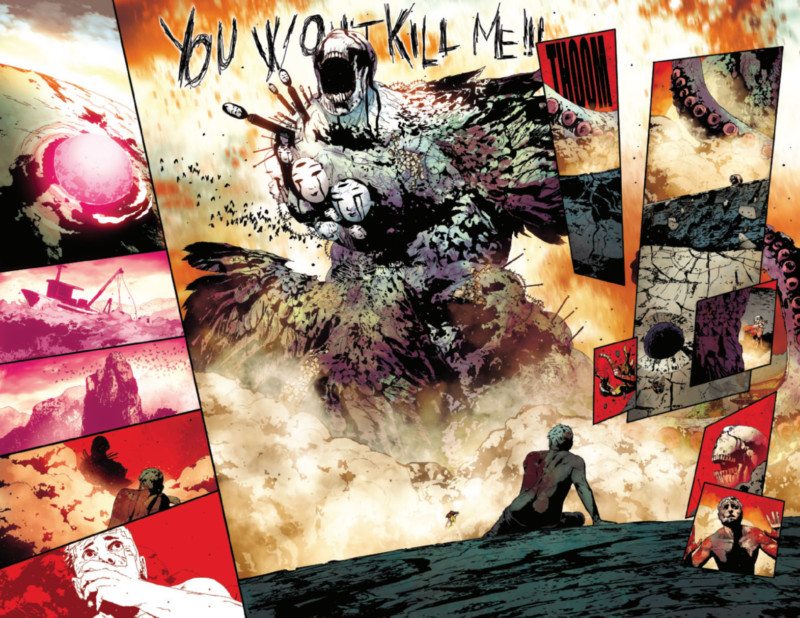 READ: Need a refresher? Catch up with our review of OLD MAN LOGAN #12!

Overall OLD MAN LOGAN #13 was just above mediocre. It was everything you can hope to expect in an average issue, where future stories are set up and the overall theme and message are continued. Much of this issue, largely because of the artwork, reminded me of Wolverine during Bendis’ HOUSE OF M storyline due to intense flashbacks and universal parallels. OLD MAN LOGAN #13 proves that his greatest hindrances as a character — his troubled mind and twisted past — prove to be what shapes him to be the warrior (or should I say samurai?) he truly is. While I was happy to see this storyline come to its five-month conclusion, it left me itching for more expansion and exploration in the life of Old Man Logan.