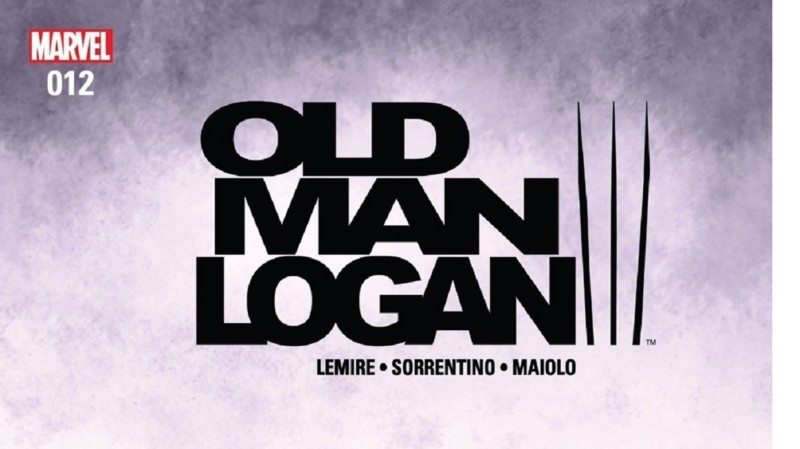 OLD MAN LOGAN #12 continues the ‘Last Ronin’ story, which once again has Wolverine in Japan. This time though, we’re watching Old Man Logan once again fearing that the world he’s entered may become the nightmare world he left behind. Logan has gone to face the dangers of the Silent Order, a group of warrior monks that have made it a priority to kill him. The issue starts with Logan facing off against the head of the Silent Order – a young boy. However, this is a boy who is able to hold Logan with a single thought. He then reveals a vision that years from now, when the boy is old, Logan will kill him. 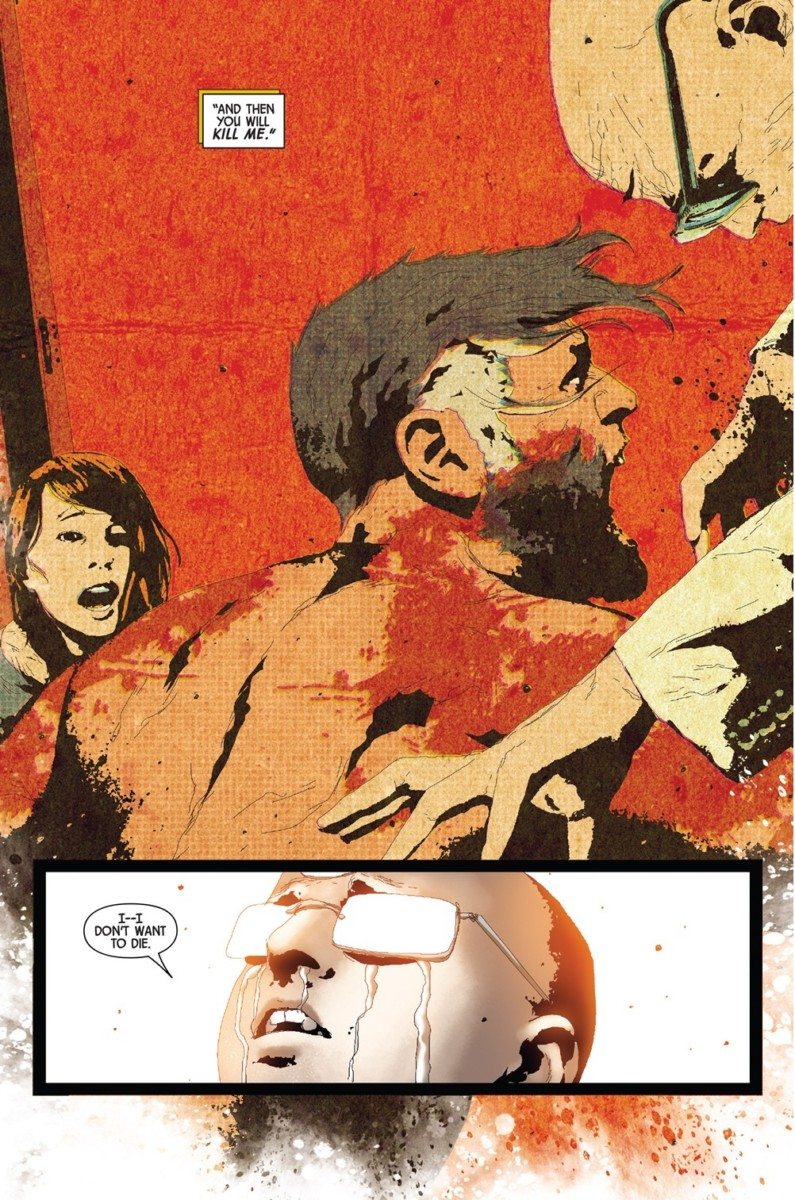 This is a fascinating twist, and one of the highlights of the issue. Instead of an all-powerful monster, Logan’s foe is simply a child that has had his first real glimpse of death. Now, like many of us when we first realize death is real, he is desperate to stop it, even as Logan tells the boy the future is now unclear for the both of them. Unfortunately, this is one of the few highlights of an issue that reads as setup for a more epic conclusion.

LISTEN: The legendary Chris Claremont, writer of more X-MEN comics than anyone else came to the ComicsVerse office for an exclusive interview!

This may be an alternate version of Wolverine, but writer Jeff Lemire adds all the tired clichés that necessitated the original’s death. Logan travels to Japan for another personal quest about himself. He offers a powerful and dangerous child trying to kill him a place with the X-Men. He continues to offer until he’s forced to attack and beaten back. Then Logan is tortured while spouting an inner monologue about his own life of pain. It’s Wolverine 101 and there really isn’t much to this issue beyond that.

Still, there are some highlights within the pages. Andrea Sorrentino presents bright and vicious artwork, with clear bloodstains mixed with slightly blurred images. Lady Deathstrike actually adds some pointed humor, which is a welcome break from the brooding. Japanese images and motifs that look organic, like the dragon shaped panel boxes,  are also good touches. Logan also gets a good line in his monologue about his fear-stricken enemy “When you fall that far, when you lose all control and got nothing left to grab on to… all that’s left is an animal.”  It’s a tad obvious to compare himself to the boy in this way, but a good trick nonetheless. It also leads into the main thing that separates this Logan from the original: his continuing recollection of his wife Maureen.The alternate history is a vital addition to OLD MAN LOGAN, as it allows for twists and turns in the psyche of a character that’s been heavily examined over the years. Without it, this is just old school Wolverine that really doesn’t have any tricks left to show us. 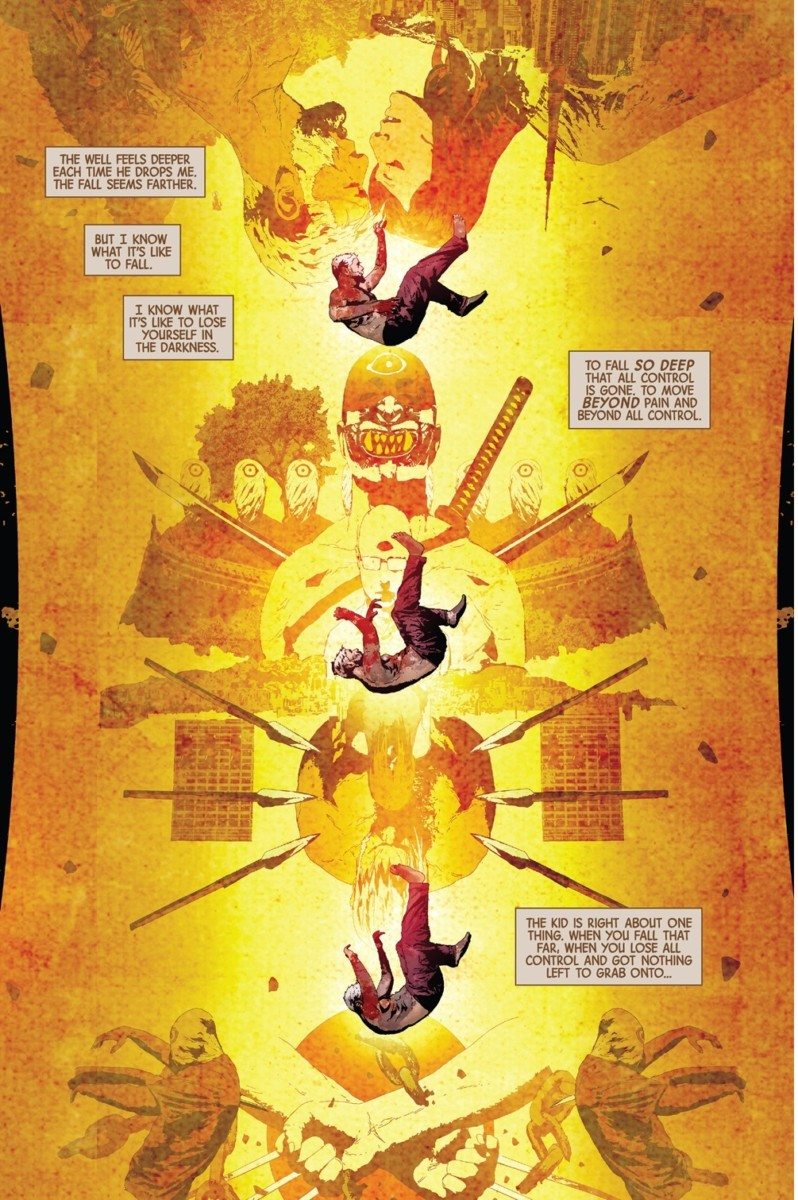 The issue ends with a set up for the final part of ‘Last Ronin.’ Again, it has a good twist, with the boy falling into the trap with Logan and Deathstrike, with Logan pressing his claws to the boy’s chest as the last of the Order looks on (though we get another trope in Wolverine saying ‘Bub’ once again). It’s a serviceable ending, as there’s now questions as to whether or not the boy’s vision will come true, despite Logan’s insistence he doesn’t want to kill the boy. But it’s not enough to redeem a standard issue, that, apart from its art and further exploration of this alternate Wolverine, is clearly filler for the finale. Still, the touches of Old Logan’s life coupled with the great artwork (which is the best thing here) and the psychological nods do manage to at least make the finale look promising, and that’s probably the main goal that this issue should have.  Hopefully, Jeff Lemire will focus on the good points of this issue and deliver on that promise.