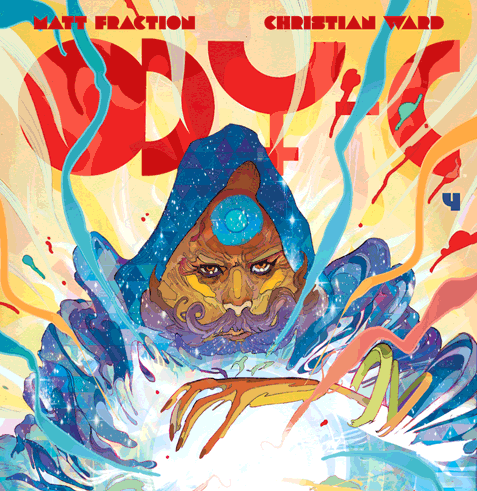 Most people are familiar with the epic The Odyssey from high school literature class; but whether you liked it or not, Kay Honda is convinced that Matt Fraction and Christian Ward’s ODY-C Volume One – Off to Far Ithicaa is well worth the read!

For lack of a better opening adjective, ODY-C is cool. With the recent upwards swing of new storytelling and the beautiful marriage of analog and digital art in sci-fi themed comics, ODY-C stands out. Being a fan of Rick Remender and Greg Tocchini’s Low, as well as Jeff Lemire and Dustin Nguyen’s Descender, my fascination for the use of watercolor-styled art for stories set in space led me to Matt Fraction’s reimagining of The Odyssey. For those who have only heard of the comic, it’s easy to simply chock up the endeavor as just a feminist, gender-bending reinterpretation of Homer’s epic . However, I found that in addition to the refreshing sight of a strong female protagonist in comics, the reimagining of the epic becomes its own animal in Fraction’s interesting writing style and Ward’s imaginative use of color and design. 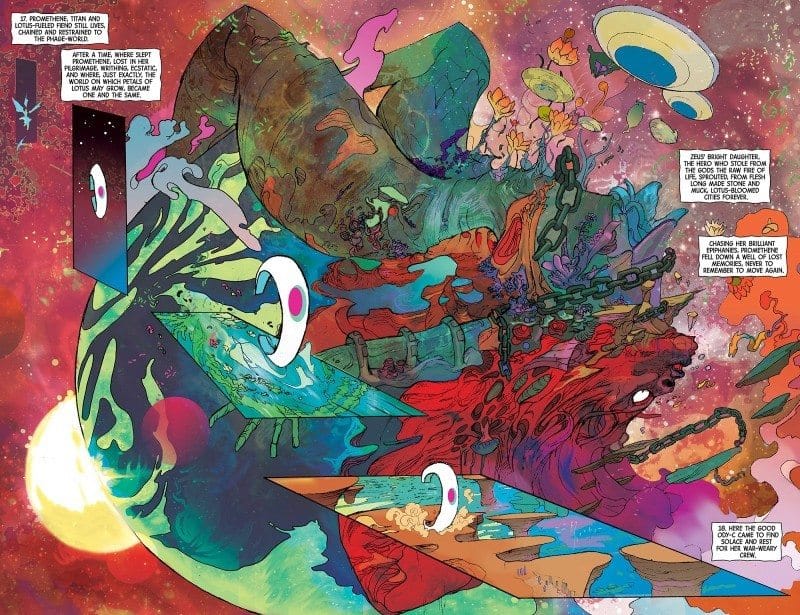 What struck me when I picked up the first issue is how cinematic the comic read. As I continued to follow the series and pick up the volume at its release, I found that what kept me reading was not how accurate the story was to the original epic, but the creative embellishments and licenses taken from it. Fraction’s writing oscillates between the formality and drama of Homer’s spoken tale, and a certain colloquial casualness in the characters’ dialogue, especially among the Gods.

Fraction has the ability to take the pettiness and humanity instilled in the Greek Pantheon’s original permutation and characterizes the Gods accordingly to this sci-fi saga. Not only is Zeus the jealous and power-hungry God(dess) we all know and love, but she’s vindictive, cruel, and selfish, even among her fellow Olympians. A relationship that is more thoroughly developed is the one between Zeus and Poseidon in relation to Odyssia’s return home. Fraction takes the liberty of showing a more conniving, rather than ruthless, side of Poseidon than the original story, and how she attempts to manipulate Zeus into leading Odyssia astray in the vast, oceanic space that is Poseidon’s domain. In addition to these deeper characterizations of the Gods, Fraction’s gender-bending serves as a nuanced appreciation of the original roles these characters played as men and women alike in the original story. 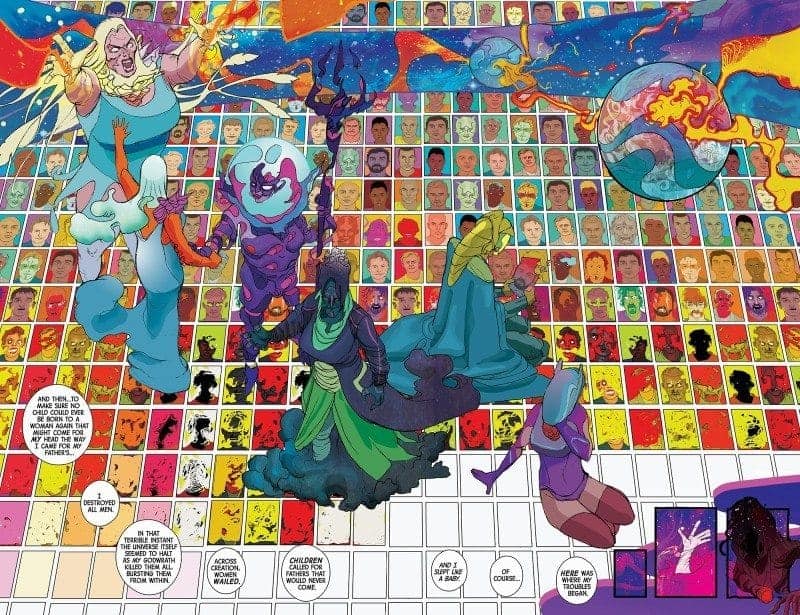 Not only does Fraction show an appreciation for the original characters, but also has no problem developing original stories of his own. A third gender exists in the ODY-C universe, referred to as the Sebex, an interesting, hermaphroditic gender created by Promethene (Prometheus), having brought the ability for humans to procreate in a world that has eradicated all human men, instead of the original Prometheus story, of him bringing humanity fire. Fraction does not shy away from the oft-argued and discussed issues of cultural, gender identity, but embraces it in this series by alienating what we all are so submissive and compliant to. The story is heavily related to procreation and the biological necessity of man and woman, subverting the power dynamics in more than just “switching” genders to see how it feels. Aside from this clear storyline based in gender politics, the characters themselves are left to feel simply human and relatable without the inclinations to fall back to what we culturally understand as the male, female, masculine, feminine experience.

READ: OUR THOUGHTS ON BATMAN: THE DARK KNIGHT RETURNS, ANOTHER COMIC BOOK CLASSIC!

By gender-bending all of the characters, Fraction has allowed a certain sway and importance to each character introduced in the comic. While Zeus of the Greek mythology is known to have born many children and created several legacies, Fraction’s Zeus appears to be threatened and hateful to her possible heirs or descendants. She demands purity, and sees humans as a species that needs to expire so that her throne is not taken, so leading her to removing all men from the picture. This parallels with Odyssia’s struggle with her own legacy, having a child awaiting her in Ithicaa, a son, Telem, one of the few men/treasures left in the universe.

There is a Sebex name Ero, a concubine that falls in love with Odyssia in one of the first issues, in my mind, taking the role as Calypso on the island of Ogygia, imploring him to stay. Ero is an important part of Odyssia’s development in character and in story because Ero expresses her desire to bear Odyssia’s children and her belief that Odyssia does not want to go home. Not only does this fit perfectly with the interpretation of The Odyssey that war-worn Odysseus feels ambivalence for his Homecoming, but it also fits with the overall theme of legacy. Much like Zeus, Odyssia hesitates to create descendants, especially in a world where children and procreation are highly valued.

Now, it may seem that Fraction’s writing seems a bit disconnected or hard to follow (especially when considering and contemplating author’s intent), but for me, I find the alienation and non-commital attitude of his writing The Odyssey is different. And sometimes, that’s good enough for me. To perfectly pair this kind of writing, is relatively newcomer artist, Christian Ward. As someone who has tried and failed time again to develop artistically, seeing art like Ward’s is inspiring because of its ability to translate and interpret the writing in such a way that is so fulfilling. Like any proper writer-artist relationship, one can tell that Ward successfully reads and ingests what Fraction is writing, while standing out in his own creatively. However difficult it might be to explain in words what kind of art Ward produces, in the basest sense, Ward is able to create the beautiful and chaotic world that Fraction is laying down.

Not only talented in anatomical accuracy and ease of hand, Ward uses and masters all tools, such as color, as a hyperbolic expression of the chaotic and cosmic, yet natural, movements of space. He depicts Odyssia’s control of the ship and her crewmates in such a way that is abstract and beautiful. One reviewer describes it aptly as “psychedelic,” which is appropriate—if not essential—to bringing Fraction’s take on the epic come to life.

So, in a word, the series is trippy. It’s not at all easily digestible and it might not be as “deep” or thoughtful as you might want it to be. But if read in a certain light, a sincere intellectual interpretation of it, as well as pure, childish enjoyment, is possible. Much like a psychedelic drug, it takes you on a journey that is vast and important, as well as infinitesimal and standard. And if all this doesn’t suit your fancy, at least you’ll get a chance to see Odyssia and her crew against the Cyclops, a classic obstacle in the Greek epic that we all remember. And this blinded, female Cyclops, instead of screaming in anguish for “No Man” or “No One,” – a cruel and clever trick – the Cyclops screams, “Help your poor daughter! Avenge she that suffers this violence at All-Men’s black hand! Retribute she fouled of All-Men’s grim crimes! It’s All-Men that rendered me thus! All-Men!”

READ: CHECK OUT MORE FROM KAY!