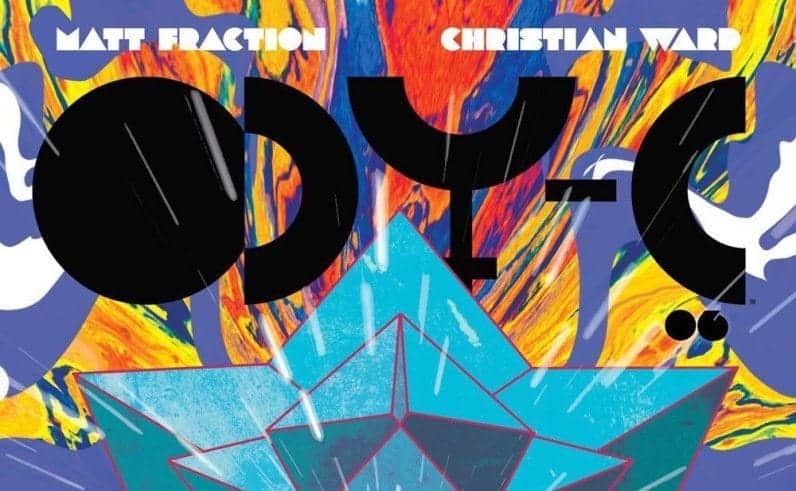 Having just reviewed the first volume of Matt Fraction and Christian Ward’s ODY-C, I was excited to see where the sixth issue would take me. Would we progress further into Odyssia’s journey home? Or get a better understanding of the emotion behind the machinations among the gods? Or better yet, do we get to see how Telem(achus), Odyssia’s waiting son, deals with his mother’s suitors in Ithicca, like in the original epic?

In fact, none of these things happen in the sixth issue. But this does not prove as a disappointment in any way.

It is standard protocol for a story arc to reach some kind of conclusion after a set of five or six issues, before continuing through the series. In this case, the first five issues of ODY-C were collected into the first volume, Off to Far Ithicca. Yet again, Matt Fraction throws us a curve ball in the already twisted and tumultuous style of his narrative: he begins a new narrative, altogether. Not only that, but he harkens to other old classics, such as 1001 Arabian Nights. To quote a very appropriate yet overused idiom, “the plot thickens…”

Tell me more, you might ask. Well, that’s precisely the reaction I had as well. And even now, I feel ill equipped to fully describe what I just experienced.

Reading issue six alienated me once again to the initial joy and naivety that one is granted when first picking up a new comic. A new protagonist to focus on, a new setting, a new everything! If not for Christian Ward’s notable and stylized representation of this cosmic universe—in both senses of the word—I would have been at a loss as to where the story was going. Much like how I initially reacted to Matt Fraction’s creative liberty from the original Odyssey, I found myself more intrigued than frustrated. What new batch of psychedelic and mythological beauty will he be guiding me through, next? In this sense, Matt Fraction has become my Virgil.

READ: Feeling the analysis? Check out our feminist perspective on WONDER WOMAN in the New 52!

Literary references aside, the sixth issues begins a new story arc, presumably within the same universe as the one we found Odyssia in in the first five issues. This is made certain by the fact that our new protagonist, a male identified as a “great bull from yon Troiia,” is exalted in a way for his rarity by his Queen, of all Achaean space, good Ene. To be frank, this may mean nothing to you at first. Without further study and analysis, this introduction made little sense to me, as well. What we can gather, at least, is that we know who good Ene is supposed to be representative of from old Homer’s tale: Menelaus. As we follow this new protagonist into reading his own legends to pass the time when his good mistress didn’t need him, we come to realize that he is meant to fulfill the role as Helen; the most beautiful woman in the world. The one to cause a historical battle between two great companies. This is He.

If you thought the first five issues of ODY-C were already difficult to follow or understand, the sixth issue does nothing to alleviate that. But if you’ve come this far knowing that what you’re getting into is a commitment and requires a great deal of study, you’ve come to the right party. Not only does Matt Fraction call upon other greats in historical literature—such as the promise of Moby Dick in the future, and a re-imagining of a Sumerian myth—but he also finds a way to discuss very important distinctions between the treatment of men and women. Again, as I’ve said before, this is not just about gender-bending for the sake of making the opposite sex the “other.” This issue is, fundamentally, about human rights. As overly political or preachy as that might seem, Matt Fraction is able to abstract our reality so heavily and easily into this exotically unique interpretation of outer space, using classic mythologies of all cultures, with the aid of Christian Ward’s outstanding artwork. In doing so, he brings to light many issues and topics that remain problematic today, such as rape, consent, and slavery. I’m immediately reminded of Kelly Sue DeConnick’s current work with Valentine De Landro, Bitch Planet. While Bitch Planet’s universe is more of a hyperreality (see Bitch Planet podcast for a more in-depth analysis), the ODY-C appears to be creating a mythology of its very own, ever-evolving and changing, as mutable as nature and the cosmos themselves. And within this mutable abstraction, there is a message to humanity. What myth can we say doesn’t teach us some kind of moral or new understanding of how the life works and how we fit into it?

LISTEN: Alan Moore’s SWAMP-THING was one of the famous writer’s first times out! Check out our analysis of his amazing run with this comic!

Having already shown my deep appreciation for Christian Ward’s art having the ability to so full-heartedly embrace Matt Fraction’s many permutations and experimentation in writing, it cannot be said enough. This teamwork achieves such an effortless and strange kind of beauty that harkens to Barbarella of the ‘60s, and with such seeming ease and precision, that it’s difficult to think of any other artist who could have been more appropriate for the job than Christian Ward. There are many artists out there that I can think of that I adore for their organic interpretation of space through watercolors and other media, alike. But specifically for Matt Fraction’s undertaking in writing ODY-C, I feel Christian Ward, as a new artist, sees the piece with a fresh set of eyes so necessary to bringing Matt Fraction’s innovative writing to life.

This is not a comic that simply spits back all the old mythologies we know. As gratifying as that would be alone, Matt Fraction and Christian Ward push to complicate and challenge the reader, much like a teacher would a student. In fact, as a reader, I found myself researching vehemently to understand the references he makes in this issue, leaving me at a loss myself. But in understanding what Matt Fraction is doing, I find myself appreciating not only his work, but also the classic greats, as well. He mentions in a message at the end of this issue that he’s in the middle of reading all of these famous texts such as 1001 Nights and Moby Dick, and acknowledges that yes, there is the Sumerian myth of Inanna and Shukaletuda, that so perfectly fits the themes of female empowerment and further analysis of male power. And yet in spite of all this, he’s still not quite sure what he’s doing (23 ody-c issue #6). In referencing such strong female mythologies from Sumerian religion and incorporating and inverting the roles of men and women in subjugation and power in famous texts, Matt Fraction knows exactly what he’s doing. He’s expressing an old narrative in his own creative way to shed light on the politics of power and sexuality.

READ: SECRET WARS is coming to an ending soon, but was the event even worth it? Check out our retrospective on the event so far!