If Matt Fraction is known for anything but being a fantastic storyteller, he is also known for being married to fellow writer, Kelly Sue DeConnick, a loving spouse and partner in crime in the promotion of human rights and feminism. For those of you who have read Sex Criminals, you’ll understand that the work that he’s doing with Chip Zdsarsky is both comical and introspective of important cultural wrongs that could be righted. His eighth issue of ODY-C continues that tradition of quality storytelling coupled with important cultural themes, in a world that looks otherworldly, but very much still parallel to our own. Needless to say, the new issue of ODY-C does nothing to disappoint.

For those of you only just hopping on board this “Odyssey” with us (yes, I did just do that), I strongly suggest you check out ODY-C Volume One: Off to Far Ithicaa, before getting into this unique series. However, if you pick it up from issue six, you will still get your moneys worth of beautiful imagery and well-rounded story. In fact, from what I can understand, this arc will be focusing primarily on the isolated city of Q’af; He, the Man Whore of Troiia; and Queen Ene on her travels.

If you caught my review of issue six then you know that Matt Fraction includes some elements of the classic story, 1001 Nights. With closer inspection, I realize now that this story arc in particular relies heavily on the storyline of that classic with the boy kings, Hyrar and Zhaman being permutations of the Shahryar, the fictional King of kings and his Sultan brother, Shah Zaman. In the original story of 1001 Nights, the King finds his first wife unfaithful. This leads him to the promise of marrying a new virgin every day, as well as beheading the previous day’s wife, so that no wife could ever have the chance to be unfaithful to him. By the time Scheherazade, the storyteller and protagonist of the story, appears on the scene, Shahryar had killed 1000 brides. Scheherazade attempts and succeeds to pay tribute to all the previous wives the Shah had killed and save all future women with a brilliant plan. As most of you know, she tells a story to the King every night for 1001 nights, never finishing any of them to encourage the King to keep her alive until dawn, when she could finish the story.

READ: Want to catch up on ODY-C? Check out our previous reviews!

This little background history into the 1001 Nights story may not be wholly necessary to enjoy issue eight of the ODY-C, but it certainly does give the reader a deeper appreciation of what matt Fraction is doing here. As stated in previous issues, Matt Fraction is creating something very interesting in his marriage of classic storytelling with more modern and science-fictional circumstances. That being said, all the themes that he draws from these stories are reflective of what is important in culture today. For example, we follow two storytellers in this arc, one following Queen Ene, and the other following He. 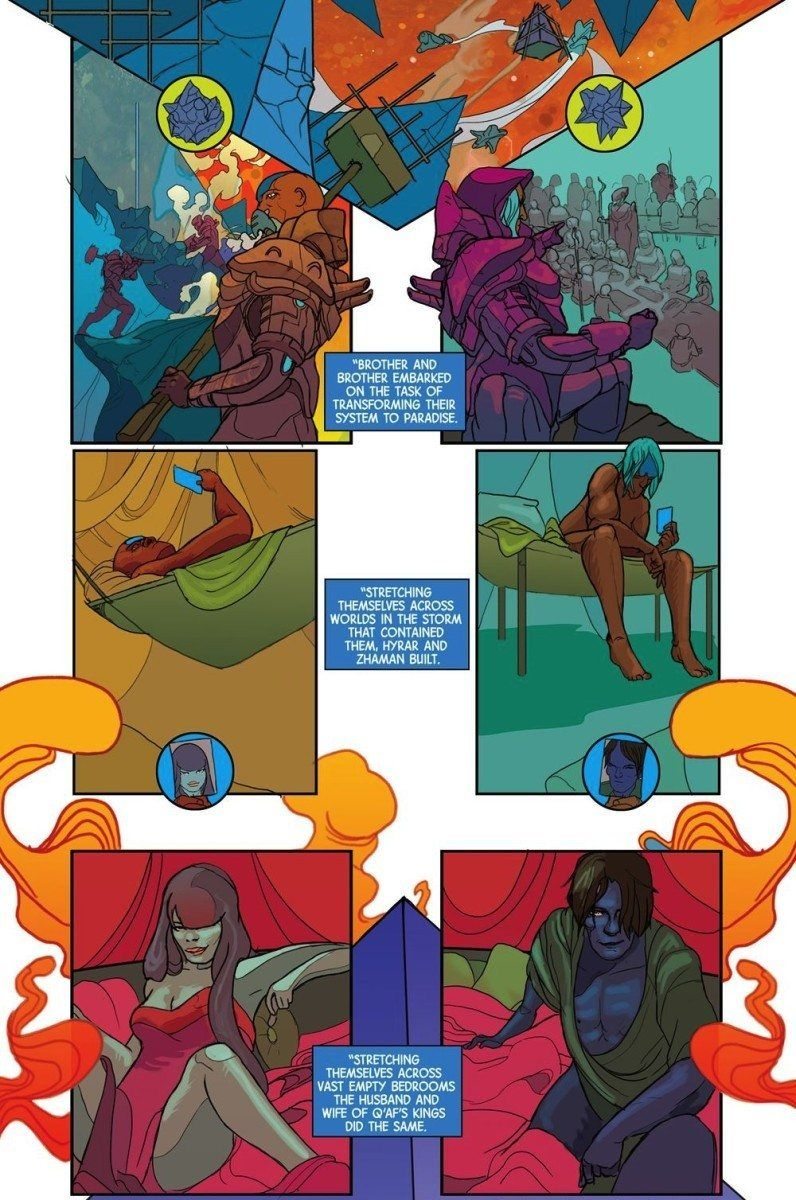 After He escapes his abuser with the boy that also worked at the brothel, the boy continues the story of why Q’af has a tall pyramid that bleeds blood at sunrise, first featured in issue seven. The storyline follows 1001 Nights’ background story with King Shahryar and Shah Zaman, with Shah Zaman finding the King’s first wife unfaithful, and so decreeing that he will take a wife and kill the previous with each passing day. Queen Ene, too, is told a story by the one-eyed man that joins her ship. His story is more of a fable that focuses on a girl of Q’af who runs, trying to find a way out. In her flight, many drunken men chase after her, cornering her, raping her, and killing her.

LISTEN: Catch our latest podcast covering the origin of the Red Hood!

I have to force myself to stop from giving too much of the issue away because it is such a joy to read. What I will conclude with is this: Matt Fraction and Christian Ward do amazing things in this series to truly give the art of storytelling a lot of heart. Not only do they succeed in writing and illustrating in a gorgeous and special way, but they also take hold of the beauty in classic stories we all know and love and transform them. This issue, especially, really hit home for me in its execution. ODY-C is not just a story that’s adapted from old stories. It’s a story enveloped and intertwined with many other stories, told by different people, webbed thematically so that not only is a cohesive universe made, but a compelling and thoughtful piece that sticks with you. Christian Ward’s art thrives and breathes in the gorgeous splash pages, and his panel organization and use of negative space for symbolism is enviable. I cannot stress enough how much of a dream team I find these two when it comes to ODY-C. 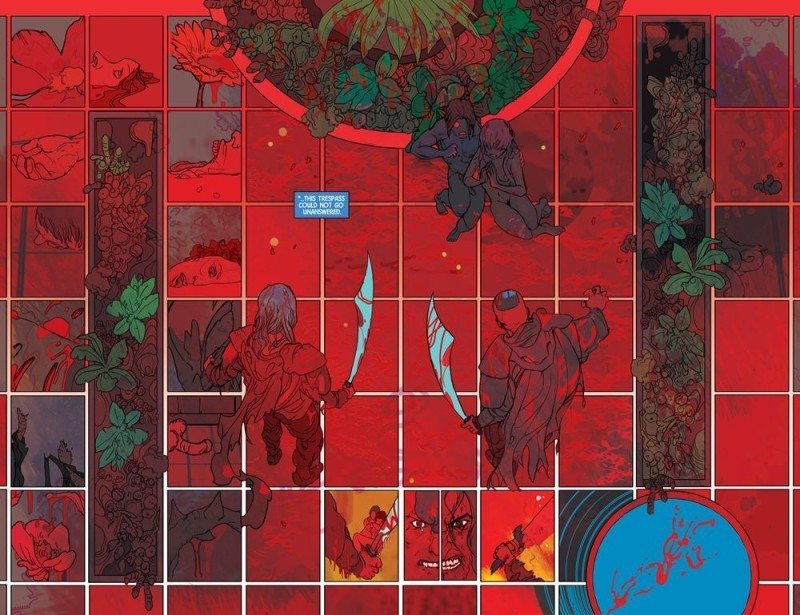 What started as a seeming knock-off of the Odyssey, has been transformed into very much an odyssey itself. And on this odyssey that you can choose to embark, Matt Fraction and Christian Ward triumph in their ability to tell a story with all the moral, philosophical, and political themes to hit you where it hurts. In previous issues, Matt Fraction does not shy away from showing the clear double standard in the way men and women are portrayed in fiction, locking into important subjects such as rape, rapine, and violence as a means of subjugation. He also clarifies the line between such subjects by showing men and women who embrace open sexuality. The final question I’m left with when reading this issue is: Why are women still seen as responsible for something that is done to them? Even in stories I love?

READ: In case you needed more convincing, check out what our Jamie Rice says about new TV show SUPERGIRL!

As Matt Fraction himself says in his notes on every final page of his issues, “Anyone can tell you these are myths and not literal histories. Yes. Of course…Histories get erased. Stories live on, eternal…What if our stories didn’t say don’t get despoiled; what if our stories said, don’t despoil instead?”