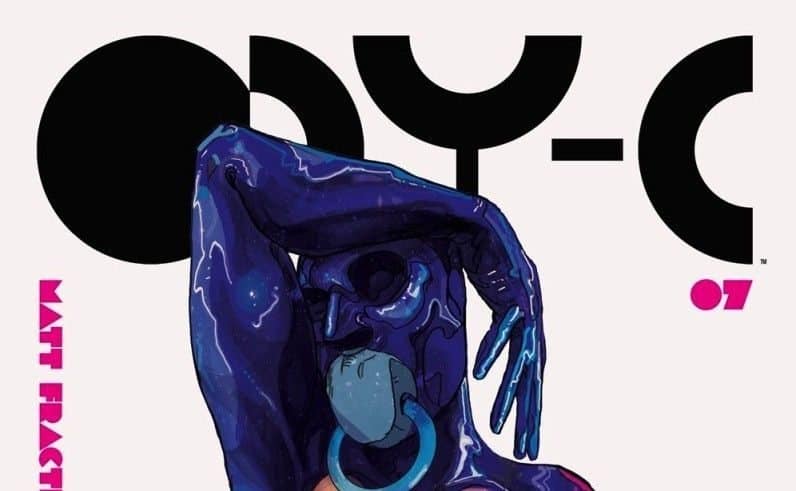 Honestly. There might not be a lot of point in me reviewing the seventh issue of ODY-C. From my previous reviews for this series, it’s been made pretty clear that I’m more than a huge fan of what Matt Fraction and Christian Ward are doing here. That being said, this is an open disclaimer on the level of gushing fangirl that’s about to happen in the following ODY-C #7 review. If you want me to stomp all over some other comic, you’ll just have to suggest a comic I don’t like. Believe me, I wish I had negative things to say about this. But alas, I do not…

So, right to the point, this series still has the ability to wow me with every new issue. I tried to maintain a healthy level of skepticism after the last great issue, but Matt Fraction seems to have a real way of improvising and knowing how much information to disclose at what time. Not only does he continue to incorporate and devise from old school mythologies, but he somehow beautifully makes the story lines overlap and intersect in intriguing ways.

READ: Need a recap? Check out my other reviews on ODY-C!

Last issue we were introduced to He, the Man Whore of Troiia, who was cast out by great queen Ene of Achaean space and the two wolf brother rulers, Zhaman and Hyrar, on the isolated city of Q’af. We have him as our protagonist once again. There are some mentions of Zeus and her Pantheon to remind us of Odyssia’s story line in the first five issues. Not only does this beautifully set up the literal and figurative universe in which Odyssia’s story line and His take place, but it also gives Matt Fraction a chance to creatively stretch his wings, keeping the readers engaged by the world he created with various story lines instead of just one character to commit to. That’s a tough gig, but he sure delivers. 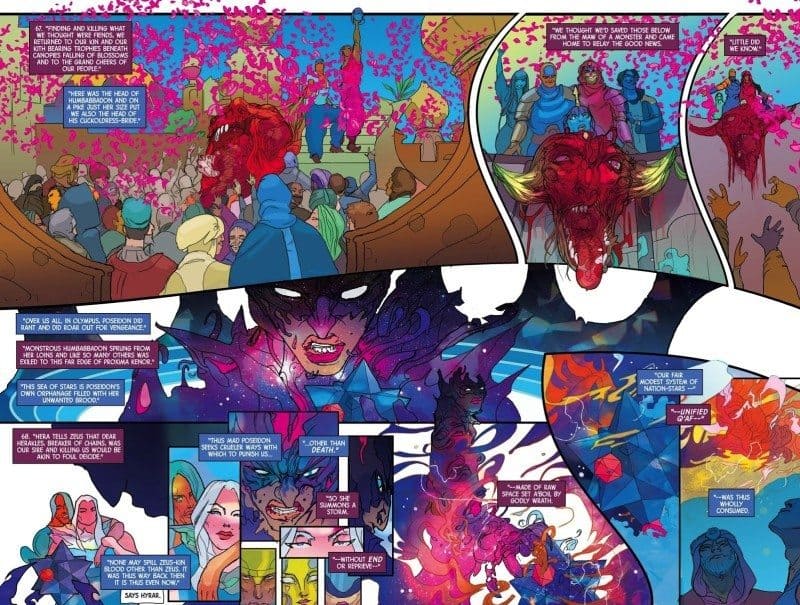 Queen Ene listens to the origin of Q’af, the imprisoned paradise: Zhaman and Hyrar mourning the death of the Wolf of the Woods, The Great Mother of Whores that was taken by Herakles in the story from the last issue. In their grief, they went hunting and brought back the severed head of Humbabbadon and his cuckoldress-bride’s. Little did they know that this creature was of Poseidon’s “unwanted brood” and she sought vengeance (as Gods are wont to do). So Poseidon, Goddess of the Seas of Space, enslaved them with Proteus, the Leviathan, trapping all inhabitants on Q’af. 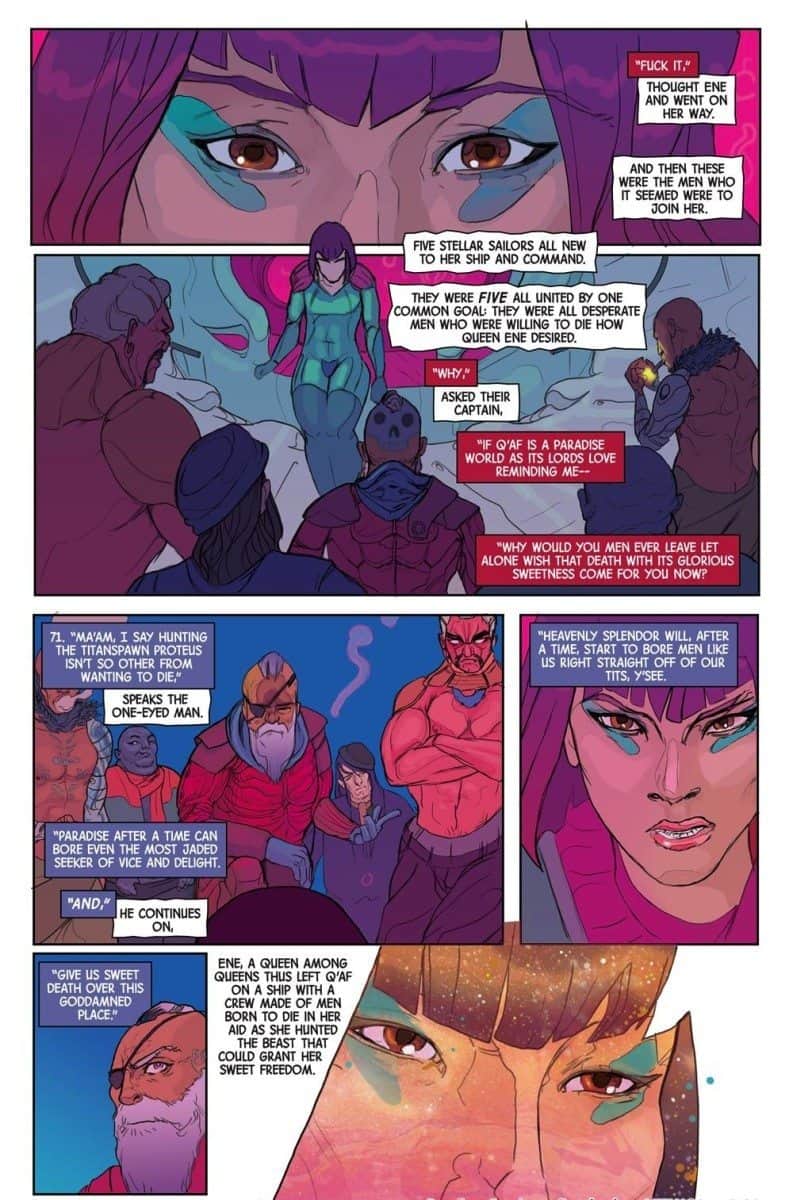 Despite these warnings, Queen Ene takes no heed and still decides to leave Q’af, guiding a new crew of men (which is probably the Moby Dick-like narrative Matt Fraction alluded to in the previous issue). The rest of the issue goes into the separation and reconciliation of the two Sons of the Wolf after their mother’s death.  It also follows He who continues to work in the brothel, where He was once revered and is now ignored. He works and reaches out to a young ward; it would seem that He’s finally found a companion.

READ: Need more “space”? Check out our review of DESCENDER when it came out many moons ago. It’s not too late to hop on!

I’m going to stop here in discussing summary, but Matt Fraction continues to discuss some very important issues through his writing. As I said in the previous issue, not only is he inverting the cultural experience of men and women by placing men in a more sexualized and “exotic” position in ODY-C, but he also shows the gender-less phenomenon of dominion over another person. The themes of rape and taking things that do not belong to you continues on throughout this issue and, in a way, shows no one is safe. There is also an element of commodifying human life, themes of enslavement, lack of care for personal wellbeing, and sacrifice all beautifully translated through Matt Fraction’s mythological narratives as well as Christian Ward’s amazing use of poignant colors and imagery. 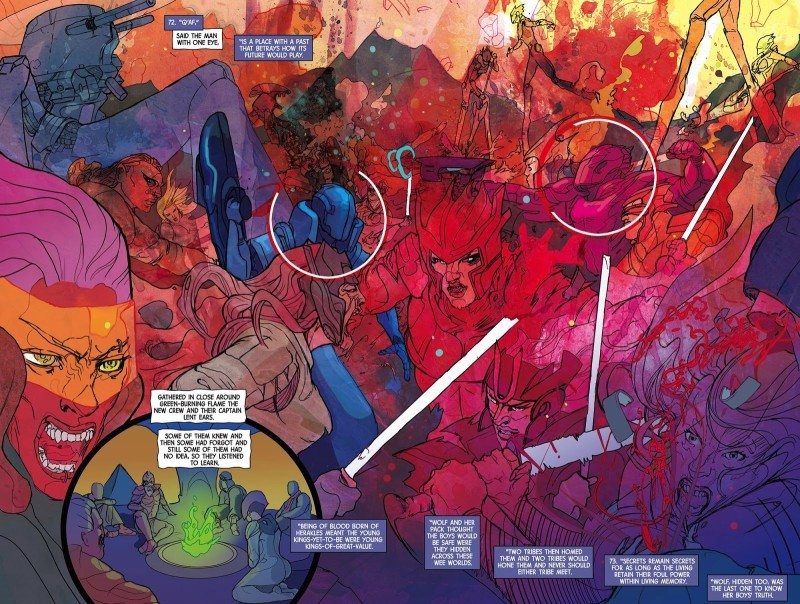 In short, Matt Fraction is able to mold old mythologies with newer ideologies to create something wholly his own. In response, Christian Ward doesn’t falter in exploring new ways to creating art and laying out his panels. If you like Matt Fraction’s work, you’ll find yourself pleasantly challenged here. If you like beautiful things, pick it up just for Christian Ward’s amazing artwork.

Basically, just read it. You won’t regret it.