From a gender-bending, queer interpretation of Odysseus’ travels after the Trojan War in a hallucinogenic sci-fi spacescape, Matt Fraction and Christian Ward take ODY-C to two other narratives: Queens and captains, Mene’s and Gamem’s. In issue twelve, Fraction rounds out the third storyline, “The Fall of the House of Atreus,” outlining the curse in the Atreid bloodline, leading all the way to Gamem, who returns home from war to face death at the hand of her wife, Menstra. Anyone who’s familiar with Greek mythology will have a field day reading this book, but what makes issue twelve stand out is its representation of Fraction’s creative prowess. While the Oresteia, Odyssey, and Iliad serve as the backbone for the storylines explored in ODY-C, as seen in previous issues, Fraction does not shy away from other famous narratives in great literature. In the case of issue twelve, it stands out from not only other comics out now, but also from the issues that preceded it. 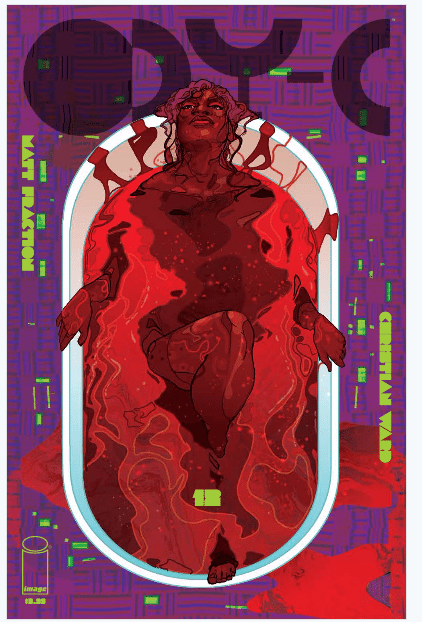 Before I gush about how I can’t get enough of Fraction’s sex-swapped version of famous Greek tales, it’s important to mention that whenever I’m talking about ODY-C as as a series, the names that I mention are creative and unique ways Fraction rewrote famous Greek heroes’ names. For example, instead of the famous male heroes from the Trojan War, Odysseus, Menelaus and Agamemnon, Fraction speaks of three queens from the Troiian War, Odyssia, Mene, and Gamem. If readers have been as devoted as me to this series, they know that Fraction didn’t initially know where ODY-C would take him narratively, starting with the first five issues covering Odyssia’s trek home. Astoundingly, Fraction uses issues six through ten to show the relationship between Queen Ene and He, the Great Man Whore of Troiia; Fraction’s version of the relationship between King Menelaus and Helen of Troy after the war. Issues eleven and twelve to develop the third arc to follow what we know as the Oresteia.

The curse of Atreus is aptly represented by Fraction’s light-hearted writing for the almost laughable perversity and immorality surrounding the Atreus bloodline. Juxtaposing the casual and modern narration, is very rich, hyper-saturated color and content from the very talented Christian Ward. Every page is a masterpiece that’s not only aesthetically pleasing, but thematically plentiful with heavy use of sex, blood, and semen in a sci-fi world in technicolor. Even Fraction’s choice to call Gamem’s wife Menstra (rooted from the Clytemnestra of the Greek myth), shows the symbol of empowerment in not only womanhood but also Menstra’s bloodthirst. In other words, Fraction uses ODY-C as a series to flip the script by having a society of women in charge, dominating other women as well as men. On top of that, in issue twelve, Fraction and Ward do a phenomenal job of thematically building Menstra’s thirst for and eventual dominion over Gamem’s throne. Not only has the theme of blood signified life, death, rebirth, and destruction, but Fraction brings it full circle in issue twelve with Menstra donning a “crown of blood”, and commanding her guards to “bow down to the queen.” As in previous arcs and issues, it is suggested that at the end of it all, the Gods of the Pantheon are to blame for the pain and death the house of Atreus has brought on itself. The twelfth issue culminates in Menstra and Aegis (Aegisthus) reunited, with Menstra overtaking the throne of Atreus. For those who knows what comes next, know that her reign can not last long, even after sending her only heir away.

The way Fraction has taken a classic story and tweaked it in all the right ways in a world simultaneously alike and foreign to the original Greek landscape has kept me reading this series since 2014. Now, almost two years later, issue twelve has brought the series full circle in more ways than one. As stated in previous reviews and analyses, ODY-C is a series that is visually enticing as well as delightfully reminiscent of a college lecture course on Homer’s Odyssey in its literary density. That being said, Fraction has not resisted his individualistic writing style with colloquial quips and bouts of narrative absurdity to highlight just how “trippy” and self-referential the series has become. While the experience has not deterred over time, issue twelve has come a long way from issue one. ODY-C remains the most innovative and stand-out masterpiece in comics today, and no doubt, in history. I can’t wait to see what comes next because, despite it playing parallel to Greek stories we may know well, Fraction and Ward find a way to still surprise you and leave you almost delirious with awe.