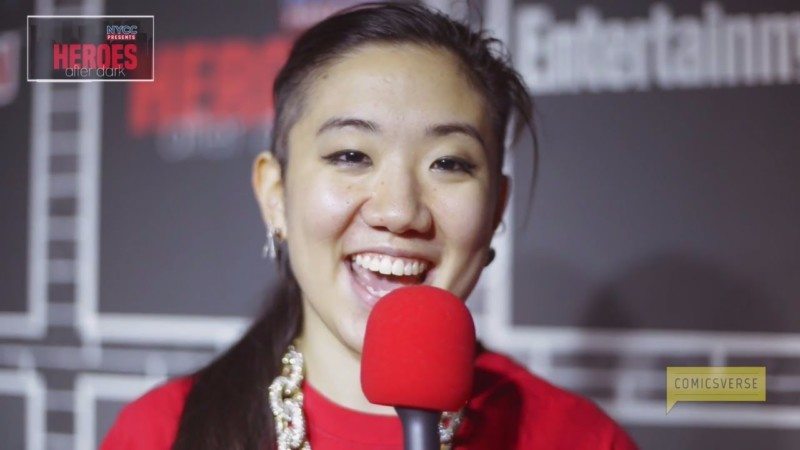 Before the crowds started to fill the Javits Center, before any of the numerous panels spanning Comics, Television and film began, and before any money was spent on the dozens upon dozens of vendors selling their wares at Comic-Con, celebrities gathered for a night-time red carpet event at a small club in the Meat Packing District in downtown New York City. The event, dubbed NYCC Heroes After Dark, was a  We were lucky enough to be able to attend said red carpet, and the party that followed.

READ: Here’s what we had to say about the new AMC show, HUMANS!

On the red carpet, we had the opportunity to speak with celebrities from the worlds of both comics and television. After getting a great intro from Barbara of ROOSTER TEETH, we were able to interview Sophie Hawkins and Vivian Oparah of the new BBC show CLASS. We asked them about what fans should expect from the new DR. WHO spin-off and what their favorite part of the Con was.

After that, we had the opportunity to speak with comic writer Steve Orlando, creator of MIDNIGHTER and contributor to SUPERGIRL and JUSTICE LEAGUE. We asked Steve his thoughts on diversity in comics, and what responsibilities comic creators and writers have to their readers. We then spoke with Jessica Parker Kennedy, of the hit Starz program BLACK SAILS. We asked her about what fans can expect in the final season of BLACK SAILS. We also got the opportunity to speak with Lance Rubin, author of DENTON LITTLE’S DEATH DATE, about his novels and what about New York Comic Con he is looking forward to.

LISTEN: Chrissie Zullo’s interesting fascination with Yeti’s is explored in our awesome NYCC interview with her!

After the red carpet festivities ended, we were able to attend the actual party, being hosted upstairs from the red carpet. Celebrities and fans alike were able to enjoy a night of drinks and entertainment, while a DJ spun hits throughout the night, and a Mr. Monopoly mascot handed out copies of the new Monopoly game.

The event was a fun and intimate affair, where celebrities were able to meet a few of the many NYCC fans and were able to prepare themselves for the chaotic and amazing weekend of New York Comic Con 2016.