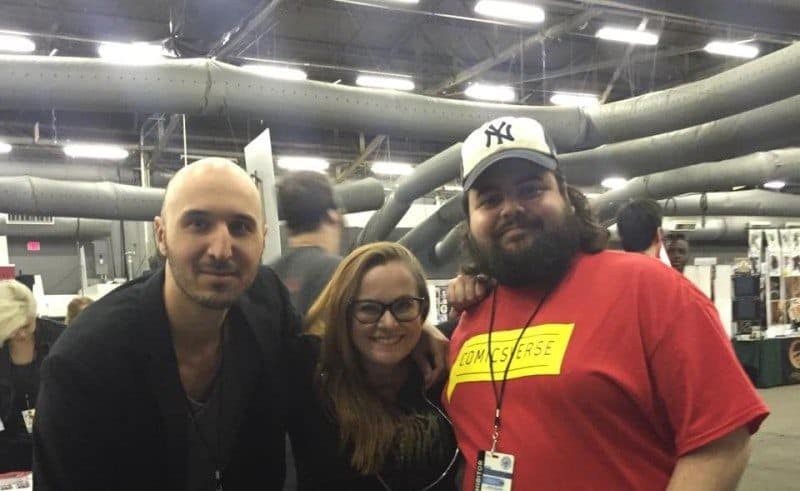 Earlier this month I had the privilege to speak with Becky Cloonan and Karl Kerschl at Special Edition: NYC 2015. In this second and concluding part of our chat, we delve into their other projects, the growing Con-scene, there Montreal studio, and writing for teenage characters.

(Just a quick: All three of us were a bit tired from a long day at the Con and got a little jokey at this point in the interview. Just for clarification purposes I was and am quite aware that Becky Cloonan scripts SOUTHERN CROSS, which incidentally is a series I’d definitely recommend checking out.)

Besides GOTHAM ACADEMY, why don’t we delve into some of the other projects you’ve got going on right now.

Kerschl: It’s like an Agatha Christie mystery in space.

Cloonan: Sometimes it’s weird. I look over at Andy’s desk, cause I can see him from where I am, and I peak over and I have no idea what he’s drawing. I’ve read Karl’s scripts (both laugh) so I know what’s supposed to happen, yet I’m still like “Andy, what the hell are you drawing?”

Kerschl: Like “Andy, you’re really gonna piss off Karl.” (Laughs) We should stop this before your readers, or you get confused. I actually have nothing to do with SOUTHERN CROSS. 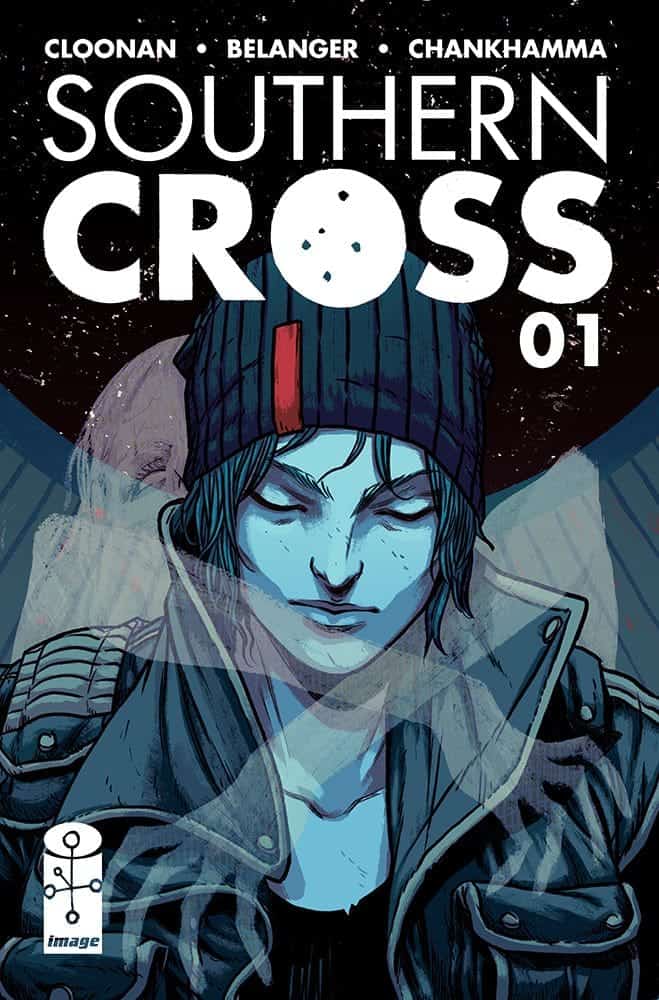 Cloonan: I’m actually the writer. Andy will draw stuff, and Karl will look at him and be like “What the hell are you drawing?” (Laughs) We all share a studio in Montreal, which is actually great. Working with Andy, and Karl, and Brenden (Fletcher, co-writer of GOTHAM ACADEMY) to, everyone is local up there. And even though I’m not Canadian and I’m only there a temporary basis every now and then, it’s invaluable to be able to go out and work with you guys. Even if we’re not doing anything and I just stare at the right side of your face all day it’s a good day.

Kerschl: That is my good side.

Cloonan: To be able to have that kind of camaraderie, we keep each other’s spirits up and weather any storms that come our way, and when good things come it’s fun to go out for lunch together and eat ice cream. We also get to talk and develop the story a lot more. And I think with a book like GOTHAM ACADEMY, the book really shines because of that, because we’re able to have these conversations. I think the fun that we have in general talking about it and developing these ideas gives the book a depth that it wouldn’t have had otherwise. I can’t imagine now working with someone that I don’t see on a day to day basis. When we’re not together, we Skype sometimes, but it’s not the same. We’re like, (to Karl) I’ve been a fan of your art for a really long time.

Cloonan: And when I moved up to Montreal and we met and started hanging out, it was like we’ve been friends since high school.

Kerschl: Yeah, it was weird. When was that, three years ago?

Kerschl: We’ve only known each other the three years, but you really wouldn’t know it.

Cloonan: It feels like forever. And GOTHAM ACADEMY has happened so organically.

Kerschl: (To Becky)  I’m really sad every time you leave.

Cloonan: I do leave frequently. I’m a wanderer, vagabond. (Laughs)

That actually segues nicely into my next question; Do you guys travel from Montreal often for cons? Karl, I know I’ve met you at New York Comic Con before. Becky, I don’t believe I’ve ever met you before this.

Cloonan: Well I used to live in New York before this. Before three years ago, I’d lived in New York for about fourteen years, so I was here for quite a while. Yeah, I do like a boatload of shows. In fact, this year I’ve been cutting down. I might not do New York Comic Con this year. It really depends on if they invite me out. I’ve gotten to the point where I’m like I can’t do shows unless I’m invited out. So many shows are vying for my affection (Laughs) and I mostly do the same shows every year, because I love them, but it’s come to a point that I have to give some other shows a chance. I did Denver-Con, who’ve been asking me for a few years, for the first time this year. It was a lot of fun and those guys were great. It’s hard. And you’re also taken away from your work. But, at the same time you leave, and you feel like energized. And You’ll have conversations that will make you think about things. And actually, this is one of the rare shows that Brenden, Karl, and me are all here at the same time, cause usually I’m alone.

Kerschl: Actually we organized our own tour when GOTHAM ACADEMY #1 came out, and we just travelled around to different shows and stores.

Cloonan: Two weeks before New York Comic Con we left. We had an epic party in Montreal. We rented a bar and had a DJ and everything, packed the place.

Cloonan: People were buying us shots while we were signing. It was insane. 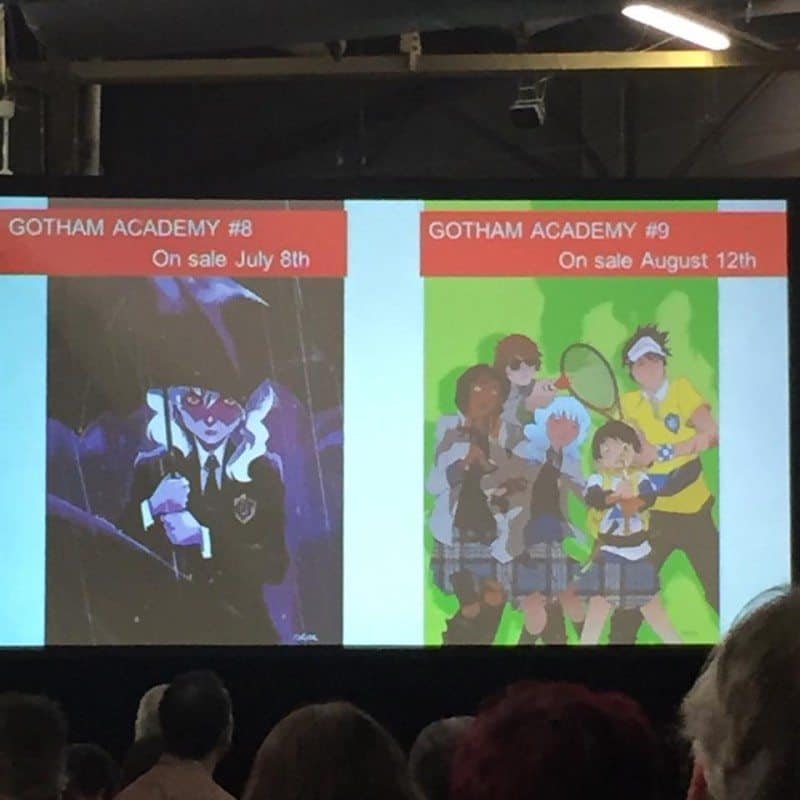 You guys are tempting me to come to Montreal.

Kerschl: I wonder if we can get people from out of town to come more often.

Cloonan: Montreal does have a comic-con. A bunch actually. Some are French. I don’t necessarily know if it’s one that’s worth traveling to, which sucks because there are so many great artists in the scene.

Cloonan: They don’t even have panels though. It’s gotten better, but it’s not the kind of show that’s artists first. It’s more like a flea market, which is good and bad. A lot of collectibles. They also have a lot of Hollywood guests, a lot of STAR TREK people and wrestlers and stuff. It’s fun in it’s way. But like this is the first Special Edition: NYC 2015 that I’ve done, and it’s all comics. This is how I want comic conventions to be. All artist-centric.

Since a lot of our site is dedicated to comic book theory and philosophy, I always try to work in philosophical question if at all possible. Obviously GOTHAM ACADEMY, and some of the other work you guys have been involved in, centers on young characters in “modern times.” How do you go about staying connected with characters who are supposed to be pre-teens. I personally love the book because it feels so authentic, which is missing in modern comics. Often times pre-teen or  teenage characters don’t speak like teenagers, or dress like them. I’m curious as to how you guys stay in touch with that?

Kerschl: That period of someones life is pretty universal, so it really comes down to just knowing your characters inside and out and knowing how they’d behave in any situation and respecting that. Not writing them for a situation, but being true to themselves and who they are.  I think that that transcends any age or genre, and that’s why I think it feels honest to you.

Cloonan: We try and treat our characters like people. I never think of them in terms of what a teen would say.

Kerschl: Never. Not slang or anything.

Cloonan: Even all the slang, we kind of just make it up.

Kerschl: We make up slang that we think is funny.

Cloonan: We’ll use it in the studio and I’ll think “Oh Pomaline’s gonna use that in the next issue.” Mostly it’s just in-jokes and things we think are funny. A lot of it is just respecting the characters, and like Karl was saying it’s a universal thing. Everyone was a teenager at one point. I still remember what it was like, and I had a lot of good friends growing up. Olive and Maps’ dynamic is, when I was thinking of the two characters when we were first starting out, whenever I thought of them I thought of me and one of my best friends Jen. We didn’t have the same dynamic, but it was parallel to theres, and there relationship was kind of inspired by the feelings I have when I think of it. Also, in GOTHAM ACADEMY we don’t actually use much technology in it. We keep it tech-lite. There’s no pop culture references, and if they’re are it’s kind of retro. 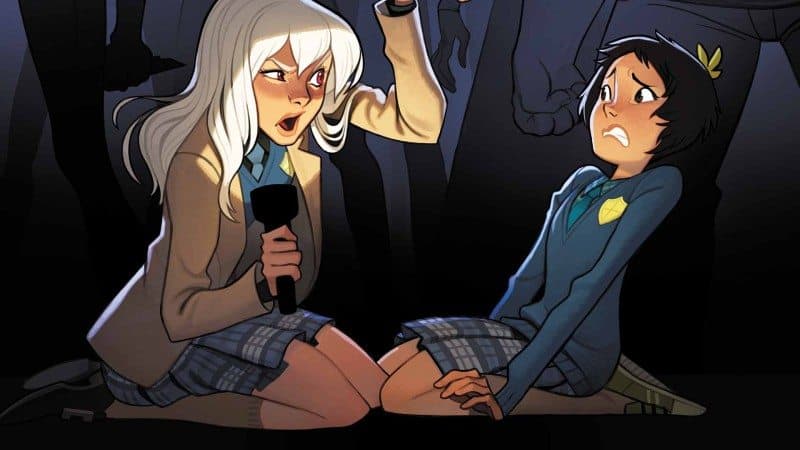 Cloonan: Yeah. I think in ten years people can pick this book up, and because they’re wearing school uniforms it’ll be kind of timeless. I think we’ve been able to protect this book in a little bubble from the rest of time, and I think that will help it stand on it’s own when there is no Facebook. When Facebook is the new Myspace and no one remembers these things, anything that references this stuff will be heavily dated, so we just want to keep it out of what we’re doing. It wouldn’t fit anyway. We have a very highly curated universe that we’re creating with GOTHAM ACADEMY.

Kerschl: We also have on our side that these kids are in high school, so they feel every emotion acutely. They feel everything that happens to them is the most important thing in the world, and knowing that we can play into that. Depicting how that act or react is really good drama. An adult behaving that way would be melodrama, but because they’re teenagers it would be accurate.

Cloonan: I know a lot of adults who still act like teenagers anyway. (Both Laugh)

Well thank you guys so much for your time, it was so awesome to speak with you.