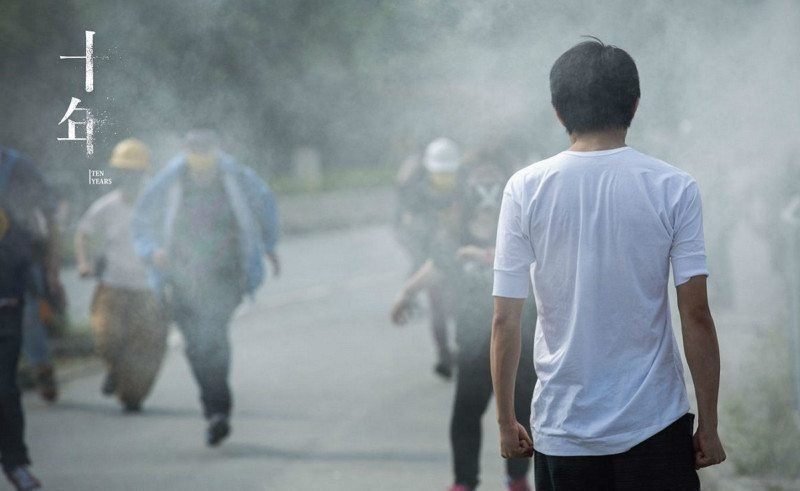 TEN YEARS might be the most important film that screened at the 2016 New York Asian Film Festival. TEN YEARS is an anthology film made up of five short films that imagine what Hong Kong will be like ten years into the future. The simple conceit of the film inspired its five directors to create dystopian tales of political corruption, loss of cultural identity, and political revolution. Each of these five films has its own distinct style and voice, but blend together thematically in a nearly flawless way.

As a born and raised American, who has really only experiences Chinese culture through reading and films, watching the film TEN YEARS was something of a surreal experience. The film screened in America for the first time on July 4th (which really only added to the surreal nature of the screening). I saw reflections of my own American culture in the film’s disturbing tales, which made me realize that I couldn’t imagine how I would feel if this film was directly addressing my own home. After the film was over, a fellow audience member, who had family living in Hong Kong, asked me how I had even heard of the film. Considering the infamous nature of the film, his question was a fair one.

TEN YEARS started out playing in one theater, opening on December 15th against a little American film called STAR WARS: THE FORCE AWAKENS. At that one theater, TEN YEARS consistently sold out and outperformed the box office for STAR WARS, an accomplishment that makes David and Goliath look like a schoolyard slap fight.  Due to the film’s intensely pointed commentary towards the Chinese central government, the film was publicly rebuked by the Chinese government. But as the old showbiz saying goes: there’s no such thing as bad publicity. The film would go on to win the award for Best Picture at the 35th Hong Kong film awards. The victory, however, was somewhat bittersweet as the Chinese government refused to broadcast the ceremony.

CLICK: Want more reviews from NYAFF? Check out our reviews of THE THRONE and DONGJU

Despite the Chinese government’s attempts to discredit the film as a “thought virus,” the film has endured. The film’s presence at this year’s NYAFF, its public community screenings, and its upcoming DVD release in Hong Kong are evidence of its resilience. But for all of its political turmoil, does TEN YEARS function as a film? Unequivocally, yes. TEN YEARS may, in fact, be film-for-film, one of the best anthology movies ever released. 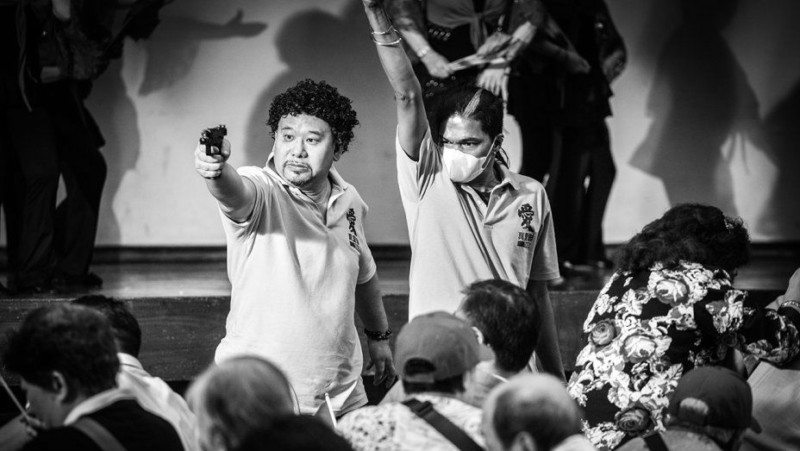 “Extras” is one of the two most overtly political films in TEN YEARS. The premise centers around two incompetent assassins who are being paid by government officials to attack a pair of politicians. The assassination is all a ruse to drum up support for a National Security Law (presumably the same law that was proposed, but not passed, in Hong Kong back in 2003). Kwok Zune films this short in stark black and white, as if to emphasis the lack of moral complexity that has made its way into China’s politics. The film’s implications of a Hong Kong puppet political system are dark, but the script maintains a tone akin to DR. STRANGELOVE, a dark political satire that is funny because it seems a little too close to the truth. It’s worth stating again that this film can be very funny at times. “Extras” manages to set the tone for many of the other shorts that are equal parts intellectually engaging and funny. The tragedy of this first short is the way fear of outsiders is used to manipulate the populace. When the assassination occurs, the event is immediately declared to have been a terrorist act. Ultimately, the most unsettling thing about this short is the way media manipulation appears to be a worldwide phenomenon.

SEASONS OF THE END (Directed by Wong Fai-Pang)

“Seasons of the End” is the most experimental and abstract of all of the films, but that’s part of what makes it the most memorable. Wong Fai-Pang fills the screen with lush imagery of a world that is quite literally falling apart. This short focuses on a couple, Wong Ching and Lau Ho-Chi (both actors playing characters named after themselves), who are collecting mundane items to record them as scientific samples. A scathing commentary on Hong Kong’s rapid development, the sample collecting is an allegory for trying to preserve the past; a heritage that is being shoved aside for the new age of “progress.” The film follows a surreal dream-logic that can be off-putting, but for audiences willing to engage in the story, its conclusion is tragic and moving. It’s a vital reminder not to let the constant forward momentum of progress leave the memories of the past behind.

WATCH: Check out our interview with directing legend Lee Joon-ik from NYAFF

“Dialects” is easily the most accessible of all five films in TEN YEARS. Its placement in the film is perfect and provides a much-needed breath of comedy after the heavy subject matter of “Seasons of the End.” “Dialects” is centered on a cab driver (Leung Kin-ping) who speaks the Cantonese dialect of Chinese. In this short, director Jevan Au Man-Kit targets the Chinese central government’s attempts to make the Mandarin dialect the primary Chinese language. The short has its own episodic structure revolving around the cab driver trying to adapt his language to the new Mandarin style. It’s a comedy of errors as he encounters people who ridicule his lack of Mandarin understanding as well as people who would much rather stick with traditional Cantonese. This small comedic story beautifully conveys the loss of cultural identity that the filmmakers fear is happening in Hong Kong. While “Dialects” is comedic throughout, it’s hard to deny the tragedy of the cab driver’s realization that he can no longer understand his Mandarin speaking son. 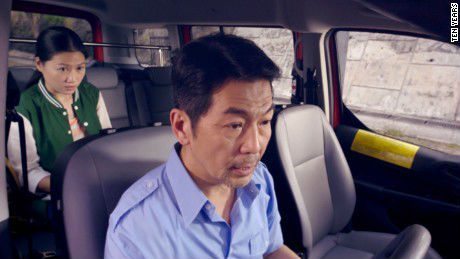 Here TEN YEARS begins to move into what the directors clearly believe is the greatest struggle for Hong Kong: the generational divide. The Chinese central government’s control over Hong Kong is recent, so there are many who fight to maintain the city’s independence, but the longer the central government maintains control, the more likely younger generations will acquiesce to the increasingly strict demands of mainland China.

This fear of complacency is most explicitly expressed in “Self-Immolator.” Along with “Extras,” “Self-Immolator” never tries to hide its politics, but it is also the film that provided the greatest emotional reaction from the audience. Chow Kuan Wai mixes a faux documentary with a traditional narrative style in order to give a history of Hong Kong’s transition from British to Chinese control. The dual styles are also used to tell the story of fictional activist Au-yeung Kin-fung via flashbacks and documentary news footage. In addition to the story of the activist, the film cuts to numerous talking heads discussing whether Hong Kong should declare its independence after someone has committed self-immolation outside the British consulate.

The short film’s documentary style is effective in contextualizing the political aspects of the story. For a viewer who lives outside of Hong Kong, it’s a useful crash course. But the director’s intent was likely to remind younger viewers of Hong Kong’s history and what the changes to the city mean for its evolution. The reveal of the identity of the self-immolator is deeply moving and reinforces the theme of generational responsibilities for Hong Kong’s independence. It’s a tragic ending, but it is one that gives the film its first glimmer of belief that people living in Hong Kong will still stand-up for the values that the directors believe are being lost. 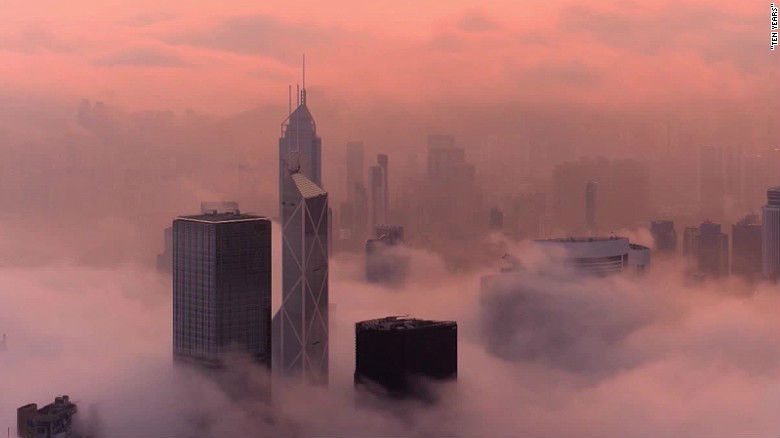 CLICK: For more great NYAFF films, check out our reviews of SAVING MR. WU and HAMOG

The final short is also the most hopeful one, despite opening with a bleak prediction of the last chicken farm in Hong Kong closing for good. “Local Egg” centers on Sam (Liu Kai-chi), a grocery store owner, who observes the identity of Hong Kong being devoured even on a micro-level by Chinese nationalism. The idea of a “local” egg suggests a level of independence for Hong Kong that is deemed inappropriate by the Chinese youth guard—a group of children dressed both farcically and chillingly as tiny Mao Zedongs—who go from store to store to find words on the “censor” list. The purpose is not to impose any sort of law on the shop owners, but to reinforce the preferred beliefs of the Chinese government in the minds of the youth. The image is ridiculous, but it is a perfect encapsulation on the effect the new order of Hong Kong is having on its youngest citizens.

Despite this pessimism about the youth, “Local Egg” injects a message of optimism in the form of a contraband bookstore that Sam’s son frequently visits. These small acts of rebellion may seem insignificant, but much like the film TEN YEARS, they can have a ripple effect down through the generations to bring about real change.

TEN YEARS is equal parts a statement of protest and an example of cinema’s power to speak across languages, boundaries, continents, and oceans to show the injustices of the world that we all experience, or may not even realize are happening. There’s an old cliché in storytelling: show, don’t tell. TEN YEARS shows the fears and hopes of a population in a way that is imaginative, funny, unsettling, hopeful, and poignant. The film’s final words that fade onto the screen are “Already too late.” These words fade away and become “Never too late.” As long as there are artists, like these five directors, who can pick up their tool of creation and share their stories with the world, change will never come too late.