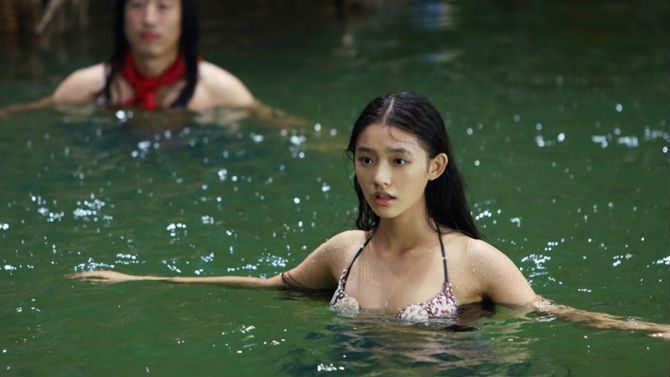 A good genre film should be equal parts entertaining and meaningful. The monsters, gangsters, or fairytale creatures present should provide us with an escape, but still tell us something important about the world we left behind when we walked through the doors of the movie theater. The New York Asian Film Festival (NYAFF) provided us with two such films this year. From China, Stephen Chow’s gonzo comedy THE MERMAID is a cartoonish love story with an environmental message. INSIDE MEN from South Korea is a gripping crime drama that emphasizes the importance of standing for justice even if it requires great personal sacrifice.

How to describe a film like THE MERMAID? Like most of Stephen Chow’s films, realism hasn’t been checked at the door so much as blown up with an ACME dynamite kit and shot into the stratosphere with an oversized canon. THE MERMAID continues Chow’s signature style of live action cartoons. The film is a wonder to look at, with vibrant colors that suit the cartoonish tone. Beyond visuals, the action of the scenes moves at a brisk pace, pausing only for quick sight gags and goofy asides. Despite the insanity, Chow manages to keep a purposeful chaos to each scene, never letting the zaniness overshadow the characters.

CLICK: Check out more of our coverage of the New York Asian Film Festival!

THE MERMAID takes the trappings of a typical boy-meets-girl plot and seamlessly attaches it to a story about a mermaid named Shan (Lin Yun) who who acts as bait in a “honey trap” plot to assassinate Liu Xuan (Deng Chao), the billionaire tycoon whose latest real estate development project threatens the merfolk’s underwater home. Of course, Shan and Liu find that they share a connection and begin to fall in love. As Shan questions her mission, Liu begins to question his company’s ecologically destructive methods of development.

Chow’s comedic direction in THE MERMAID is as effortless as ever. He has mastered the art of humor through obstacles, escalating each moment of physical comedy with new and unexpected beats. A sequence involving Shan’s first attempt at assassination is particular standout,worthy of THE THREE STOOGES, with each attempted attack resulting in hilarious misfortune.

Chow is consistently able to find actors who adapt perfectly to his absurdist style, but THE MERMAID may be his best ensemble of actors. Each of the actors understands how to go big and broad with their performance without betraying the essential truth to their characters. The humor comes from getting the funniest in-character reaction, not through random non-sequitors. Deng Chao is one cowboy hat away from playing Yosemitie Sam, but he invests Liu Xuan with a level of likability that leaves the audience rooting for his change of heart. Equally entertaining is Octopus (Show Luo), the leader of the merfolk who carries himself with clueless bluster and perfect execution of Chow’s comedic set pieces. All of this comedic talent is overshadowed, however, by newcomer Lin Yun’s powerhouse performance as Shan. Yun is side splittingly funny as the hapless mermaid assassin. Yun’s unabashed commitment to foolish slapstick puts her turn as Shan in canon of great first-time comedic performances. She is undoubtedly a talent to watch out for.

The comedy carries itself consistently throughout the film, but the sudden switch to the serious subject matter of ocean preservation is almost too extreme. Chow clearly feels strongly about the destruction of the ocean’s ecosystem that China, and other countries, have been culpable for. Throughout the film, he inserts images that show the real-world consequences of humanities flagrant destruction of the ocean. These small acknowledgements of real-life atrocities are effective enough to make the film’s allegorical point clear to the audience.

WATCH: Check out our interview with filmmakers Lee Joon-ik and Shin Yeon-shick from NYAFF

However, when Chow tries to bring this pressing real world issue into the third act climax, the film’s tone moves in an unpleasant direction. When Liu’s sinister business partner Ruo Lan (played with great villainous aplomb by Zhang Yuqi) discovers the presence of the mermaids in their development area, she orders them executed. The scenes of Shan’s mermaid brothers and sisters being mowed down in violent fashion is disturbing and clashes with the light comedy that the film has maintained through its run time. The film ends happily, with Liu realizing his mistakes and rescuing Shan, but the upbeat ending only further emphasizes how oddness of the violence that came before. This shift is especially jarring when you consider Chow’s customary mastery of tone. But with the urgency of his message, can anyone blame him for his lack of subtlety? Ultimately, THE MERMAID is an incredibly fun film that wears its fishy heart on its sleeve, so perhaps understatement can’t really be expected.

Calling to mind elements from classic undercover epics like THE DEPARTED, INSIDE MEN is a crime drama with a maze-like structure and interesting characters. The film centers around Lee Kang-hee (Baek Yoon-sik) a newspaper editor, Ahn Sang-goo (Lee Byung-hun) a low-level gangster, and Woo Jang-hoon (Jo Seung-woo) a world-weary prosecutor. While the film doesn’t reach the heights of its crime movie predecessors, the unique characters and perspectives give the film a different flavoring that elevates the film’s other, somewhat more predictable plot elements.

Director and screenwriter Woo Min-ho manages to bring out great performances from each of his trio of actors. Baek Yoon-sik is hypnotic as the corrupt journalist who uses the power of the press to push crooked politician Jang Pil-woo (Lee Geung-young) to prominence. Baek’s trademark stoicism fits perfectly into this film where motives and loyalties are constantly being questioned. On his trail is Prosecutor Woo Jang-hoon who is slowly losing his passion for justice as he is constantly overlooked for career advancement in favor of people with more political connections. Jo Seung-woo’s performance as Woo Jang-ho perfectly balances the frustration and dedication Woo Jang-ho feels, which helps him to perfectly sell a twist in the film’s final act.

Finally, we have another rousing performance from Lee Byung-hun as one-handed gangster Ahn Song-goo. Lee injects the gangster with so much personality that he becomes magnetic to watch. Both Lee and director Woo Min-ho give the character great off-kilter bits of comedy, like Ahn’s introduction to the film where he is seen wearing an orthopedic neck pillow on his shoulders, immediately undercutting his gangster menace.

CLICK: Be sure to check out our continuing coverage of the 2016 New York Asian Film Festival

Despite these great performances, the film ultimately leaves something to be desired in its standard story. The film follows a fairly typical corruption scandal structure and rarely moves away from plot beats that are expected. It’s a well structured film, but doesn’t necessarily give audiences anything they haven’t seen before. Where it does shine, however, is its injection of unique characters into the story. Instead of the standard cops and robbers fare, we get a battle between the power of the press against a gangster and a prosecutor who have more in common than they may care to admit.

The film’s heart lies in the begrudging respect that the characters Ahn and Woo build for each other as they work towards their common goal. Rather than the typical straight-laced law man teamed with a wild criminal, Prosecutor Woo is slowly becoming cynical towards the system he works in. This uncertainty provides some great drama and character moments where Woo and Ahn see that they have both become victims of a system that values nepotism over meritocracy. These two arcs are the heart and soul of the film. The story of people who find purpose in the fight against corruption is a profound one, especially in a time where faith in our governmental systems seems to be at an all time low.

While it may not reinvent the conspiracy thriller, INSIDE MEN does provide it with some new perspective and fresh coat of paint. This innovation, along with a great cast of performances, and a terrific theme makes INSIDE MEN a film worth checking out, especially for fans of the crime genre.