Film festivals like NYAFF are an opportunity to expect the unexpected. Two films that really have the opportunity to catch audiences off guard are the HONOR THY FATHER and THE BOYS WHO CRIED WOLF. Both films draw in audiences with an intriguing thriller hook and use this drama to tell a character-focused story. Rather than using a standard crime or mystery formula, both of these films put characters first. The use of genre trappings becomes a set dressing to give narrative propulsion to two films that are ostensibly character studies. 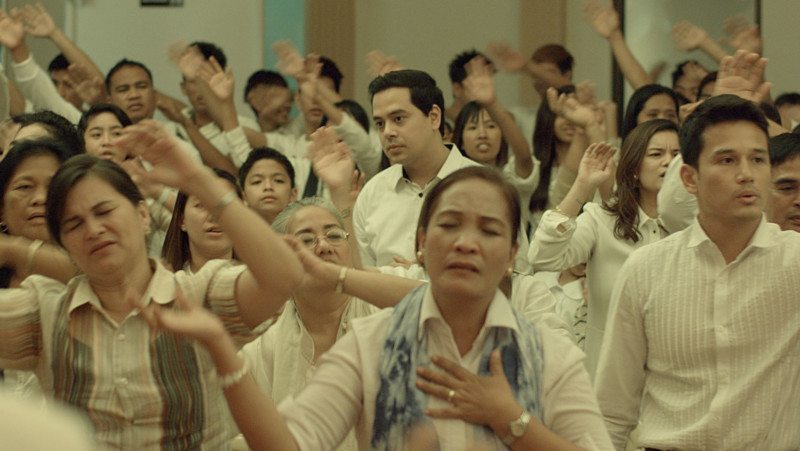 HONOR THY FATHER is a Filipino film centered around Edgar (John Lloyd Cruz) whose upper middle-class lifestyle is built on a criminal history. Edgar’s wife, Kaye (Meryll Soriano), has fallen into a mega church and has been asking people for donations to support the church’s growth. Much like in America, these mega churches are essentially legal scams that take advantage of people’s faith to wring huge sums of money out of them, often promising money in return for their investment. When Kaye’s father, who was a collecting most of the donations, turns up dead, the parishioners demand their money back. Kaye is kidnapped unless the money can be delivered, forcing Edgar to return to his criminal past.

CLICK: Check out our NYAFF reviews of TWISTED JUSTICE and SHE REMEMBERS, HE FORGETS

The megachurch phenomenon is a great jumping off point for a story of this type and director Erik Matti and screenwriter Michiko Yamamaoto use the concept to put Edgar through a Job-like struggle where he has to sacrifice his established life of legitimacy and dust off his safe-cracking skills to protect his family. In fact, the best way to describe a lot of the film is “good jumping off point,” but doesn’t go much further. There are many ideas and concepts that give the film an interesting structure, but often fail in the execution. For example, the plot hinges on Edgar, a former criminal, allowing his wife to get involved in what is obviously a massive scheme. It seems out of character for Edgar, who shows himself to be a very smart and adept thief later in the film, to not immediately stop his wife from getting involved. It’s a nitpick, and maybe not a valid one that deserves to stand as a strike against the film, but it’s hard to ignore as a moment of fridge logic that sticks with you throughout the runtime.

Focusing on the things that do work in the film, the character of Edgar is a wonderful creation. The criminal trying to go straight is a tired cliché, so it’s refreshing to be dropped into a story where the criminal already succeeded in going straight and has built an idyllic life for himself. John Lloyd Cruz’s performance as Edgar is hypnotic. He seems to be holding back a quiet rage for most of the film. He remains passive through so many events that when he finally unleashes his anger on the people who took his wife it is genuinely shocking. Credit should also go to Matti and Yamamaoto who inject Edgar with enough pathos to make him genuinely likable and sympathetic. The scenes in which Edgar returns to his family, who are revealed to also be his heist crew, are particularly entertaining and emblematic of the film’s strength. The idea of a family of bank robbers is genuinely fun, but also colors the importance of family to Edgar and how much he gave up for a life of legitimacy.

CLICK: For more NYAFF, check out our reviews of THE MERMAID and INSIDE MEN

In addition to the strong character work, Matti’s strong visual eye brings further depth to the film. The colors are desaturated and the shadows are strong, matching the dark tones of the story. Matti also frames the film’s set pieces, such as the final desperate heist, without any Hollywood frills. This stripped down style gives these sequences a level of verisimilitude that ratchets up the tension as Edgar and his brothers struggle against time to pull off the robbery.

It’s a disappointment that after such a well done sequence, the film stumbles a bit with its ending. It’s a conclusion that is borderline nihilistic, and likely won’t provide a satisfying conclusion to every audience member. If you’re looking for a perfectly executed bank heist thriller, this may not be the film for you, but if you’re looking a character study with some Old Testament values, this will be an enjoyable flick to catch.

It’s almost too perfect that THE BOYS WHO CRIED WOLF opens with the protagonist Wan-joo (Park Jong-hwan) auditioning for Arthur Miller’s THE CRUCIBLE. Wan-joo is a struggling actor who has taken a job as, essentially, a male escort. He poses as a boyfriend for lonely women, or as a wingman for sad-sack men who need someone to help them socialize. Eventually, Wan-joo is approached with a lucrative acting job: faking a murder witness report. Much like Abigail Williams in THE CRUCIBLE, Wan-joo gives false testimony, and THE BOYS WHO CRIED WOLF also shares Miller’s interests in the dissolution of dreams and the meaning of justice and injustice.

THE BOYS WHO CRIED WOLF comes from first-time writer/director Kim Jin-hwang who completed the film as his graduate project for the Korean Academy of Film Arts. Hearing this might bring up terrible reminders of amateur film projects, but THE BOYS WHO CRIED WOLF is a taut thriller with a dedication to character work. Kim gives Wan-joo’s artistic struggles a level of authenticity that are likely drawn from his own worries and challenges in creating art. This character drama built inside a mystery thriller shows Kim’s unique voice as a filmmaker.

WATCH: Check out our NYAFF interview with directors Lee Jook-ik and Shin Yeon-shick

The mystery itself is rather Hitchcockian. As Wan-joo learns that the killer is the son of a friendly neighbor, he takes it upon himself to learn why he was hired to lie to the police in the first place. What follows is a series of reveals that keeps the audience guessing as to what will happen next. Kim does a masterful job of making the audience feel as overwhelmed as Wan-joo by each revelation. Ultimately, the mystery resolves not with a dramatic climax, but with a very human confrontation between Wan-joo and the people responsible for the conspiracy. Rather than go for a violent catharsis, Kim lets the characters find meaning in quiet revelations about the value of truth.

If there’s any criticism to be had in the film, it’s that Kim lets some elements of the plot remain open-ended to focus more on Wan-joo’s character arc. Considering the great balance between mystery and character drama the film has shown up to this point, the lack of conclusion on this particular plot detail can almost be forgiven, but it will likely be a sticking point for viewers who enjoy thrillers wrapped up in nice bow. THE BOYS WHO CRIED WOLF may not be completely perfect, but it shows immense promise from an exciting new talent in filmmaking.