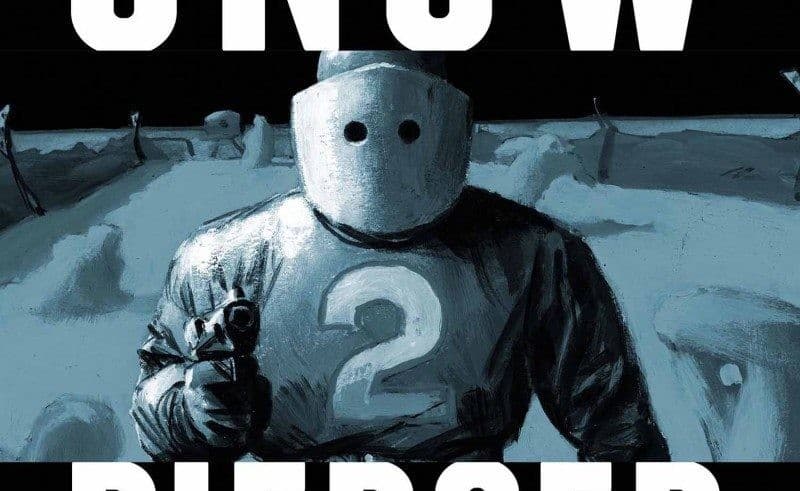 The world is a dark and cold place, covered in layer after layer of ice. Each day, the temperature drops a little bit lower. Who knows the last time the sun was seen? Speeding through this frosty landscape is one locomotive, crushing all the ice in its path. This is the Snowpiercer, and it carries the final few humans that remain on planet Earth.

Such is the set-up for SNOWPIERCER Volume 2, for readers who are unfamiliar with the title. The story was actually made into a movie starring Chris Evans and Tilda Swinton, and directed by Bong Joon-ho, which will soon see US release.

However, as comic fans will recognize, not every movie adapted from a comic book is good, and not every comic book deserves a movie adaptation. So, the question then to ask is: where does this book lie? It’s a difficult question to answer, because there are many reasons that Volume 2 could flop, and a few important reasons it could rise and shine.

To begin with, let’s highlight a couple of the things this book has going for it. The concept, which we are immediately confronted with, takes an overplayed dystopian post-apocalyptic feel and puts a whole new twist on it. No longer is our imperfect world set in a sprawling megacity populated by criminals of the worst kind. In Snowpiercer, our entire world is a 1000-car long train, populated by normal people. In this normalcy, we see reflected an image of our own modern society–there are the upper-class who manipulate society from behind closed doors, and there are the lower-class, who get manipulated. Similar tropes from 1984 are pulled–a lottery game which distracts the masses, a distrust for those in power, conspiracy theories abound (one character, who may initially be mistaken for another bit of exposition, believes quite fervently that the train is actually a spaceship).

The world that has been created functions well and is easy to put yourself into. It’s not so far removed from society as to be unbelievable, but stretches our own levels of comfort and challenges what we define as human. Truly, ambiguity is a major theme of this work- the main quest that our hero is on turns out to be an illustration of existentialism at its most base form. In the end, we all have to question, is any of this worth it? Are the actions the characters take pointless and destined to inevitable failure? It’s a difficult question to answer.

Visually, the book is stunning. It’s in mostly black and white, which helps to identify the divide between upper-class and lower-class. Though the major conflict is person vs nature (or perhaps person vs society), we can immediately recognize the barriers between classes–the elite rule absolutely, keeping secrets from an ignorant mass of workers. The style of the illustrations also contributes thematically to the book–there’s a flow in the painted panels that demonstrates how easily a black and white situation can transform into a shade of grey. Really, that is the core of the book- how quick a right/wrong situation can become an ambiguous problem with no real solution.

Is this masterful or lazy? Could the author have ended it in a better way? This question could be argued forever, with both sides having legitimacy to their opinions, but that is the nature of the argument- it’s all opinion.

I believe that this ending fits the book. To have ended on a less ambiguous, less existential note would have ruined the set-up. The book is a work of art. It’s not a pop read for a kid with a candy bar and a soda walking out of the thrift store. This is a book for the grown-up reader who wants to think about what he’s read and reflect on what it means for his own life. It should be read as such.

What does this mean for a movie adaptation?

To begin with, we have to think about the visual nature of both mediums. Can the movie be effective if portrayed in black and white? Can it hold the attention of the audience without color? I think this is the first of many necessary compromises. It’s not uncommon to stick to neutral colors in the palate of movies typical of this genre. Think about Equilibrium and 1984–both dystopian futures, and both mostly represented with black, white, and grey. A similar visual design could work well for Snowpiercer.

Where we run into problems is with the story and the writing. Can Hollywood allow for a depressing, existential ending in which everything is meaningless? Probably not, and there is where the compromises stop being compromises and become changes. Hollywood will probably slap a happy ending onto the movie, which would ultimately undo the relevancy of the plot and action leading up to the finale.

Not that the book doesn’t require some editing and rewriting in the first place. There are many moments throughout the book where action seemed to be missing. I felt like I’d missed an entire romantic relationship begin and blossom, and next thing I know, two characters were married. I believe things like this are due to the difficulties with translating the original text, which was originally French. Whatever the reason, it made it difficult to follow the details. The overall plot was easy enough, but I know I missed a LOT of what was going on. More than one reading is recommended, if not required.

Whether or not the movie do the book justice remains to be seen. However, the book, with its complex ambiguity and existential ending, certainly offers a challenge to the cast and crew who attempted to pull it off. As a book, I’d give this one about a 6 or 7 out of 10. Though I love the dystopian and post-apocalyptic genres, this book felt underdeveloped. Many ideas were present and left unexplored (which seems contradictory, since Volume 2 is called The Explorers). Beyond the lack of detailed development, the translation simply must have cut out important points. Either that, or there’s a lot of stuff happening off-page, and the hints as to these events were far too subtle.

Catch the movie if you’d like to. I’d read the book if it’s your genre. Superhero fans will probably want to let this one go, but fans of literature, especially sci-fi, dystopia, and post-apocalypto will probably appreciate the story.