Remember when Facebook added a new feature that took you down memory lane by showing you old pictures and status updates from your past? Remember all the times you cringed at the things you thought were cool at the time? Take those mixed feelings about your former self and apply it to a book you used to love. That is pretty much my feelings about the SWORD OF TRUTH series by Terry Goodkind. My teenage self was too blinded by the magic and high fantasy to notice anything problematic and I re-read the series to recapture what I thought was a good series. But somewhere down the line, feminist magnifiers with +20 criticism replaced my nostalgia glasses and I noticed just how sexist this series was.

The first book of the series, WIZARD’S FIRST RULE, follows Richard Cypher and Kahlan Amnell as they journey across the Midlands to stop Darkhen Rahl from unleashing the Underworld. The conflict within this book gets resolved and can be treated as a standalone book without having to read the later books where everything goes out the window.

In the second book of the series, STONE OF TEARS, we get a glaring example of sexism when the concepts of magic are being explained to Richard. In this universe, male magic users are Wizards whilst women spell casters are referred to as Sorceresses. Pretty standard terminology. The problems begin when it is explained that Wizards will always have greater raw magical power than a Sorceress. Sorry Hermione, but Harry is naturally gifted in this universe and you will never surpass him.

It is never explained why Wizards have more power and they even have access to a special type of fire called Wizard’s Fire which is this world’s version of Phoenix Flames that’s all-consuming and leaves little traces behind. A sorceress trying to match this would be akin to bringing a candle against a flamethrower.

So what is a Sorceress to do if she wants to excel in the arcane arts? Why a demonic pact, of course. Not just any demonic pact though. It’s not enough to make a contract with this universe’s version of Satan for more power. In order to surpass the limits of her magical chromosomes, the Sorceress musk kill and steal a Wizard’s power, summon a Keeper’s (Satan) servant, transfer the power into said servant, and then proceed to have sex with it. The demon also has a spiked penis, because why the heck not. The soul of the Sorceress is now bound to the Keeper and she has access to Underworld magic as well as the mana of a Wizard to wield it with greater power, huzzah she is equal to a man now. But naturally, they will all be antagonists for most of the story.

It should also be noted that since the nature of magic is different between sexes, magical education should theoretically be divided between sexes as well. In this setting, however, Wizards are very rare and are taught by Sorceresses. Due to the nature of their power, it takes centuries for a Sorceress to teach a Wizard how to wield his magic whereas a Wizard mentor can do more for less. They also keep the men prisoner in their feminist Hogwarts with magic suppressor collars.

The only exceptions are the Witch Women.  These are among the strongest type of spell casters and can even surpass wizards without screwing demons.  But, since we can’t have too many strong females, the Witch Women are special snowflakes who isolate themselves because they can’t help enchanting men and are always conniving and misleading.

Our protagonist, Richard, was subjected to the evil wand of S&M in the first book and we find out how their magic works. To make a Mord-Sith, the military would kidnap kindest and purest girls and torture her into complete submission.  It’s quality over quantity here since the purest girls have the most potential for darkness when they break.  The first milestone is reached when her mother is tortured and killed in front of her to eliminate her compassion.  The final step would be for the girl to kill her own father in order to solidify her resolve. The Aiel they are given upon “graduating” gives pain to both the wielder and victim so a Mord-Sith must be a fortress of mental fortitude without any room for weakness. She can also counter any magic user’s power by capturing magic if used against them. I will admit that the Mord-Sith were great characters even though they had to go through so much just to be able to take down a Wizard. This contrasts another group of female magic users who were born with their powers, the Confessors. 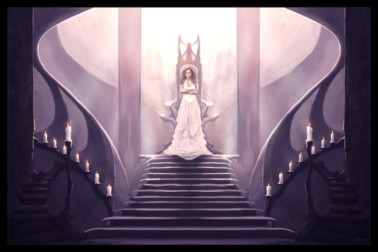 While the Mord-Sith use the power of hate and pain to fuel their magic, the Confessors use the power of love. By amplifying a person’s love, they become a slave to the Confessor and nobody is immune to it, except for our male Mary Sue, Richard. Their power is hereditary so it begs the question, where are the male Confessors? Turns out that male Confessors are significantly more powerful than females since their power needs no time to recover whereas a female Confessor can use their power once every few hours or so. This leads to the male being inevitably corrupted by power and so the Confessors have male infants put to death. Not only are the women weaker once again, but now we have a dash of toxic masculinity here where men can’t even wield an emotion properly. But naturally, the men who can conjure bolts of lightning to decimate armies are somehow not corrupted by power.

This reflects the disappointment I felt when DC Comics introduced the Star Sapphires who also used love as a power source in the Green Lantern series. The only difference was that there’s at east one male star sapphire but usually they’re all women. And they’re mostly antagonistic. It seems a common theme that expressing powerful emotions causes one to be unstable and only women can handle it whereas men need to be bastions of stoicism.

So, in addition to the obvious trope of men being stronger in every form of magic possible, there’s also an overuse of rape that would put Game of Thrones to shame. 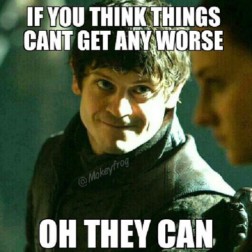 Starting from book 2, there’s a war brewing with an enemy nation and there’s a disgusting amount of time spent describing all the ways women are raped and killed and then had their bodies defiled.

I glossed over these pages since I felt that this was done to show how terrible the enemy was but now it feels like a chore to read a male author using rape to give female characters conflict repeatedly.

Remember our evil feminazi Sorceresses? In the third book, the emperor of the enemy nation overpowered them, because word of god says we can’t have female antagonists without them being overpowered by a man, who then subjects the Sorceresses to sexual slavery.  I wish I could say they become his personal sex slaves.  That would be the least damaging.  Instead, they get passed around between the soldiers of his army, which spans in the millions. You thought Daenerys and Sansa getting raped were bad, multiply that by a few thousand and it seems every prominent female has gone through some sort of trauma and sexual abuse.  All except Kahlan, who is kept pure throughout the series despite many close calls.

Looking back, I realize I was trying to fill the void left when Harry Potter finished and needed something new and magical.  I saw the live action version, Legend of the Seeker, and immediately went to the books since the books were always better but that is not much of a defense, in this case, considering what’s in the books. The one good thing that came out of reading this series was that it taught me a valuable lesson in reading critically. The grand scale of the magic and fantasy elements blinded me to the author inserting his sexism and political views (that’s another can of worms) into his work that detracted from the story, which had potential in the first book.