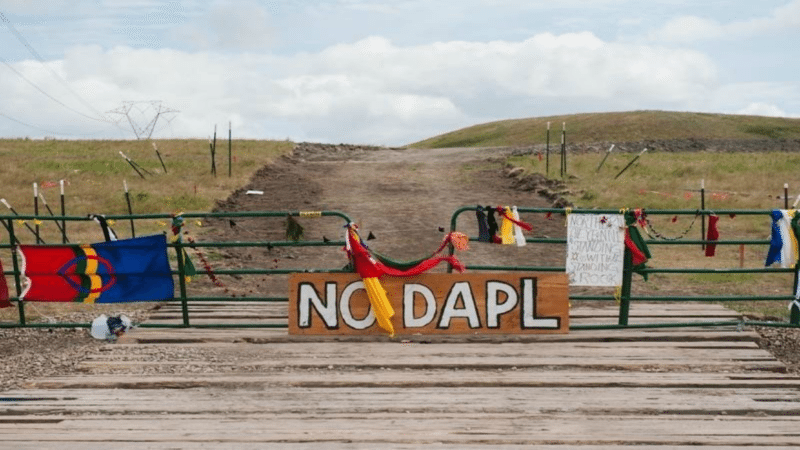 On October 27th, roughly 140 protesters at Standing Rock Reservation in North Dakota were arrested while several hundred more were assaulted with tear gas, rubber bullets, and piercing noise devices. I stood at a Hillary Clinton rally in Kent, Ohio and watched as my Facebook news feed blew up with notifications from my friends who were “checking in” to Standing Rock in a last-ditch effort to protect the protesters and confuse the local police forces.

Among these protesters stood members of the Sioux Nation, environmental activists and celebrities showing their support. This demonstration of unity was held in direct response to the construction of the Dakota Access Pipeline, a 1,170 mile and $3.8 billion project meant to cut costs by carrying 570,000 barrels of oil per day from the Bakken field of North Dakota to pipeline networks and refineries in Illinois. As it stands now, the oil travels by train. 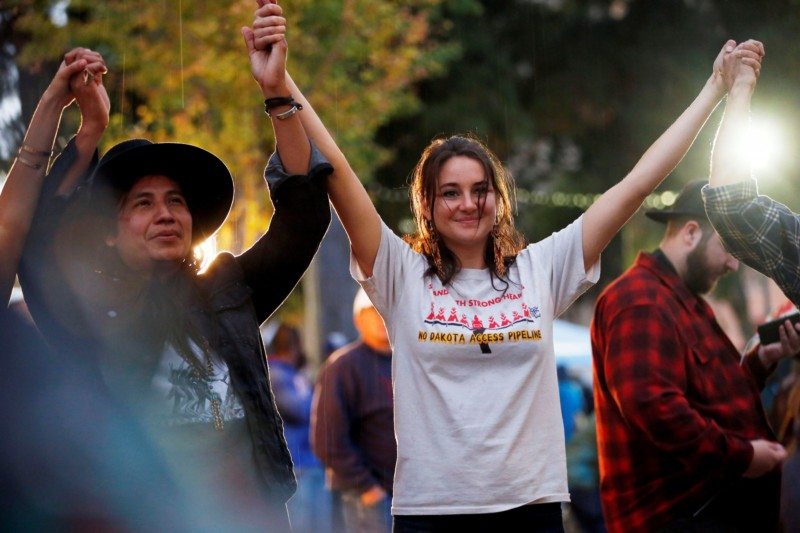 The plans for the pipeline pass less than a mile north of the Standing Rock Sioux reservation, within boundaries agreed upon in an internationally recognized treaty between the United States and the Great Sioux Nation in 1851. The section of land impacted by the pipeline, though largely unoccupied, is home to archaeological and sacred sites such as burial grounds. In addition to disturbing sacred sites, the pipeline is also set to run under a portion of Lake Oahe, a primary source of water for the Sioux nation. Should the pipeline leak or burst, to join the other 2,000 accidents involving oil or petroleum since 1995, it could contaminate the water they depend on. While the safety of their water supply is of utmost importance, this conflict is not just about water. It’s about power. Historically, the United States government has violated treaties to pursue their own self-interests. From the 1970 Nuclear Non-proliferation Treaty to the United Nations Convention of Torture, the federal government has abused their hegemonic position of power when it comes to treaties, and this is no exception.

The 1851 Fort Laramie Treaty, signed by both the U.S government and several native tribes in the Great Plains region, outlined territory for each of the tribes in attendance to end the inter-tribal tension at the time. The original plans for the Dakota Access Pipeline did not pass through any of the Fort Laramie Treaty land and instead passed through the city of Bismarck, North Dakota. The population of the city objected to this original route out of concern for the safety of their water supply. Though when the Army Corps engineers rerouted the pipeline, they failed to consider the impact it may have on the Sioux people. Jesse Jackson, a civil rights activist, called this move “environmental racism”.

READ: Interested in reading more about institutional racism? Check out this article about a display of racism at Kent State University!

Protesters, or “water protectors” as they call themselves, have been active since April, trying to halt the construction of the pipeline. Until the violent confrontation on October 27th, the protests and sit-ins have been nothing but peaceful, with one or two events sprinkled in. As the weeks have passed, the tension between water protectors and law enforcement has grown exponentially. Within the last few days, the chairman of the Standing Rock Sioux Reservation, David Archambault II has called on President Obama to halt the construction for fear that President-Elect Donald Trump will support further construction, as he has invested over $1 million into Energy Transfer Partners, the parent company to Dakota Access who is responsible for the construction of the controversial pipeline. 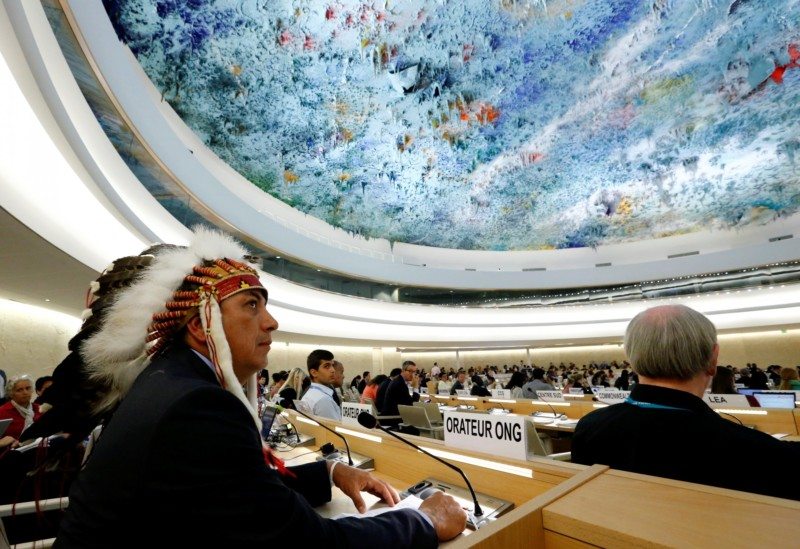 If this conflict were just about water, the Sioux tribe’s concern for their water supply should, in theory, be enough to halt construction for reassessment. But it’s more than just water. The violation of the 1851 Fort Laramie Treaty says far more about respect for native populations and power the federal government and large corporations hold over native people. 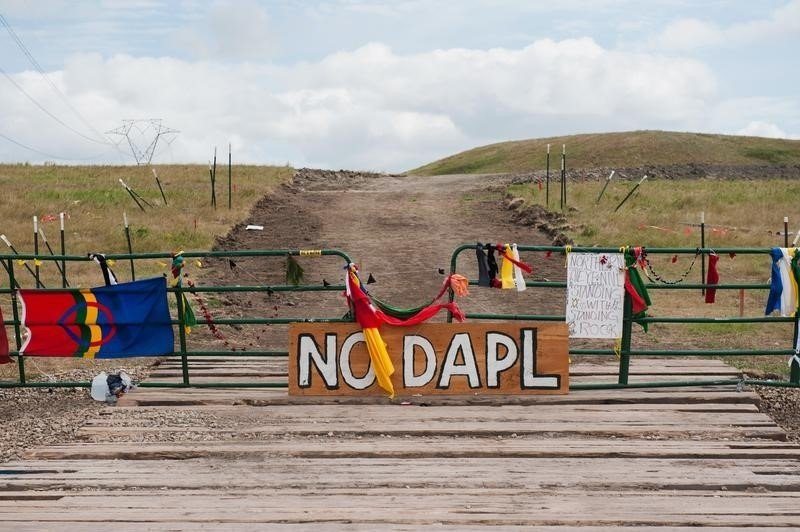 In the United States, the 2 million Natives have the highest poverty rate of any other racial group, nearly doubling the national average. These record-high levels of poverty contribute to higher crime rates, suicide rates, and sexual violence. As of 2011, the suicide rate for Native American men between the ages of 15 and 34 was 1.5 times higher than the national average. Suicide is the second leading cause of death among Natives aged 10 to 34. Gang activity is more prevalent among American Indian youth than Latinx and African American populations. Native American women report being raped two and a half times more than the national average and child abuse rates are twice as high in Native American communities. The socio-economic devastation in Native American communities is not only a result of forced assimilation, war, and mass murder but also a result of current U.S policies, specifically regarding property rights.

READ: Interested in reading about whitewashing and racebending? Check out this article about MARVEL’S DOCTOR STRANGE!

Reservation land is held “in trust” by the U.S government to preserve reservations for indigenous people, meaning they can’t own land and therefore can’t build equity. This allows the federal government to micromanage these communities. Many tribal members between the ages of 18 and 40 do not have homes because they can’t afford to build homes and cannot get mortgages. While they hold a certain percentage of land, they cannot buy or sell it, making it “dead capital”, as Hernando de Soto, an economist, has named it. Denying American Indians property rights makes them not only the most impoverished race in the nation but also the most regulated.

The Dakota Access Pipeline is only one example of the federal government and large corporations exercising their power over Native American communities. Like other social movements, all it takes is one person saying, “we’ve had enough” for change to be made. What started as a water issue in Standing Rock has turned into a stand-off between water protectors and law enforcement that will only continue to escalate as construction continues. This conflict may just be the straw that breaks the camel’s back when it comes to U.S-Reservation relations.