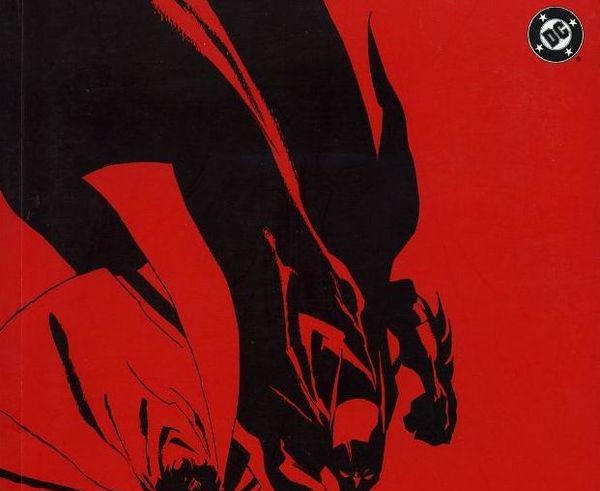 ComicsVerse recently explored the depths of Jeph Loeb’s BATMAN: THE LONG HALLOWEEN, a personal favorite of this author.  To continue our adventure through Loeb’s incredible writing, we’ll now be examining the first graphic novel that this author ever read- the sequel to THE LONG HALLOWEEN, the phenomenal DARK VICTORY.  Continuing the story of THE LONG HALLOWEEN, DARK VICTORY extends the plot and shows us the logical conclusion to Gotham’s crime family problem.  It starts on a hot night (but not as hot as the night Johnny Viti got married in LONG HALLOWEEN, Catwoman is quick to remind us) and ends with an empire on fire.  Along the way, Batman finds that, though he lost an ally in Harvey Dent, help can be found where you least expect it.

As was the case with THE LONG HALLOWEEN, Loeb continues to explore one of the most interesting relationships in the DC Universe- that of Two-Face, Commissioner Gordon, and Batman.  Through the events of THE LONG HALLOWEEN, we were able to see that the trio already saw justice very differently- Gordon believing in the power of the law, Batman believing in a much more physical form of justice, and Dent ultimately proving that he wasn’t afraid to take a life in the name of the greater good.  It’s an interesting way to see the same goal through three very different points of view.  None of these three characters has ever truly seen eye to eye- even Batman and Gordon have had their share of squabbles- so seeing that dynamic played on the same side of a fight was cool to see. 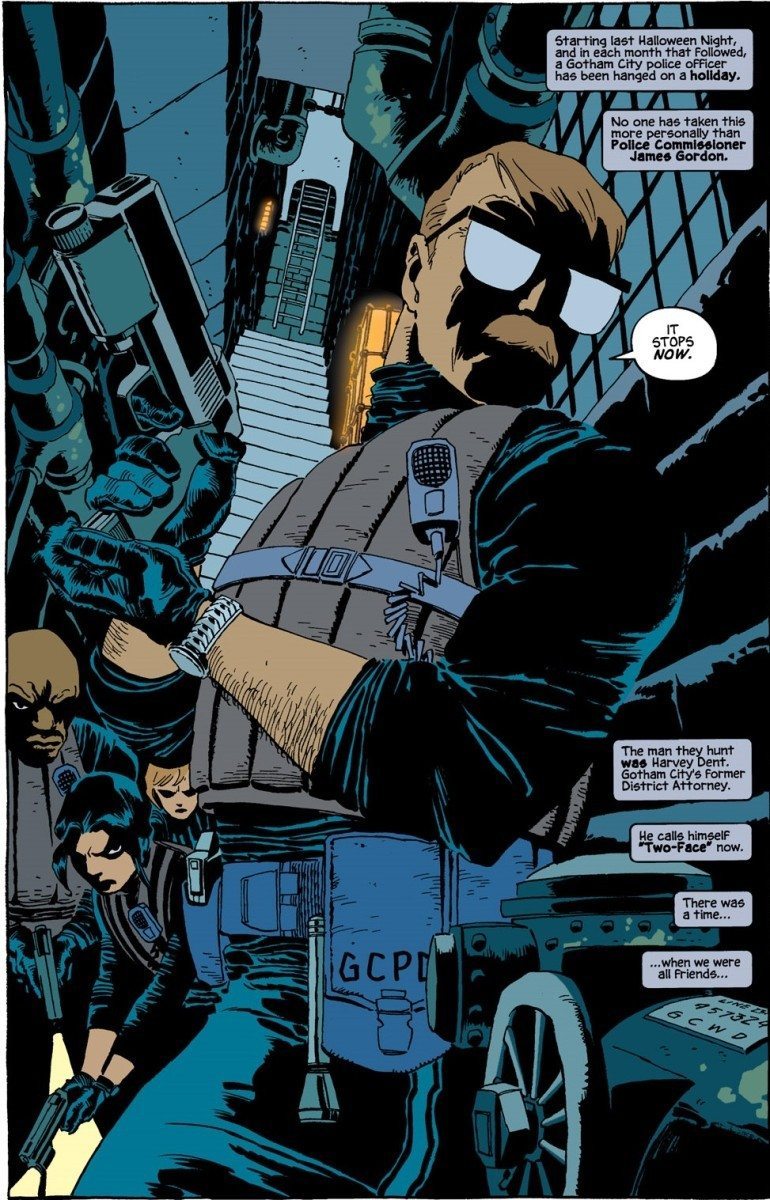 DARK VICTORY extends the friendship that exists between Harvey, Batman, and Gordon.  He goes so far as to save Gordon’s life at one point- though, it could be argued that he was doing this out of his own self-interest.  This is really the one bright side of the friendship throughout the book- at this point, there is very little of Harvey remaining, which is made very clear during the villains’ mock-trial, where Two-Face insists on being addressed correctly.  Though Batman believes in Harvey Dent and ultimately saves him, Two-Face uses his final moments in the book to kill off the Hangman, ending the Gotham Crime Families once and for all.

This murder accomplishes exactly what Gordon, Batman, and Harvey set out to do, but in a way that no one would have originally wanted.  It’s a fitting end to the storyline, however, bringing closure to the relationship of the trio, as well as to their mission.

CLICK: A third chapter in THE DARK KNIGHT RETURNS series?

For much of this book, Batman is reeling from the loss of his friend, Harvey Dent, to his darker persona, Two-Face.  Batman is unwilling or unable to see that Dent (and his wife, Gilda) were both tied into the Holiday killings, and were, in fact, both Holiday killers.  This idea casts a new light on Alberto Falcone’s innocence- more on that later.

During this book, Batman gains a new ally in his fight for justice- a young acrobat named Dick Grayson.  As we watch the Gotham crime family try to expand and hold on to any power in Gotham, they kill the flying Graysons in a power move.  Dick is adopted by Bruce, and eventually tries to get revenge.  He ultimately is told that Bruce is Batman when Batman saves him from certain death as his plans go awry. 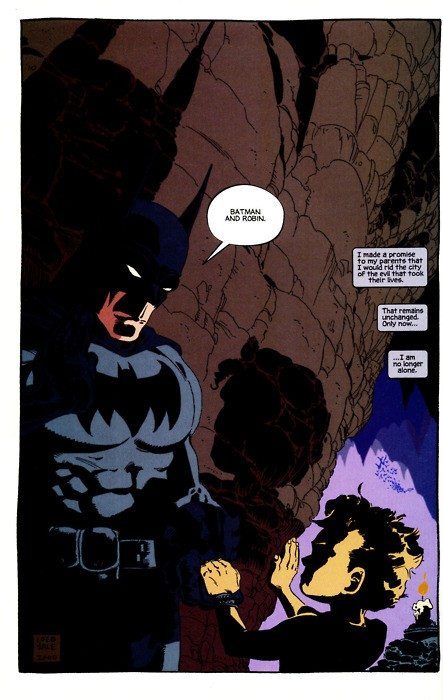 Robin is obviously a much more youthful and exuberant partner than Bruce has had up to this point, and manages to provide Batman with a crucial clue, one which he had overlooked.  This ends up being the clue that unravels the whole conspiracy.

Unfortunately, Robin is absent from most of the book, but he certainly does prove his worth.  The end of the Gotham crime families also means the beginning of a new era, and this is signified so well in the final panels of Robin swearing an oath as Batman’s new apprentice.

READ: Is Joker in love with Batman?

The Rogues Gallery Takes a Backseat

One of the best things about this story, for me, is that it isn’t your typical Batman-vs-supervillain story.  This is a story that focuses on the meat and grit of Gotham.  We spend the book tracking down a cop-killer called The Hangman- so named for the cryptic unfinished games of ‘hangman’ that are left behind at the scenes of the crime.  For a while, Two-Face is suspected of being the hangman, as these clues are written on documents associated with Dent’s time as D.A.- specifically the Holiday case from THE LONG HALLOWEEN.

The majority of Batman’s rogues gallery serve as distractions for Batman while the Hangman goes about killing off cops.  In typical Jeph Loeb style, a meticulous web is woven between the various villains, connecting them all in a plot contrived by Two-Face to prove his innocence and destroy the crime families.  Other than being used by Two-Face in a few key scenes- the escape from Arkham, the trials, the murders of the crime families, and the final battle in the Batcave- there isn’t much purpose to the villains.  It was interesting to see them take a backseat to the more mundane types of criminal (mundane when compared with supervillains, that is). 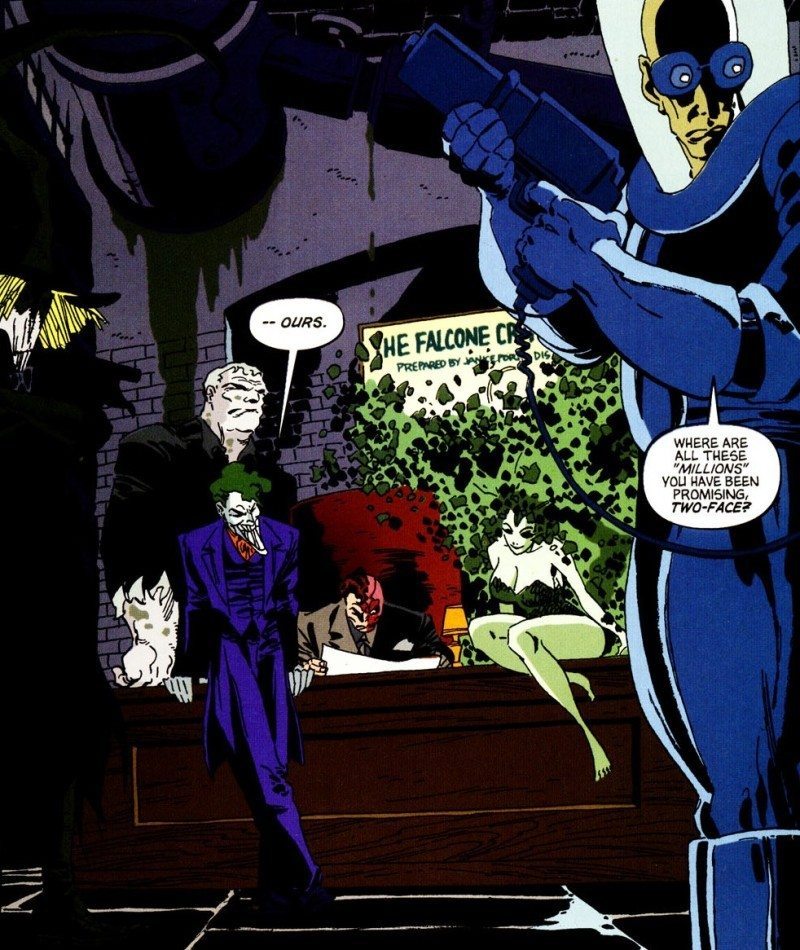 At it’s heart, this story is about Gotham’s transition from pre- to post- Batman, as were both YEAR ONE and THE LONG HALLOWEEN.  This ties those books together so well that you have to understand exactly why the typical rogues are not the focus of these books.

YEAR ONE gave us a Batman who needed Jim Gordon to help him clean up the police force so they could begin tackling Gotham’s organized crime problem.  LONG HALLOWEEN gave us Batman, Dent, and Gordon, together trying to take down organized crime through legal means, while a shadowy Holiday killer did their job through much less legal means.  DARK VICTORY shows us the ultimate end of the Gotham crime families- and outside of Two-Face, there’s no real need for any other villains.

A Supervillain for a Regular Crime

The dynamic between the supervillains and the crime families is one of the most interesting things explored in LONG HALLOWEEN and DARK VICTORY.  The crime family despises the “freaks”, and the supervillains don’t have much respect for the mafia.  Nonetheless, the Falcone family discovers themselves walking the line between Falcone and “freak” throughout the series.

Alberto was arrested for being Holiday, the villain who killed off various members of the Gotham crime families in LONG HALLOWEEN.  However, the full extent of his involvement is unclear.  Two-Face was also one of the Holiday killers, as was Gilda Dent.  Calendar Man doesn’t know all of this, but he knows enough to attack Alberto and wound him. 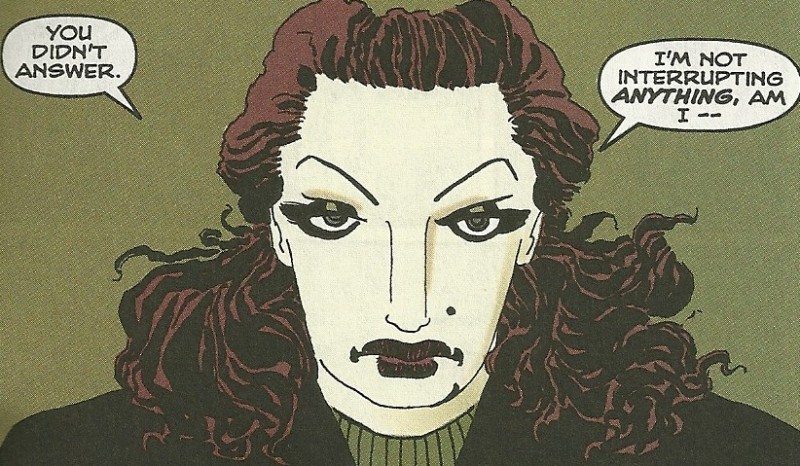 The remaining crime family members are killed by Two-Face and the other Arkham escapees in one violent swing.  This leaves behind only Alberto, Sofia, and Mario, the three Falcone siblings- and Sofia quickly sees to the death of Alberto.  It is at this point that the pieces all fall into place- Sofia is the Hangman, becoming one of the “freaks” in an attempt to get revenge on Harvey Dent and all the cops that helped him in the Holiday case- a case that ultimately led to the death of her father, Carmine.  Sofia’s transformation is tragic and horrifying, and it is matched only by the depth of her rage.  Her greatest strength was in getting everyone else to overlook her as a possible suspect by pretending she was paralyzed- no easy feat.

Her scheme almost succeeds but for Batman’s interference- he saves Harvey, who in turn kills Sofia.  All that is left of the Gotham crime families is Mario Falcone, a haunted and broken man.

CLICK: Check out our thoughts on ALL-STAR BATMAN AND ROBIN!

Fathers and the Fatherless

In DARK VICTORY, one of the major recurring themes is the relationship between fathers and their offspring.  Bruce, obviously, has no father, and so it is interesting to see him struggle to become a father to Dick Grayson, whose tragic loss parallels Bruce’s own- there’s a sequence dedicated to this parallel that is really beautiful.  Bruce has only a vague notion of who his father was from his earliest years, but his memories are powerful.  He was also raised on the morals and guidance of Alfred, who is a second father to him.  Bruce strives to be a good son and a good father, but doesn’t know how exactly to do this.  It makes a lot of sense that he connects to Dick better as Batman than as Bruce- Batman is who he truly is, and the only way he can be the confident leader that a father needs to be is as Batman. 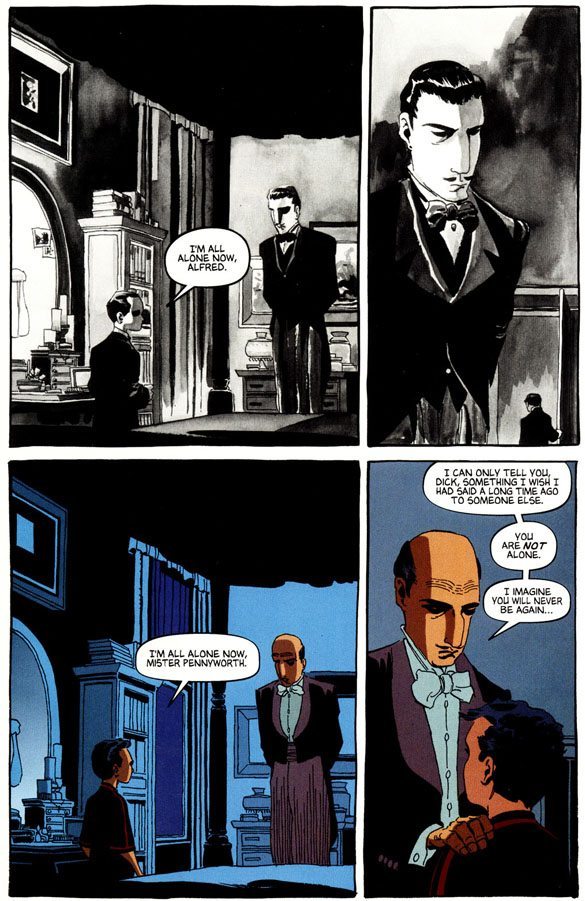 Bruce and Dick aren’t the only ones struggling with daddy issues.  Sofia has sliced her face in an attempt to continue her father’s legacy outside of mere crime- all she ever wanted, though she was not beautiful and was called a “freak”, was her father’s love.

It becomes clear, when comparing Selina and Sofia to Bruce and Dick, that the author is trying to demonstrate the power that a father has on his child- neglect and love can both go a long way when it comes to the development of children.  This idea is explored further in many other Batman stories, but there’s another Jeph Loeb and Tim Sale spin-off which takes place during DARK VICTORY, and shows what Catwoman was up to while she was missing.  It’s called CATWOMAN: WHEN IN ROME, and is definitely worth reading.

LISTEN: Our podcast about another Jeph Loeb Batman story: HUSH!

With so much to discuss, it’s hard to explore any work fully.  DARK VICTORY, with the intricate plots and conspiracies, offers up a great challenge at first, but it is easily one of the best books about Batman’s early years.  If you get the chance to read YEAR ONE, LONG HALLOWEEN, and DARK VICTORY back to back, then do it- it’s really quite a treat, and is a great introduction to Batman and his world.