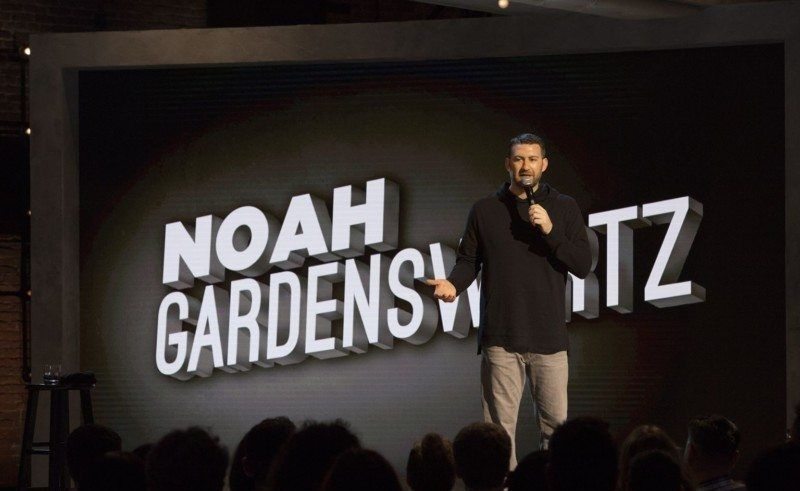 Noah Gardenswartz has taken the dog days of August by storm. He had his first televised appearance on CONAN, dropped his debut album BLUNT on the 26th, which also aired on Comedy Central’s THE HALF HOUR, and will be appearing on TruTv’s COMEDY KNOCKOUT. We got the pleasure to talk to him about his start and possible future!

Check out his stand-up special on Comedy Central’s website!

ComicsVerse: Every comic has their path to stand-up. What’s yours and how did your childhood influence that path?

Noah Gardenswartz: My path to stand-up was really an indirect one. I grew up loving stand-up – we even used to watch HBO’s “Def Comedy Jam” as a family- but I never actually dreamed of becoming a comedian and I never thought I would be. I was always into creative writing of all kinds, and my senior year in college as a sociology major with no job prospects upon graduating, I started writing jokes and trying them out at open mics. When I originally started, I just wanted another comic to see me and ask me to write for them, but eventually, I got comfortable on stage doing my own jokes and it all went from there.

CV: What comic has influenced you the most? Did anyone become a mentor?

Noah Gardenswartz: My favorite three comics of all time are Dave Chappelle, Chris Rock, and Mitch Hedberg, and I grew up watching Carlin and Seinfeld. I was also an instant fan of Demetri Martin and Tig Notaro as soon as I heard them. I’ve been influenced by all of them in so many different ways, but oddly enough I don’t think my stand up is like any of theirs. I’d hope to borrow tiny things from all of them that combine to create a style that’s unique to me, but they were all definitely huge influences with respect to just refining my comedy palate and making me fall in love with the art form. I haven’t had one main comedy mentor, but I’ve been very fortunate to have a lot of older comics that were good to me early on and taught me about working the road and writing consistently.

Watch: Check out our interview with Dan Dougherty, creator of webcomic BEARDO!

CV: Comedy is a risky venture, especially in this era of society. How do you balance jokes without coming across as offensive?

Noah Gardenswartz: I don’t typically write things with the potential to offend, not because I want to avoid offending people, but because most of my comedy comes from my real life. I’m not offering political opinions or telling people what they should or shouldn’t do, say, or think, I’m just sharing my stories and my perspective. Since most of my jokes are from actual things that happened to me, they’re rooted in truth, and I find that people are less offended by personal truths. That said, if someone was offended by something I said, it wouldn’t bother me much, they’re entitled to their opinion and I’m entitled to my voice.

CV: What kind of comedy do you gravitate towards as a listener and performer?

Noah Gardenswartz: I gravitate to well-written, thoughtful comedy as a listener and performer. I’m not a big fan of physical comedy. Not to say that it’s bad or I don’t get an occasional laugh from it, but typically, if the laughs come from a funny face or a physical movement, it won’t interest me much. I love really smart comedy, and also really silly comedy. Joe List is one of my favorite comics, and I think his act is a perfect mix of silly, smart jokes.

CV: I saw your spot on Conan, which was fantastic, and you used a range of self-deprecation, relationship humor, and friendship ball-busting. Is your act typically that diverse or does your longer sets have a specific theme some comedians go for?

Noah Gardenswartz: My act typically flows much smoother from one joke to the next so it doesn’t seem like such a stark change in topic. I spend a lot of time working on smooth transitions in and out of jokes that just don’t naturally lend themselves to a five minute TV set, but I do pride myself on having a diverse act in terms of topics covered and comedic styles used.

CV: Speaking of Conan, what was that experience like? When I was able to go as an audience member, Andy and Conan roasted me and the orange suit I wore. It was everything I could ask for. Was that a dream come true? How did you prepare for it, being your first televised appearance?

Noah Gardenswartz: Honestly, the Conan experience was amazing, but only after it was done. Performing on Conan was such a huge, looming personal goal of mine for so many years that I couldn’t enjoy it in the moment because I was so worried about it going well. I was more nervous doing Conan than I was recording my album or my special. Conan was unbelievably nice, and looking back the accomplishment means the world to me – but I’d be lying if I said I had fun as it was happening.

CV: I love comedians that make audience members uncomfortable in a variety of different ways whether it be Eric Andre’s insanity, Bill Burr’s blunt offensiveness, or even Conan’s awkward flirtations. Does your act incorporate any of these uncomfortable situations or have you encountered it unintentionally? How do you respond or view these moments

Noah Gardenswartz: Again, going back to my lack of offensive material, I don’t encounter a lot of uncomfortable situations on stage. I have a really laid-back demeanor which tends to put audiences at ease with me and my material. But, because my act is such an honest reflection of who I really am, when the crowd isn’t on board it doesn’t feel like they’re saying they don’t like my comedy, it feels like they’re saying they don’t like me – at my essence. That can be uncomfortable, but when that happens I view it as an opportunity to work on my craft, and see if I can eventually get them on board with my style. I don’t really change what I do during uncomfortable situations, though. I’d rather bomb being myself than do well telling the kind of jokes I don’t want to tell.

CV: What’s the most rewarding aspect of Stand-Up?

Noah Gardenswartz: The most rewarding aspect of stand-up is the laughter. That’s honesty all it’s about. TV credits are cool, and making enough money to pay the bills is a wonderful feeling, but at the end of the day, there’s nothing more rewarding than having an idea that becomes a joke that becomes a laugh. There’s nothing like it.

CV: What are the downfalls?

Noah Gardenswartz: The downfalls are all the standard issue pain that comes with living your life as an artist – you don’t have a normal schedule which can affect your personal relationships, your financial future is unpredictable at best, you live in a state of frequent rejection and self-doubt, many of your hours are thankless and unpaid, and there’s no guarantee that your next great joke will ever come. That said, I wouldn’t trade it for the world. I love stand-up for so many reasons, including all of the downfalls I just named. The pain that comes with this job is part of why I love this job. It’s real, earned pain.

CV: As you become more successful where do you see yourself hopefully branching out? What’s your ultimate goal?

Noah Gardenswartz: I’d love to branch out into TV writing and just growing my audience and fan base so I can continue to travel and do stand-up at a high level. My ultimate goal is to be considered amongst the greats, I’d love to be one of the best stand-up comedians that ever lived, but that’s not a realistic goal you can strive for – you just have to put in the work and hope it happens. So in the meantime, my goal has to be just to keep writing more, getting funnier every day, and hope that everything else falls into.