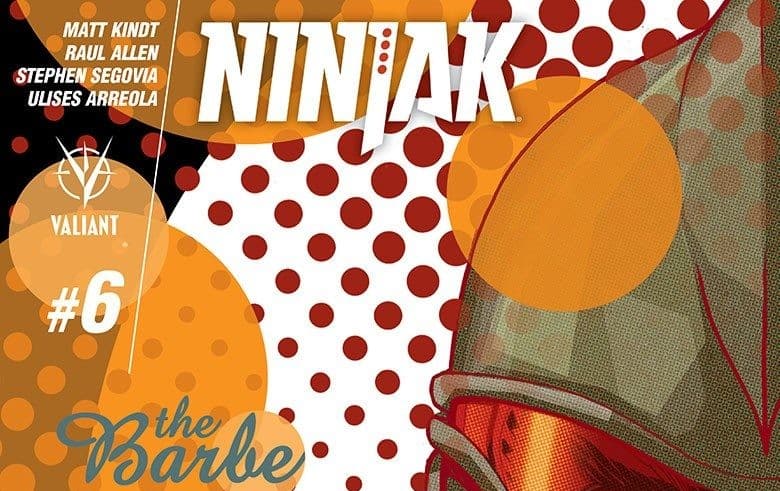 Hi everyone, and welcome to another week in Valiant comics. It’s a light week, especially after the weight of last time’s BOOK OF DEATH. NINJAK starts a new arc, continuing to emphasize the best James Bond and Batman aspects of the character, in addition to a BOOK OF DEATH tie-in that posits a potential future for the assassin, while the (sort of) crossover DEAD DROP concludes. Overall it’s a pretty good week for Valiant, with some standout art on NINJAK and pretty interesting plotting throughout. Here we go!

I’m not sure if I’ve gone too in-depth with my interest in this title, so here we go: NINJAK is great. Kindt has managed to take the most complimentary elements of Batman and James Bond and form something exciting and new in a similar tradition. The first arc featured the titular hero/assassin/secret agent infiltrating the ranks of Weaponeer, the world’s largest supplier of weapons to criminal. They are led by the mysterious Shadow Seven, a cadre of supervillains who seemingly run the world’s criminal empires. Or maybe Shadow Six now: in the last issue Ninjak took out Kannon, the CEO of Weaponeer and member of the Shadow Seven, and sent his dismembered (though living) body to MI-6. We pick up two months later: Ninjak is in deep cover after Kannon’s defeat, and has assumed control of Weaponeer. This issue showcases Ninjak’s attempts to bring the organization down from the inside, sabotage its customers, and hunt down the Shadow Seven one by one. His intel has led him to his first target, the technomancer La Barbe.

Ninjak’s new connections have enabled him to easily (for Ninjak) get close to La Barbe, though his confrontation doesn’t go as planned. Ninjak’s reliance on tech has been shown throughout this series, UNITY, X-O MANOWAR and generally all of his appearances, and it seems to come to a point here, as La Barbe takes over his many appliances and forces Ninjak to recall his training and fight him bare handed (and barefoot!). Their confrontation is quite interesting, and shows another side of Ninjak as he faces La barbe, who proves to be a very strange villain. If the rest of the Shadow Seven are anything like Kannon and La Barbe, this arc should continue to be wild all the way to the end.

READ: Check out Tom’s review of SHERLOCK HOLMES: THE SEVEN PER-CENT SOLUTION for a different kind of British detective!

Ninjak’s training is alluded to in the backup story, where he attempts to infiltrate a terrorist training camp only to find it contains ninjas, or something like it. If I have one complaint with this issue it’s that this backup feels a bit brief, though I do seeing the growth of Ninjak and Neville’s relationship.

I love Raul Allen’s art. I loved it in the last issue of BLOODSHOT REBORN, all of his great covers, and I cannot wait for WRATH OF THE ETERNAL WARRIOR in November. He has exceptionally clean and vibrant paneling, and a great handle on action scenes. In fact, I think he spoiled for me the otherwise pretty good art in other comics this week! In any case, I’m glad to see him here and I think he’s a great addition to Valiant. Segovia is pretty similar to Guice, so the switch in these backups has not been too jarring. Again, I think it fits the narrative and I particularly like his landscapes.

Continuing with the theme of abandoning technology, we find Ninjak living with an amount of difficulty in the future. He is bald, and his left arm seems to be a sword-wielding skeletal appendage that he is controlling with his mind, presumably. He’s abolished any technology from his repertoire, building on his near-defeat by The Barbe in this week’s other title. Ninjak has returned to basics, and adopted a “warrior monk” lifestyle, which is pirmary in this issue’s conflict. Most of the issue is framed with a discussion between Ninjak and “Livewire,” or whatever is left of her following her death during one of the cataclysmic events that seem to be near-constant in the time period between the BOOK OF DEATH miniseries and these FALL OF… tie-ins. Kindt uses this comic as an opportunity to introduce elements present in his other Valiant comic, RAI.

“Livewire” reveals that she has a plan to shoot Tokyo into space to create Neo Tokyo, as seen in RAI, and has come to Ninjak to ask him along as a courtesy. We find out that amidst several events–the Fitz Uprising and the Second Armor Wars paramount among them–Ninjak’s allies in Unity have been killed, lost, or altered. The former Livewire seems to be some sort of clone of the original, who died “during the Harbinger Trials,” another unseen event. Future-tease comics always seem to include these events that we may or may not ever see, and I often appreciate the images that these can conjure. “What? The Harbinger Trials? That sounds great!” I may think, but there’s a good chance they will never appear. The multitude of different time periods and time travel in Valiant titles (eespecially lately) has made the timeline a bit fuzzy. And this isn’t even IVAR, TIMEWALKER!

Naturally, Ninjak rejects the false Livewire’s invitation and sets his Spylockes (another nod to RAI) after her, while he and the massive robot Gin-GR, his last remaining Unity ally, attempt to destroy Neo Tokyo and save the world from its inevitable destruction of Earth’s ecosystem. As one can imagine–this book is called the FALL OF NINJAK after all–it doesn’t go very well. This is something you can surmise from having read RAI as well, as Neo Tokyo is its setting.

These FALL OF… books remind me of DC’s recent FUTURE’S END event and tie-ins. They show a future that has greatly changed the main character and reference multiple events that the reader has not seen in order to heighten this future continuity. I think, however, that Valiant has been able to do a much more interesting job and keep my attention better than most of DC’s titles (other than the SWAMP THING tie-in, which was wonderful). Again, their importance on continuity and their relatively small amount of tie-ins emphasizes their impact and importance. All of the FUTURE’S END tie-ins seemed like filler, while these seem almost prophetic, especially in comparison. Kindt’s great mind for story ideas is apparent here, as he builds a lush world around the future Ninjak and ties his fall to RAI fairly well. Hairsine, Winn, and Passalaqua’s art is effective here, and follows the Valiant style very well. I really like Future Ninjak’s design. Personally, however, I was still coming off of my excitement with Allen’s work from the other Ninjak title this week, as that sort of flat, painterly style fits my tastes a bit more.

All of DEAD DROP’s plot points converge in this issue. I have mixed feelings about the series. There are a lot of interesting ideas at play. I love the map of Manhattan and the awareness of the city as a participant (of sorts) in the story,  and the different perspectives throughout the series (X-O, Archer, Beta-Max and finally Detective Cejudo) are refreshing for a crossover. The structure is overall pretty interesting, and at four issues it is not decompressed too badly. The choice to include Beta-Max and Cejudo is pretty odd–two minor characters from Quantum and Woody? Kot uses them well, and I much prefer that actually to his approaches to Aric, Archer, and even Neville Alcott, which I found didn’t match their previous depictions. It took me out of the book actually, in parts, and I found their dialogue unfitting, almost parodic. Archer specifically seemed like a broad, one-note version of the character. While it is obviously difficult to utilize a character in (mostly) a single issue, Archer’s simple attitude was exaggerated a bit too far.

This issue concludes the crossover, wherein Detective Cejudo tracks down the stolen virus and saves the infected Aric, Archer, and everyone living on Earth, apparently, if Neville’s alien impostor was to be believed. Cejudo takes him out too–apparently he wanted to destroy the virus and die all along. Everything in this crossover tied up very neatly. All in all, I would consider Dead Drop a fine arc, if inconsequential. And not all comics need to be consequential. I did like the art very much–Gorham and Spicer remind me of Jeff Lemire or Guy Davis, but a bit more restrained, and the inking was wonderful. I’d love to see them on another of Valiant’s humor comics, perhaps a resurgence of Archer & Armstrong or Quantum & Woody.

IMPERIUM #8 continues Harada’s confrontation with the nigh-omnipotent Divinity, while X-O MANOWAR #40 expands on the fallout of GATE’s attack on the Vine refugees. These are two of Valiant’s longest-running threads–Harada’s quest for power and Aric’s tenuous relationship with the worlds’ military and various aliens–and they keep building in a way that DC or Marvel cannot. See you next week!