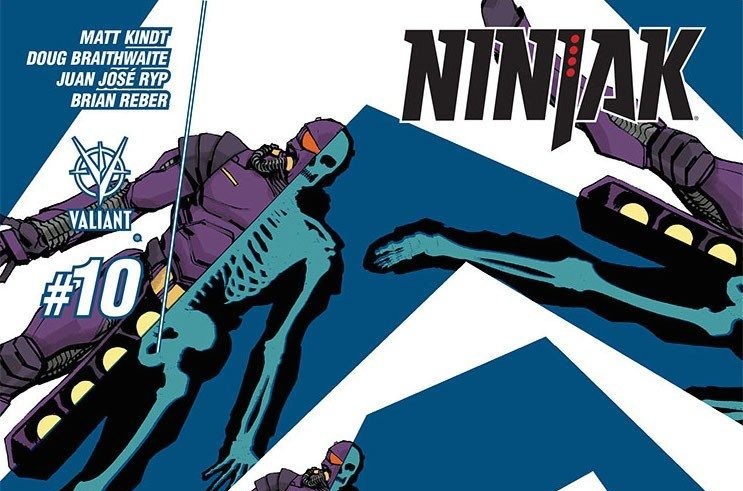 An ending and a beginning in today’s comics, both of which impress in significantly different manners. NINJAK returns to the world of SHADOWMAN for a genre-twisting arc, while UNITY closes a strong 25-issue run on several humorous (and a few poignant) notes.

NINJAK introduces a lot of elements here, as Ninjak joins SHADOWMAN’s Punk Mambo for a trip into the Deadside. One of my favorite tropes involves capable characters’ hatred of the unknown, and Ninjak’s attitude toward the Deadside reflects that throughout this issue (and presumably the rest of the arc).

Like most Valiant arcs, this could be picked up fresh, though it does follow up on some elements from Ninjak’s recent takedown of the Shadow Seven. Narration from MI-6 Super-organizer Neville Alcott indicates that, several weeks following the last arc’s conclusion, the captive Shadow Seven member Fakir was captured by a mysterious, hammer-wielding being from the Deadside who razed a block in London and stole off to the Deadside. Twenty of MI-6’s best agents followed, and promptly died (or went missing, maybe), leaving Neville to seek Ninjak’s help.

READ: Check out our review of THE VIOLENT #1!

Ninjak’s attitude is wonderful. He’s a strong character, as his experiences in this title and its backups have led me to understand that the Deadside is something truly menacing. I am not particularly familiar with SHADOWMAN, though I did like the recent concept album and Master Darque’s appearances in BOOK OF DEATH. Additionally, Doctor Mirage’s recent venture to the Deadside was appropriately terrifying, and Ninjak and Punk Mambo’s turbulent rescue mission is weighty enough for this arc to really mean something. 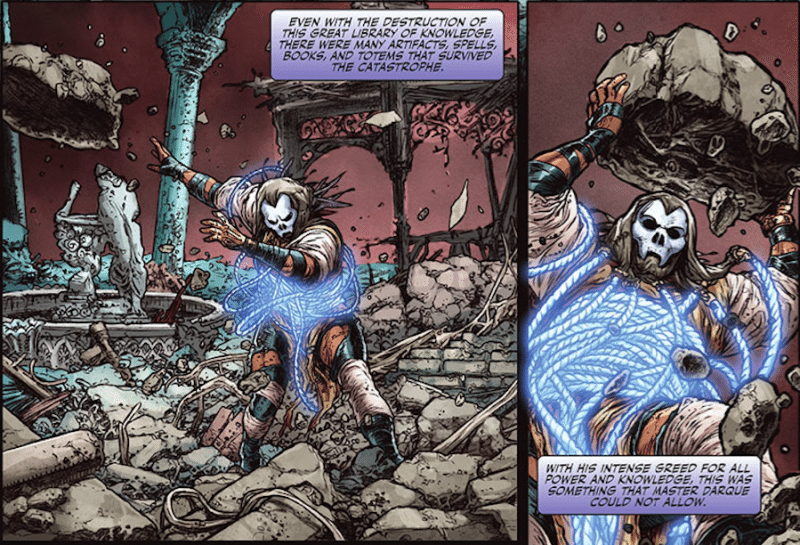 Braithwaite’s art is fit for this title, as he and Brian Reber deftly move between reality and Deadside in two separate looks. Deadside’s Shambhala looks like Manhattan covered in ghosts, while the creatures faced by the mismatched duo are disparate in design and enhance the overwhelming weirdness of the dimension. Juan José Ryp’s elaborate pencils highlight a backup story about “The Magpie,” and he brings exactly the same awesome details that he did to BOOK OF DEATH: LEGEND OF THE GEOMANCER and NINJAK’s previous backups.

Lack of glow-in-the-dark covers aside, this is shaping up to be one of my favorite arcs of NINJAK. I can’t wait to see what happens to the titular hero as he and Punk Mambo get lost in the Deadside and, presumably, face Fakir and the Hammer guy. Between this arc, the upcoming “The Kill List” in X-O MANOWAR, and BLOODSHOT REBORN’s “The Analog Man,” Ninjak is getting even more exposure than usual, and I couldn’t be happier.

It’s always sad to see a comic go, but at least Unity went out on its own terms. And in the process, it introduced something that I think could be a real benefit to Valiant’s publishing line. 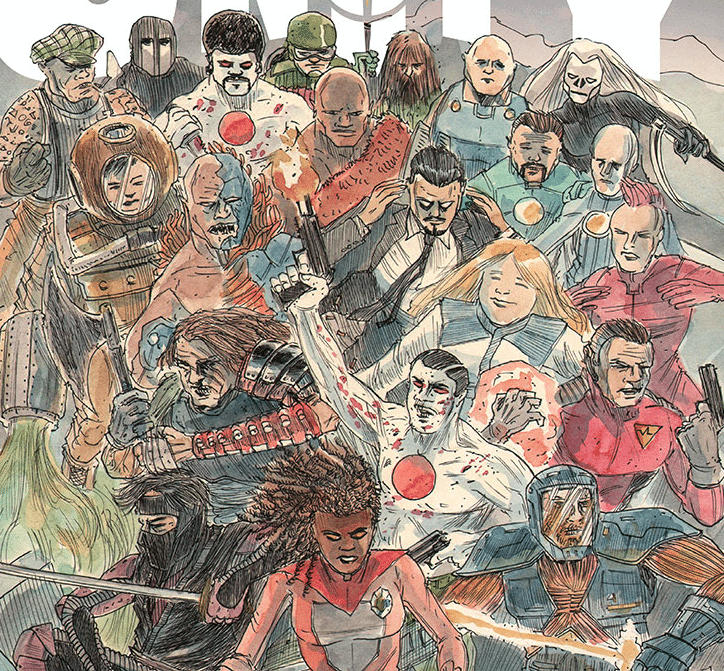 This issue, UNITY’s last, is structured through the eyes of Quantum and Woody, Valiant’s premier team of lovable losers. The duo pitches their “adventures” with Unity to Hollywood executives, which are shown by a plethora of different writers and artists, many of whom are well-known in Indie circles and still more who have worked for Valiant in the past, including James Asmus, Kano, Pere Perez, and Matt Kindt.

Quantum and Woody’s stories—well, they’re mostly Woody’s stories, as Quantum’s misadventures during the time involve accidental indecent exposure—allow these creators to play around in the Valiant universe and explore some of the weirdness inherent in superheroes. These include a pun-filled jaunt through alternate realities by Michael Kupperman, a few hilarious PSAs by Daniel Kibblesmith and Karl Moline, and a failed Unity recruitment drive by Elliott Kalan and Kano.

READ: Our perspective on MONSTRESS!

It’s a great relief to read these stories, and it makes me yearn for some sort of quarterly Valiant title that could allow creators to do similar things in the future. I love DARK HORSE PRESENTS, Image’s ISLAND, and much of Vertigo’s recent CMYK series, and I think Valiant could have something just as good with an ongoing UNITY-style series that explores the Valiant universe through this lens. Kalan and Kano’s story was particularly invigorating, and Valiant (and every other company, for that matter) could use some humor now and then, particularly with the upcoming end of IVAR, TIMEWALKER and an unfortunate lack of Quantum and Woody. On that note, it was excellent to see them back, and in the hands of James Asmus. 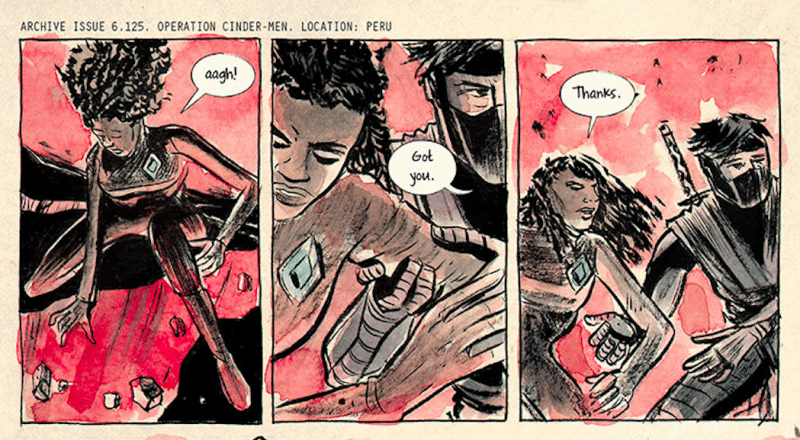 The final story in UNITY #25 is all Matt Kindt and Livewire. He explores her character through her interactions with the rest of her team and really examines what makes her unique. Livewire’s tumultuous past with Harada, along with her strong feelings for her teammates and the universe, are brought to life with Kindt’s strong words and exceptionally appropriate art. Kindt’s art worked like a dream on MIND MGMT, and it fits here where it might not in some of his other titles. It’s a lot like Jeff Lemire’s art—great, though not always apt for the story. This emotional affair closed out UNITY on a high note. I hope Kindt is able to use Livewire in the future, in whatever form possible. She’s the only Unity member without a solo title to return to, after all.

UNITY was generally a supporting series in the Valiant universe, but it brought us great characters in Livewire, GIN-GR, and showed us a sense of cohesion in the universe that is vital to its success. I would love to see it continue in an anthology format similar to this issue, and I hope Valiant feels the same.

Another big week for Valiant, as WRATH OF THE ETERNAL WARRIOR #2 takes Gilad deeper into Hell as his quest to protect the Geomancer continues, even in death. We also have IMPERIUM #11, which promises a thrilling encounter between Harada and the Vine. Most bittersweet, however, is the final issue of IVAR, TIMEWALKER with #12. I’ll miss Ivar, but I’m thrilled to see the run end in what can only be a high note. I can’t wait; see you then!